It was early 1952 when Mercedes-Benz was in the midst of developing the 300SL sports car.  The skeletal frame, drivetrain and suspension were beautifully engineered masterpieces. However, the original form-follows-function body looked like a half-used bar of soap with a cap stuck on top. Let’s say that in this post-WWII era of rebuilding, there wasn’t much of a design department at Mercedes-Benz that the company could turn to.

Meanwhile, in the United States, the big three auto giants–General Motors, Ford, and Chrysler–employed large staffs of very talented designers that could probably have given Mercedes-Benz some really splendid designs. Besides the big three, there was Packard, Nash, Hudson, Studebaker, and even Kaiser-Frazer–each of those automakers had modest design departments that were staffed by highly talented designers. So, what if Mercedes-Benz management had looked to American shores for styling help, and gave each U.S. company’s designers a crack at the 300 SL design?  The results might have looked something like my “what-if?” illustrations below. 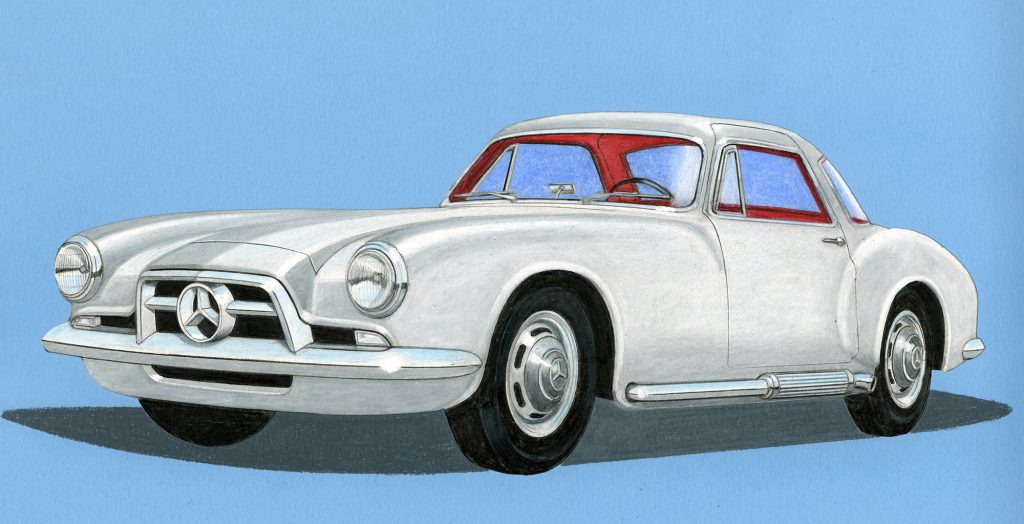 Without a suitable platform on which to base a 300 SL-sized vehicle, Chrysler design chief Virgil Exner would have probably sent a shortened Chrysler frame to Ghia, his favorite Italian coachbuilding firm.  I’ve heard that Exner’s favorite Ghia-built custom was the 50s DeSoto Adventurer, so that is what I based my design on.  The only Mercedes-Benz touches on this design are the 3-pointed star and the wheels and hub caps. 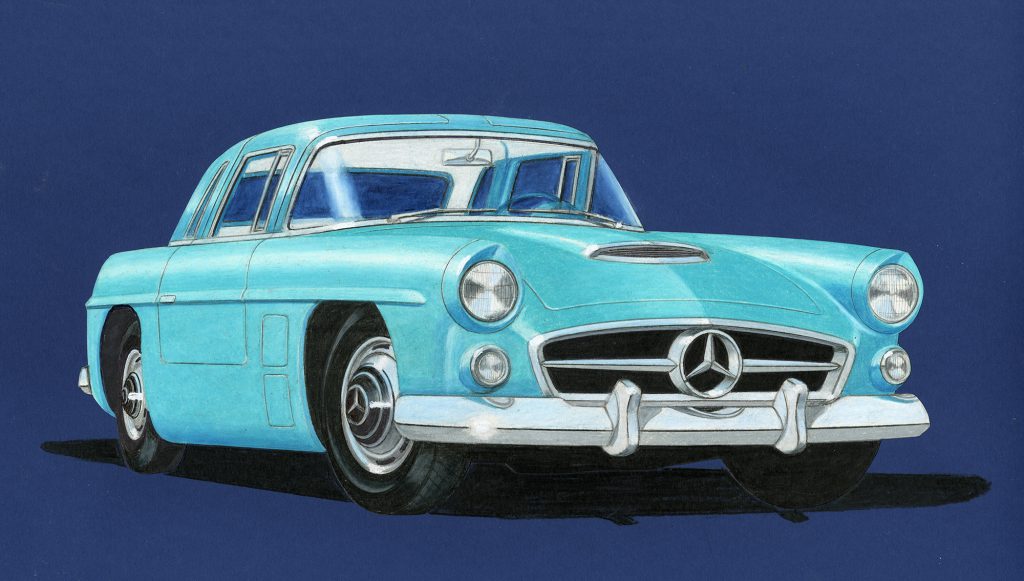 Ford’s Thunderbird wasn’t introduced to the public until the 1955 model year, but its basic design would have been nearly completed during the time frame we’re talking about here. So, I used almost all of the T-Bird’s styling elements.  Gullwing doors would necessitate a fixed roof, so no removable hardtop. Also note the functional hood scoop, road lights, and the two vents added to each front fender. The lower vent expelled engine heat, and the upper was for interior ventilation.  The Mercedes-Benz star and wheels are the only Mercedes-Benz items.

There is a lot of the ’53 Corvette in this example.  The fixed roof, fender vents and grille are Mercedes-Benz inspired.  The wheels are Halibrand magnesium units that usually appeared on the Indianapolis race cars of the day. 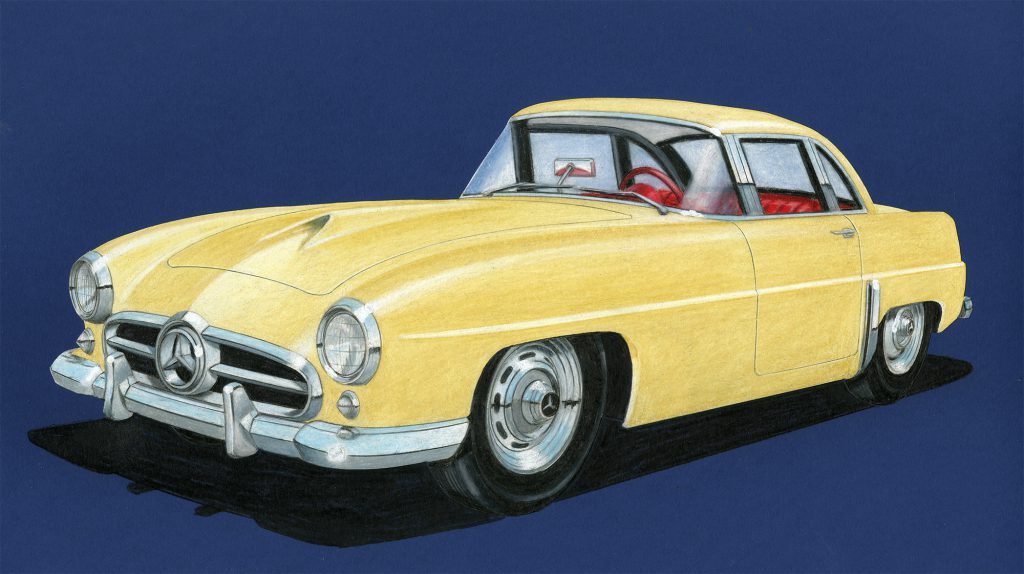 This example is a mish-mash of Hudson Italia and 300SL design elements.  I got rid of the Italia fender scoops, but put a similarly styled scoop on the hood.  No gullwing doors on this car.

What If…General Motors, Ford, and Chrysler Had Designed Small Cars the Studebaker Way? 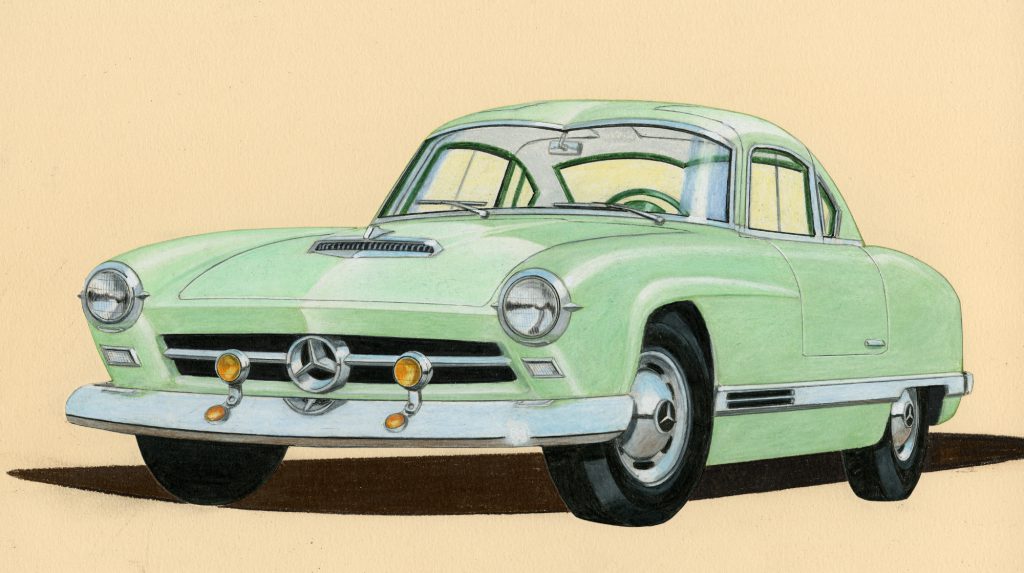 A gullwinged Kaiser?  The body designs of the 300SL and the Kaiser are similar in their smooth, uncluttered appearance.

What If…1955 Hudson (5 Alternate-Universe Possibilities) 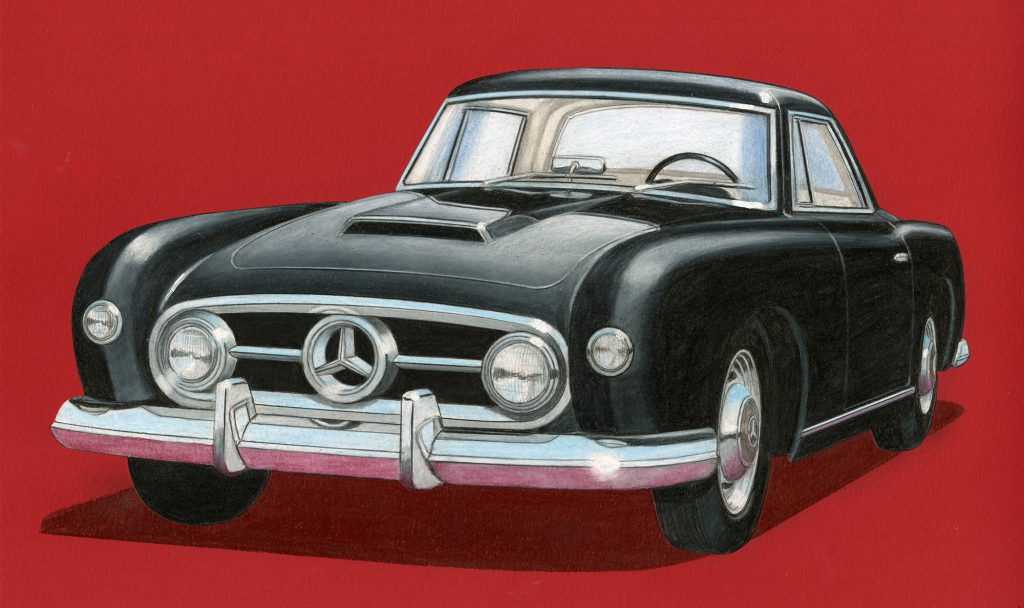 Based on the new Nash-Healey, the only Mercedes-Benz design element is the three-pointed star in the center of the grille. This car strikes me as a 300SL that should go on a diet. 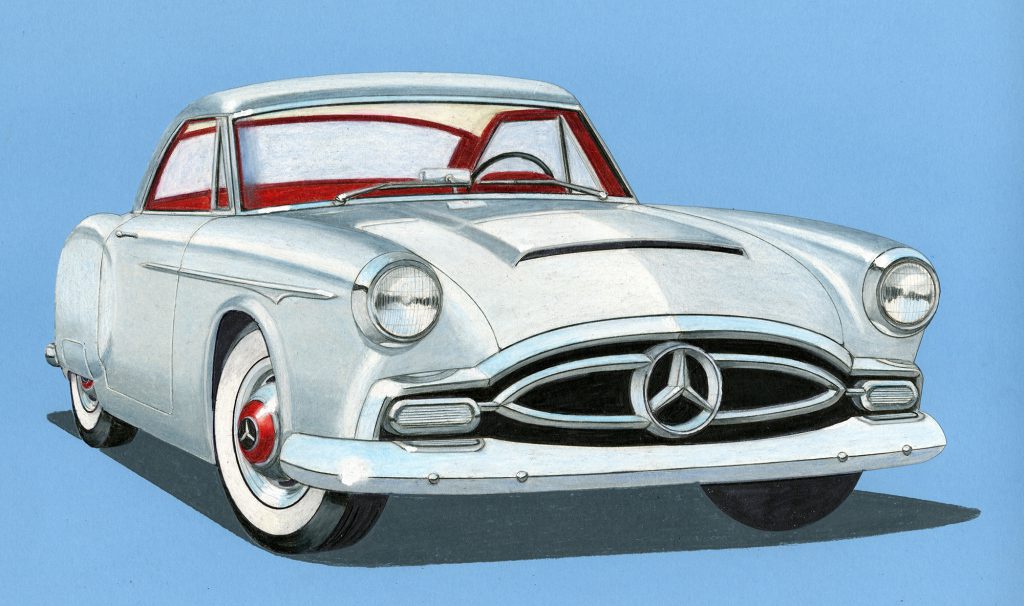 Mostly based on design elements from the 1951 Packard, this wingless version is the most “un-300SL” of the bunch. 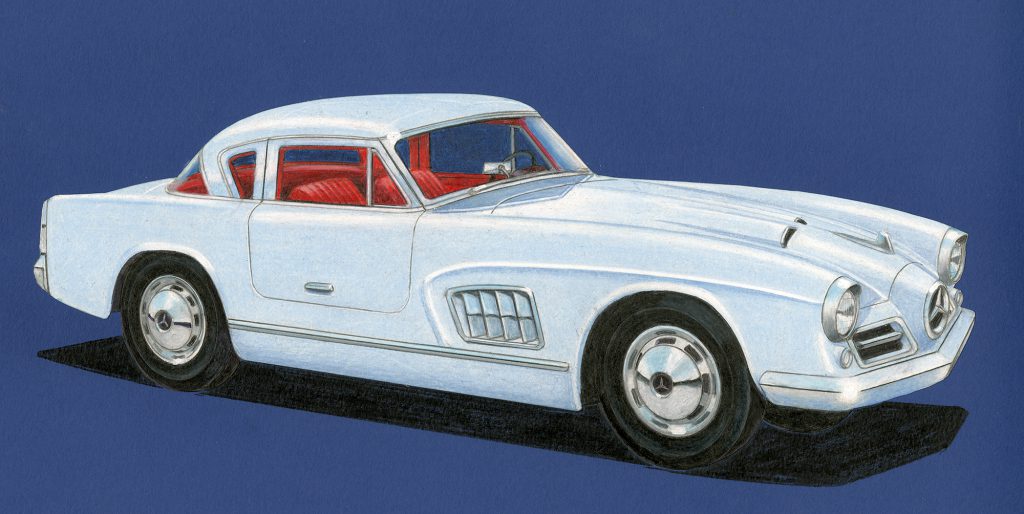 The entire greenhouse (roof) area of this car is nearly identical to the 1953 Studebaker’s.  No gullwing doors here, just real roll-down windows and vent wings. The subtle “bullet” nose is a throwback to the 1950 and ’51 Studebakers.