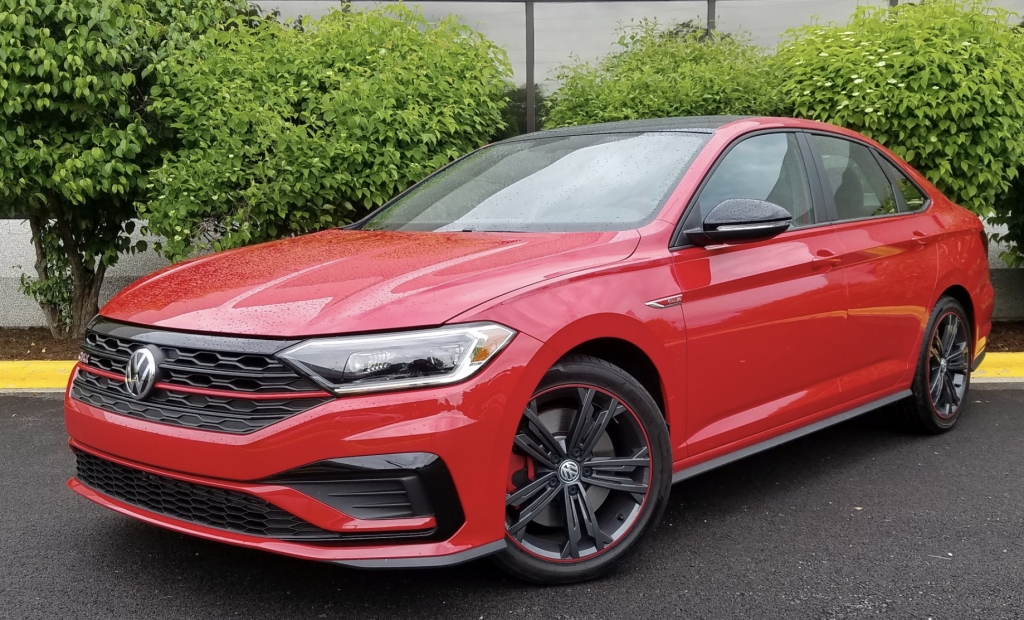 The good: Power and acceleration, impressive value for the money

The not so good: Limited options available on 35th Anniversary Edition (though they do come very-well equipped)

For those of us who remember when the first GLI hit the streets, it’s hard to image that memory is now 35 years old. But Volkswagen has made sure to remind us. 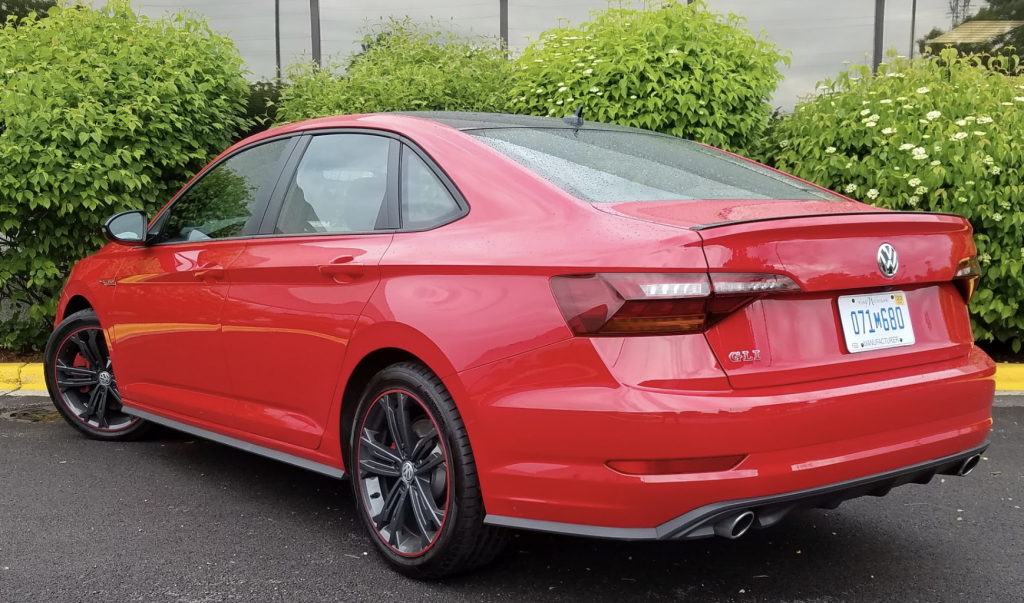 Similar to Volkswagen’s iconic GTI hatchback but with a trunk tacked on the back, the GLI makes for a great low-cost sport sedan. Added with the 35th Anniversary Edition package are an adaptive suspension, black roof, special red-striped wheels, and a subtle rear spoiler. GLIs have the edge on lesser Jettas with a more sophisticated independent rear suspension and a more powerful engine.

Originally, the GLI was pretty much a sedan version of the venerable GTI hatchback, and that was an entirely good thing … at least if you favored sedans. And the association remains today.

We sampled a more “pedestrian” Jetta SEL Premium earlier, so we invite you to read that report for more details. Here we’ll focus on the elements that made our 35th anniversary tester just a bit more … special.

First, this one comes with a 2.0-liter turbocharged engine in place of the SEL’s 1.4-liter turbo. The power difference is about as large as one might expect: 228 horsepower and 258 lb-ft of torque for the 2.0, vs. 147/184 for the 1.4. Our tester also came with a 6-speed manual transmission in place of the SEL’s 8-speed automatic, with a 7-speed automated manual being optional on the 35th. Clutch and shifter action were terrific, and the engine pulled cleanly from just 1000 rpm in second gear, though it could sometimes be caught “off boost” (resulting in a brief delay in power delivery). In any event, the combination made it seem decidedly … sportier.

So did the suspension. Whereas “lesser” Jettas — like the SEL — get a less sophisticated (and less expensive) twist-beam rear axle, the GLI gets a fully independent multi-link arrangement. Whether that made a big difference in handling is hard to tell, as the 35th Anniversary Edition also gets active suspension damping in addition to the GLI’s XDS Cross Differential System (which distributes power to the outside front wheel in a turn for better handling) and 18-inch wheels vs. the SEL’s 17s. But in any case, the Anniversary Edition’s handling added to the sporty feel, while the ride was surprisingly supple. 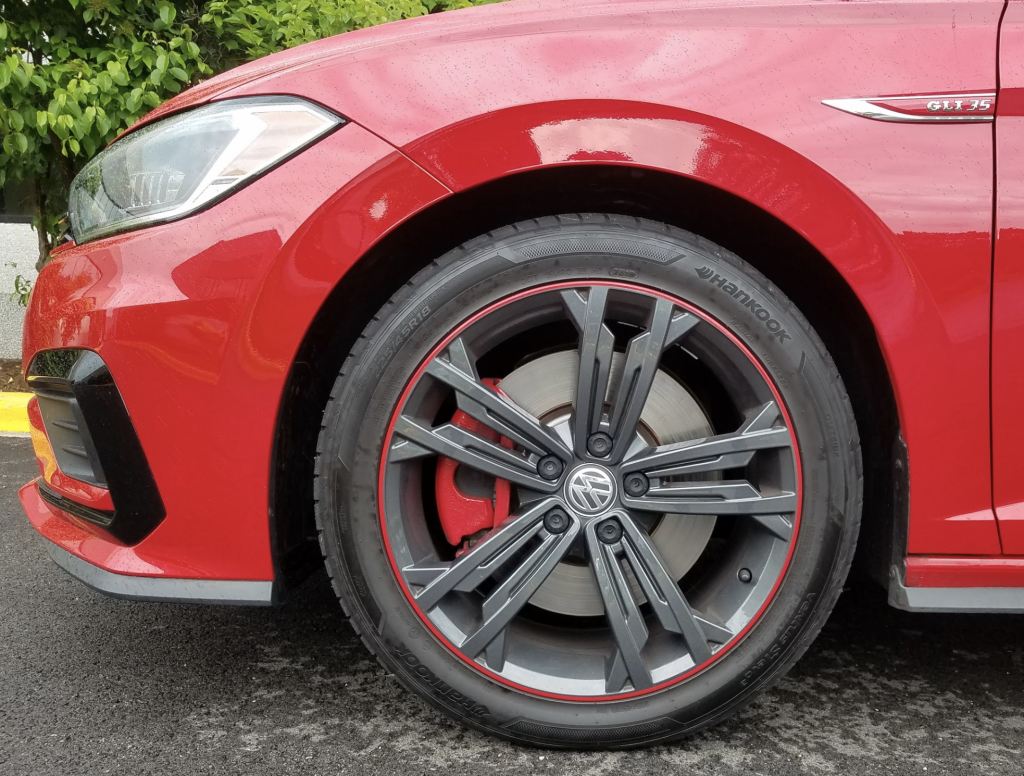 A closer look at the red-striped wheels and the 35th fender badge at top right.

A few other bits were also unique. The 35th Anniversary Edition package adds a black roof, specific exterior and interior trim, red accent striping, and perhaps the most subtle decklid spoiler in all of autodom.

A few of the SEL’s interior details drew some criticism, and one in particular carries over here. It may seem like a small thing, but the lack of rear vents for back-seaters means they have to wait longer for whatever climate change is called for up front, and they don’t get any USB ports, either. But that’s about the end of any real complaints, as visibility is good, the control layout is among the easiest out there to use, and there’s a decent amount of cabin storage space. There’s also good space for passengers, at least within the confines of the car’s overall size. 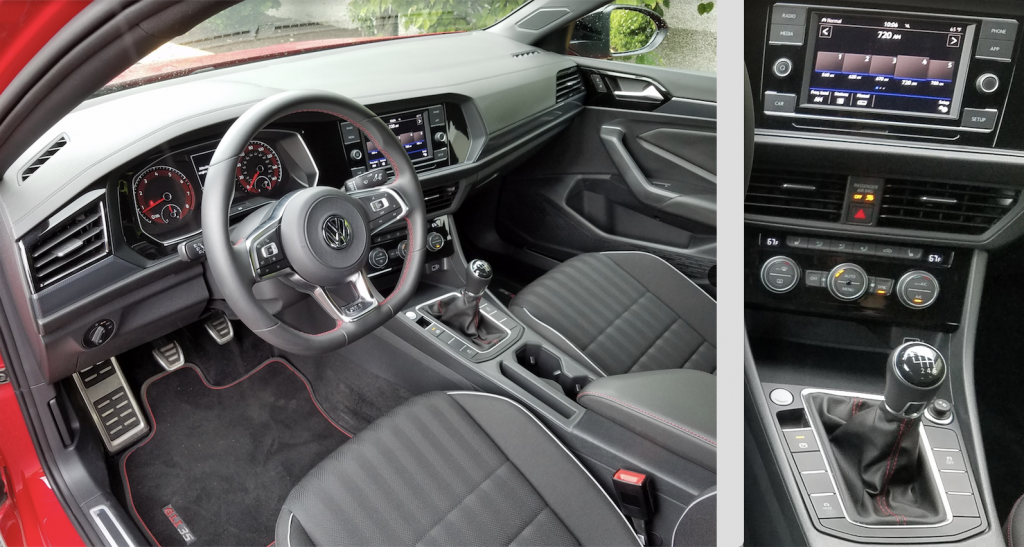 There are more red accents and 35th emblems inside. One of the Jetta’s great features is an easy-to-use control layout, and it carries over to the 35th Anniversary Edition.

And one other thing. 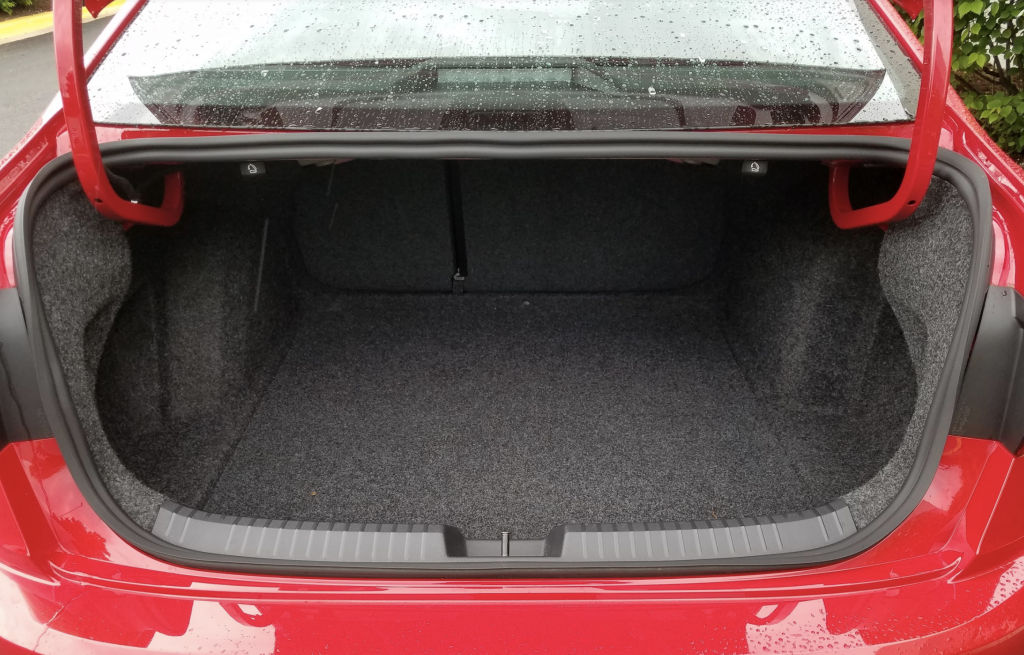 The trunk is roomy enough, but sickle-shaped hinges dip into the load area, there’s no under-floor storage, and folded rear seat backs (which can be released from the trunk) rest four inches above the level of the cargo floor.

Most test cars that arrive in our lot are loaded with options — German makes in particular — that add substantially to their bottom line. Not this German. For while the starting price of the 35th Anniversary Edition is a very reasonable $26,995, that was also the stopping point (save for destination). Some might want to add the 7-speed automated manual transmission (which behaves much like a conventional automatic), but nothing about this essentially mid-level car made it feel as though it was missing anything, though some of us bemoaned the lack of satellite radio.

Any time a model celebrates a 35th anniversary, it probably has something going for it. In the case of this GLI-based 35th Anniversary Edition model, it has a lot going for it. And it can thank its GTI sibling for much of that.

As was originally the case, the GLI shares a lot with its GTI hatchback sibling, which is much of what makes it such a fine, reasonably priced sport sedan — the 35th Anniversary Edition even more so.