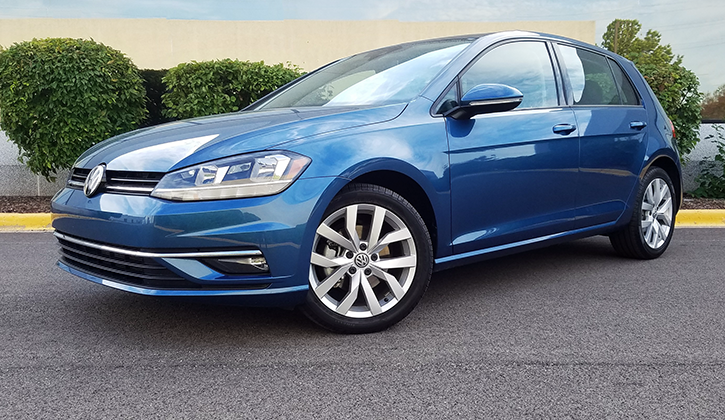 The not so good: Rear corner visibility, limited model lineup

Just look at all that Volkswagen did for the mainstream versions of its 2019 Golf: a complete change of engines and transmissions, plus the installation of forward collision warning, autonomous emergency braking, blind-spot alert, and rear cross-traffic alert as standard equipment. It looks like VW has revitalized the Golf to squeeze a few more years from its 2015-vintage design. 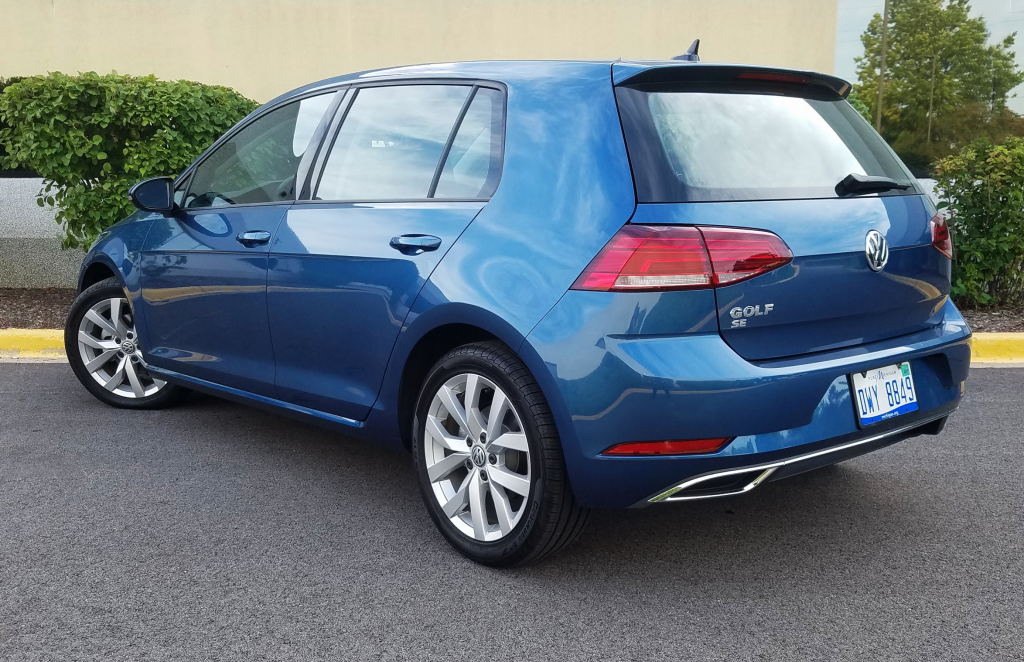 The SE is the higher grade of the Golf’s two trim levels. It comes standard with LED taillights, heated power mirrors, a panoramic sunroof, and 16-inch alloy wheels (though our tester was upgraded with 17-inch alloys).

Well, maybe just a couple more years, because this seventh-generation Golf is at the end of its lifespan–at least in some global markets. VW has introduced an all-new eighth-generation Golf, but save for the enthusiast darling GTI and Golf R models, the company hasn’t yet confirmed that they will offer the new Golf in the United States. On our shores, the seventh-gen Golf carries over with no significant changes for the 2020 model year, which could end up being the garden-variety Golf’s swan-song season here.

For 2019 (and 2020), gas-engine Golf models with the new powertrains are available in S and SE versions. For this test, Consumer Guide editors drove the better-equipped Golf SE, which starts at $26,140 with delivery, but came to $27,435 after tacking on the Driver Assistance Package option.

The Golf’s interior trimmings have long been among the classiest in the mainstream compact-car class, and that holds true for 2019. Rear-seat space is decent for the class–average-size adults can fit, though legroom can be a bit tight.

A 147-horsepower turbocharged 1.4-liter 4-cylinder engine from the all-new Jetta sedan replaces the previous 170-horse turbo 1.8-liter four. Six-speed manual and 8-speed automatic gearboxes respectively supplant 5-speed manual and 6-speed automatic transmissions. The engine is acceptably quiet and shows good—not great—strength once it shakes off a moment of turbo lag. It doesn’t exhibit any strain in speedy highway cruising. CG’s tester came with the automatic, which delivers prompt highway kickdown for get-up-and-go passing, but you can catch it hunting when poking along in tangled traffic and then trying to take advantage of a sudden opening.

The 1.4/automatic hook-up is estimated by the EPA to get 29 mpg in city driving, 37 mpg on the highway, and 32 combined—considerable improvements on the 24/33/28 projected for the erstwhile 1.8 engine and 6-speed auto. “Estimated” might be an appropriate word. This driver recorded 33.99 mpg after racking up 177.8 miles, 45 percent of which was city-type operation, but with several sustained speedy expressway runs contributing to the other 55 percent.

The Golf’s hatchback body layout provides fine cargo versatility–there’s 17.4 cubic feet of cargo space behind the back seats, and 53.7 cu. ft. when the rear seatbacks are folded down.

Handling remains pleasingly precise, and the Golf steers easily but with good response to inputs. Indeed, the car is fun to drive briskly on city and suburban streets. It leans a little in corners, but then snaps right back into shape, and you’re on your way in your intended path. This driver felt the lane-keeping function—included in the Driver Assistance group—resist some signaled changes, so it seemed slow to react to this information. Meanwhile, ride from the fully independent suspension and 17-inch alloy wheels (another option-package goody) is compliant and braking is good.

The VW hatchback boasts impressive roominess for a small car. Rear seats hold two adults, and will provide most who sit there with close but not cramped legroom and good head clearance, though getting feet out from under the front seat for exits can be a little work. Driver vision to the rear corners suffers due to the wide roof pillars, but the view elsewhere—including straight back—is fairly open. Seats are comfortable, with good support. SE-grade materials are nice. There are lots of soft, pliable surfaces up front, but rear door panels make greater use of grained plastic. Storage pockets in all four doors have “mouse-fur” lining, which is hardly common at this price level.

A turbocharged 1.4-liter 4-cylinder replaces the previous 1.8-liter four–the new engine is a bit down on rated horsepower, but up on EPA-rated fuel economy. Seventeen-inch wheels on all-season tires are included in the $1295 Driver Assistance Package, as are a blind-spot monitor with rear cross-traffic alert, lane-keep assist, automatic high-beam headlights, adaptive cruise control, and an auto-dimming rearview mirror.

CG has chipped away at the Golf for an infotainment system that’s not as feature-rich as many rivals. The silver lining is that what it does have is very easy to navigate. The climate system works primarily with three handy dials for temperature, fan speed, and mode, and a very few buttons for anything else. It’s a great control layout overall.

Cabin storage counts on a big glove box, a tiny console cubby, a small covered bin with the USB port at the front of the console, a pull-out tray to the left of the steering column, the door pockets, and pouches on the backs of the front seats. There are open cup holders in the console and the armrest that pulls down from the center of the rear seat. For luggage and other loads, a wide and flat floor—which can be lowered to accommodate taller items—is ahead of the rear hatch. With the floor at its “normal” level, there’s clearance for broad, flat items to be stashed atop the spare tire below. Little bins at the rear corners of the cargo hold will corral small loose items. A central pass-through for long items provides more flexibility for the 60/40 rear seats, which fold almost flat.

Yes, the well-built and fun-to-drive Volkswagen Golf could be leaving the American automotive scene in the near future. If it does, at least it’s going out with its humble head held high. 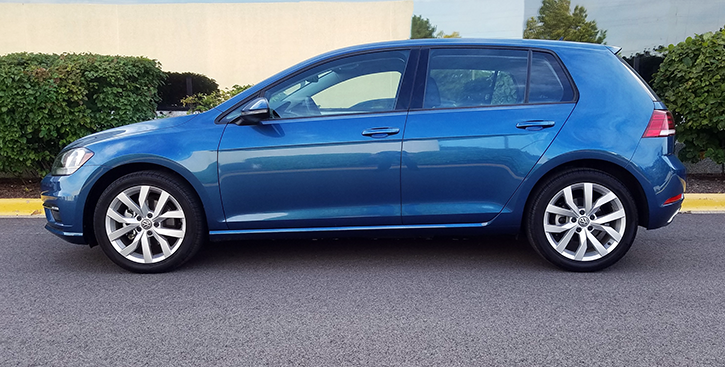 The current-generation Volkswagen Golf is going to hang around for at least one more model year in the U.S. market, but the Golf’s future here is uncertain. A new eighth-generation Golf is set to go on sale as a 2020 model in some global markets, but at this point VW hasn’t announced whether it will offer the “garden-variety” new Golf in America. The performance-focused GTI and Golf R versions of the new-generation Golf are slated to be sold on our shores, however.