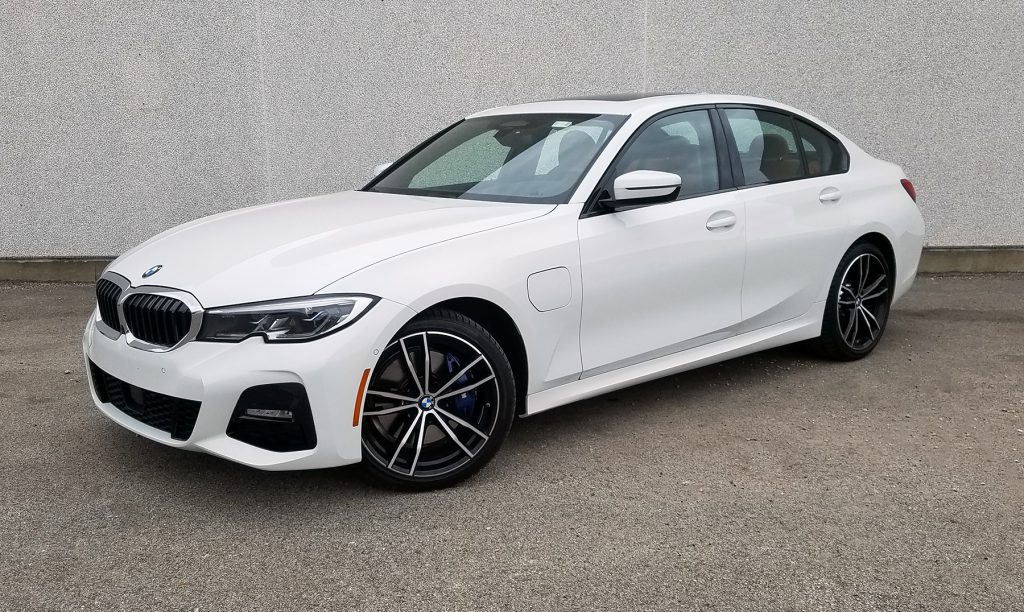 The not so good: Powertrain behavior is sometimes non-linear; hybrid system’s hardware steals a significant amount of trunk space

In recent years the BMW 3-Series has seen its coupe and convertible spun off into a separate series and its station wagon discontinued, but the premium-compact sedan that remains still presents variety to those shopping in the class. That grows in 2021 with the return of plug-in-hybrid 330e models. 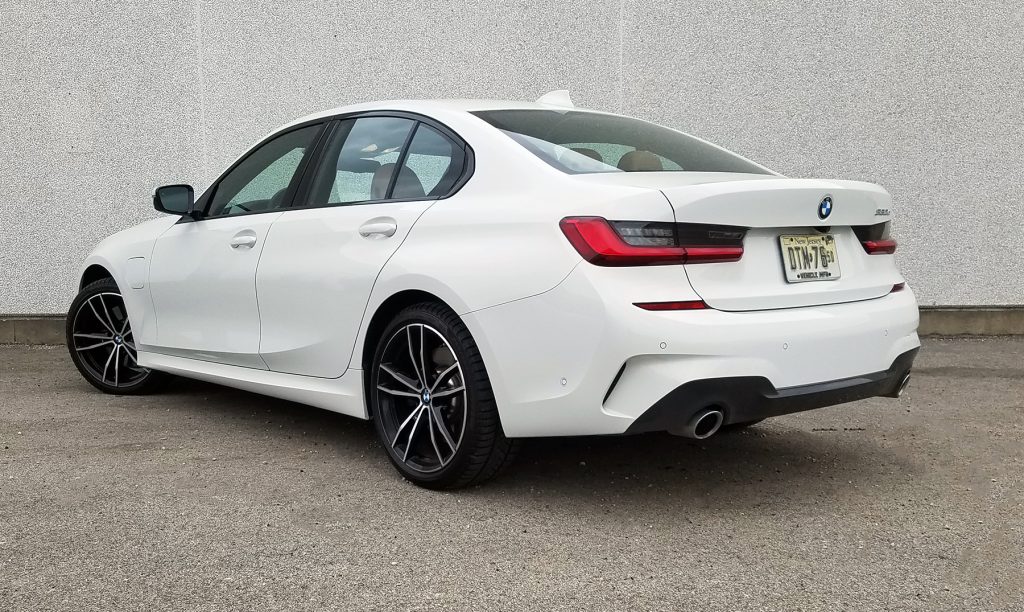 Consumer Guide editors got to sample a rear-wheel-drive 330e, which starts at $45,545 with delivery. Its key distinction from other seventh-generation 3s they have driven—a 2019 330i and a ’20 M340i, both equipped with xDrive all-wheel drive—is its gas/electric powerplant. The 330e joins a turbocharged 2.0-liter 4-cylinder engine to an electric motor for system outputs of 288 horsepower and 310 lb-ft of torque—gains of 33 horsepower and 16 lb-ft over the 330i’s gas four, and 41 more horsepower than the previous-generation plug-in. 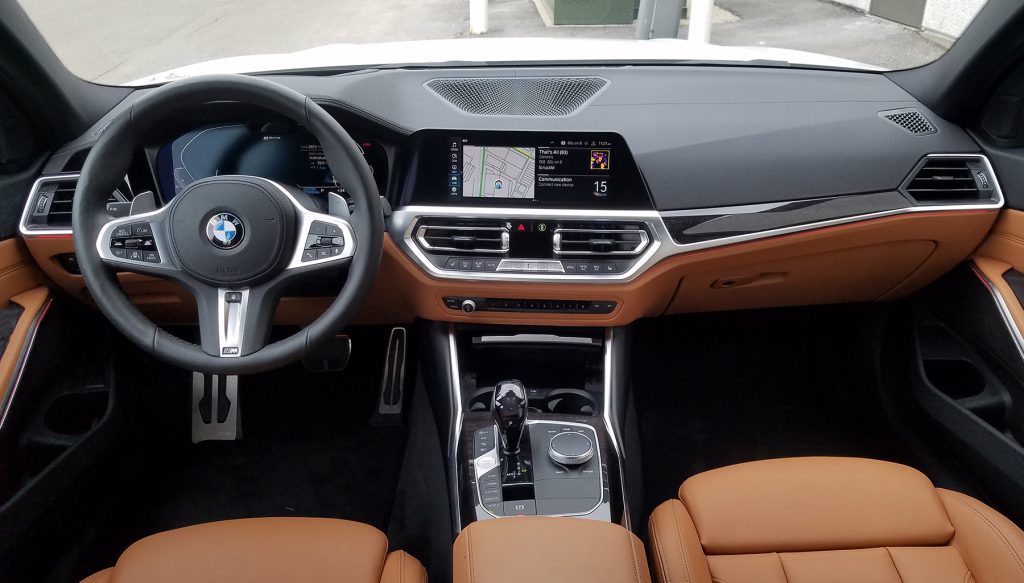 Like other 3-Series models, the 330e’s cabin boasts upscale materials and excellent assembly quality. The Executive Package adds features such as a heated steering wheel, heated seats, keyless entry, and a head-up display.

There’s also more all-electric range for the 330e. Fed by a 12-kWh lithium-ion battery pack, it can run for 22 miles without the internal-combustion engine kicking in, though that figure falls to 20 miles for the 330e xDrive. The prior plug-in promised just 14 miles of such range.

From its selectable drive modes, the 330e automatically starts off operating in a traditional manner that fluctuates between gas and electric power, transitions that it makes with extreme subtlety. An “Electric” mode turns the car into a pure EV (and will keep it one at speeds up to 87 mph) and activates more aggressive regenerative braking to help stave off battery depletion. In either of these electric-first modes the 330e is an alert and able performer in city driving, though we noticed that when using the selectable brake-hold function at full stops there was some jerkiness when getting going again. For spicier driving flavor, “Sport” is necessary. This switches off the electrics to let the 181-horsepower fossil-fueler fully take over. In Sport, the 8-speed automatic transmission found in almost all current 3-Series models holds its ranges a little longer and then shifts a little more crisply.

One additional—and new—trick up Sport’s sleeve is “XtraBoost,” which injects a further 40 horses for up to 10 seconds under full acceleration. That’s what gives the car its manufacturer-claimed 5.6-second 0-to-60-mph clocking—which is the same time BMW reports for a rear-drive 330i. Contrary to many other AWD BMWs, the 330e xDrive is actually said to be slower to 60 at a claimed 5.7 seconds.

As for fuel economy, it is the availability of electric power to take some of the load off the gas engine that makes the 330e somewhat frugal. The EPA combined estimate for the hybrid’s gas engine is 28 mpg, which is 2 mpg less than the 330i that has a more-powerful 2.0-liter four but is 479 pounds lighter; some CG testers’ gas use was worse than that. The rear-drive 330e has a 75 MPGe rating, while the xDrive hybrid is projected for 67 MPGe. Put that together with the slower 0-to-60 time and the slight reduction in all-electric driving range and it’s hard to imagine justifying to anyone but the most bad-weather-traction-obsessed driver the extra $2000 a 330e xDrive costs.

There’s respectable space for the driver and front-seat passenger on comfortable, supportive seats, but the rear seat is a bit cramped in terms of both headroom and legroom for adults–which is not uncommon for the premium compact car class.

Despite tipping the scales at 4039 pounds, the 330e still handles and corners quite well, especially in Sport mode. The Dynamic Handling Package option on the test car included variable sport steering and adaptive M suspension that gave it a firm but not punitive ride feel and sharper, less-boosted steering in the Sport setting. Braking action under regeneration is better than in the great majority of hybrids.

The charge port is located on the driver’s side front fender. A 120V Level 1 charging cable (with carrying case) is included.

Two other things that separate the 330e from the 330i are the instrument panel and the trunk. The hybrid’s instrument cluster fills the same 8.8-inch space, but it displays things like electric-motor output, charge status, and driving ranges. In Sport, a tachometer replaces the EV readout on the right side. With the hybrid battery located under the rear seat, the fuel tank (at a reduced 10.6 gallons) is relocated above the rear axle. This requires the trunk floor to rise over the tank. Thus, the 330e has 13.2 cubic feet of cargo room, 29 percent less than gas-engine 3s. The back portion of the hybrid’s trunk floor can be set so that it forms a flat load floor throughout, or it can drop down to free up additional overall cargo space. A couple’s weekly groceries, packaged in numerous smaller bags, pretty much filled the trunk. In the hybrid the 40/20/40 split rear seats retract at a level below the trunk-floor height.

The 330e is powered by a turbocharged 2.0-liter 4-cylinder engine paired with an electric motor for a total output of 288 horsepower. Our test vehicle was equipped with 19-inch M wheels on Pirelli tires.

Room and amenities in the test car were like those in similarly equipped 3-Series cars we’ve driven, and we’ll direct you there for those details. The hybrids cost $3300 more than comparable 330i sedans, but they are eligible for one-time federal tax credits of up to $5836, and perhaps other state and local programs.

The 330e brings better fuel economy and short-trip pure-EV functionality to BMW’s laudable compact sport sedan, but an initial purchase-price premium and compromised powertrain smoothness and linearity come along for the ride. 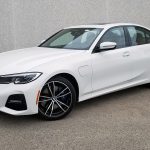 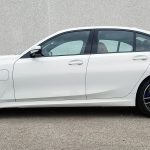 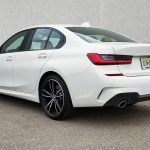 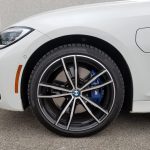 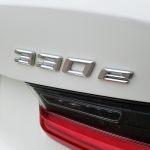 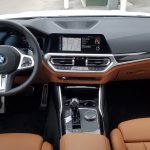 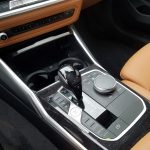 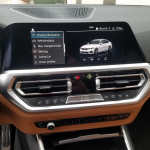 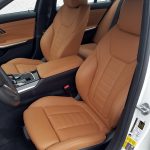 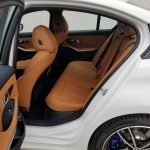 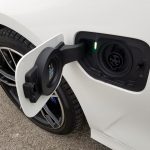 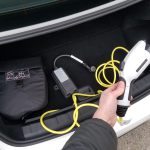