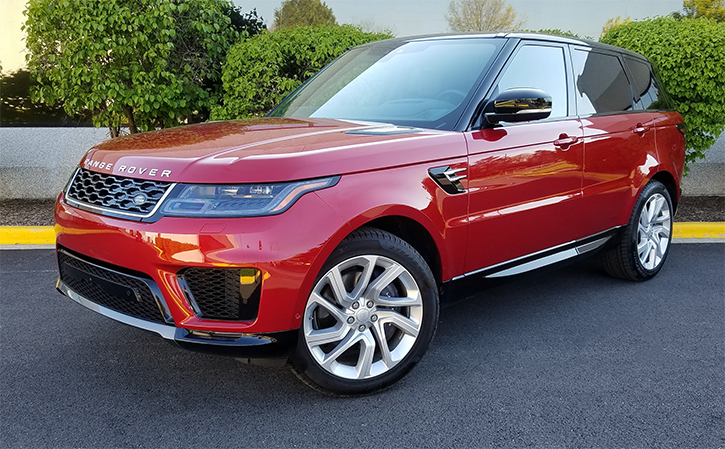 The not so good: Charging process can be finicky on some charging stations; pricey options

This vehicle review begins with a spoiler alert—and no, we don’t mean the chime that sounds when a low-hanging aero enhancement gets close to a parking bumper. We’re telling the reader up front that this is a test of a sport-utility vehicle that you can’t buy yet. 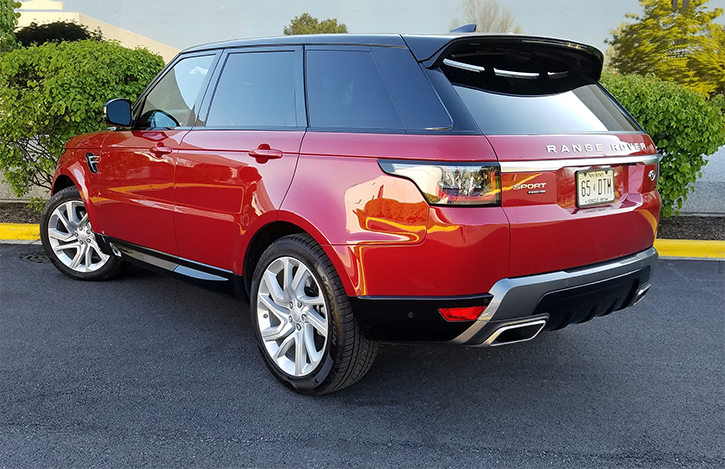 The extra-cost appearance options (Firenze Red paint, black contrast roof, 21-inch wheels) tacked on another $3210 to the bottom line of our test vehicle, but they certainly add to its visual appeal.

From a retail standpoint, there is no such thing as a 2019 Range Rover Sport P400e plug-in hybrid—at least in the USA. It’s available elsewhere in the world (and was once expected to be added to the American lineup for ’19), but it won’t be on sale here until the 2020 model year kicks in. However, a gaggle of the premium-midsize SUVs is circulating amongst keyboard and video jockeys so that they can tell you something about what’s coming should you wish to know.

The Range Rover Sport boasts the high-end interior trim expected of the brand. The dual-screen infotainment system takes some getting used to, but it has an intuitive layout for the most part. Rear-seat passenger room is good for most adults, though a center-seat rider will have to contend with less seat padding and a raised floor section.

The central element to this addition to the Range Rover Sport family is, of course, its gasoline/electric powerplant. There’s a 2.0-liter turbocharged 4-cylinder gas engine that makes 296 horsepower, plus an electric motor rated at 141 horsepower, and in those times when they need to team up, a maximum system output of 398 ponies is on tap. The instant-on torque of the electric motor helps to get the 5400-pound-plus Sport moving briskly from a stop, and acceleration up to expressway cruising speeds is direct and almost effortless. (The manufacturer reports a 0-60-mph time of 6.3 seconds.) The 8-speed automatic transmission kicks down quickly for passing boost, but it’s smooth and unobtrusive in normal shifts. Some drivers may consider the gas engine a touch gruff at idle.

Of course, hybrids are as much about fuel economy as they are about giddy-up. In the case of a plug-in hybrid like the Sport P400e, the plan is to accommodate some all-electric operation to put off gasoline consumption. The hybrid Sport incorporates a 13.1-kWh lithium-ion battery housed beneath the cargo floor that should provide around 30 miles of gasless range if a driver selects “EV” mode via a button on the console. In two charges during this reviewer’s time with the vehicle, one of 73 percent indicated 14 miles of electric range and another of 99 percent promised 27 miles of range. With periods of all-electric driving and conventional-hybrid gas/electric operation, he recorded 23.7 mpg from a trip of 250 miles that included 55 percent city-type operation. (At the time of our test, the U.S. EPA had not posted fuel-mileage estimates for the plug-in Sport.) There is a standard stop/start feature that can be switched off.

A small P400e badge on the rear liftgate is the only real tip-off of this Range Rover Sport’s plug-in-hybrid status; the charge port is located behind a hidden door on the driver’s side of the grille.

One thing about the Sport hybrid’s operation that left Consumer Guide editors a little put out was an inexplicable complication to charging. We’ve driven numerous pure electrics and plug-in hybrids that began ingesting juice within seconds of simply having the charger inserted. But this Range Rover always generated an immediate “fault” in the 240-volt charger at CG Supreme World Headquarters, and only by unlocking the car and removing and reinserting the charger gun were we able to work around this. Later, at home, this driver tried to use the extra-cost 110-volt charger, but it flat out refused to start charging, even with reinsertions—and a check of the owner’s manual didn’t indicate any special rituals should have been necessary to conjure the flow of power. Other electrified vehicles have made the process simple and direct, so it’s hard to understand why that’s not the case with this one. When the “level-2” charger at our offices did kick in, an instrument-panel display reported a 3-hour, 28-minute recharge time. Land Rover claims 110-volt charging should take “as little as” 14 hours.

Since our last run in a Range Rover Sport, controls have been updated. In 2018 a second central touchscreen was added to serve as the control panel for the climate system, though two external dials still exist to set temperatures and fan speed—after a fan icon has been tapped on the touchscreen. The upper screen governs such things as audio, communications, and navigation. The nav system in the hybrid will select routes it deems most efficient based on terrain, as well as keeping tabs on nearby charging points. The interactive driver display in the instrument cluster includes real-time readouts of hybrid-drive performance. 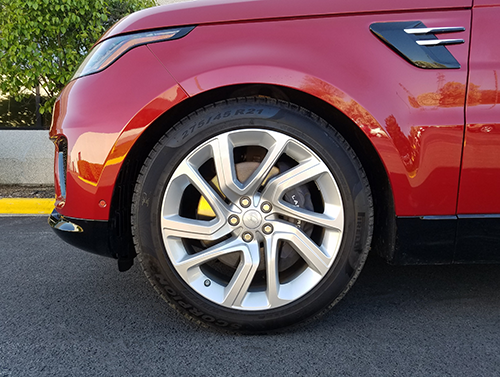 Land Rover priced the test vehicle, which came in HSE trim, at $79,000 to start, with another $1295 required for delivery. That should be a good indicator of what the 2020 model will cost. As equipped with a trio of luxury and tech packages and nine individual options, the total price hit a considerable $93,200.

The aluminum body structure is quiet and secure, and on-road ride is smooth and nicely isolated from road jolts, even with extra-cost 21-inch alloy wheels. An electronically controlled independent front and rear air suspension is standard. A Terrain Response System manages the full-time 4-wheel drive with the help of “General,” “Snow,” “Mud,” and “Sand” settings. Lane-departure warning, rear cross-traffic alert, and blind-spot monitor are included, with items like adaptive cruise control and high-speed emergency braking available in the Driver Assist Package. The rich leather-upholstered interior is beautifully executed.

Come to think of it, a person could get a little spoiled by the Range Rover Sport’s ambience and opulence. Sound the alert.

The P400e plug-in-hybrid model commands a price premium of about $4000, but it delivers impressive fuel economy (including the fuel-saving versatility of limited-range pure-electric operation) with little compromise to overall drivability and refinement.