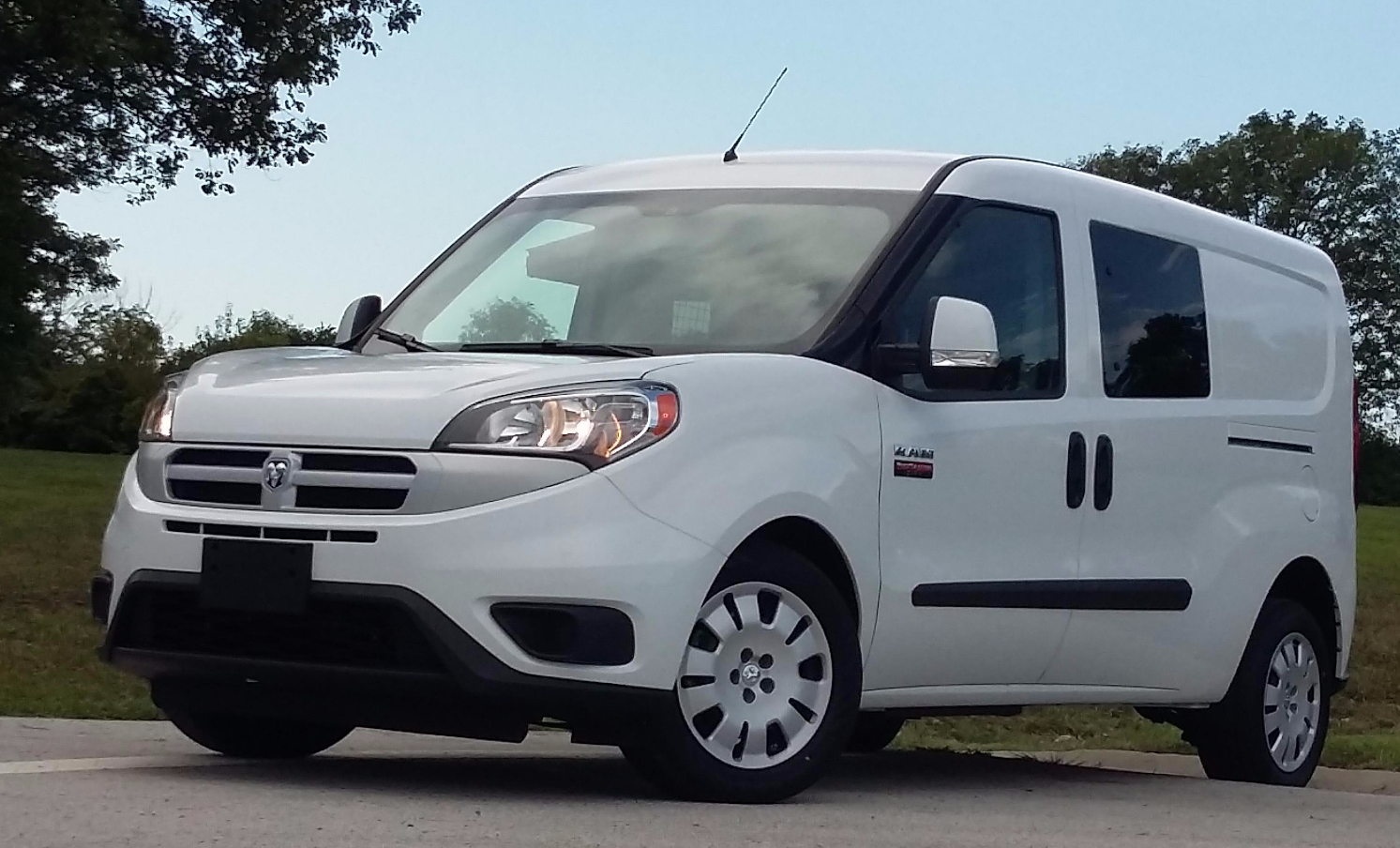 Ram’s ProMaster City competes with the popular Ford Transit Connect, the first of the modern compact commercial vans. Like others in the class, ProMaster City is front-wheel drive. It starts at $24,440 including destination.

The not so good: Ride, noise, visibility, interior materials

Once you embrace the fact that the ProMaster City is essentially an empty box on wheels, it’s easy to conclude that its virtues far outweigh its vices.

The modern “Compact Commercial Van” segment can be traced back to the original Ford Transit Connect of 2010. Its subsequent success drove Nissan to debut the NV200, Ford to bring out a redesigned Transit Connect, Ram to introduce the ProMaster City, and Chevrolet to join in with the City Express – essentially a rebadged version of the Nissan – bringing the current class count to four. Most also offer passenger versions, but they’re not nearly as popular as the dedicated cargo haulers.

Like all its direct competitors, the ProMaster City is front-wheel drive. It comes only with a 178-horsepower 2.4-liter four mated to a 9-speed automatic transmission, a combination that earns it EPA ratings of 21 city/29 highway/24 combined. Over 369 miles of 20 percent city driving, we averaged 25.1 mpg, with a high of 25.9 mpg on a long, mostly highway trip. 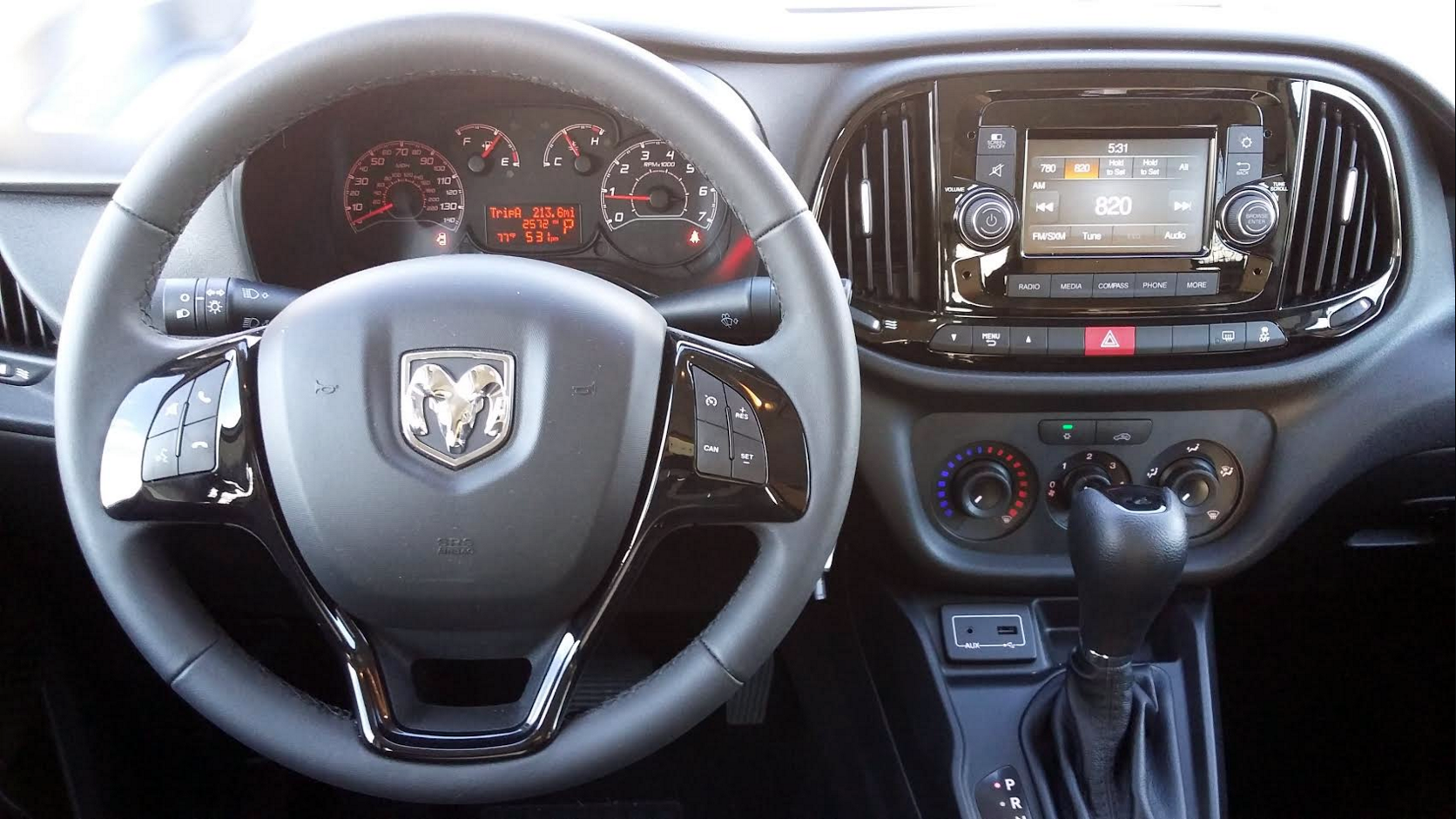 Controls are a study in simplicity and ease of operation. However, the small speedometer at the far left of the instrument cluster has very small numbers (do they really need to go up to 140 mph?) that can be hard to see, particularly when wearing sunglasses.

If you grade the ProMaster City on a passenger-vehicle scale, it doesn’t come off well – at least at first. The ride isn’t so much stiff as it is bouncy, but you quickly figure out that most of the movement is coming from the lightly loaded rear end, which has to have stiff enough springs to handle a lofty 1883-lb payload capacity. Towing capacity is 2000 lbs.

Next you notice that it’s noisy. Even at around-town speeds, there’s a constant roar from the back, which sounds mostly like road noise coming from the tires. It’s not so much annoying as just clearly noticeable, and it’s only a little more so at highway speeds. It would be most problematic if you’re trying to converse with someone, but otherwise, you sort of get used to it.

Nailing the gas from a stop results in an impressively smart jump off the line – sometimes even chirping the tires – but things taper off as you pass 40 or so. We averaged 9.6 seconds 0-60 mph, hardly in rocket territory. Furthermore, the transmission often hesitated to downshift when you hit the throttle while underway, but the ProMaster moved out quite well once it did. 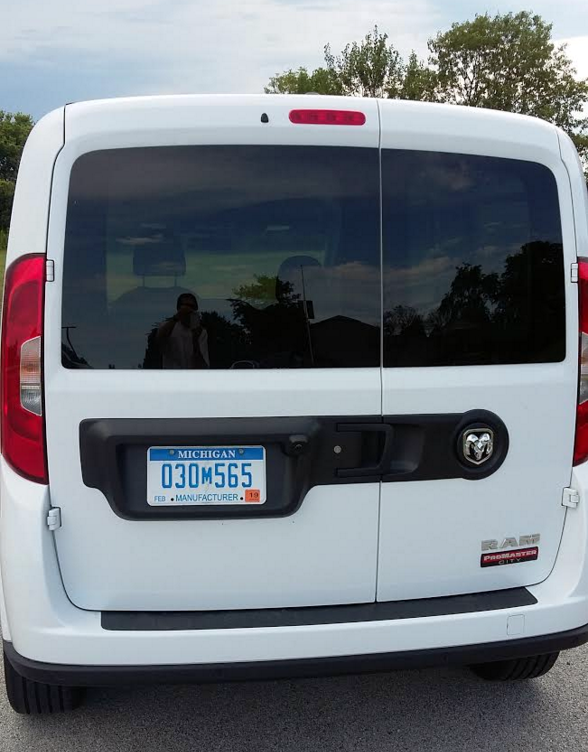 Rear doors are split 60/40, with the shorter one on the curb side for easy unloading.

I took the ProMaster City on a long highway trip and found its seats to be quite comfortable, and I liked the high, commanding driving position and “airy” surrounds afforded by its tall windows. But interior materials are definitely on the utilitarian side. Hard plastic is everywhere, broken only by very slight padding on the door armrests and nice padding on the fold-down driver’s armrest (there’s none for the passenger). But the door tops, while hard, have a wide, flat upper surface that is comfortable to rest your elbow on, and it’s far enough outboard that larger folks shouldn’t feel squeezed. They’ll also have plenty of headroom and likely enough legroom, and the low step-in height makes getting in and out a breeze. 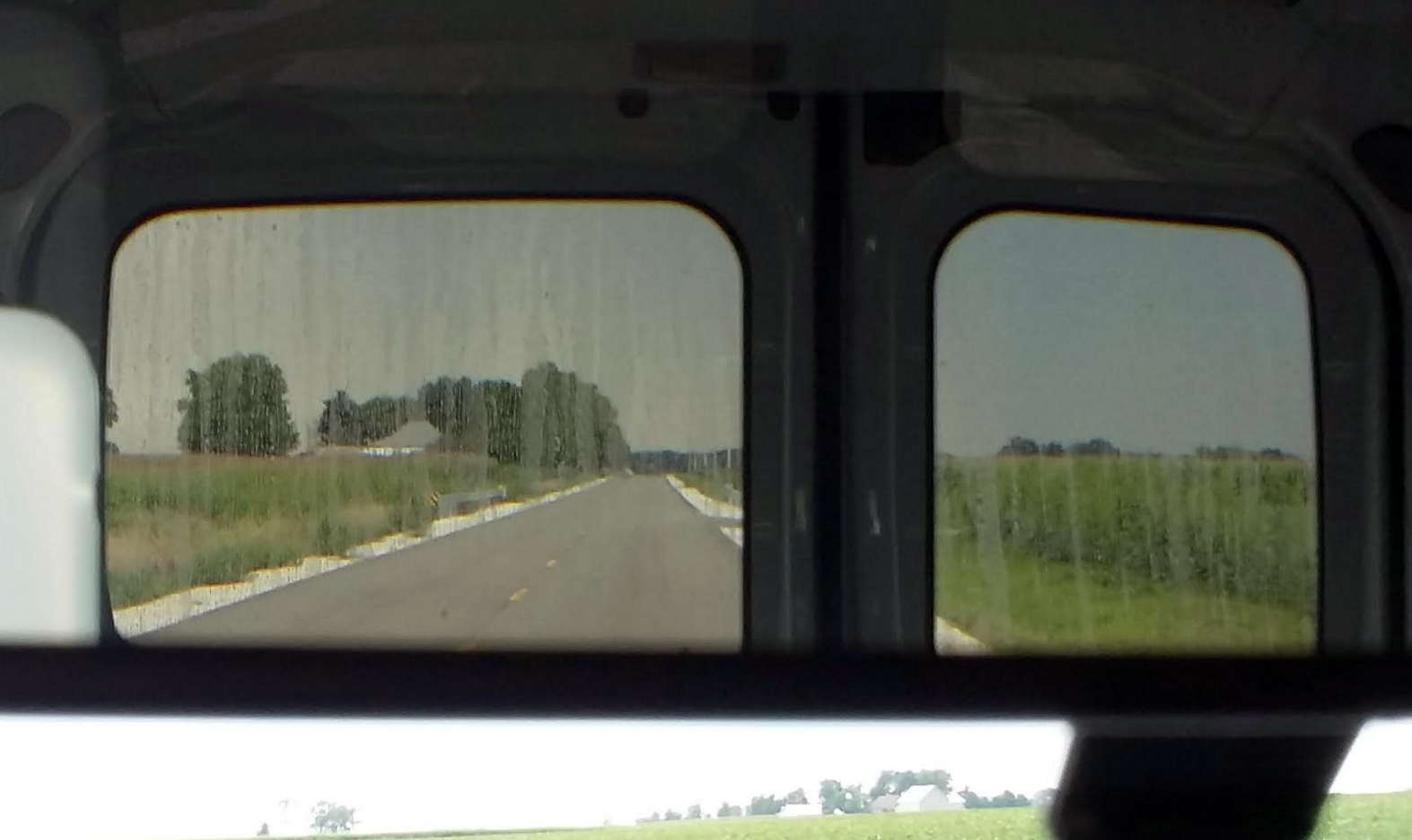 This view through the rearview mirror shows that the offset back windows allows a clear view of traffic behind.

Less impressive is visibility. The left-side front roof pillar is rather thick, blocking quite a bit to that corner, though the right-side one obstructs less due to its angle (rather the opposite of most). Side pillars are also thick, and in our test vehicle, the rear corner panels were sheetmetal, which leaves a big rear-corner blind spot. Helping were wide-angle lenses built into the outside mirrors (though I wish the wide-angle part was taller), a rearview camera (though it only “sees” in a 140-degree arc, where the best look 180 degrees) and rear-obstacle detection. The rear “barn doors” are split 60/40, a (probably unintended) benefit being that the post separating the two windows is offset to the right so that it doesn’t obstruct your view of vehicles behind. Oddly, when folded down, the sun visor has sort of a triangular shape that makes it tough to block the sun from the corner without also blocking your view of the road.

We drive the Nissan NV200 Taxi

When you go to turn on the radio, you notice a positive: volume and tuning knobs with some physical selection buttons along with large virtual screen buttons – that include the station number – all mounted high within easy reach. With the press of one of those physical selection buttons, you can call up a big compass – a nice touch. Climate controls consist of three rotary knobs, the best design ever invented (and rarely seen anymore). In fact, all the controls – including lights and wipers – have a certain quaintness to their simplicity.

Interior storage is reasonably good. There’s a small glovebox with a wide tray above it, two cupholders and three small bins in the console, map pockets in the doors, and a full-width overhead bin with a cargo net (good) but also a hard bottom (bad, as stuff up there will rattle).

But a vehicle of this nature is all about the cargo area. Side doors are typical minivan sliders. The aforementioned 60/40 back doors have the wider part on the left, which Ram points out allows room for a delivery person to walk past the smaller right-side door to the curb, but both doors also open 180 degrees. The floor is 48.4 inches wide between the wheelwells, which allows pallets to be placed flat on the floor, but is only about 7 feet long, so 4×8 sheets can’t fit in without leaving the back doors open. The rear door opening is 48 inches wide and 49 inches high, while the cargo area itself is 60.4 inches wide and 51.8 inches high, for a total cargo capacity of 131.7 cu. ft. The cargo load floor is 21.5 inches off the ground, which is low for a cargo van. Also fairly low is the overall height of 74 inches (6’2), and even though the radio antenna sticks up above that, I was able to (just barely) fit the truck under my garage door. 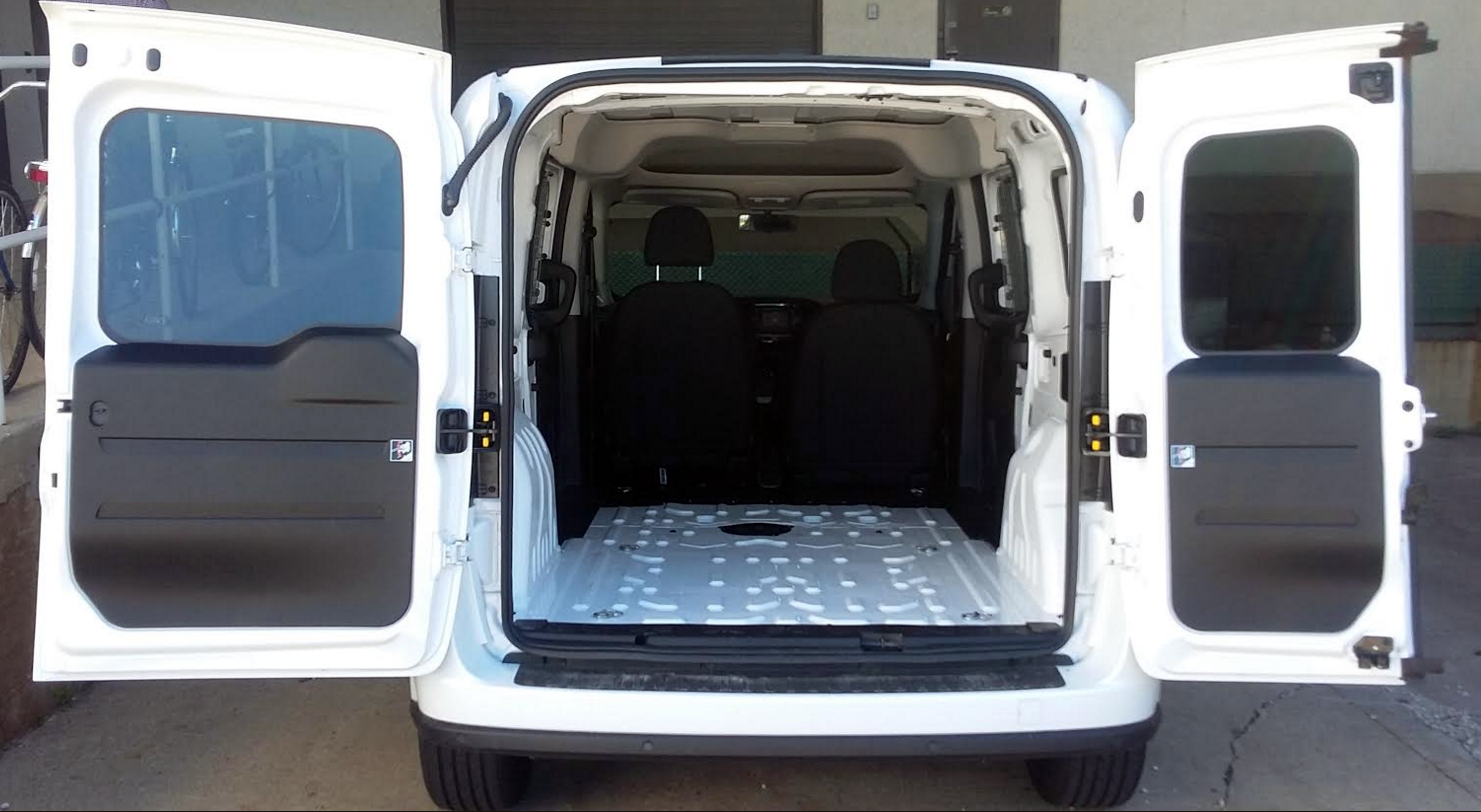 Both rear doors can be opened 180 degrees to reveal an opening four feet wide.

Although the ProMaster City is intended for commercial use, I can see it being attractive to “active lifestyle” folks as well, its cargo area being usable as sort of an enclosed pickup bed (especially if a dividing wall is installed behind the passenger area). The 7-foot-long floor means most people could use it as a traveling motel room or for transporting a jet ski or kayak, while its low deck and 51.8-inch ceiling height would allow it to swallow a small dirt bike or 4-wheeler (though getting it in might be tricky due to limited head clearance). When not in use by the weekend warrior, it’s a reasonably economical commuter with front-drive traction and decent driving dynamics. Also, anything you carry in back can be kept under lock and key, and the whole vehicle is significantly shorter than a compact pickup with a 6- or 7-foot bed. My only concern is that you can’t get it with rear side windows, though you could have aftermarket ones installed. I also wish there was an all-wheel-drive version and an extended model with an 8-foot floor (so you could carry 4×8 sheets), but that’s just me.

With only four vehicles in the class (three, really, as the Nissan and Chevy are distinguished mostly by badging), it only makes sense to try them all. Your choice might hinge on specific considerations more than they would for a passenger vehicle (such as price, fuel economy, certain dimensions, or weight-carrying capability), and depending on your priorities, the Ram ProMaster City might well best fill the bill.