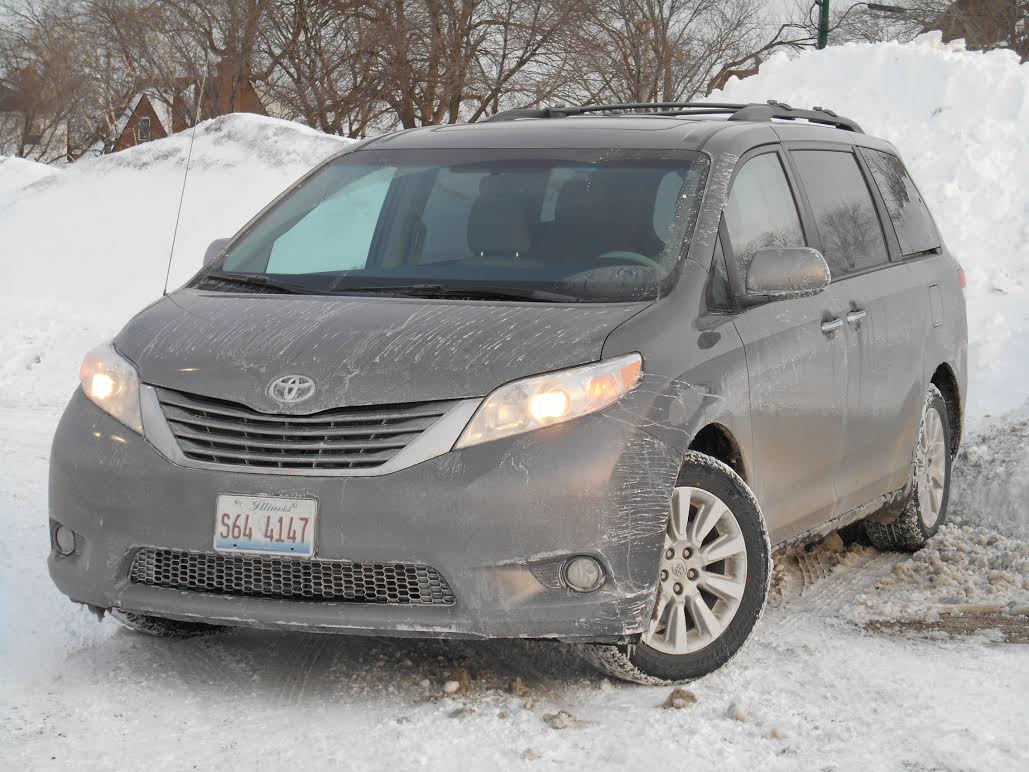 Our test Toyota Sienna is seen here backed up against the now ubiquitous Consumer Guide wall of snow. Well equipped in XLE AWD trim, our test van came to $40,322 including an $860 destination charge.

The great: Roomy, spacious, comfortable for the long haul

The good: Plenty of thoughtful design features, good power, an ace in the snow

The not so good: Fussy controls, thirsty around town

Minivan purchasers who need usable room, comfort, thoughtful conveniences, and secure ride and handling—and that’s probably all of them—will appreciate the all-wheel-drive Toyota Sienna XLE. It delivers all of those qualities. 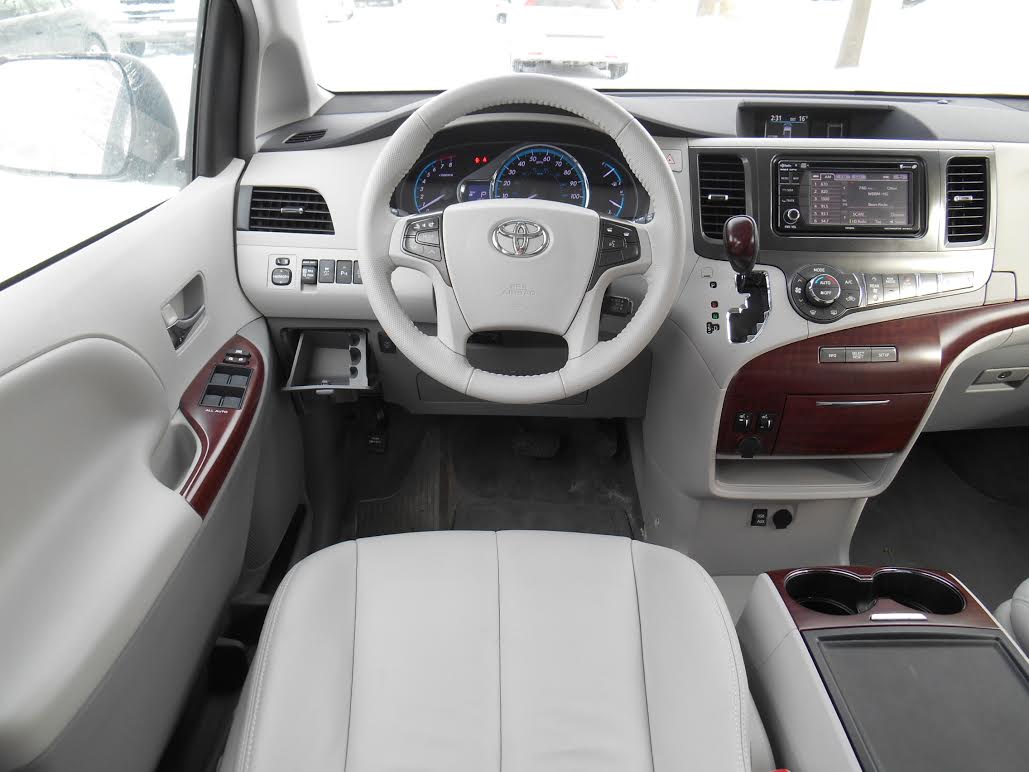 Our well-optioned Sienna in XLE presents well as viewed from the driver’s seat. Some drivers found a few of the audio and climate controls to be a long reach, and little complicated to boot.

Individual seats in the first two rows of the XLE that we tested were comfy, though cushions in the second row were a little low. Plus, third-row seats are actually sufficiently roomy for a couple of adults—who wouldn’t have to knock themselves out to get back there, either. For owners wrestling with cargo needs, middle-row seats are removable and the third row folds into a well at the very back of the vehicle. (With the third-row seats in use, this well does add to available cargo space.) Controls were easy to read, reach, and operate.

As for the aforementioned thoughtful conveniences, consider these:

• The rear portion of the center console tracks back toward the middle-row occupants, providing them with cup holders and storage space.

• Molded grocery-bag hooks are attached to the back of the front seats.

• Third-row riders have molded-in cup holders and covered storage bins built into the side walls.

The test Sienna’s all-wheel traction really proved itself during a 2-inch-an-hour rush-hour snowstorm, keeping its head when many about it seemed to be losing theirs. (You did not want to be driving a rear-drive vehicle during this winter carnival, folks.) In these conditions, the Sienna, with Active Torque Control AWD, not only kept going but kept going where it was pointed on slick pavement or in accumulated snow. 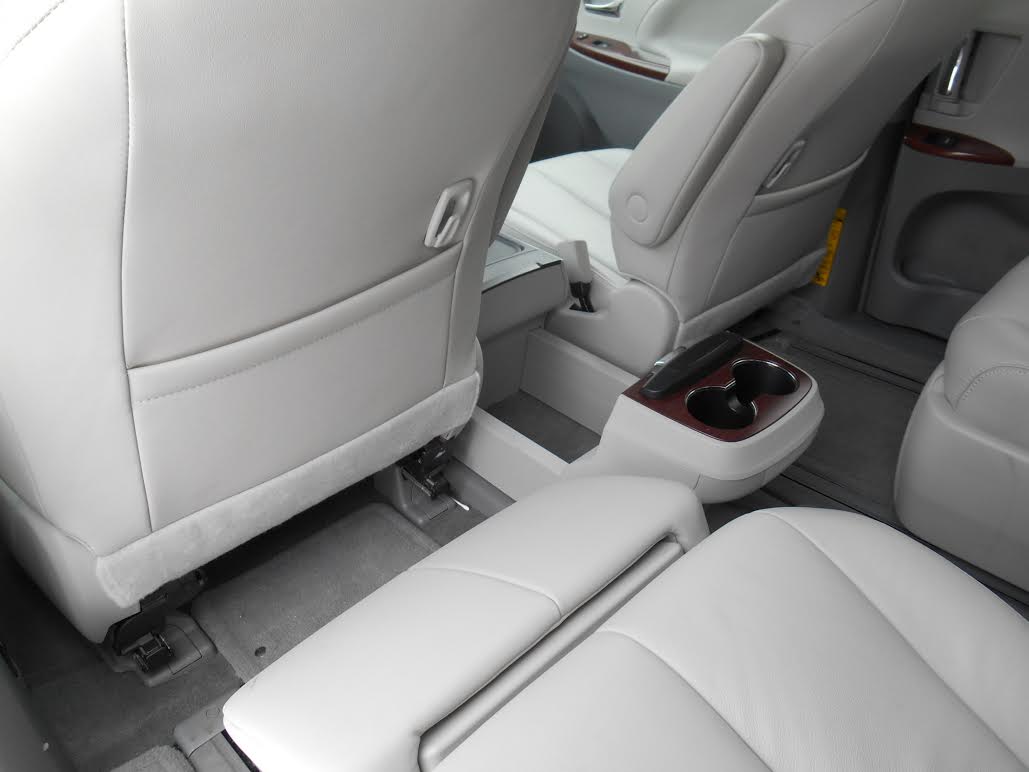 Can anything be wrong with this picture? Yes, in degrees. While the 3.5-liter dohc V6 and 6-speed electronically controlled automatic transmission teamed up to deliver very good power, in this driver’s test of 157.2 miles (69 percent of which was under city conditions), fuel economy was a middling 15.43 mpg. Also, ride can feel a little wavy and wallowing as it recovers from jolts and bumps, which you feel. Then, too, our peace and quiet were disturbed by a persistent loud squeak from somewhere in the back of the cabin, and by some body drumming.

The AWD Sienna XLE starts at $36,185 with the features discussed above, but our well-stuffed tester ballooned to $40,322 with delivery, thanks to a raft of options. Prices for most of them ranged from $29 for a first-aid kit to $500 for a blind-spot monitor/rear-cross-traffic alert. However, a substantial tech upgrade that bundles a navigation system, Toyota’s Entune infotainment app suite, larger 8.1-inch display touchscreen, enhanced audio, hands-free phone capability, advanced voice recognition, and more requires a $1735 expenditure.

Sienna’s claim to fame in the minivan market is that it’s the only one to offer available all-wheel drive. There are other points in its favor, to be sure, but those are offset by some rather odd quirks that keep it out of top-spot contention if optimum foul-weather traction isn’t that much of a concern.

As it so happens, our test Sienna was an all-wheel-drive model that indeed arrived during yet another spate of foul weather. Actually, I doubt this was a coincidence. While it didn’t seem to be as good in the snow as some AWD SUVs we’ve had in recently, it sure beat anything with just front-wheel drive, and I never got stuck, even in the deep snow piled up at the curb in front of my house. 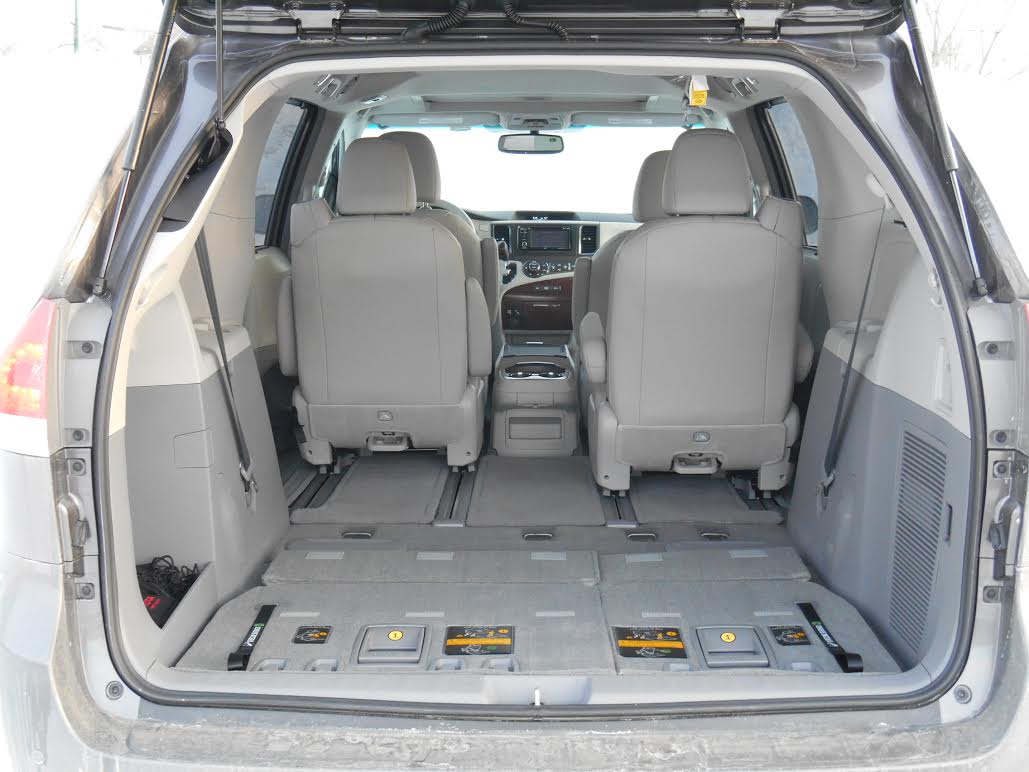 Dynamically, the Sienna is a gem. It rides more smoothly than some luxury cars (at least, with just me aboard), though that’s countered by a rather lazy, leaning sensation in turns. Fine tradeoff, if you ask me, at least for a minivan. We’ve long admired Toyota’s smooth and powerful V6, and it was joined here by an automatic transmission that kicked down quickly around town for more passing power, though it seemed just a tick slower to do so at highway speeds.

While there’s the expectedly large passenger and cargo space, the Sienna really stands out for cabin storage. There’s a decent-sized glovebox topped by a second smaller one. Two cupholders slide out of the dash, and there’s also a dash bin. There’s a drop-down bin left of the steering wheel, and a floor tray big enough to hold a large purse. A huge console box houses two more cupholders, and the back half slides rearward to reveal another huge bin and put two more cupholders closer to the rear-seat passengers. And there’s the expected map pockets in the doors. I can’t remember the last time I saw something that could hold more stuff within easy reach.

What was not within easy reach, however, were the controls. Nor were they very easy to operate. The audio’s consisted of mostly small, virtual buttons on a screen along with a lone volume knob, and those to the right were a stretch. Climate controls consisted of a rotary knob for temperature, but there were inconvenient repetitive-step pushbuttons for mode and fan speed, and those for the rear compartment were positioned far to the right, where the driver had a difficult time adjusting them. The rear view camera could “see” in a 180-degree arc – which is good – but its image was displayed on a little six-inch screen that made it tough to discern what was there. And although this is strictly visual, it’s all contained within a dashboard layout that looks asymmetrically odd to me. Even the speedometer was offset about an inch-and-a-half to the right of the steering wheel’s center.

Also asymmetrical was the seating position. For a while, I couldn’t figure out why I was kind of uncomfortable behind the wheel. Then I realized that the seat was centered about an inch-and-a-half to the left of the center of the steering wheel, and the pedals were moved far right. So I was sitting kind of sideways, and the pedal position was particularly awkward for me because I’m a left-foot braker in cars with an automatic transmission. (Of course, I have to switch to right foot in manuals.) Sitting sideways in a seat that faced straight ahead put my right leg against the seat bolster, which is what was making the position seem uncomfortable. 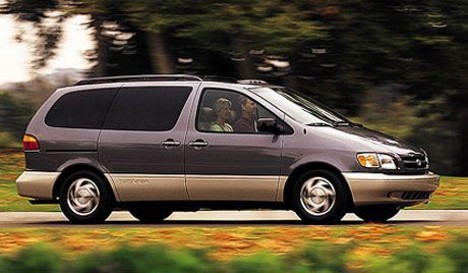 Toyota sold its first Sienna in the U.S. back in 1998. The current generation was introduced in 2011.

These elements were disappointing because I otherwise liked the Sienna a lot. And if you want all-wheel drive in your minivan (and I’m really surprised more people don’t), this is your only choice. Of course, many of those wanting AWD have probably shifted over to a three-row midsize SUV, which serves the same purpose, though not nearly as spaciously. So if that’s not a priority, the Sienna is still a good choice, but it may not be the best one.

If you average Rick’s and my fuel economy, we saw 21.3 mpg in mostly highway driving, which feels perfectly reasonable. John’s 15.4 mpg showing is just the price you pay for moving a big, powerful vehicle through stop-and-go driving. John Estimates his turn in our test Sienna included about 70 percent city driving.