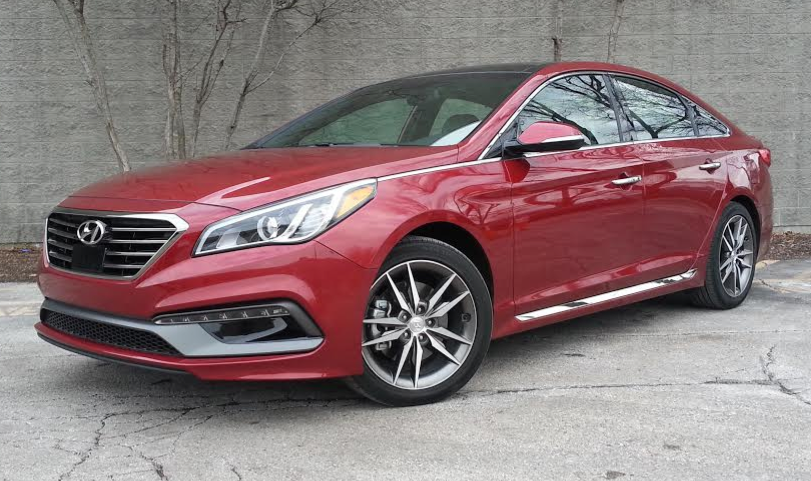 The not so good: Not as smooth riding as class leaders, some engine roughness at low speed and idle

With new styling and new technology features for 2015, Hyundai hopes to keep up the sales momentum that its Sonata mid-size sedan has established in recent years. Having driven the Sonata Sport 2.0T, we don’t see any major reason why that shouldn’t happen. 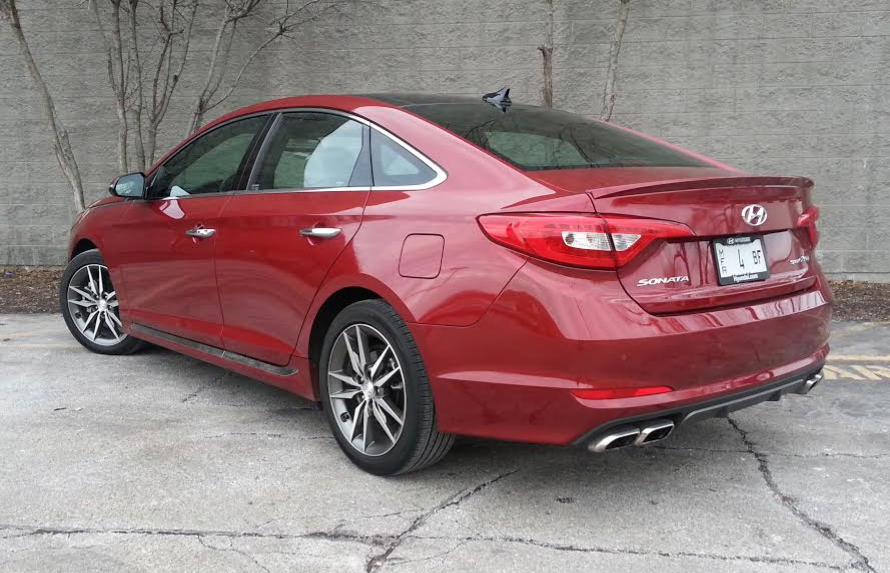 Standard on the Sport 2.0T are chrome rocker-panel strips, bright-finish exhaust tips, and a decklid spoiler.

Ride quality may still be a bit short of that found in its class rivals, and cabin materials may, in spots, be more of an approximation of rather than a match for other cars’ appointments. However, the Hyundai is pleasingly roomy and, at the higher levels, endowed with all of the hot-button technology that drivers are expecting to see these days (some of which still uses actual buttons—not a bad thing). It does all of this at very manageable prices.

Passengers ride within an airy, open “greenhouse” with excellent visibility. Front-seat occupants enjoy great front leg room. Plus, there’s pretty good rear leg room for adults, and about the closest thing to a genuine 3-abreast rear seat we’ve sat in in some time. The seat is wide enough for outboard passengers to make a little extra space for a center rider, who is treated to better than average seat padding and a low, unobtrusive floor tunnel. Head room is good front and rear, even under the optional sunroof. 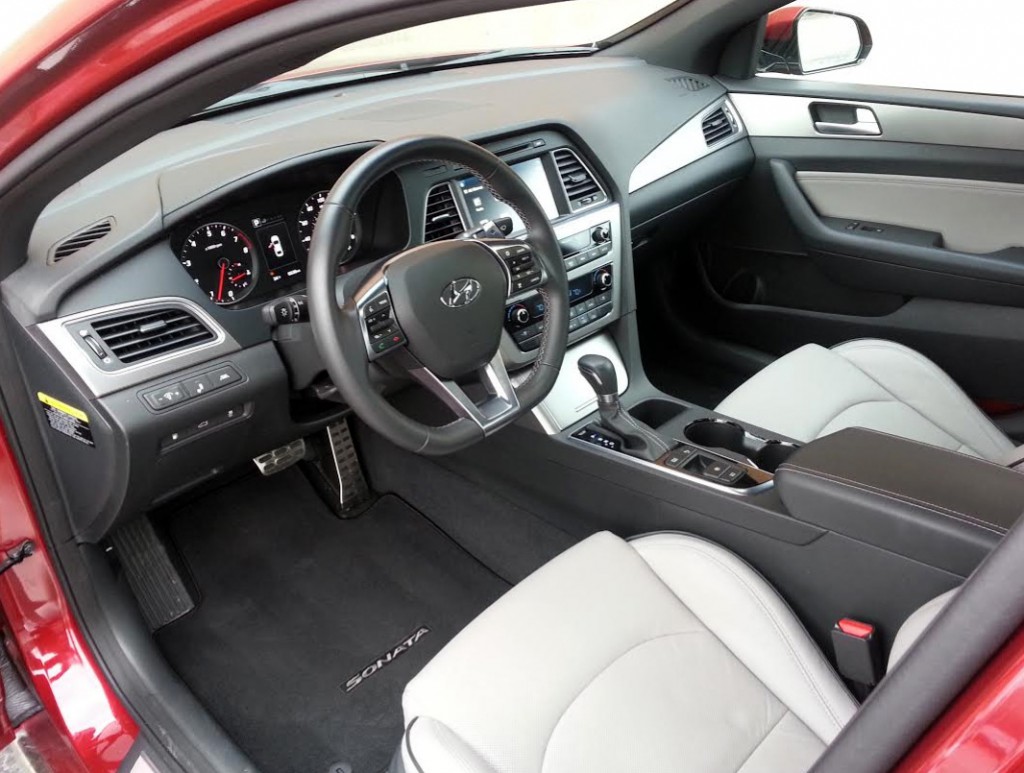 Sonata’s controls are nicely laid out and easy to use.

The Sport has its fair share of leather in the cabin, with a standard leather-wrapped flat-bottom steering wheel and shifter knob, and leather seating surfaces. The hides on the seats weren’t the plushest, and the seats, while comfortable to sit upon, needed a little more bolstering grip—and these are listed as sport seats with more side support than other Sonata seats. Soft-touch material was evident on the very tops of the doors and dash, but much of what was below them was hard plastic. The Sport 2.0T comes with vinyl patches on the door centers that matched the tan seats, exposed stitching, aluminum-faced pedals, and “3D tech”-material accents on the doors and dash. The overall look may be a little sportier than the execution.

The control layout presents big dials in front of the driver (with room for a legible optional electronic info center between them); a large touchscreen; and buttons for audio, navigation, and climate controls below. It’s easy to program audio selections, and steering-wheel buttons reduce the need to reach for the touchscreen.

Interior storage benefits from a decently sized glove box. The console has a covered bin with USB and power ports, two open cup holders, and a spacious covered cubby with a removable suspended tray. There are pockets in all 4 doors that aren’t overly big, but they all have bottle holders. Rear passengers are confronted with seat-back pouches, and there’s a wide pull-down center arm rest with cup holders molded in. A power point in the back of the console is for their use, too.

The trunk is cavernous, a welcome touch in a family car. Rear 60/40 seats fold via pulls located in the trunk. Seats fold nearly flat, but when they do, they are above the level of the trunk floor by a few inches so a little wrangling of loads may be necessary. Also complicating matters is the fact that the threshold between trunk and rear seats is somewhat restricted. 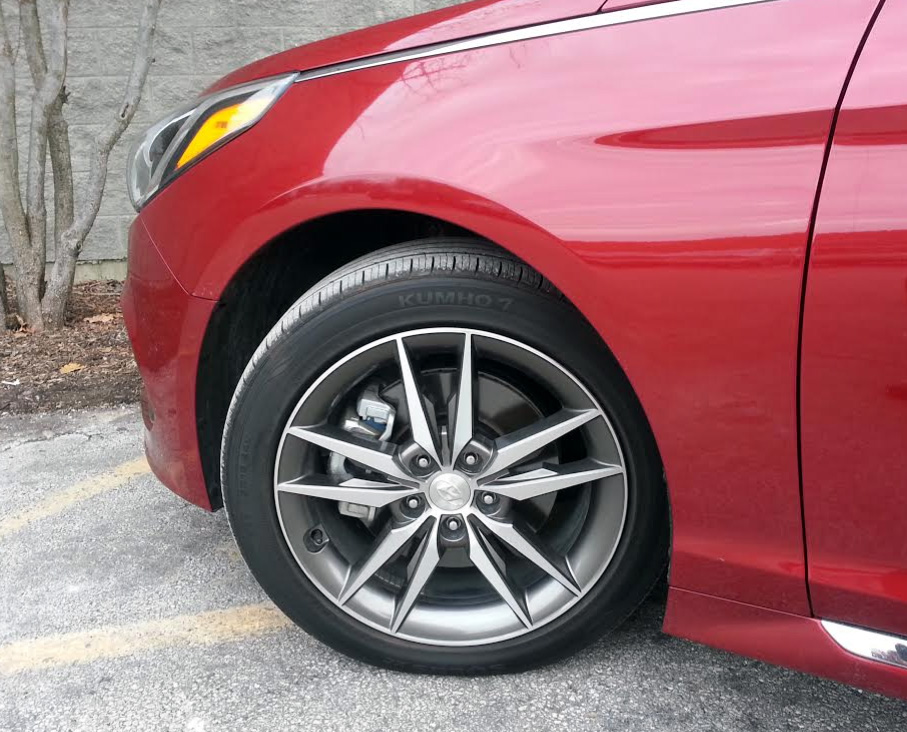 The Sport 2.0T’s 245-horsepower 2.0-liter turbocharged engine delivers pretty good performance with minimal turbo lag. Its rated torque peak kicks in at 1350 rpm, so this version of the Sonata gets away from a stop in good order, and easily keeps up elevated expressway speeds. We found nothing to dislike in the operation of the 6-speed automatic transmission. As for fuel mileage, well . . . .

The promise of the turbo 4s that so many cars are adopting is that they can at times deliver the power of bigger engines but, being 4s, go easier on gas. This driver had the CG test Sonata for a full week, which led to two fill-ups under different circumstances—but roughly over the same route and distance—that were instructive. Stint 1, carried out under the usual stop-and-go of morning and evening rush hours, covered 153.6 miles, 63 percent of that under city conditions, for 20.14 mpg. On Stint 2, working late and being able to take advantage of uncluttered expressways on the trip home reduced the amount of city-style driving to 36 percent (of 157.5 miles) and raised economy to 23.94 mpg. However, that’s not much different than what I averaged recently in a Toyota Camry with a 3.5-liter V6. Plus, it’s not up to the 2.0T’s EPA estimates of 23 mpg city/32 highway/26 combined.

The Sonata Sport is outfitted with a standard sport-tuned suspension and steering. Body control in steady-state cruising is good, but not too firm, and body lean in cornering is well handled. Braking is good, too. However, bumps are felt with a bit of a jolt and the base steering has noticeable on-center “slop.” A drive-mode selector on the console accesses alternative “Eco” and “Sport” settings. The latter adds a subtle degree of resistance to the steering but doesn’t completely fill the void at dead center.

The test car was filled out with the catch-all Ultimate Package, which delivered the sunroof, adaptive cruise control, lane-departure and forward-collision warnings, rear parking assist, electroluminescent gauges and vehicle-information display, power passenger seat, ventilated front and heated rear seats, navigation system with 8-inch touchscreen (in place of the standard 5-inch screen), and an audio upgrade among other features. The Camry had nicer interior materials, the Sonata a few more comforts that the Toyota didn’t offer. The Sonata was roomier, but wasn’t quite at the ride or handling level of the Camry XSE. All in all, the Hyundai Sonata adds up to a car that shoppers for a mid-size sedan shouldn’t overlook.

The redesigned 2015 Hyundai Sonata is a solid competitor in a very competitive class. And in Sport 2.0T form, it’s surprisingly (and satisfyingly) quick. At highway speeds, it delivers impressive passing power with no drama. The only real concession to a V6 engine is that this turbo four feels noticeably coarser at idle. 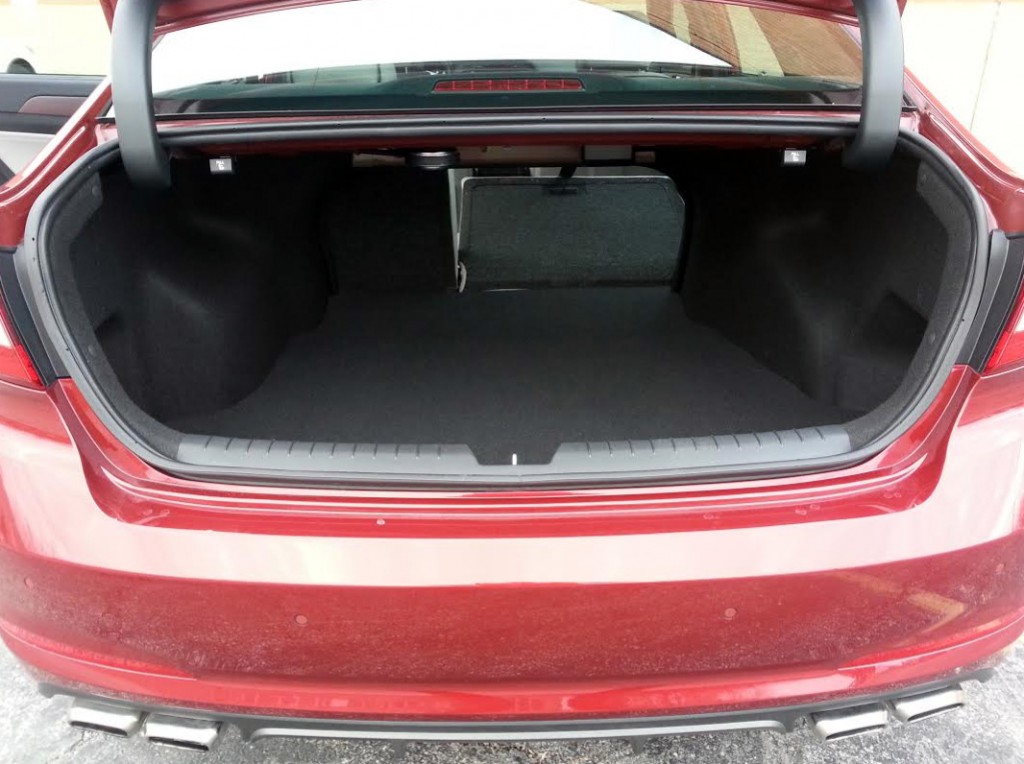 Sonata boasts one of the midsize class’s roomiest trunks.

Hyundais have typically trailed the pack in terms of suspension refinement, but this new Sonata significantly narrows that gap. Sharp bumps are handled with more composure than in previous-generation Sonatas. Meanwhile, the steering is nicely boosted at low speeds, but doesn’t offer much in terms of road feel or feedback, even in its stiffer “Sport” setting.

With the midsize sedan class as hard-fought as it is, the little details matter, and here I was impressed with the Sonata’s electronic features. The gauge cluster’s driver information center is one of the most robust I’ve seen recently, with many “value-added” functions that aren’t available on class rivals. It includes handy  “pop-up” screens, such as an indication of when the windshield-wiper speed is changed (no need to guess what position the stalk is in), and even an “Align steering wheel” warning window if the front wheels are turned sharply when the car is shifted into gear. (This might save those wheels some “curb rash” scuffing if you’re parallel parked.)  The rearview camera display is exceptionally clear and easy to see as well.

Add in a spacious rear seat, cavernous trunk, and competitive pricing, and the Hyundai Sonata is well worth checking out for most any midsize-sedan shopper.