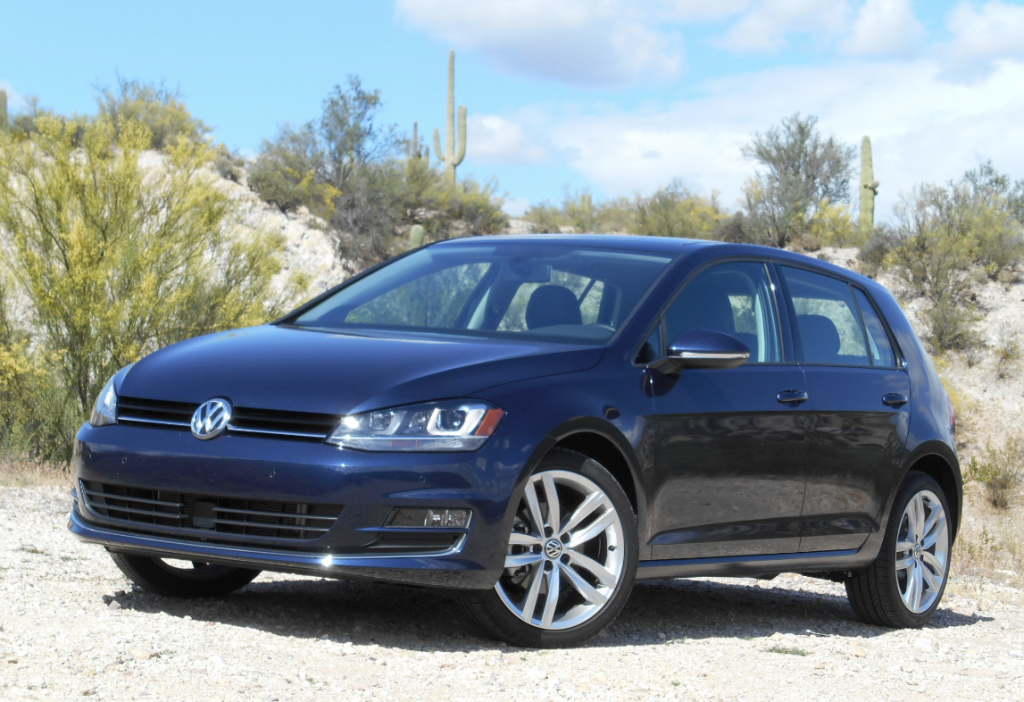 Although a substantial price cut for the redesigned 2015 Volkswagen Golf TDI leaves the base S with a starting price just over $23,000 (including destination), our top-line SEL tester started at $30,315, ending up at $32,005 with options.

The Good: Passenger room/comfort and cargo space (for a compact), road manners

The not so good: Odd powertrain behavior (with automatic transmission)

Volkswagen’s turbodiesels have made quite a name for themselves in this country, and it isn’t just based on their exceptional fuel economy. Later versions have also been rather fun to drive (in a “torque monster” kind of way), and they forfeit little of the upper-crust refinement that makes Volkswagens so appealing.

With the redesigned 2015 model, another “plus” has been added: a lower price. Whereas the 2014 edition started at $26,020 including destination, a 2015 can be had for as little as $23,165—a savings of $2855. Furthermore, fuel economy improved a bit (at least according to EPA numbers), with the ‘15’s up by as much as 3 mpg on the highway. Current figures are 31 city/43 highway with the standard 6-speed manual transmission, and 30/45 for the 6-speed automated manual—which essentially works like a conventional automatic—fitted to our test vehicle (last year’s rating was 30/42). For both 2015 versions, the combined city/highway figure (based on 55% city, 45% highway driving), is 36 mpg. 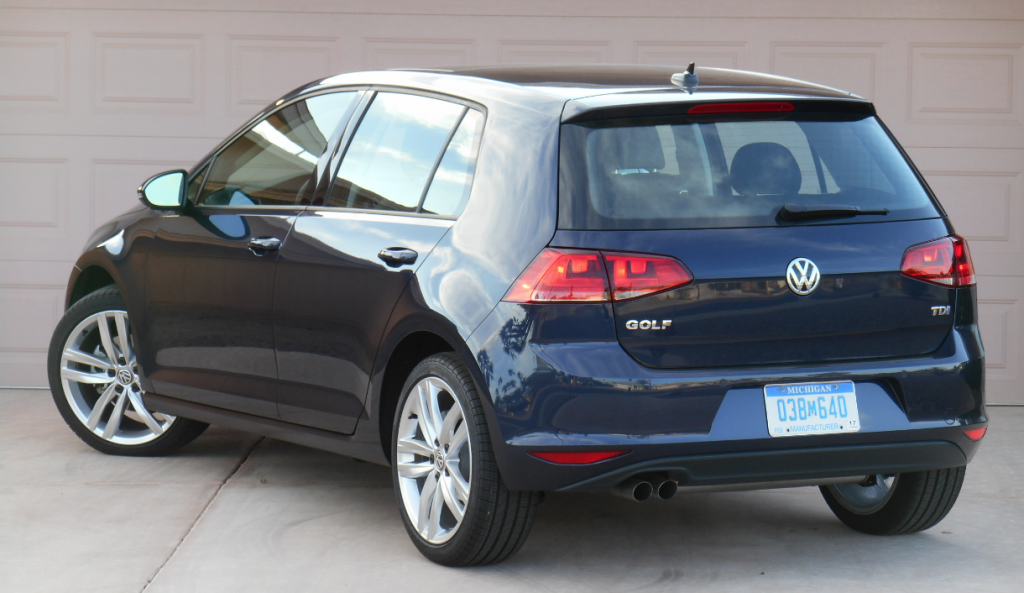 In addition to its impressive fuel economy, the Golf TDI offers a surprising amount of headroom and legroom for tall drivers, though they may have difficulty squeezing through the limited front-door opening.

That’s significant because the 203 miles covered in our test vehicle consisted of a near-even mix of city and highway driving, and the 35.4 mpg we averaged supports the EPA figure.

Although 35.4 mpg is very good for a non-hybrid car, some of the fuel savings is offset by the higher cost of diesel fuel. In the recent past, that has sometimes been enough to virtually negate the diesel’s per-mile cost advantage. Compared to the Golf’s standard 1.8-liter turbocharged gasoline engine—which carries a combined EPA rating of 29 mpg with automatic, 30 mpg with the manual—the turbodiesel numbers are about 20-24 percent better. But if diesel fuel costs 20 percent more, the only real advantage is in the turbodiesel’s longer range between fill-ups. However, at several stations in the Phoenix area where this test was performed, the difference in price between gas and diesel was only about 4 percent (and only about 2 percent back at our home office in Chicago), so the higher mileage of the turbodiesel yielded a 16- to 20-percent cost benefit.

Besides the fuel savings, some drivers also like the low-end punch the turbodiesel delivers. However, the difference between the Golf’s gas and diesel engines are less pronounced in this regard than they used to be, as the gas engine is also now turbocharged.

As mentioned, our test vehicle was fitted with the 6-speed automated manual, and that brings some drivability quirks that those with the manual transmission wouldn’t make as noticeable.

When the car is in Drive but at rest, it will roll backward if you take your foot off the brake on an incline, and sometimes, movement away from a stop isn’t as smooth as in most other cars. Neither are some downshifts when coming to a stop, though they’re often announced more by a change in note of the turbodiesel’s subtle but noticeable gravely rattle than by any surging feel.

Even in normal driving, response to throttle inputs isn’t always linear, something that takes getting used to. Floor the throttle from a stop, and there’s a momentary lag followed by modest acceleration, and then—quite suddenly—by an explosion of power about 15 feet out that will chirp the tires. At around-town speeds, dipping halfway into the throttle will result in a somewhat delayed downshift that likewise delays acceleration—and when it arrives, you might end up with more than you bargained for—but flooring the throttle brings more immediacy to the process, along with strong acceleration. However, the turbodiesel seems to run out of gas (so to speak) at highway speeds, as the same downshift timing applies, but the resulting acceleration isn’t as vivid. Thus high-speed passing power is adequate, but no more. Ditto for high-speed noise isolation, as some wind rush and road rumble filter through.

Although the TDI isn’t really considered a performance car, the tested top-line SEL was fitted with some decidedly performance-oriented tires. That probably didn’t help it in the ride department. Whereas the base S gets 205/55-16s and the midline SE rides on 225/45-17s, the SEL—which is supposed to be the most “luxurious” version—had 225/40-18s. Those short, 40-series sidewalls don’t tend to soak up minor road imperfections as well as the “taller” 45- and 55-series tires fitted to lesser models, something that was particularly noticed on small bumps and tar strips. Larger bumps were adequately soaked up by the firm but relatively compliant suspension–with some producing a certain amount of jiggling–but those seeking ride comfort might want to look to a lower-level model. On the positive side, the SEL feels somewhat more sporty in cornering maneuvers than might be expected, making it a satisfying car to drive. 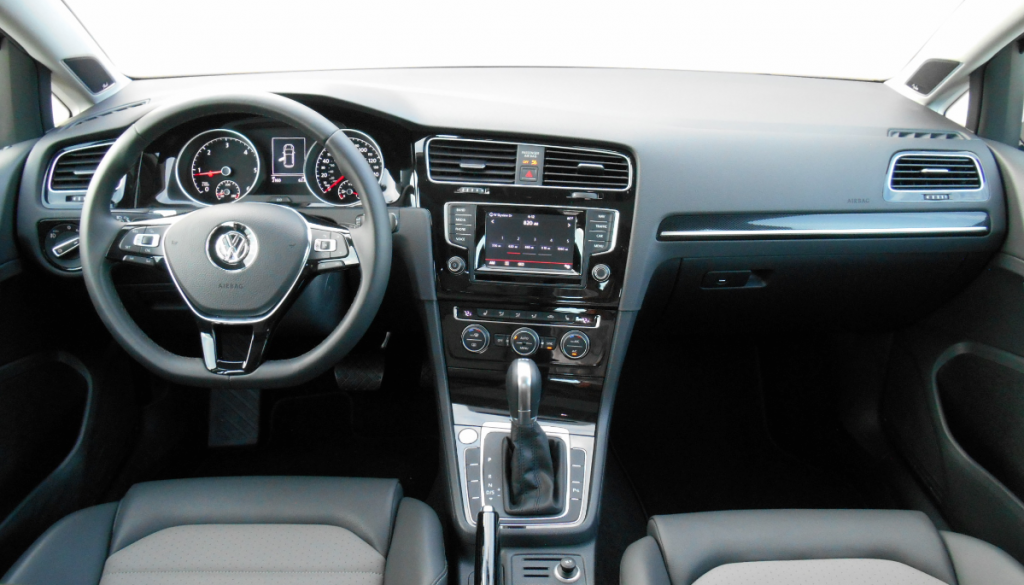 Volkswagens typically offer upscale interiors, and the Golf is no exception, with clean lines being joined by rich materials and stately if subdued trim. Audio and climate controls are unusually convenient thanks to high mounting and easy-to-use buttons and knobs.

In most other ways, the TDI is as refined and practical as other Golfs. A gargantuan amount of front headroom and legroom can be summoned by putting the seat all the way down and back, though the taller drivers that would accommodate may find it difficult to get out through the rather narrow doors. (TDIs come only in 4-door versions, while gas models are offered in 2-door variants that have a wider door opening.) They may also find that rear-seat legroom behind them—which is quite good with a normal-size person in front—has virtually disappeared, making the rear seat useful only for pets and cargo. A nice “oddity” on our SEL tester was front-seat lumbar adjusters on both the driver and passenger seats.

Thanks to fairly thin roof pillars, visibility is good to the front and sides, a bit less so to the rear corners, where the SEL’s rearview camera helps (it’s standard only on SE and SEL). Audio and climate controls are some of the simplest in the business, with large, handy pushbuttons and rotary knobs adjusting most basic functions. Volkswagen has long justified some of its slightly upper-crust prices with near premium-level appointments, something that applies here thanks to rich-looking materials and many padded surfaces. Better-than-average interior storage is provided by a small glovebox, a covered forward console bin with iPod jack, two open console cupholders, a small console bin with 12-volt plug, a large drop-down left-side dash bin, and large map pockets in the doors. Oddly, there’s no USB or Aux jack. 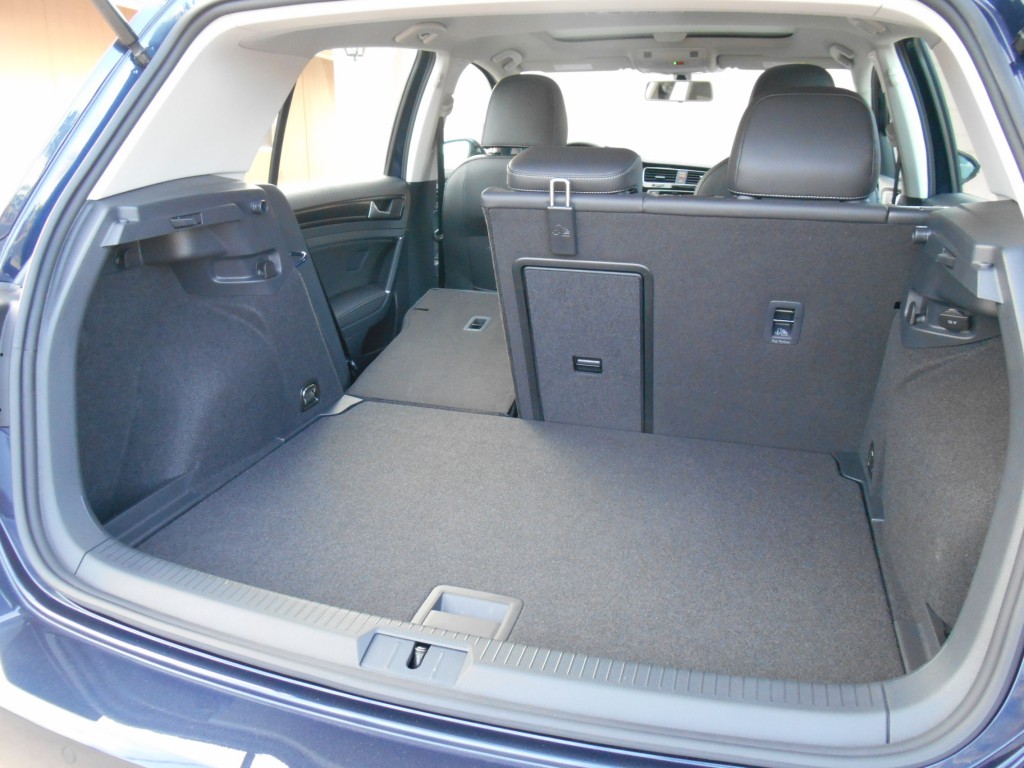 There’s a surprising amount of nicely cubic cargo space behind the rear seat, and the seat backs fold level and nearly flat to enlarge the area to near-SUV capacity.

Cargo room is equally impressive. The cargo area is wide at the rear (for golf clubs) and there’s a good amount of space behind the rear seats. Those seat backs fold level with the cargo floor and nearly flat to expand the capacity, and also include a ski pass-through. However, unlike in many cars, there’s no formal under-floor storage space; just a bit of room around the spare tire.

Overall, the Golf TDI remains a thrifty car that doesn’t sacrifice luxury, room, or performance to achieve that economy. And with 2015’s price drop, it doesn’t require you to part with as much of your money to get it.