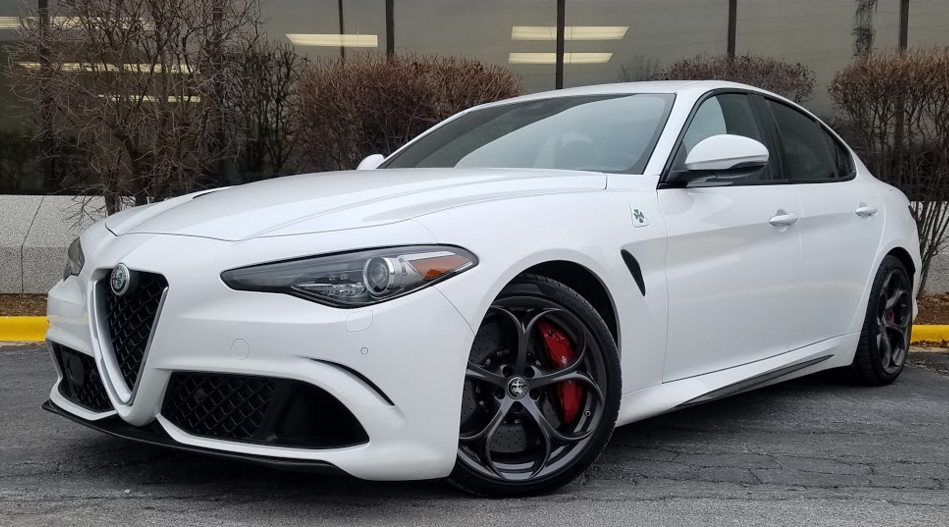 The not so good: Control logic/layout, cargo versatility

If it were to come out that the Alfa Romeo Giulia Quadrifoglio was designed by a racing engineer who had never driven a car on the street, that would explain a lot. 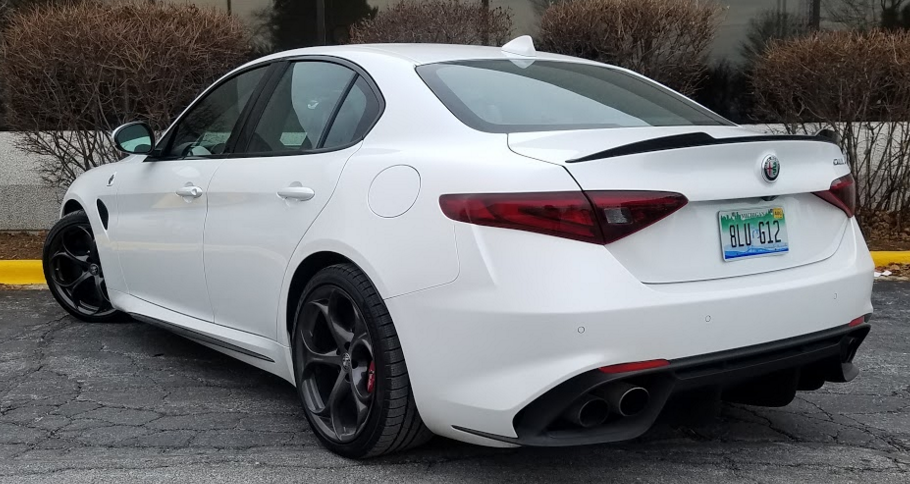 Alfa’s signature 5-hole wheels (the dark ones shown being a $500 option) leave plenty of gaps through which to view our test Quadrifoglio’s $8000 carbon-ceramic brakes hosting huge red calipers.

It would explain, for instance, how Alfa managed to squeeze 505 horsepower from a mere 2.9 liters of displacement, why the transmission shifts both up and down with such snappy precision, why the steering feels so razor sharp, and how the suspension manages to combine deft handling with a reasonable degree of ride comfort.

It would also explain a number of other things … such as why so many elements of the Giulia Quadrifoglio seem as though they were addressed with either ignorance of common automotive practice or an air of abject indifference.

While John and Damon brought up some of these “features” in our original Test Drive report, it seems to me they missed a few – likely because our time in that car was very limited – so after my recent first drive, I thought I would add some of my own.

Ingress/egress and seating space may be a bit tight for larger folks, but it’s about on par with other compact sedans. However, shorter drivers may find that the seat doesn’t go up as high as they’d like, and all drivers might miss the absent nub on the shoulder strap (one from another car is shown at right) that keeps the buckle from falling to the floor.

Let’s start with the act of entering and getting yourself situated. Damon (all 6’6 of him) mentioned that climbing across the rather wide doorsill/rocker-panel extensions and through the smallish door opening was a bit of a challenge, though it wasn’t so much for me (just 5’9). But after landing in the driver seat, I was surprised that both the seat’s fore/aft and backrest tilt are manual adjustments … on a car that starts at $72,000. Only height is powered, and shorter folks – which includes me in this case – may find the seat doesn’t go up as high as they’d like, leaving them in a Kilroy-esque driving position. Then when buckling the seatbelt, I discovered that – unlike virtually every other car on the planet – there’s no nub on the shoulder-belt strap to keep the buckle from falling to the floor. Which means you have to reach down and dig for it … every single time you get in.

Though certainly handy, the red start button just to the lower left of the steering-wheel hub is unique in its placement – and one of the only examples here in which “different” actually translates to “better.” Press it, and the engine fires with a nice roar and settles into a slightly rough idle. 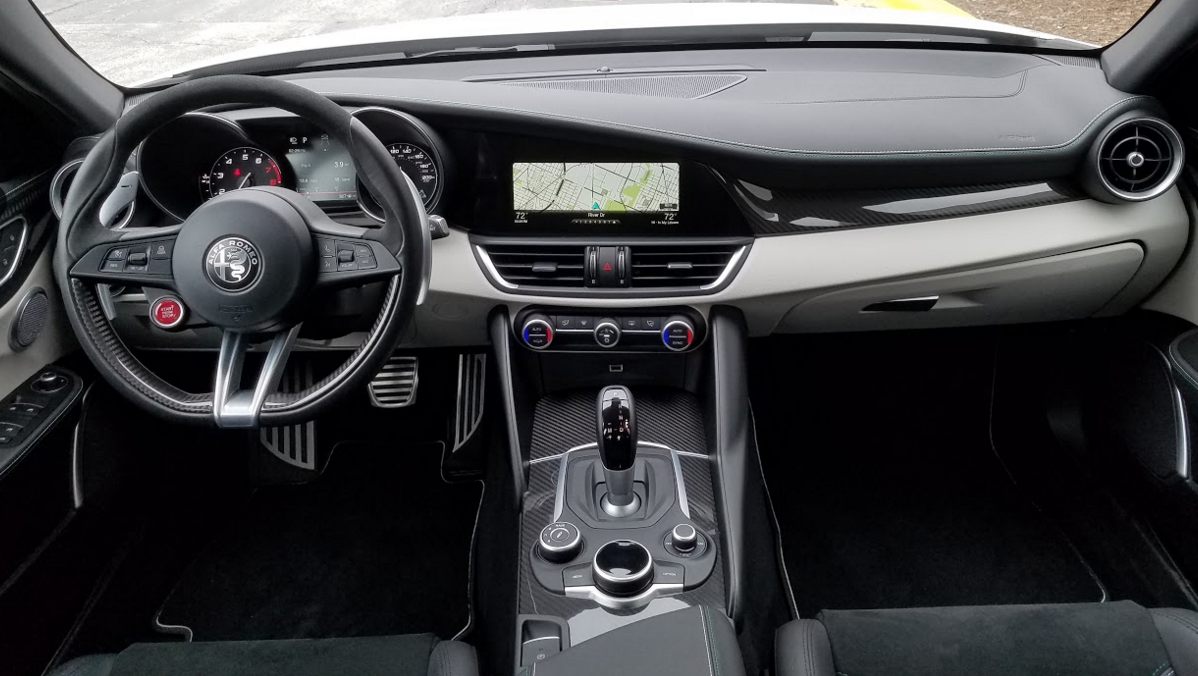 The red starter button to the lower left of the steering-wheel hub hints at the Giulia Quadrifoglio’s racing pedigree, but the rest of the interior boasts near luxury-car refinement.

But if the front end is anywhere near an obstruction — and that can be just about anything, including a parking-lot curb — a very intrusive beeping is triggered by the front obstacle detection system. (Spoiler alert: You’ll be hearing – and annoyed by this – a lot, as it seems to take every conceivable opportunity to make itself known, even if the car is in Park.) Then you reach for the console gear lever, and … it’s the weird “joystick” type. Now, other manufacturers have used this design – such as Alfa Romeo’s distant Jeep cousin – but that doesn’t make it any more intuitive, and some have reverted to a more conventional lever. Keeping in mind that this Alfa may not be your only car, it might take some brain-cell function to remember that you push the lever forward for Reverse, back for Drive, and hit the button on top for Park. It’s that last one, in particular, that can trip you up, as the normal “push it all the way forward for Park” will put the car in Reverse – potentially with less than hilarious results. 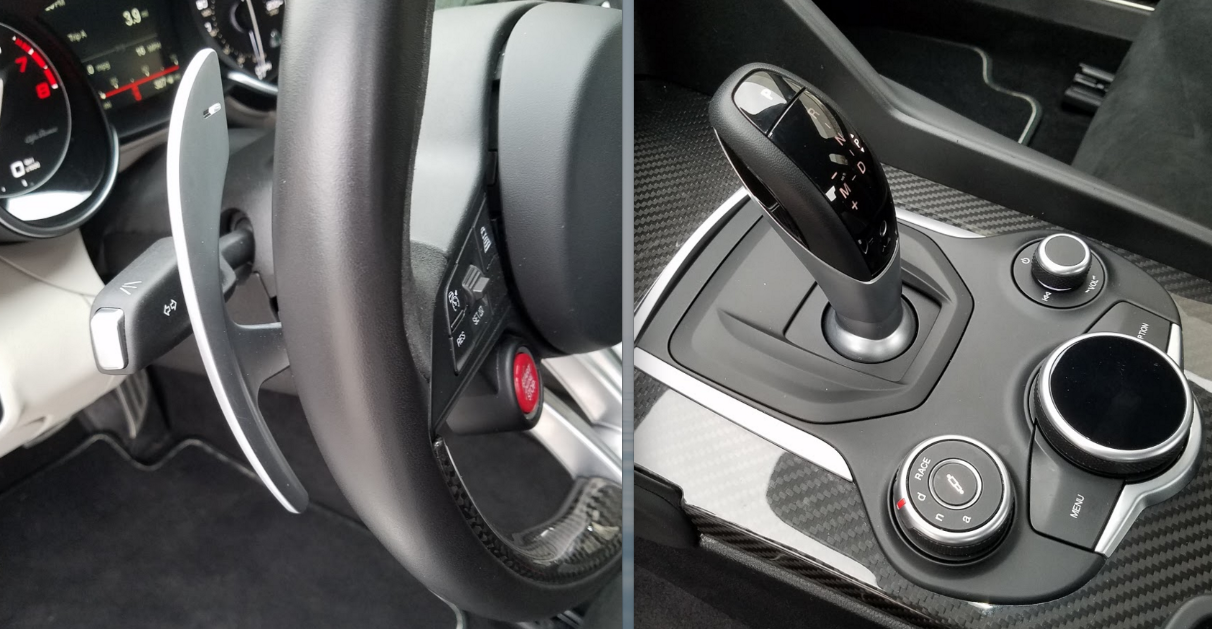 Left: That’s the turn-signal stalk hidden behind the elephant-ear shift paddle, the latter of which partially blocks access to the former. Right: The shift lever uses an odd (though hardly unique) “toggle” action, and the console knob struggles to control all its assigned functions, with too few buttons to help.

But you’ve got it in Reverse (with the front obstacle detection still blaring), and you notice that only the right half of the large dashboard screen is dedicated to the rearview-camera’s image, resulting in a very small picture of what’s behind. Sigh ….

Then you put it in Drive and you’re rolling. You head down the road toward your upcoming left turn, and in anticipation, go for the turn-signal lever – which takes maneuvering your fingers past the huge shift paddle to reach. Traffic is tight, so you come to a stop, ready to spurt through any opening you can get. It finally comes, you turn the wheel, hit the gas, and … no “spurt.” Oh, the car moves all right, just not with the pull of the promised 505 horses … until you’ve crossed through the intersection and then WHAM! Ah … there they are. Granted, the fact that the car is rear-wheel drive means you probably couldn’t transfer much power in that circumstance anyway, but it still feels surprisingly lethargic off the line.

Then it starts to rain, and you reach for the nearly universal right-side stalk (which, like the turn-signal stalk, is partially obscured by a large shift paddle) to activate the wipers, only to discover that this, too, doesn’t work the way you’d expect. So – word to the wise – figure this out before you really need them.

As you come down a short entrance ramp to the highway, you look to your left and … see only a thick roof pillar. But – thanks in part to terrific merging power – you manage to squeeze into the flow of fast-moving traffic. How fast? Hard to tell at a glance; the small-diameter speedometer goes up to 200 mph, yet the sweep of the needle only covers about ¾ of its circumference, so it takes good near vision and some concentration time to decipher your exact speed. 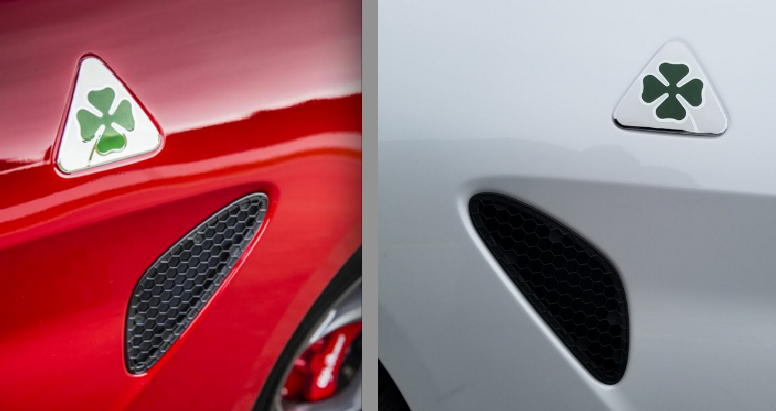 Fun fact: The racing-inspired cloverleafs on each front fender are not the same; they differ in that their respective stems face toward the rear of the car.

Now you’re cruising, and it’s time to call up your favorite radio station. Not so fast. For unless you’ve mastered the extremely complex (and totally unique) procedure for selecting a band and tuning in stations – which first requires either long study or a cruise through your owners manual – and committed the proper sequences to memory, this is not going to be as easy as it sounds. (If indeed, as it seems, all the premium makes are in a competition to see who can make this the hardest, Alfa may well be winning.) But should you be concerned that – even after you’ve mastered the procedure – the time spent with your eyes off the road might leave you … well … off the road, not to worry; the Giulia’s lane-departure warning is both hypersensitive and hyper-loud.

Although it’s hardly the only car in this class to not have a folding rear seat back to expand the cargo area – or even a trunk pass-through – it’s still a bit disappointing. And there’s no added under-floor space, either, so “utility” is really not a strong suit here. 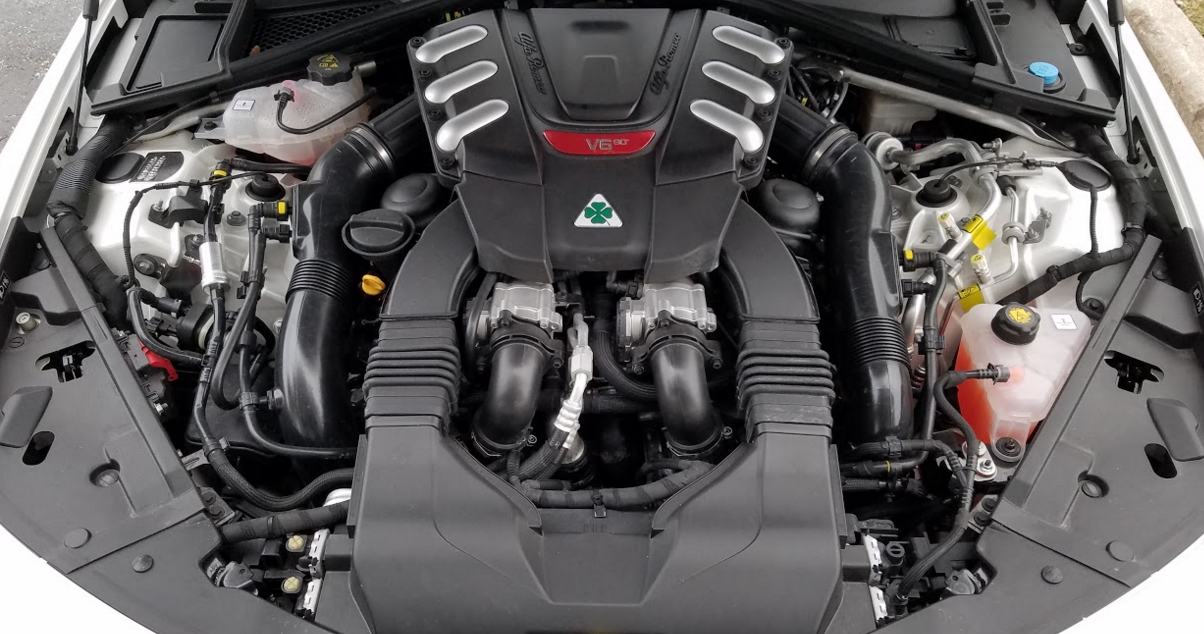 Star of the Quadrifoglio show is its twin-turbo 2.9-liter V6 that puts out a neck-snapping 505 horsepower.

But that’s not to say nothing is. In fact, as insinuated up top, there are many reasons for that surmised racing engineer to be amply proud. Despite the car’s rather lackluster full-throttle launch (which might be improved by torturing the driveline in ways I’d rather not), I timed the Quadrifoglio at a blistering 4.35 seconds to 60 mph, punctuated by a neck-snapping surge about 20 feet off the line. Add in the quick steering and fine suspension tuning, and overall dynamics really can’t be faulted. Furthermore, a few of the criticisms leveled may be dismissed by some as merely “personality traits,” others by the limitations imposed by being a compact car. And the interior materials can’t be faulted, either, even for the rather lofty price.

Which brings up the question of value. Yes, a 72-grand ante is a staggering amount for a car in this class, with our tester’s bottom line of just under $90,000 choke being even more so. But that base price includes a lot of features that are optional elsewhere, and the total a number of items that really aren’t in any way necessary. And when the car in question is quite likely the quickest and most dynamically capable one in its class, well … just about any amount can seemingly be justified.

Alfa’s Giulia Quadrifoglio might well be the most potent compact sport sedan around, and nothing about its appearance says otherwise. Sure, it has its quirks — and its cost — but it’s a serious road car that’s an absolute thrill to drive.