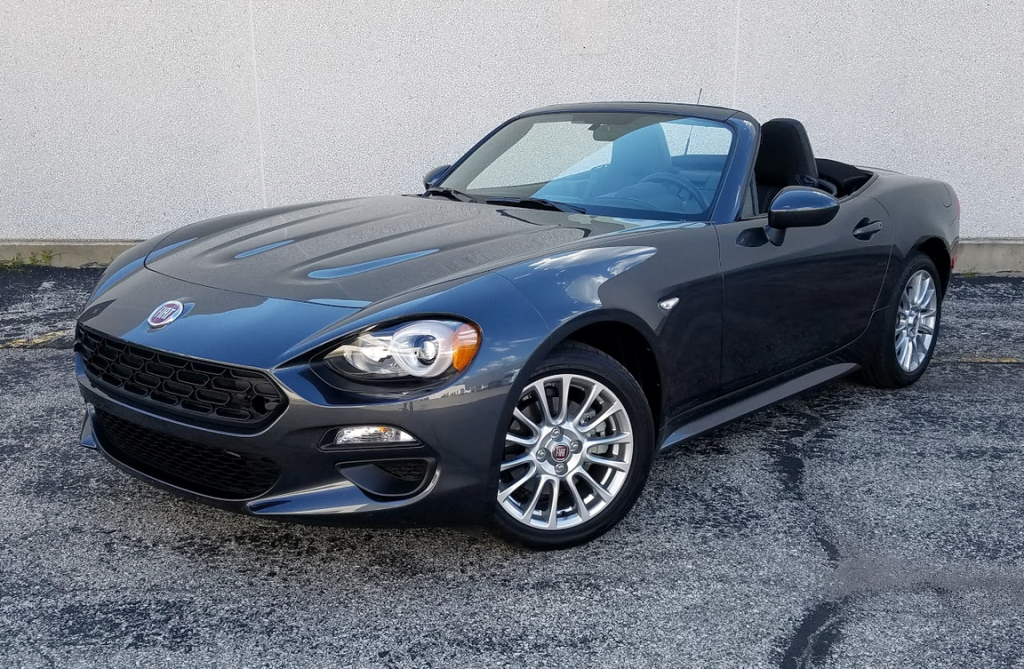 The not so good: Control layout, highway noise, interior and cargo storage space

There’s no doubt about it: The biggest, clearest difference between the Fiat 124 Spider and the Mazda Miata is under the hood. Mazda builds both cars from the new-for-2016 Miata platform. Yes, there are different styling approaches—the Fiat looks back nearly 50 years with references to its Pininfarina-styled 124 roadster, while an edgier Miata moves beyond the soft-sided lozenge look of its first quarter century—and slightly altered interior treatments. Nothing, however, separates the two cars like their engines.

Like its Miata cousin, one of the 124 Spider’s slickest features is its easy-to-use manual soft top.

Where the Mazda has a 2.0-liter naturally aspirated 4-cylinder powerplant, the Fiat runs with the 1.4-liter turbocharged “MultiAir” engine found in practically all of the Italian automaker’s products that are sold in the USA. Rated at 160 horsepower in base form, the Fiat four has just five more ponies than the Mazda engine, but the real difference is in the torque that gets the car moving. The Mazda mill tops out at 148 lb-ft of twist but the MultiAir can summon 184 lb-ft of the stuff. 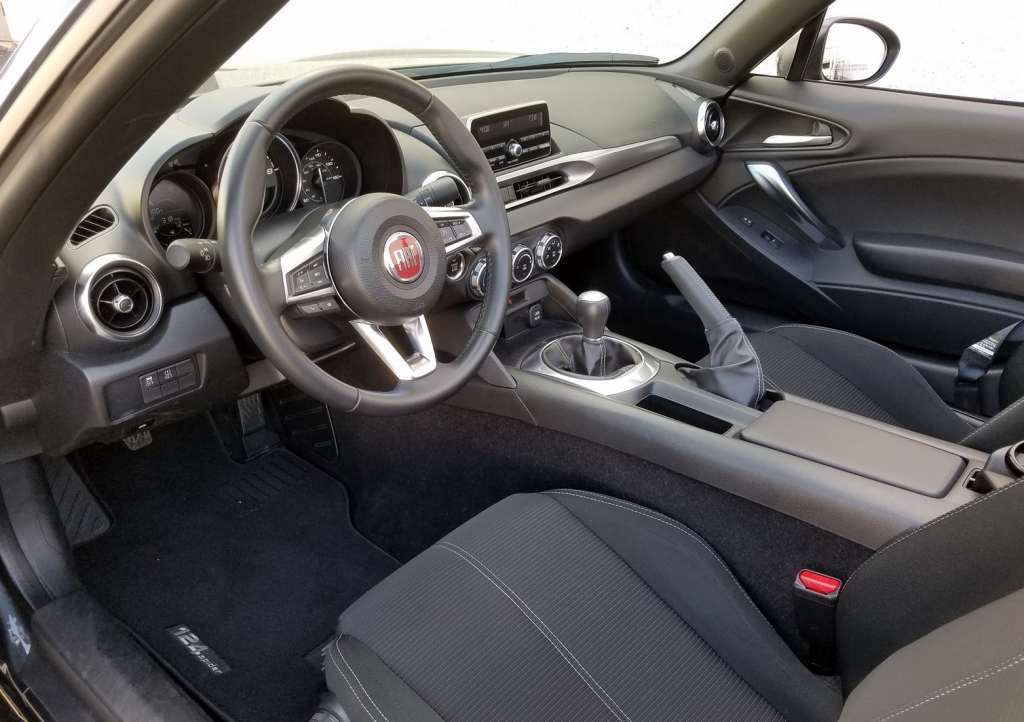 There’s precious little space inside the 124 Spider for passengers or personal items, but the cabin is nicely appointed for the price point.

The added power is no illusion. The 124 Spider feels stronger than its Miata cousin, particularly from a standing start, and isn’t terribly taxed in highway cruising. (Rolling along on the Interstate, this tester even found a modicum of leftover “go” lurking with the car in 6th gear.) In terms of sound, there’s a deeper rumble to the Fiat engine than to the Mazda unit that, to this driver’s ears at least, isn’t as sweet as the Miata’s purr. Also, the 124 Spider drains off revs kind of quickly once the right foot lets up, so it’s incumbent upon the driver of a stick-shift Spider to downshift to stay in the engine’s sweet spot.

That shifting happens with a standard 6-speed transmission blessed with short, direct throws, which makes for a high degree of driving fun. Compared to the Miata, the Fiat’s clutch seemed heavier to this driver, making it a touch more complicated to modulate, especially from a standstill. Of course, you can avoid this altogether by shelling out $1350 for the optional 6-speed automatic trans. In either combination, the 124 Spider is rated by the EPA at 26 mpg in city driving, 35 mpg on the highway, and 30 combined. Yours truly put 139.5 miles on Consumer Guide®’s test car, and with 50 percent of that in city-style operation he saw 27.6 mpg. 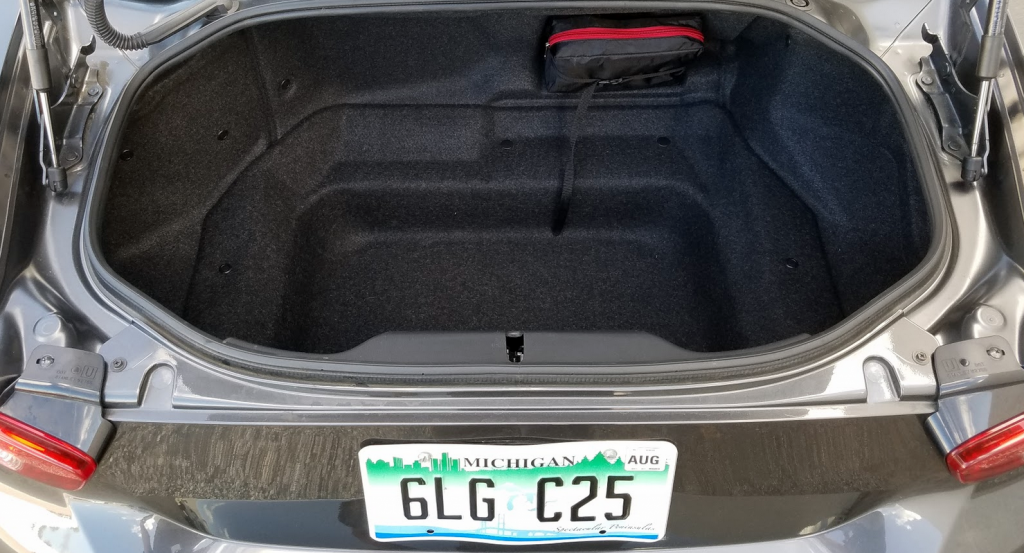 Because of its extra overall length, the Fiat 124 Spider boasts a little more trunk space than the Mazda Miata.

CG’s test car was a Classica, the “base” model in a three-step lineup that includes plusher Lusso and racier Abarth versions. In a world of vehicles increasingly steeped in connectivity and safety technologies, it was a treat to pilot something that didn’t ask anything of the driver but to work the gas, brakes, shifter, and steering wheel. There were no beeping alerts, self-correcting steering, “Sport” modes, or tip/tap/twist controllers to govern audio and navigation—though if you must have those things, some of them are available in option “collections” for the Lusso and Abarth. Classica standard equipment includes 16-inch silver-painted aluminum wheels; 195/50R16 “three-season” tires; AM/FM Bluetooth radio with 3-inch display and four speakers; projector-beam halogen headlamps; leather-wrapped steering wheel, shifter knob, and handbrake lever; LED taillamps; manual air conditioning; cloth seats with manual adjustment; push-button starting; and remote keyless entry.

The Miata and the 124 Spider share a 90.9-inch wheelbase and are within tenths of an inch of each other in width and height, but the Fiat is 5.5 inches longer overall. Still, driving dynamics and cabin packaging are nearly identical. Steering is light and quick to respond; there’s nice balance in cornering and changes of direction; ride is suppler than you might expect from a small, low sports car; and braking is quick and sure. Occupants drop into their seats, and drivers grip a steering wheel that adjusts up and down but not fore and aft. However, doors open wide to improve entry and exit, and the single-lever fabric manual top can be one-handed up or down from inside the car in a matter of seconds. There’s not as much of a top-up blind spot as in some convertibles, and with the top down it’s still possible to carry on a conversation at highway speeds. 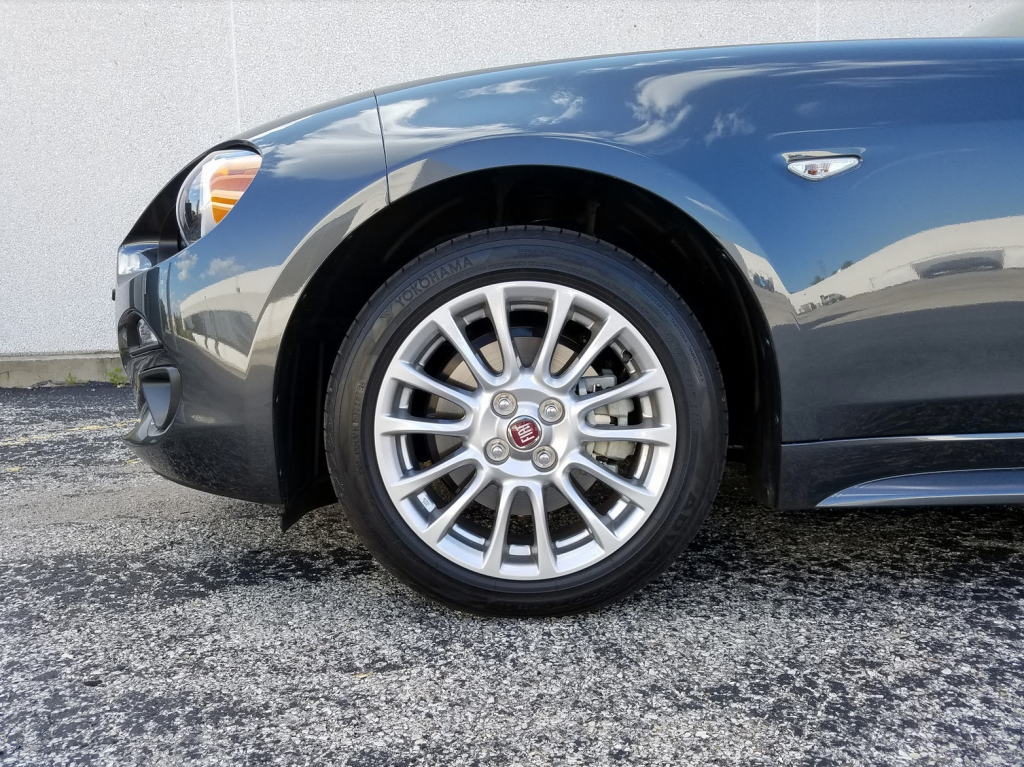 To the padded dash top already found in the Miata the Spider adds lightly padded upper door trim and silver interior accents. The arrangement of three analog gauges and three easy-to-operate climate-control dials is the same in both cars. The radio display is on a screen that rests at the top center of the instrument panel. The base radio in the test Spider had all its setting buttons on the face of the screen, but the optional upgrade features Mazda’s complicated console-mounted Commander Control, which frees up all of the display screen for visuals.

There’s precious little storage space in the Miata/Spider cabin: a shallow covered bin in the console, a small lockable glove box between the seat backs, and cup holders on stems that are inserted into console slots. Due to the Spider’s added length, Fiat claims more trunk space, but it’s hardly cavernous back there, and loading is still essentially a matter of dropping things into a hatch.

The Classica starts at $24,995, which is extremely competitive with the Miata. CG’s test car had no options but even then there aren’t many for the base car—just the automatic transmission and the $1295 Technology Collection with central controller and larger audio display, rearview camera, and proximity keyless entry system. Even jumping up all the way to the Abarth still keeps the starting tab well under $30,000. Thus, if you’re trying to decide between one affordable roadster and the other, it really does come down to the engine. 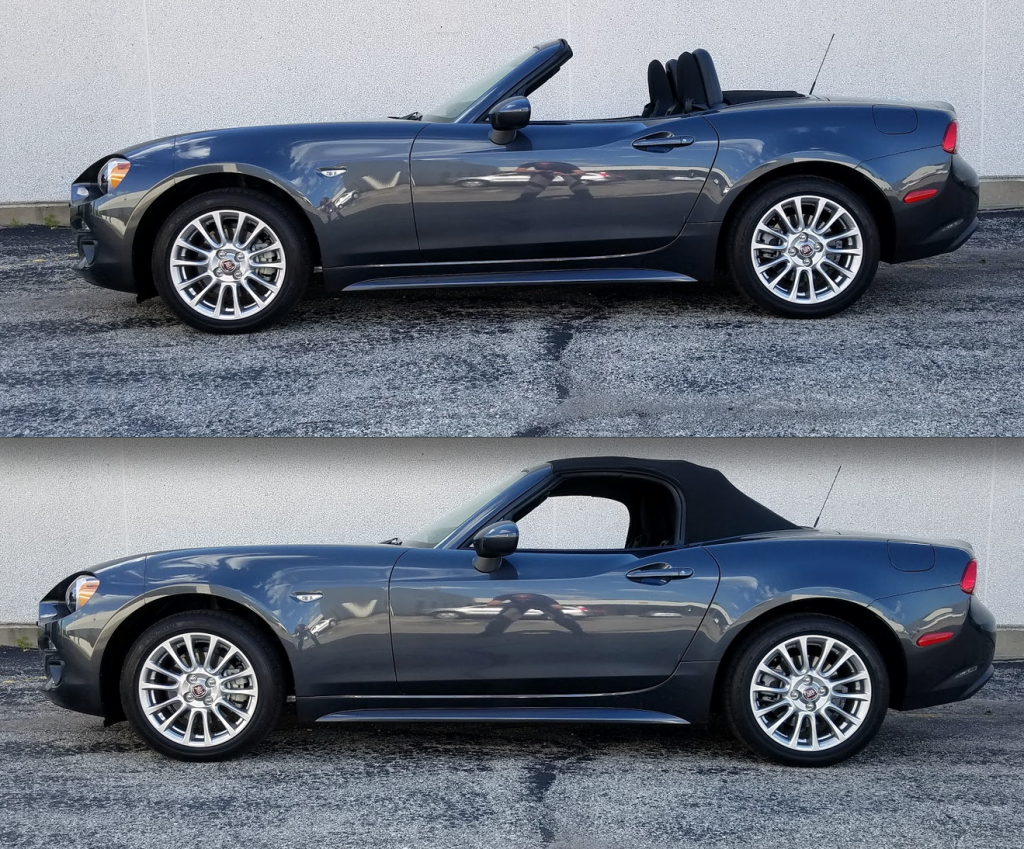 Though the 124 Spider and Mazda Miata share a chassis, every body panel on the Fiat is unique. The Spider’s slightly classier lines might appeal to shoppers who find the Miata’s styling too aggressive.