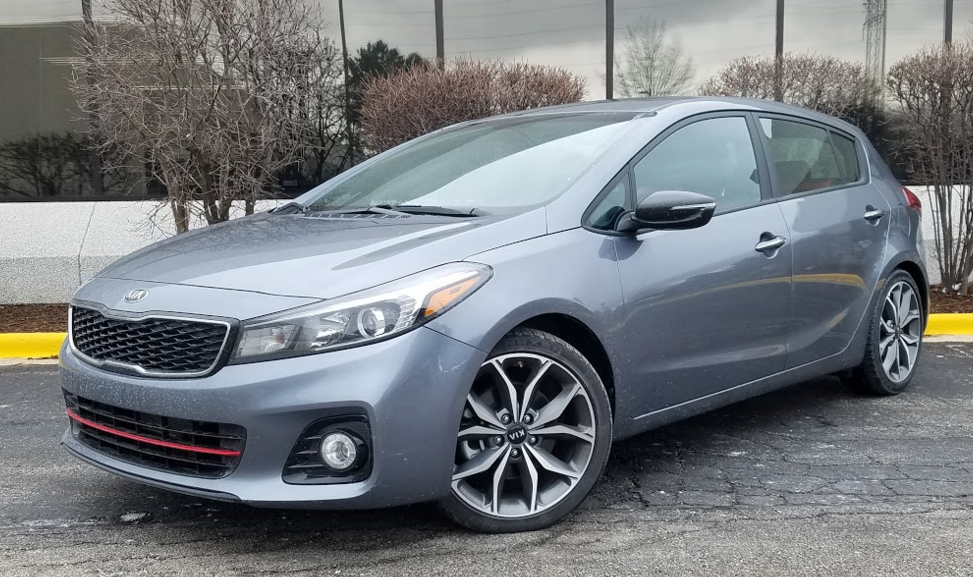 The not so good: Lacks some high-tech safety features

Although our test vehicle was a 2017 model, there were few changes of note to Kia’s Forte5 for 2018, so our review should apply to what you’ll find at dealers today.

Kia’s compact was freshened for 2017, and earlier we covered a base Forte S sedan with an economy-minded 147-horsepower 2.0-liter engine (also offered is a less-economy-minded 164-horsepower version) mated to a 6-speed automatic transmission. But this test is of a model at the opposite end of the Forte spectrum: a top-line Forte5 (the “5” denoting the hatchback body style) SX with a 201-horsepower 1.6-liter turbo — an engine exclusive to the SX hatch in the Forte lineup — mated to a 6-speed manual transmission. 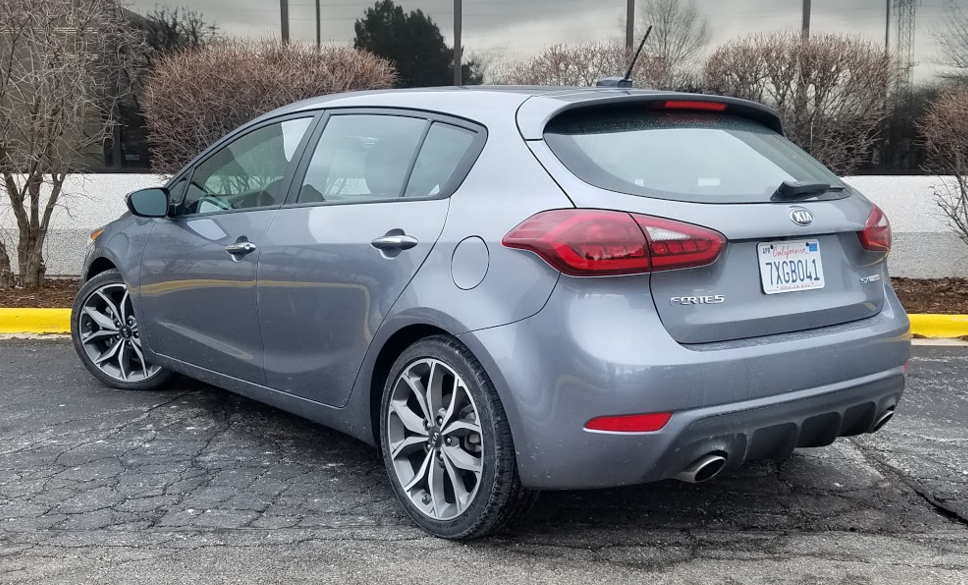 SX is the sporty Forte, equipped for the part with gutsy turbocharged engine, 18-inch wheels, and dual exhaust outlets.

Although Forte5 hatchbacks start at just over $19,000 (including destination) with the standard 6-speed automatic, our SX added a host of features that had it starting at about $27,000 — and pretty much ending there. Most items come in on the mid-line $23,000 EX, such as windshield wiper de-icers, automatic headlights, UVO infotainment system with 7-inch touchscreen and Apple CarPlay/Android Auto, keyless access and starting, heated front seats, and padded door tops. But our SX tester also had leather upholstery, ventilated front seats, 10-way power driver seat with lumbar adjustment and memory, dual-zone automatic climate control, satellite radio, navigation system, power sunroof, chrome dual exhaust tips, and 18-inch alloy wheels. Note that for 2018, the base price of the SX has been cut by about $2000 with an attendant reduction in standard equipment, with the remaining features moved to the options list. Although not on our tester, safety options include blind-spot alert, lane-change assist, and rear-cross-traffic alert. Oddly missing from the options list — and increasingly available elsewhere — are forward collision warning and mitigation, and lane-departure warning and mitigation.

What’s perhaps most impressive about the Forte5 SX are its performance and its surprising list of luxury/convenience features. The engine is a model of smoothness — pulling without vibration from 1000 rpm (low for a car with manual transmission) — while also delivering a strong dose of turbocharged gusto with a great (though perhaps too muted) exhaust note, and the manual transmission is a joy to use. The ride can get a bit stiff, as is the norm with sporty models, but the SX pays it back in handling prowess.

An unexpected nicety was the SX’s orange-trimmed leather front seats boasting both heat and ventilation. In addition, a memory function for the power driver seat keeps track of the various settings, including the unusual tilt cushion and adjustable lumbar support — all very high-end touches.

Then there are the features. It’s really unusual to step into a compact car and see a 10-way power seat with adjustable-angle seat cushion and adjustable lumbar support, along with memory to keep them all straight if the car is driven by more than one person. The front seats are also heated and ventilated, the latter also unusual. Lots of surfaces are padded, including the door tops and — quite unusually — the face of the dashboard, and contrasting orange panels set off the black leather seats, while aluminum-look pedals add to the sporty vibe. If there’s anything here that doesn’t impress, it’s the visibility, which — due to thickish roof pillars — is fair but hardly great. 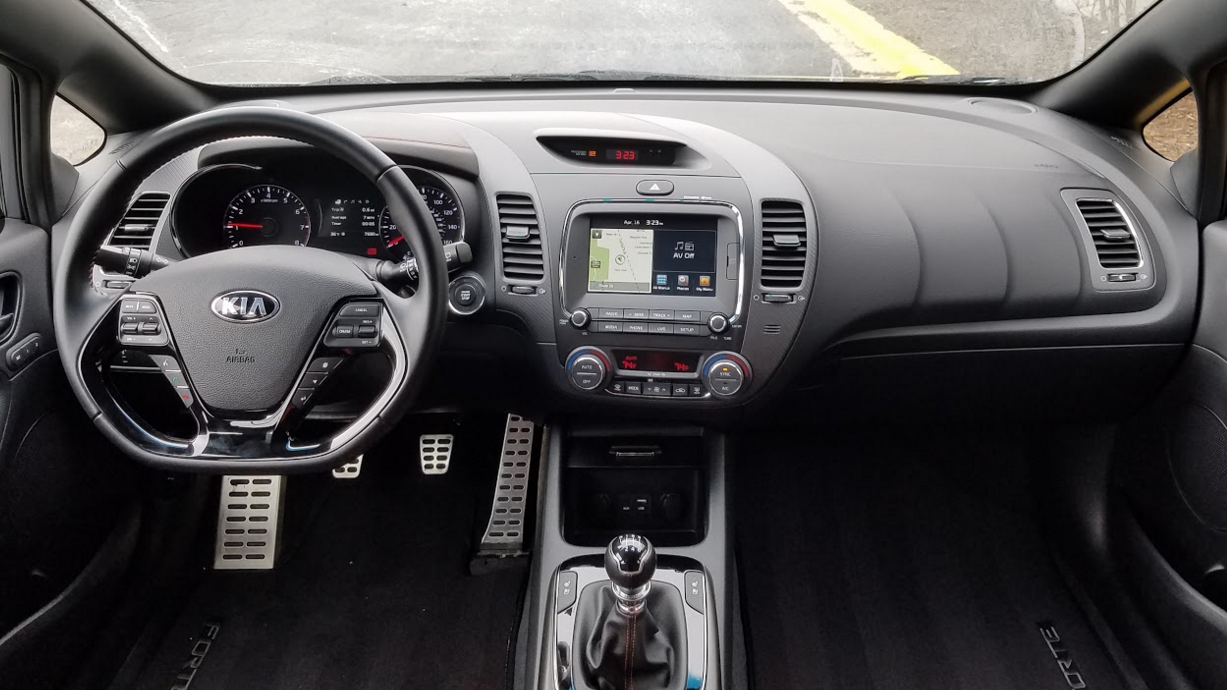 The Forte SX’s dashboard hosts an unusually easy-to-use infotainment system along with a covered forward console bin (dark hole ahead of the shifter) with Aux, USB, and two 12-volt plugs — perfect for holding/charging your cell phone. Also along for the ride are aluminum-look pedals that add to the car’s sporting flair.

As we’ve noticed in other Kias, the company seems to have an usually good grasp on control layouts. The SX’s UVO infotainment system has volume and tuning knobs in addition to eight physical buttons, all mounted within easy reach for exceptional ease of use. Climate controls are likewise easy to reach, though some are repetitive-step pushbuttons that aren’t as easy to adjust as rotary knobs.

There’s a decent amount of cabin storage, highlighted by a large glovebox and a large covered forward-console bin hosting Aux/USB/ and two 12-volt plugs — perfect for stashing your cell phone. There’s also decent room in front, though really tall folks might be short of space. In back, there’s 6-footer headroom and adequate legroom — with the bonus of a nearly flat floor for a squeezed center-seater — though legroom can get tight if the seat ahead is pushed far back, and egress can get tricky through the smallish door opening. 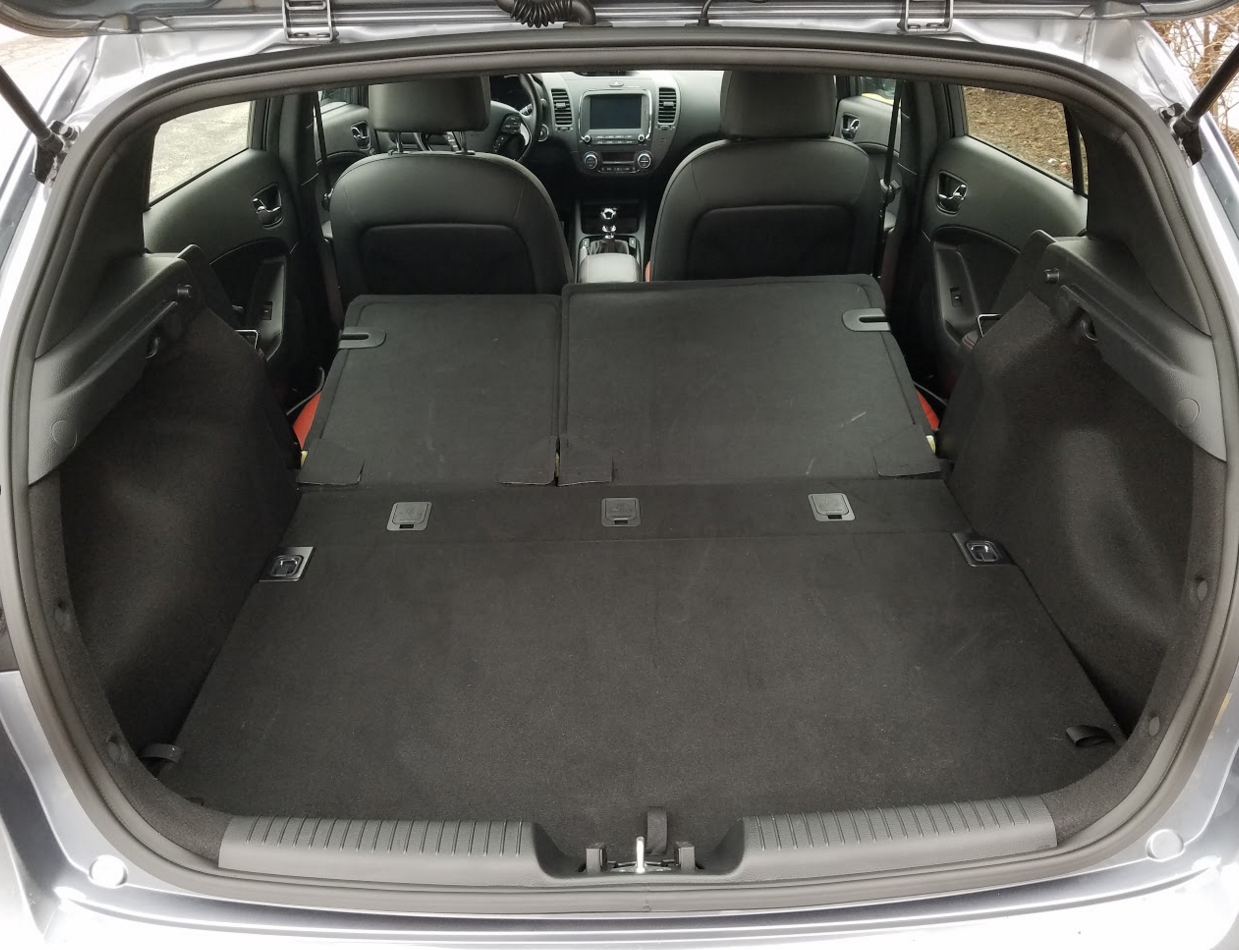 Along with its sporting flavor and luxury accoutrements, the Forte 5 SX adds a decent dose of utility. Folding the rear seat backs results in a flat-floor cargo area, and there’s a lot of hidden storage beneath the floor.

Cargo space is usually a hatchback strong point, and there’s no exception to that here. The area is wide at the rear with bins built into the sidewalls, there’s a large, flat “hidden” storage area under the cargo floor, and when folded down, the rear seat backs lie flush with the floor to make loading long items easier.

With compact cars still holding their own in the face of the compact-crossover surge, hatchback versions of the Chevrolet Cruze, Ford Focus, Honda Civic, Hyundai Elantra, and Mazda 3 continue to sell in reasonably viable volumes. Yet Kia’s sort of fade into the background. That’s too bad. While we’re disappointed that the Forte 5 doesn’t offer a couple of the high-tech safety features commonly found in rivals, there’s very little else to moan about. Particularly with manual transmission, our tester was an odd but enjoyable combination of fun-to-drive attitude and luxury features at a surprisingly palatable price.

Kia’s Forte 5 SX is a great combination of sporty dynamics, hatchback utility, and luxury features, all wrapped in a nice-looking package that has so far flown under most people’s radar.