A hatchback version of the compact 2017 Chevrolet Cruze is set to go on sale later this year at a starting price of just over $22,000.

America’s relationship with the versatile, practical hatchback has been a decidedly on-and-off affair.

During the ‘70s and ‘80s, it was “on.” Virtually every mainstream manufacturer offered one. But they were usually the cheapest cars you could find, and thus garnered a negative image that screamed, “I bought the cheapest car I could find.” Hardly a prestigious statement. As a result, their numbers dwindled during the ‘90s and remained low for the next couple of decades. 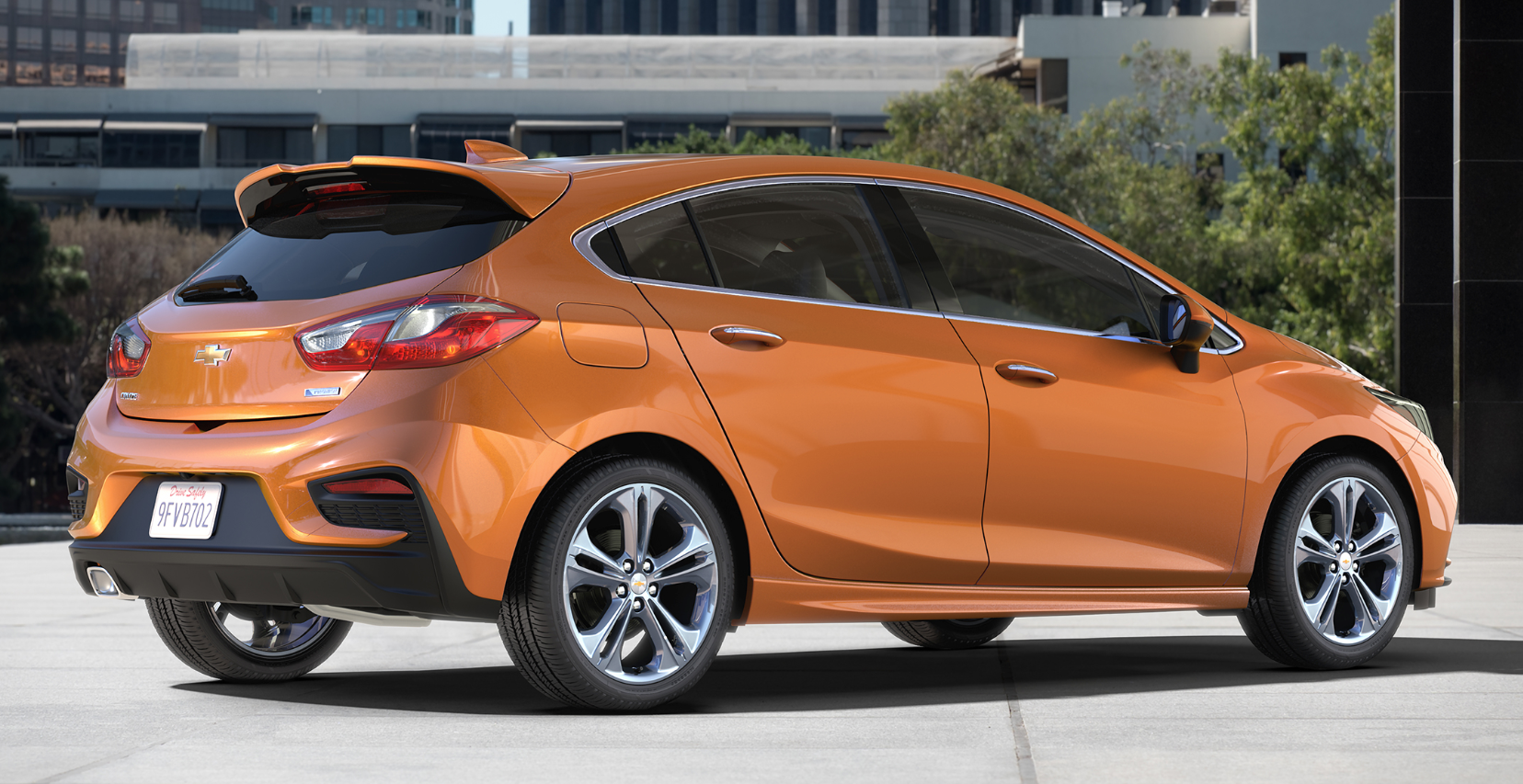 But hatchbacks have seen a resurgence of late. Whether their absence made people forget their “econobox” stigma, their practicality made buyers not care, or that younger folks saw them as something different than what their parents drove is difficult to nail down. But the number of hatchbacks currently offered – which grows with the introduction of Chevrolet Cruze Hatchback (the first hatch in Chevy’s compact corral since the Toyota-sourced Nova of the late ‘80s, though subcompacts like the Sonic were available) and the recent re-introduction of a Honda Civic hatchback – are indications that the relationship is once again “on.”

Compared to the Cruze sedan, which was redesigned last year, the Hatchback is 8.4 inches shorter but has a decidedly larger, “boxier” cargo hold and – perhaps more importantly – a much larger cargo opening. And almost in defiance of its “cheapest car you could buy” heritage, the Hatchback costs more than its sedan counterpart. Whereas the base L sedan starts at $17,850, the least-expensive Hatchback – the LS – starts at $22,190, roughly $2700 more than an LS sedan.

Like the sedan, the Cruze Hatchback comes only with a 153-horsepower 1.4-liter turbocharged four and 6-speed manual transmission, with a 6-speed automatic optional. (However, Chevrolet has announced that a turbodiesel engine will once again be available starting early next year.) EPA estimates for the manual are 28 city/37 highway, with the automatic being 29/38. 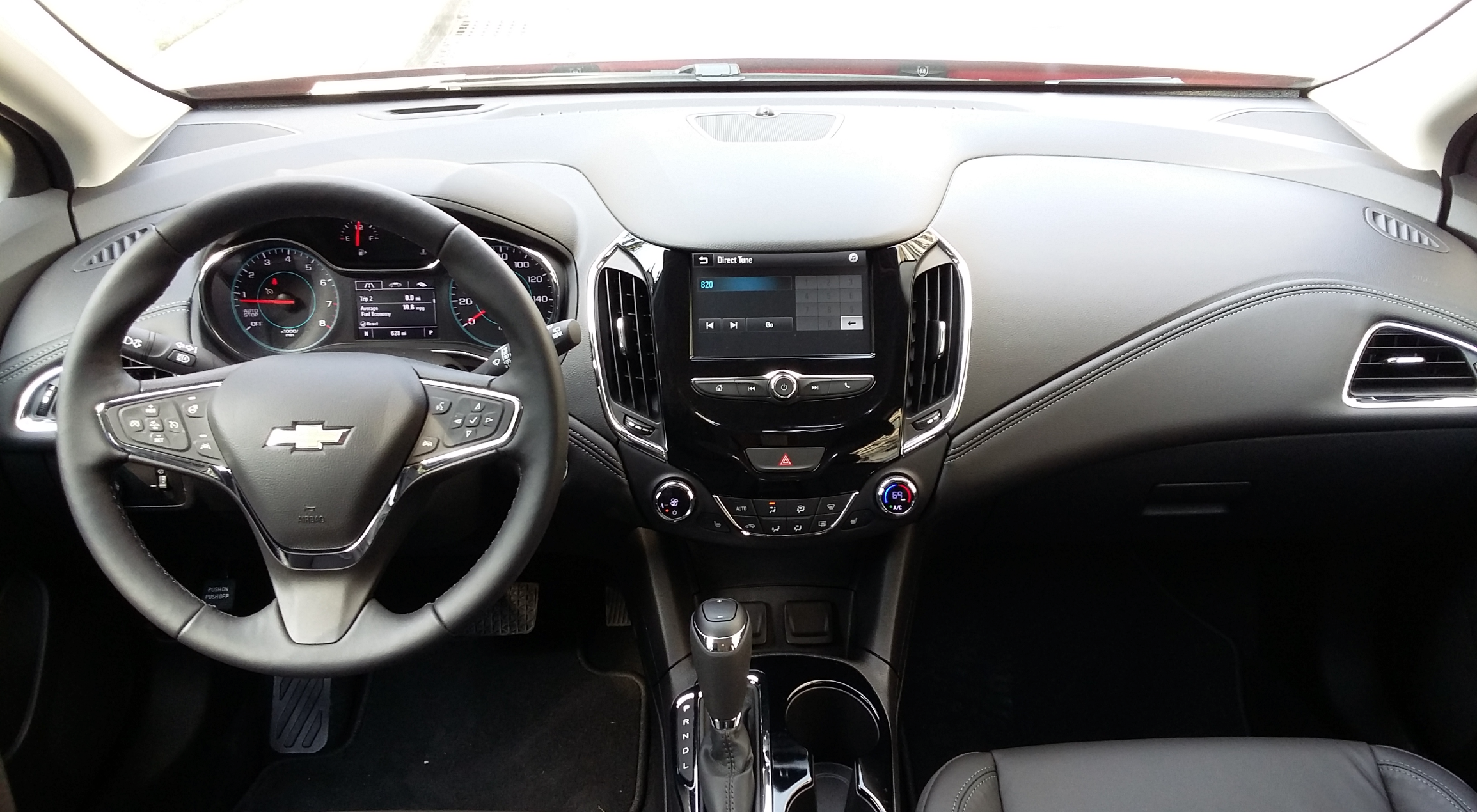 While the interior looks rather subdued in all black, two-tone combinations are offered, as are Apple CarPlay and Android Auto.

Inside, the 2017 Chevrolet Cruze Hatchback is perhaps a bit austere in all black, but two-tone combinations of black/grey and black/brown are offered. While the dash face and armrests are padded, the dashtop and door tops are hard plastic. Controls are easy to reach and fairly easy to use – particularly the climate controls – and there’s a good amount of interior storage. Visibility is good to the front corners, decent to the sides, just OK to the rear corners, but the standard rearview camera helps when backing.

Interior room is impressive for a compact. Front-seaters should have plenty of space, and even 6-footers should find sufficient headroom and legroom in back. A nearly flat floor leaves decent foot space for a middle passenger, and large door openings ease entry and exit. 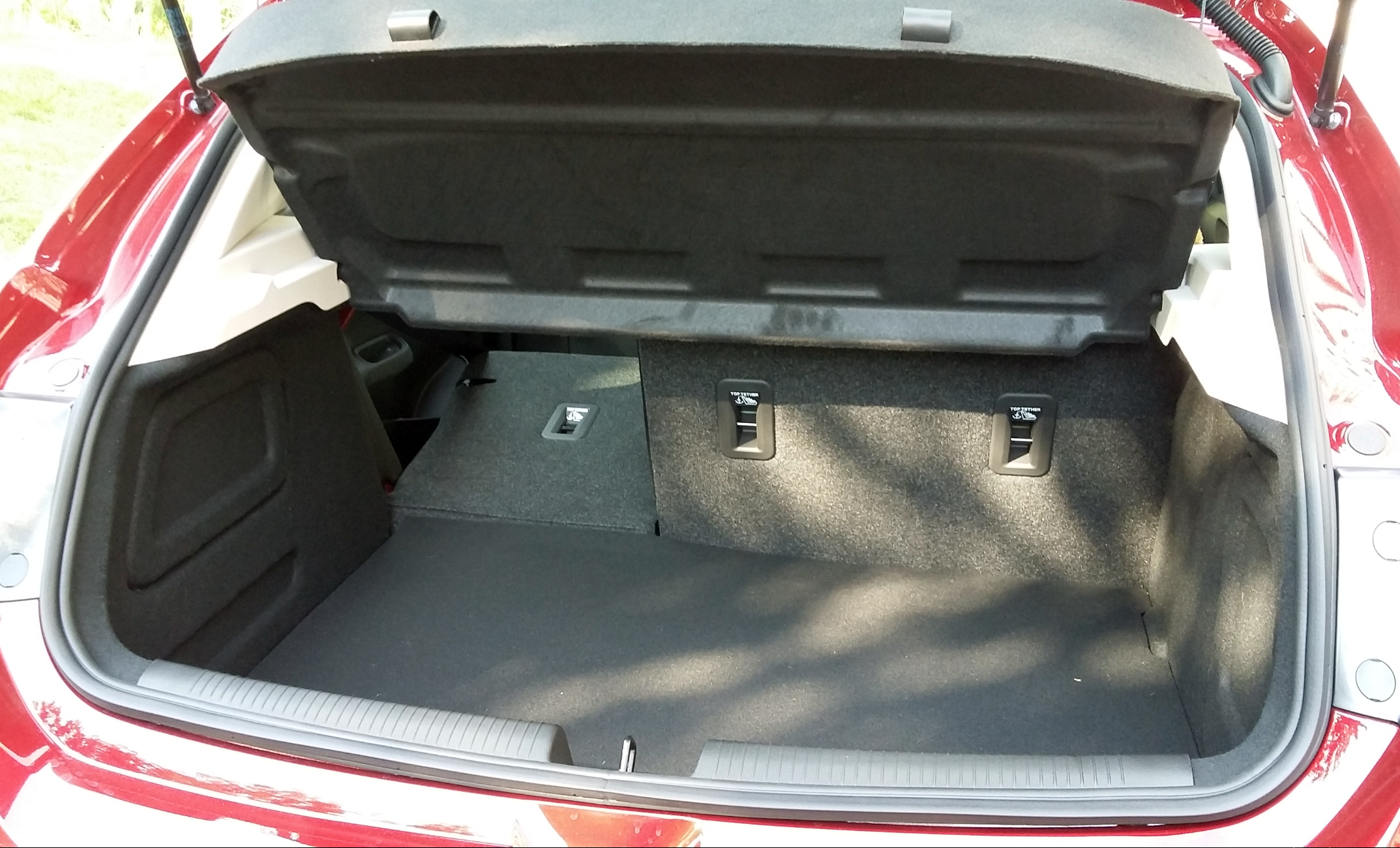 The hatchback opens to a large but narrow cargo hold, though there’s lots of space under the floor, and the rear seat backs fold nearly flat and level to ease loading of long items.

Fold the rear seat backs, and the Cruze awards you with 47.2 cubic feet of space, on par with some subcompact SUVs (including Chevy’s own Trax). Although the cargo area is rather narrow, there’s quite a bit of additional space under the floor. A slight rise to the folded rear seat backs is bridged with a ramp, so loading long items should be a breeze.

The LS we drove seemed to ride a bit more smoothly than its Premier counterpart we also drove (probably due to the former’s 17-inch tires in place of the latter’s 18s), but both were quite composed. And since the preview was held in Detroit – possibly the only city with worse roads than found around our Chicagoland headquarters – we feel quite comfortable with that assessment. Steering and handling were fine if not quite sporty.

The 1.4-liter turbo is exceptionally quiet at idle (so much so that we once forgot to turn it off), but it groans rather loudly above 3500 rpm. As with most small turbos, there’s a bit of lag to throttle response. With the automatic transmission, it’s most noticed in full-throttle takeoffs, which are a bit leisurely until about 20 feet out, when boost arrives. Stab the throttle while underway, and the transmission kicks down fairly quickly for more passing power. But with the manual transmission — which shifts about as sweetly as any we’ve driven — lag is noticed at most lower engine speeds, which is what you’re usually using in around-town driving.

While many folks still like the security afforded by a traditional trunk – and maybe even the look of it – it’s tough to beat a hatchback for versatility. And seeing as the rest of the Cruze is quite well sorted out in either form, this is one hatchback relationship that would certainly be worth pursuing.

Hatchbacks are gaining (once again) in popularity, primarily due to their more versatile cargo capabilities, but also to their more “parkable” length.