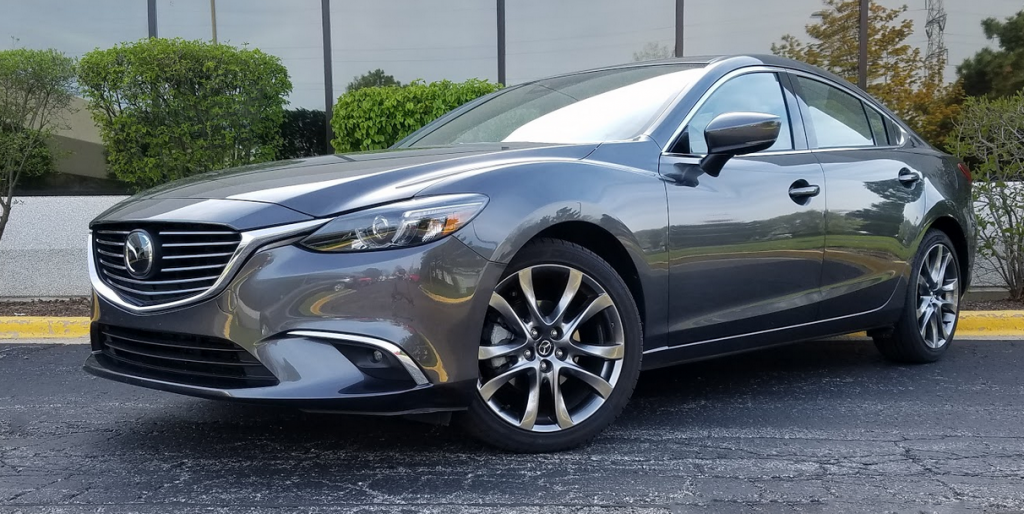 The not so good: Mazda Connect control interface requires familiarization

If the headlong rush to crossover sport-utility vehicles shortchanges consumers in any specific way it will be this one: They’ll miss out on some darned nice cars. One of them is the 2017 Mazda 6 i in Grand Touring trim.

Consumer Guide® has picked the 6 as a “Best Buy” in the midsize class, and a test of 2017 model that’s improved a bit over the ’16 Grand Touring that CG editors liked gives no reason to change that opinion. It is just as nimble, attractive, and yet still practical as before—if not a bit more. 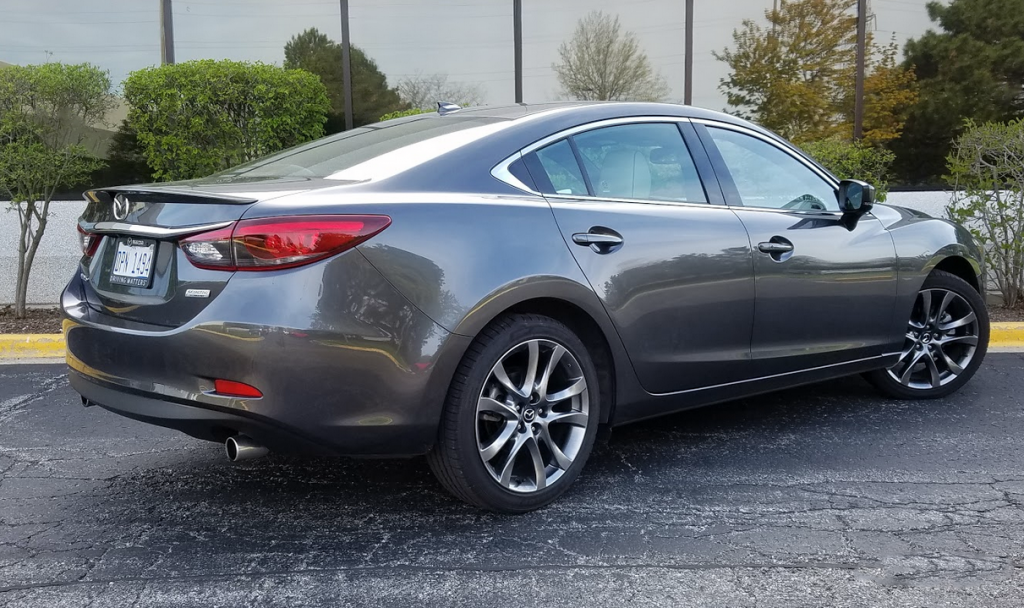 The Mazda 6 is one of the sleekest, sportiest-looking midsize sedans around, and definitely one of the best-handling cars in its class, but its 184-hp 4-cylinder engine–the only powerplant choice available–might not offer acceleration that’s robust enough to satisfy some hotfooted drivers.

Newly standard is G-Vectoring Control that adjusts engine torque in response to steering inputs to improve handling and ride quality. The Grand Touring, which sits atop the 3-model Mazda 6 lineup, gains standard lane-keep assist, traffic-sign recognition, and self-dimming headlights for 2017.

True to the form established when the 6 was freshened inside and out for 2016, the Grand Touring interior has a generous application of soft-touch surfaces. Parchment seat leather and matching vinyl on the door panels and center of the dash contrasted dramatically with surrounding black surfaces in the test car. Driving controls include large speedometer and tachometer dials, a clear vehicle-information display between the gauges, and a head-up readout for speed and other functions that projects on a little tinted window that powers up from the top of the instrument panel. The displays of some head-up systems that register on the windshield glass become nearly invisible to drivers wearing polarized sunglasses; the Mazda unit has no such problem. 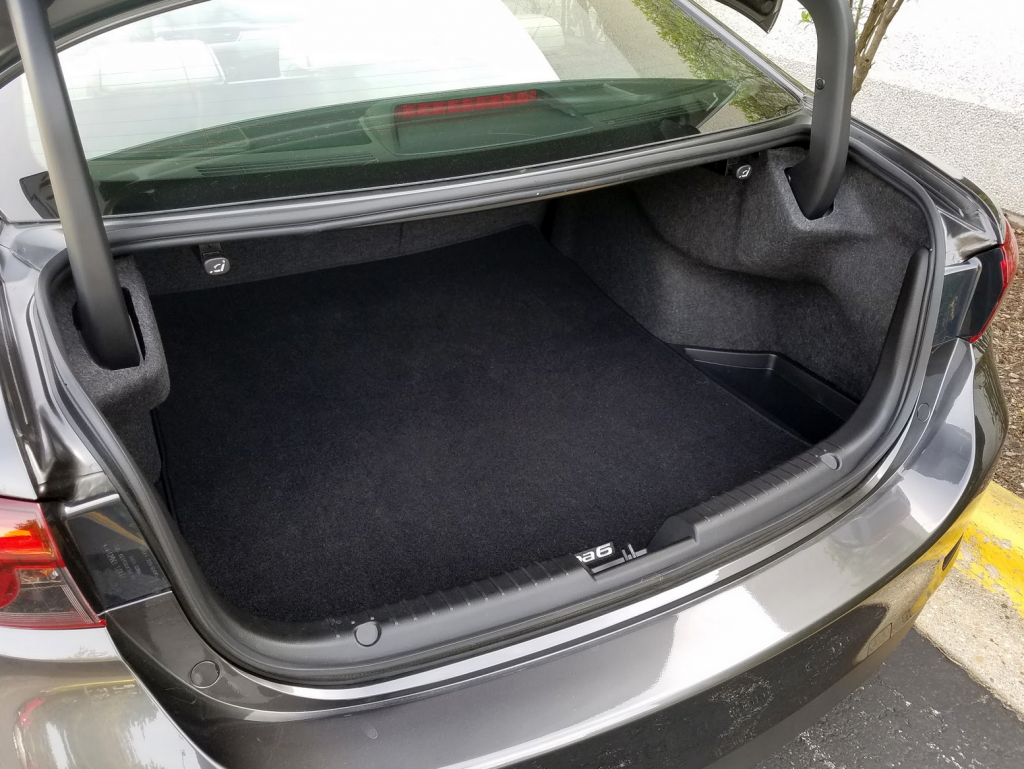 The Mazda Connect infotainment system is monitored on a 7-inch color screen that sits atop the center of the dash. Unfortunately (at least as far as this reviewer is concerned) manipulation of audio, navigation, and other functions is handled through a console controller that requires some attention to operate, and is frustrating in a few of its quirks. Climate controls remain outside the reach of Mazda Connect. They reside in the center of the dash and are simple to use.

Seats provide good support and long-drive comfort. Legroom is pleasing in front and fairly good in back. Two adults is the limit for comfortable seating in the back seat. Headroom is better in front than it is in back, and a sloping roofline that helps give the 6 its sharp looks forces rear occupants to take some care when getting in or out. Interior storage is handled by a glove box, and a small cubby (with media-device inputs) under the center armrest. Front doors have pockets, and two covered cup holders are set in the console. Rear passengers have a bottle-holder in each door and pouches on the backs of the front seats. Twin cup holders and the seat-heater controls reside in the pull-down center armrest.

Trunk space is good for the class. It’s configured well, too, with a long, flat floor and bins for small items at the rear corners. Rear seats split in a 60/40 break—with pull-type seat-back releases in the trunk—and fold nearly flat for extra cargo capacity.

The sole powerteam for the Grand Touring is a 2.5-liter 4-cylinder engine and 6-speed automatic transmission. (Other Mazda 6s have the option of a 6-speed manual.) The engine generates decent power at 184 horsepower and 185 lb-ft of torque, but it’s not up to the level of the V6s and turbocharged fours that some class competitors offer. The 6 seems to hang its hat on fuel economy. With i-ELOOP, the ’17 midsize Mazda is rated by the EPA at 27 mpg in city driving, 35 mpg on the highway, and 30 combined. Having put 208.7 miles on the test car with city-type driving accounting for 64 percent, this driver recorded 29.58 mpg.

Handling exceeds the tame standard of the average midsize family sedan—the 6 is entertaining to drive. Similarly, ride is a little firmer than expected in the class. Some drivers used to cushier chassis tuning may perceive this as stiff or harsh.

The Mazda 6’s sloped rear roofline looks great, but it can make rear-seat entry and exit a bit trickier than in most midsize-sedan rivals. Dark-tinted 19-inch alloy wheels are standard on Grand Touring models.