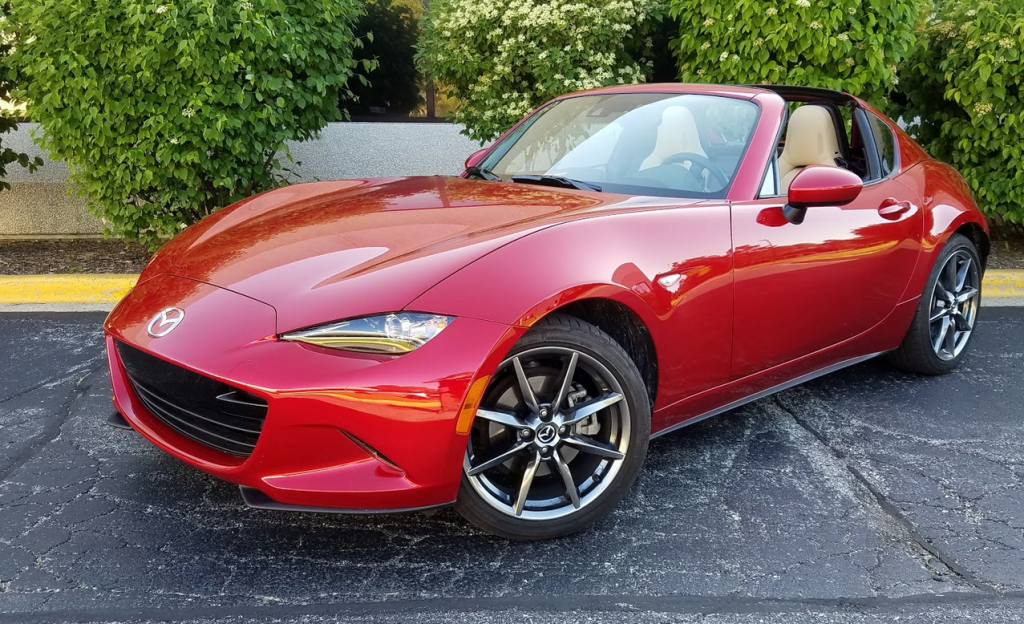 The good: Improved all-weather isolation and quieter highway cruising with top in place

The not so good: Limited space for people or luggage

Heaven knows Mazda has had all kinds of success with the MX-5 Miata in the nearly 30 years that it has been around. Its blend of driving fun and affordability is hard to top.

Unless, maybe, with an actual top.

The fourth-generation Miata roadster just came out as a 2016 model, so there was little that needed to be done there. Thus, it falls to a new body style to create some buzz this year, and that is the RF targa-roof coupe.

Open air or with the retractable top in place, the MX-5 Miata RF looks sportier and more exotic than its price might suggest.

In the grand tradition of the targa style (think Porsche 911), the RF is part closed car and part open car. However, instead of a removable roof panel above the seats, the Mazda’s top section and vertical rear window tuck under the deck beneath the “flying buttress” roof hoop, making it a little like the retractable-hardtop convertible that was part of the last-gen Mazda family. With the top up, the RF has the profile of a ¾-scale exotic gran turismo.

Unlike the roadster, which has three trim levels, the RF comes in just two grades, Club and Grand Touring. Consumer Guide® tested a manual-transmission Grand Touring RF, which is very nearly the top of the whole MX-5 line with a starting price of $32,620—only the Grand Touring RF with a 6-speed automatic transmission has a base price that’s $1205 higher.

Space is limited in the MX-5 Miata RF, for passengers and for cargo. For maximum comfort, occupants should be on the thinner, shorter side. As for luggage, there’s just 4.5 cubic feet of trunk space in which to stow your gear.

Devout automotive sun worshipers will probably settle for nothing less than a fully disappearing convertible top with its wind-in-the-hair ambience and unfettered visibility. The RF can provide much of that open-air sensation with its top panel stowed but maintain a sleek coupe look when fully enclosed. Pressing and holding a lever starts the whole process. The header lock releases automatically; the roof hoop raises itself; the top panel and rear window lift, then jackknife into a bundle that drops into a well; and the roof hoop settles back down. An alert on the instrument cluster reports when the process has run its course, which it does about as quickly as any power convertible top. Practically the only thing that could be faster for dropping a top is the one-handed backward reach that does the job in the Miata roadster.

Certainly, there are some differences between the two top styles. When the roadster’s soft top is down, Miata drivers are lord or lady of all they survey, but the RF pilot will always contend with over-the-shoulder vision obstructions, particularly to the left. The straight-back view in the RF isn’t much more confined than in the raised convertible top. The targa reduces wind buffeting a bit, and a clear wind blocker rises behind the seats. Whizzing down the Interstate on a sunny drive from Chicago to Detroit, the only thing that made this reviewer want to stop to close the top after a few hours was a desire to avoid becoming extra crispy. On the other hand, when the RF is fully buttoned up, the interior traps the drone of road and engine noises, and this tester heard some wind whistle on the highway. Plus, headroom isn’t especially generous.

The extra structure of the RF modifies its specifications relative to the roadster. Mazda lists the curb weight of the manual-shift Grand Touring targa at 2445 pounds, which is 113 pounds more than a comparable roadster weighs. However, the stickshift GT coupe has an ideal 50/50 front/rear weight balance while the companion ragtop is slightly heavier in front than in back. The 155-horsepower 2.0-liter 4-cylinder engine moves either body style with enough power for quick getaways and with sufficient torque to keep from having to downshift the cooperative 6-speed gearbox incessantly in order to stay in the power band. The coupe also steers, brakes, and rides about as well as the roadster, which is pretty good on all accounts. 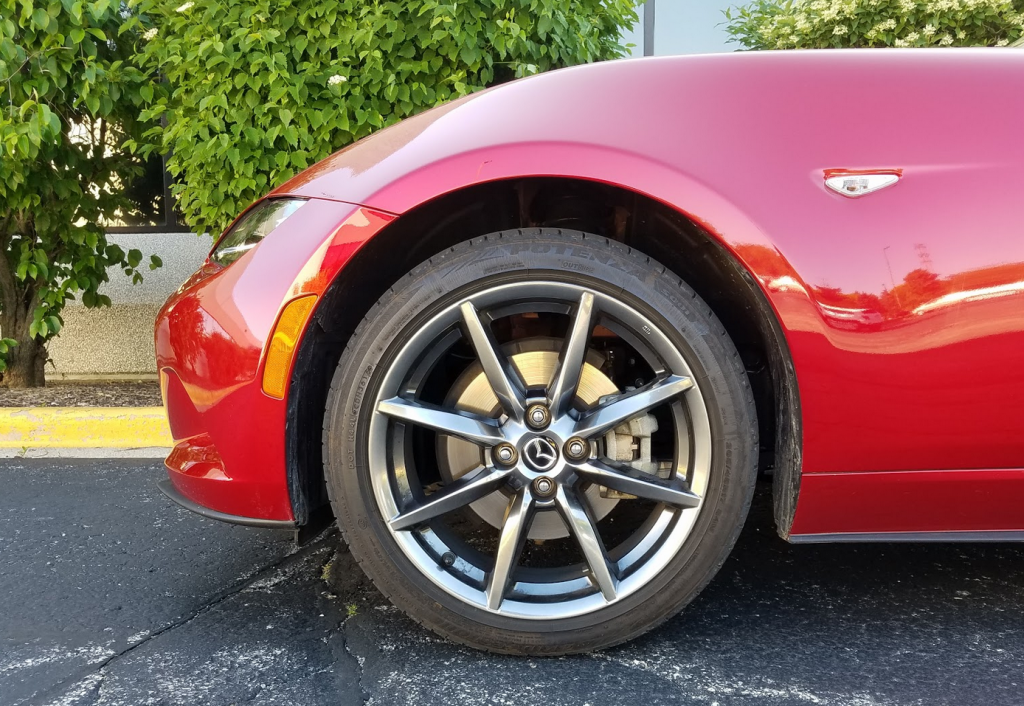 The EPA estimates the manual-shift RF will get 26 mpg in city driving, 33 on the highway, and 29 combined, but this driver saw much more from the test car. After a full week and 888.4 miles in the RF, his aggregate average from three fill-ups was 34.76 mpg, this with 18 percent of test miles in city-type operation. The best performance in that stretch was 38.71 mpg from a stint that was just four percent city driving.

RF equipment and amenities are virtually the same as in comparable roadsters. That means minimal interior storage space and a small trunk with a hatchlike lid. At least the demands the coupe’s top-storage protocol place on trunk capacity are the same as in the convertible. The Grand Touring comes with heated leather seats and the somewhat-complicated (and distracting) dial-activated Commander Control for the Mazda Connect infotainment system. Bluetooth connectivity, satellite radio, navigation, 9-speaker Bose audio system, automatic air conditioning, 17-inch alloy wheels, bright-tipped twin exhaust outlets, heated side mirrors, blind-spot monitoring, rear cross-traffic alert, and lane-departure warning are other notable standards. (An egregiously loud humming noise marks lane-departure warnings, and an instrument display shows the side on which the “incursion” is taking place.)

With premium paint, the upgraded keyless entry system that’s standard on automatic-trans cars, and delivery, CG‘s test MX-5 RF came to $33,885. The roadster is still the way to go for fun on a budget; a Grand Touring convertible starts at $2555 less than its RF counterpart. However, if the coupe has added cost, at least it hasn’t subtracted anything from the Miata experience.

The RF weighs about 100 pounds more than a soft-top MX-5 Miata. Based our testing, the added weight does little to dull the car’s sporty character.