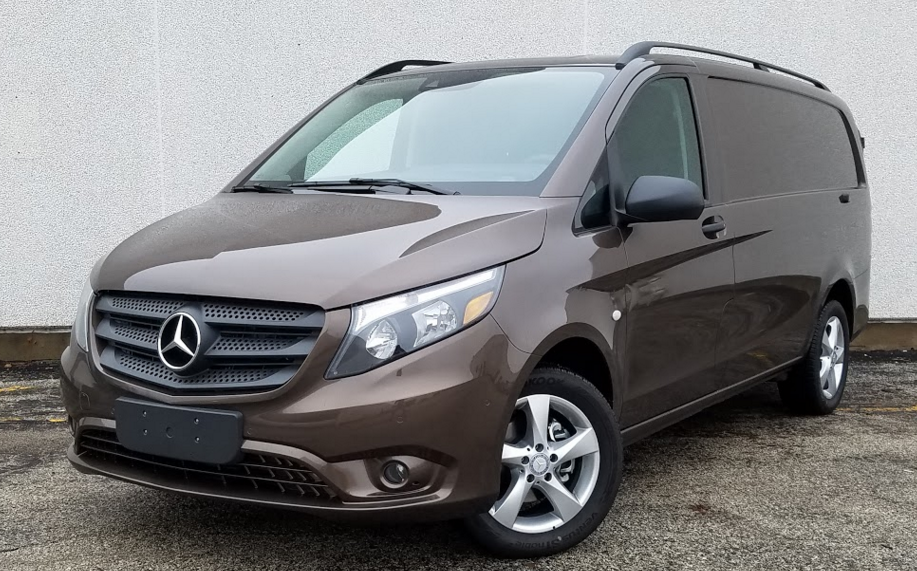 The not so good: Control layout, visibility

Midsize cargo vans have come and gone, but right now, the new Mercedes-Benz Metris is the only midsize game in town. That’s really rather surprising, as the Metris boasts the “garageability” of a compact van while having significantly greater cargo volume, payload capacity, and towing capacity. 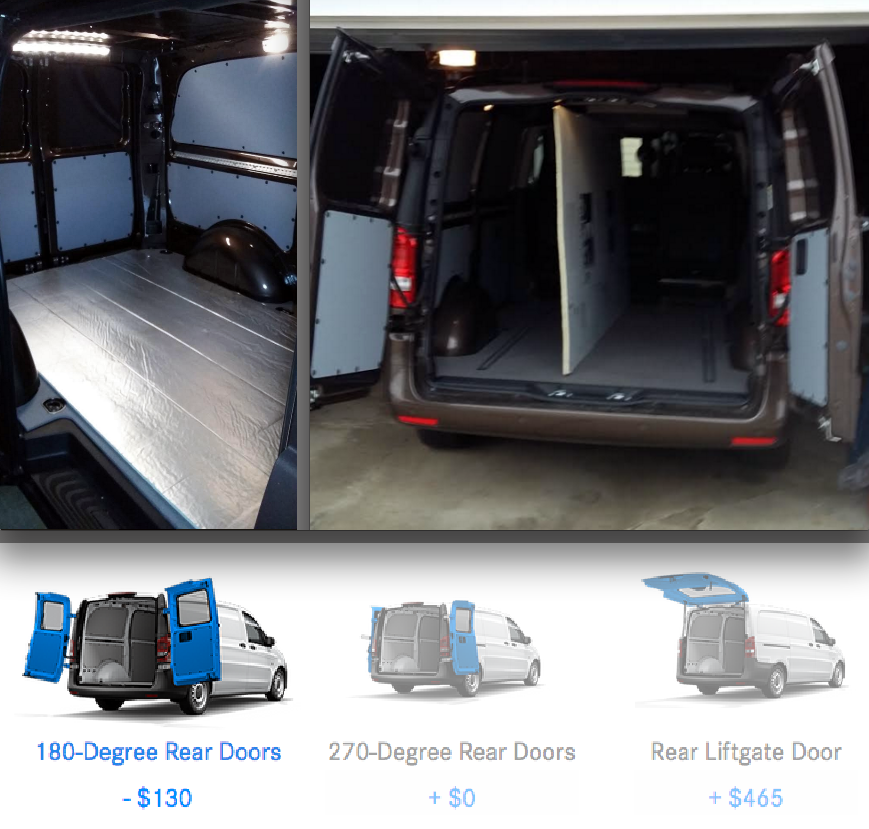 The Metris can enclose 4×8 sheets either flat on the floor or vertically, offers three different rear cargo-door configurations, and will fit in a standard garage — an unusual if not unique combination of qualities for a cargo van.

The rear-wheel-drive Metris has only a right-side sliding cargo door, but offers a choice of three rear cargo-door choices: side-by-side doors that open 180 degrees or 270 degrees, and a conventional liftgate. The cargo area is long, wide, and tall enough to fully enclose 4×8 sheets, either flat on the floor or standing up.

Metris is offered in two cargo versions: Worker and Base. (There are also two passenger versions that can seat up to eight.) The Worker version is sort of a “stripper” model that offers limited options and comes only in white. The Base is available with a much larger choice of options and colors. The cargo model we tested was a Base version that started at $29,945 including destination, and — loaded with options — bottom-lined at about $38,347. (We say “about,” because it had no window sticker, so we had to calculate its options from the Mercedes-Benz website.)

One of the great strengths of the Metris is its powertrain. The 208-horsepower 2.0-liter turbocharged 4-cylinder engine provides spunky performance along with decent fuel economy. Our Metris was equipped with the optional start/stop system — which is intended to save fuel in city driving — but it sometimes shuddered a bit on restart. Otherwise, the whole driving experience was impressively carlike for what amounts to a work van. We timed our test Metris at 8.4 seconds 0-60 and averaged 24.9 mpg in 66 percent highway driving. By contrast, the compact Ram ProMaster City we tested last fall ran 0-60 in 9.6 seconds and returned 25.1 mpg in 80 percent highway driving.

Speaking of “contrasts,” as there are no other midsize vans in competition with the Metris and potential buyers are likely to also be browsing compacts, we’ll continue with some comparisons to the Ram ProMaster City:

Note that while the base price of the ProMaster City is only $2375 less than that of the Metris Worker, the base ProMaster City is often sold with factory discounts and is available with numerous options and color choices not offered on the Metris Worker. So if you jump to the Base Metris to get more features, the starting difference is about $5330.

Some elements — good and bad — that stuck out about the Metris: 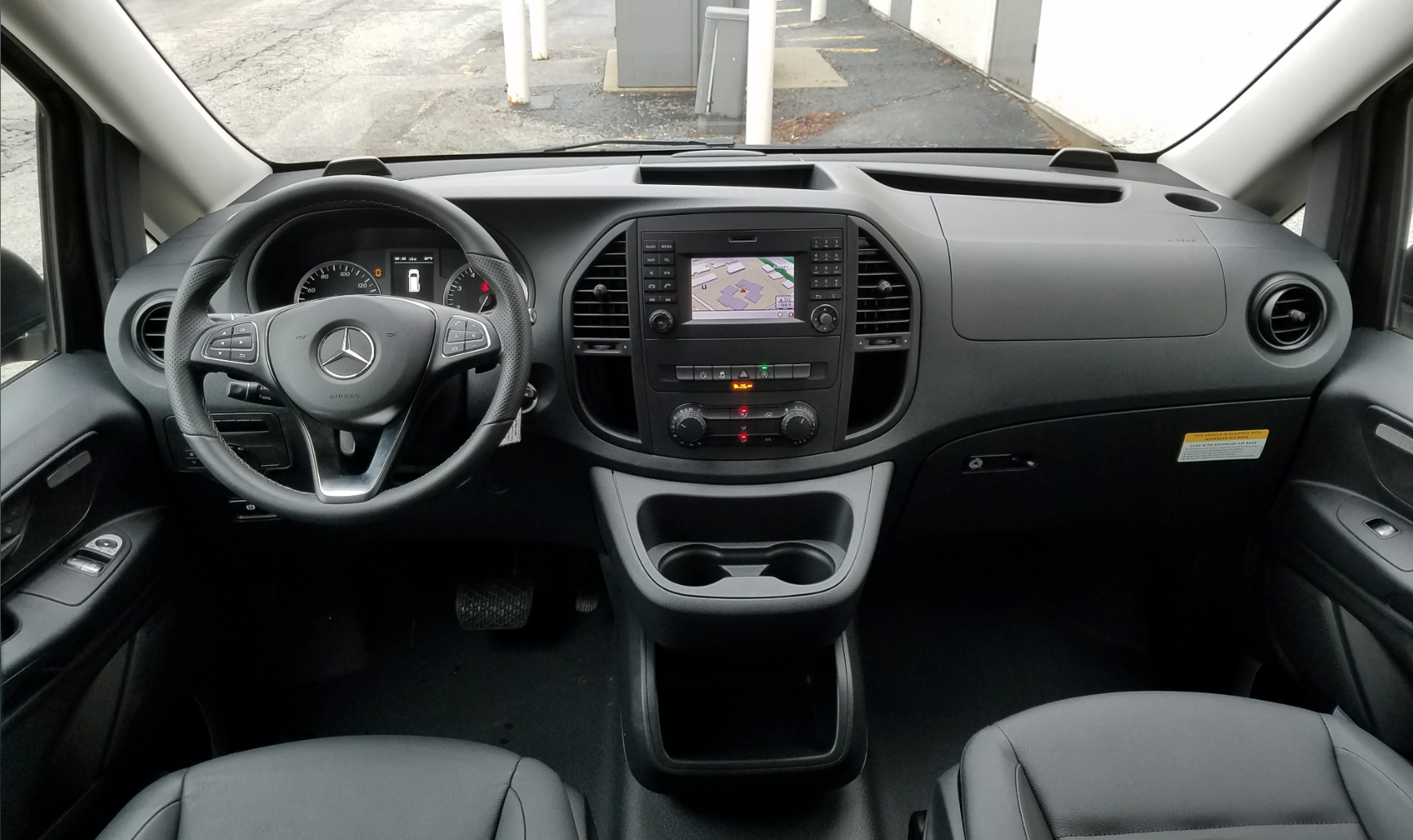 Mostly hard-plastic interior materials are more utilitarian than “Mercedes-Benz,” but there are lots of storage cubbies (including three dashtop bins) along with USB/Aux/12-volt plugs.

Things that could cross you up: What looks like a wiper stalk to the right of the steering column is actually the gearshift lever, and the cruise-control stalk is hidden behind the left steering-wheel spoke.

Though not without its faults, my overall impression of the Metris was that it was surprisingly comfortable and pleasant to drive (possibly due to some of the options fitted), it had extraordinary cargo-carrying versatility, and it fit in my garage. Those who feel compact cargo vans are too small and large ones too big may find the midsize Metris to be juuuuuust right. 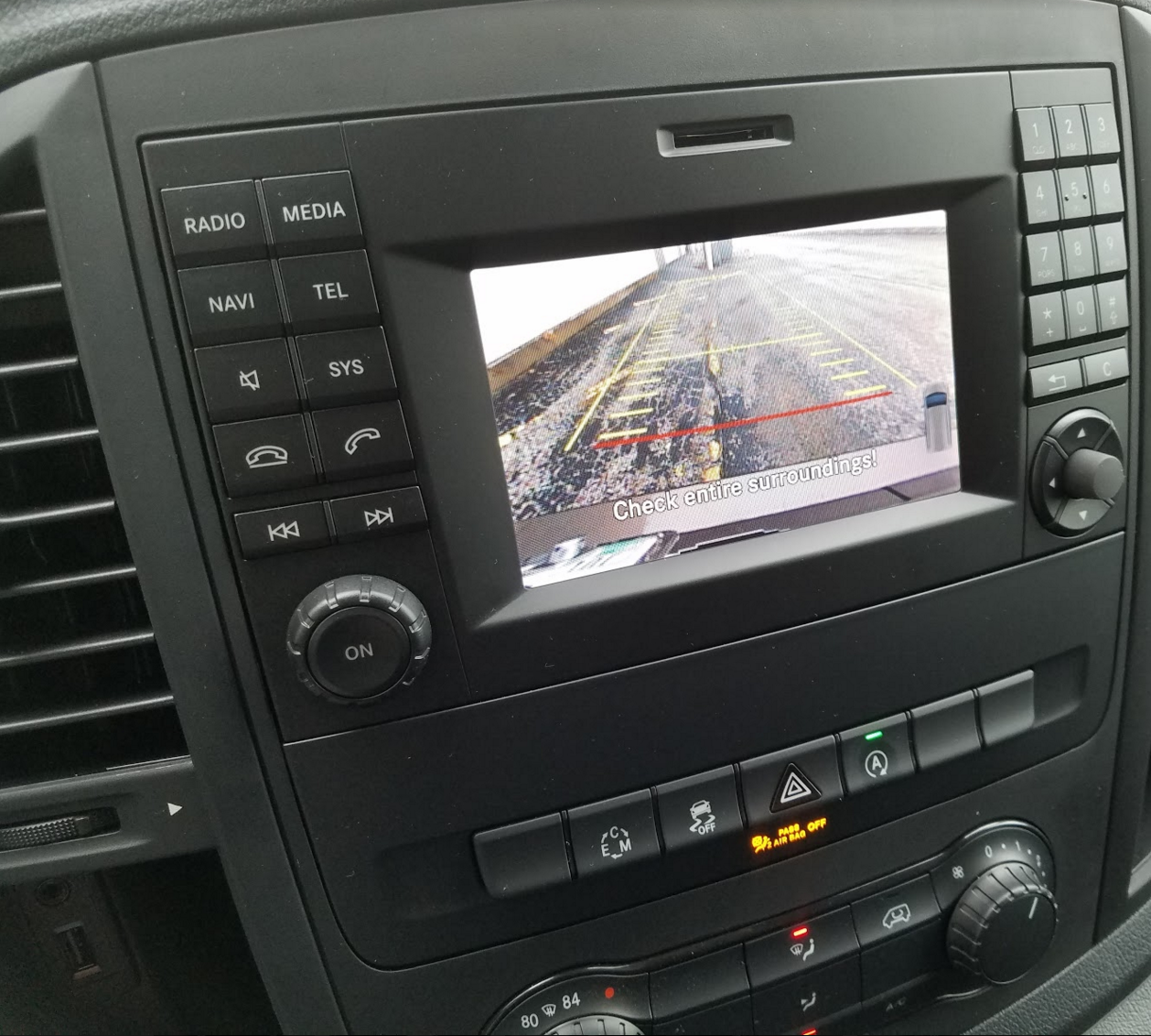 The audio system takes some acclimation and the station-select buttons to the far right are a bit of a reach for the driver, but climate controls are easy to use. The rearview camera is very useful, but it only shows a 140-degree view on a rather small screen.

Driving the windowless Metris cargo van for a day was a trip down memory lane. In the summer of 1978, before my final year of college, I had a job as a courier for a Northwest Indiana bank, shuttling documents and supplies between five area branches twice a day in the company’s ’75 Dodge Tradesman. It, too, had no side or rear windows, just big external mirrors—and my constant vigilance. How I would have loved to have the Metris’s rearview camera and blind-spot alerts on the Tradesman, although there’s still something to be said for that vigilance thing no matter how much tech a truck has.

In some ways, the driving environments of these two vehicles are quite similar. Materials and “amenities” are austere, designed for hard wear. (The Metris’s air conditioning, FM radio, flip-up seat armrest, and cup holders were just pipedreams in the Dodge.) Without a load, the interior is a hollow echo chamber of body vibrations and suspension noises. Ride comfort are two words that really don’t go together, either.

Like the man says, though, nostalgia ain’t what it used to be. The Metris gets up and goes with a 2.0-liter turbocharged 4-cylinder engine that pulls strongly right away while still delivering 20-plus-mpg fuel economy. The cargo area is almost high enough to stand up in while the load floor is low enough for easy loading and access. A convenient (and wide) sliding door eases side loading, and a generous supply of tiedown rings in the floor is available to secure cargo. Driving position and instrument placement are a little more carlike, and handling and maneuverability don’t add more work to whatever job you’re tackling with the Mercedes-Benz Metris.

The Metris is sized between current compact cargo vans and traditional large ones, which may make it the perfect size for buyers who want maximum space in a van they can still park in their garage.