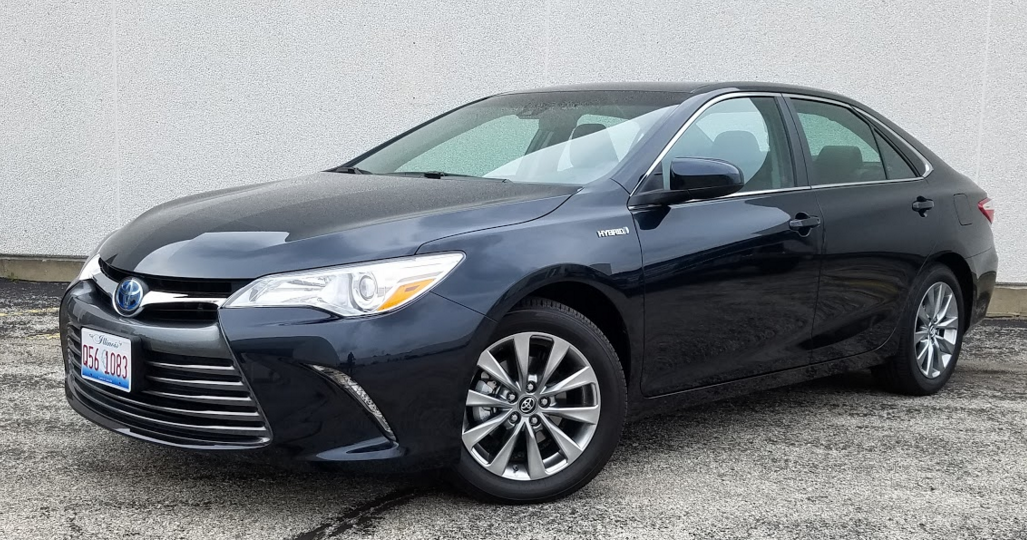 The not so good: Limited trunk space and very small pass-through

It may sound futuristic — a midsize sedan getting 40 mpg in mostly city driving — but the Toyota Camry Hybrid is here now. 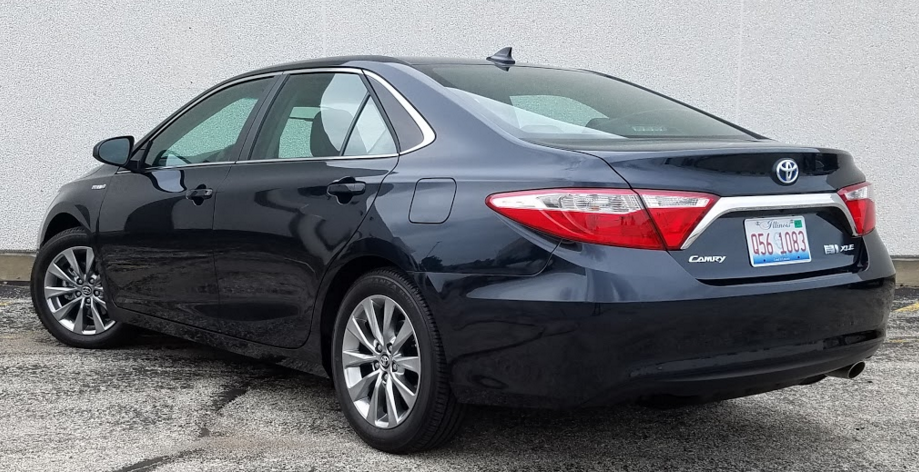 It returned an impressive 39.3 mpg in mostly city driving — right in line with the EPA estimates — but you’ll initially pay nearly $4000 more to get this Hybrid version of the Toyota Camry over its 4-cylinder gas counterpart. However, the Hybrid is quicker and should require less in the way of (very expensive) brake maintenance.

That kind of fuel economy doesn’t come cheap, however. In the trim levels it’s offered (base LE, SE, and XLE), the Hybrid costs nearly $4000 more than its gas-powered counterpart, which is rated at 24 city/33 highway vs. 40/37 for our test XLE Hybrid. As is the case with most hybrids, the big gain comes in city driving. Even if that’s mostly what you do, it would take the Hybrid roughly 95,000 miles on $2.50/gallon gas to pay back its initial hit, though some may also be returned in resale value.

But that’s not the Hybrid’s only benefit. First, the combination of its 2.5-liter 4-cylinder engine and electric motor is rated at 200 horsepower, whereas the 2.5 alone in the gas model is rated at 178; seemingly, not a big difference. However, Toyota claims the Hybrid accelerates from 0-60 mph in 7.6 seconds — quick for a midsize sedan — “placing its performance between the four-cylinder and V6 models.” Indeed, the Hybrid gets a strong jump off the line when you nail the gas, in large part due to the extra “boost” of the electric motor, which — unlike a gas engine — produces its maximum power as soon as it starts to spin. The Hybrid is also very responsive when you put your foot down while underway.

That same electric motor also helps with braking. When you lift off the gas and apply the brakes lightly, it’s the electric motor that slows the car down, not the physical brakes. This is because the electric motor is turned into a generator when you lift off the gas (an electric motor and a generator being the same mechanically), which helps recharge the Hybrid battery. Since it takes power to turn the generator — and that “power” is the car’s momentum — the car slows down. In fact, it isn’t until you either hit the brakes relatively hard or the car is nearly at a stop that the actual brakes come into play. As a result, the brakes last a lot longer. The combination of better fuel economy and lower brake-repair costs is why Hybrids are so popular with taxi fleets.

While you may hear some differences in engine note with a hybrid (for instant, the engine is usually off when the car is stopped, and tends to run at a constant speed even when the car is accelerating), there’s little difference in actual “feel.”

The Hybrid’s battery sits at the back of the trunk, where it not only takes up some space, but also leaves but a small pass-through opening into the rear seat area.

But there’s also a downside to the Hybrid. The aforementioned battery stands upright at the back of the trunk, which not only takes up some cargo space, but also limits the pass-through to just a shoe-box-sized opening about 6 inches above floor level. There’s still a decent amount of space there, just not as much as in the gas version. The trunklid hinges dip into the load area a bit, but they’re covered to prevent damage to luggage, and there’s some cargo space under the floor.

In most other ways, the Hybrid is like its gas-powered sibling — and that’s a pretty good thing to be. 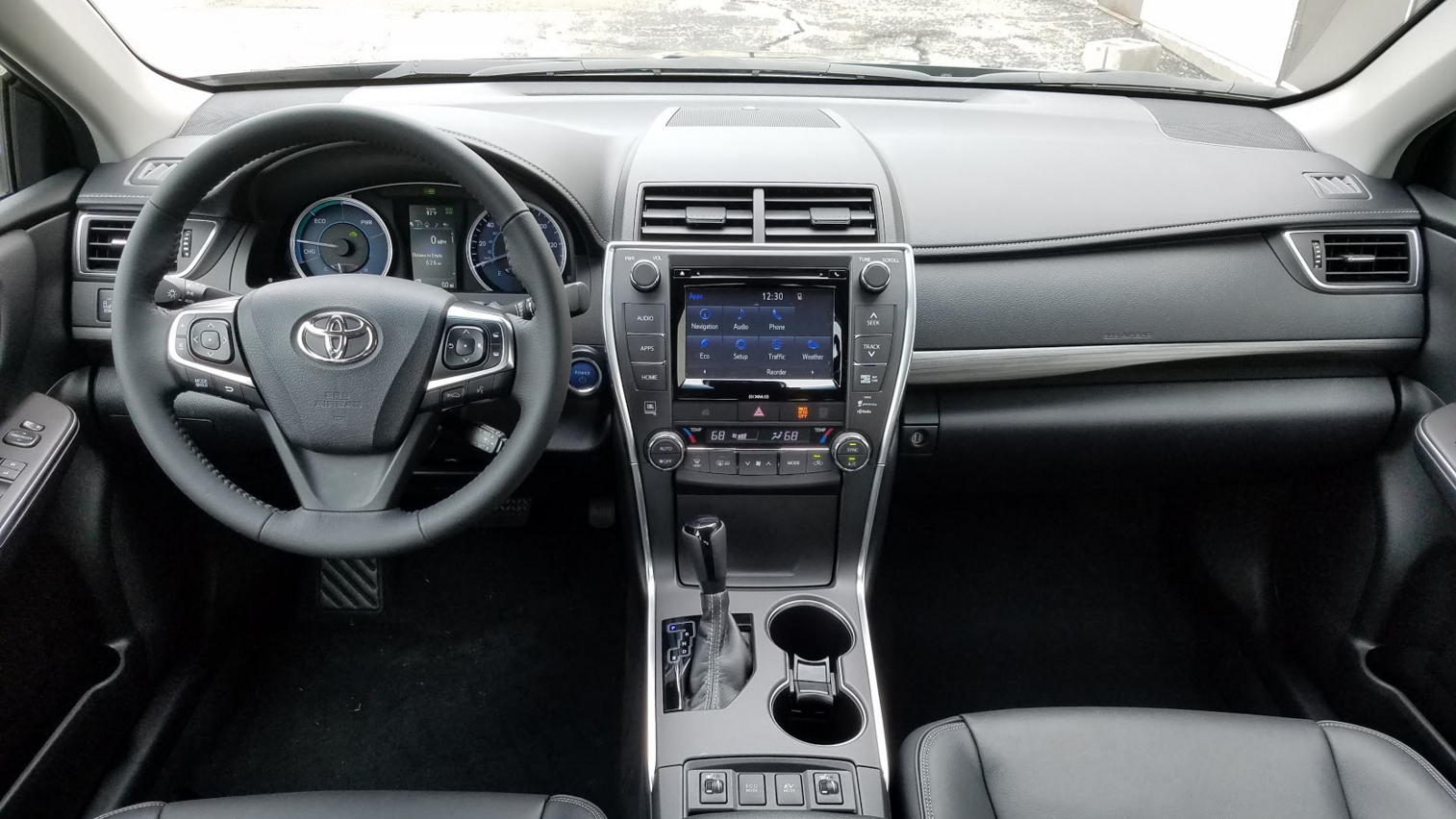 Camry’s interior is nothing fancy, but it’s well laid out, with convenient controls and some handy storage spaces. There’s plenty of passenger space, particularly for rear-seaters.

There’s good headroom and legroom front and rear, and my 5’9 frame had ample legroom in back even with the seat ahead moved all the way rearward. So, great interior space for a midsize car. Interior storage is also quite good, highlighted by a covered forward console bin with 12-volt/Aux/USB plugs (great place to hide stuff that needs to be plugged in) and a small but handy left-side lower dash bin. Slightly less impressive were the materials: padding on the dash and doortops is thin — though thicker on the armrests — and the black expanses are set off only by matte black plastic and silvery woodgrain trim.

On the plus side, visibility is very good, and the control layout generally so. The audio system includes volume and tuning knobs along with a few other buttons, with those relegated to the 7-inch touchscreen being fairly easy to decipher and use. Climate controls include a rotary temperature knob but somewhat tedious, repetitive-step pushbuttons for mode and fan speed; at least they’re easy to reach.

Over Chicago’s bumpy thoroughfares, the Camry Hybrid rode quite well overall, though there were occasions when bumps produced more of a reaction than might be expected of a “sedate” sedan. And aside from the aforementioned constant-speed engine note under acceleration, the Camry Hybrid drives and feels about like any other Camry — which is to say, quiet and refined.

If the measurement is simply in raw dollars, it might be difficult to justify the extra cost of a Camry Hybrid over a conventional gas model, at least in the near term. But there’s always the “green” payback, and who knows? If gas prices rise (and remember, we’re talking over the car’s expected 20+-year lifespan), it may turn out to be a wise investment after all.

Toyota Camry remains the best-selling car in the U.S., thanks not only to its sterling reputation, but also to the fact that it has so few faults. The Hybrid version takes that one better with exceptional fuel economy for a midsize sedan, which helps take some of the sting out of its higher price.