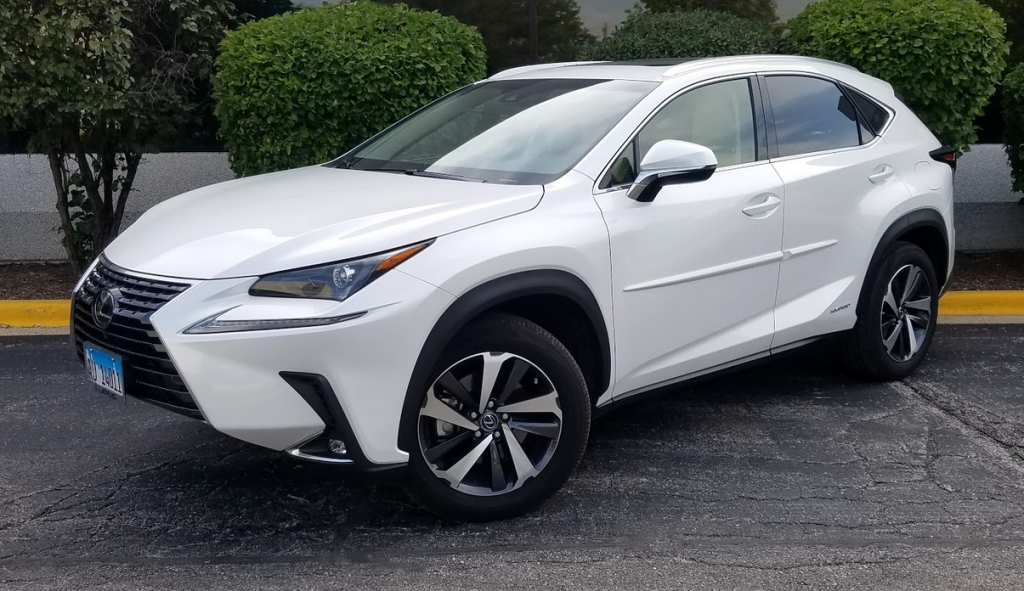 The not so good: Touchpad infotainment interface can be distracting

Lexus dived into the compact sport-utility vehicle at an opportune time when it brought out the NX for 2015. Smaller crossovers were on the rise, and Lexus certainly made a nice one with the choices of front- or all-wheel drive and gas or gas/electric-hybrid powerplants. Since then, the NX has been incrementally improved—for 2018 there is revised styling and the extension of the Lexus Safety System + technology suite as standard equipment for all models—but it hasn’t deviated much from the original form. 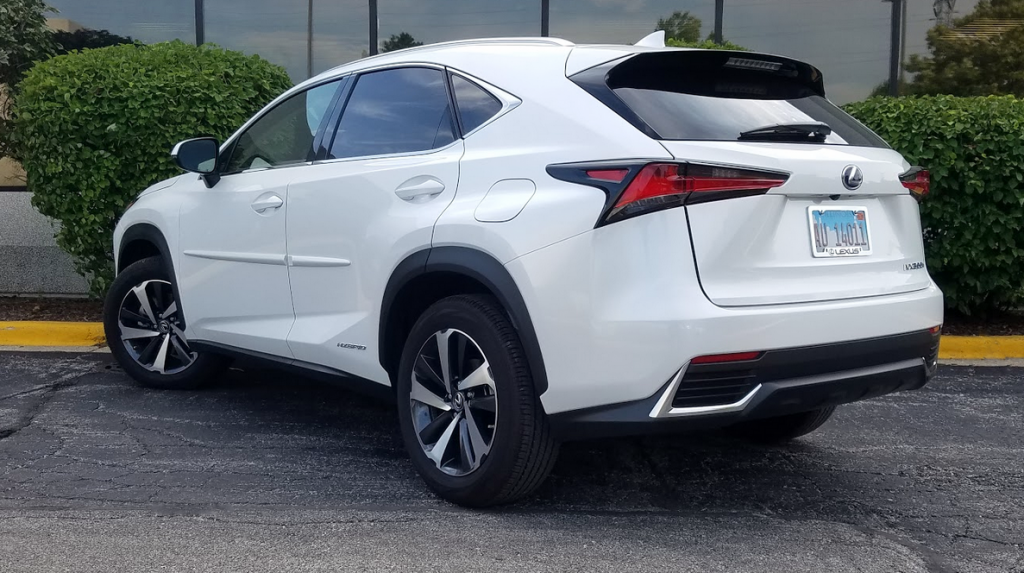 Though its aggressive styling is a bit too ostentatious for some shoppers, the NX offers a nice ride/handling balance.

Given that, it was nice to renew acquaintances with the 300h hybrid version, especially one that blended its commendable fuel economy with ample luxury for a price safely below $50,000.

To be sure, the ’18 NX 300h that Consumer Guide tested was no “stripper.” Among its $7838 worth of options were the $1800 Navigation Package (also including a 10.3-inch display screen and uplevel 10-speaker audio system) and the $4705 Luxury Package (with 18-inch alloy wheels; leather upholstery; wood interior trim; heated and ventilated front seats; heated leather-wrapped steering wheel; power liftgate; rain-sensing windshield wipers; premium LED daytime running lights; power moonroof; memory-function driver’s seat, power mirrors, and tilt/telescoping steering column; blind-spot monitor; and rear cross-traffic alert). It all made for cushy and convenient vehicle, yet the full list price with delivery came to $47,168.

The NX’s interior boasts convincingly upscale materials and, for the most part, agreeable ergonomics. The rear seat is spacious enough to accommodate average-sized adults, especially when the seat backs are reclined to free up headroom.

One other thing the 300h brings to the swanky party is downright good gas mileage for an SUV. The brunt of the driving load is born by a 2.5-liter 4-cylinder engine that the EPA rates at 33 mpg in the city, 30 mpg in highway driving, and 31 combined. This reviewer saw 33.9 mpg following a trip of 220.7 miles with 50 percent city-type operation—about as close to “combined” as it gets—even without dipping into the “Eco” driving mode that manipulates throttle response, engine output, and climate settings to optimize economy. The fuel-saving arsenal also includes an “EV” mode that permits driving short distances at speeds up to 20 mph solely on battery power. 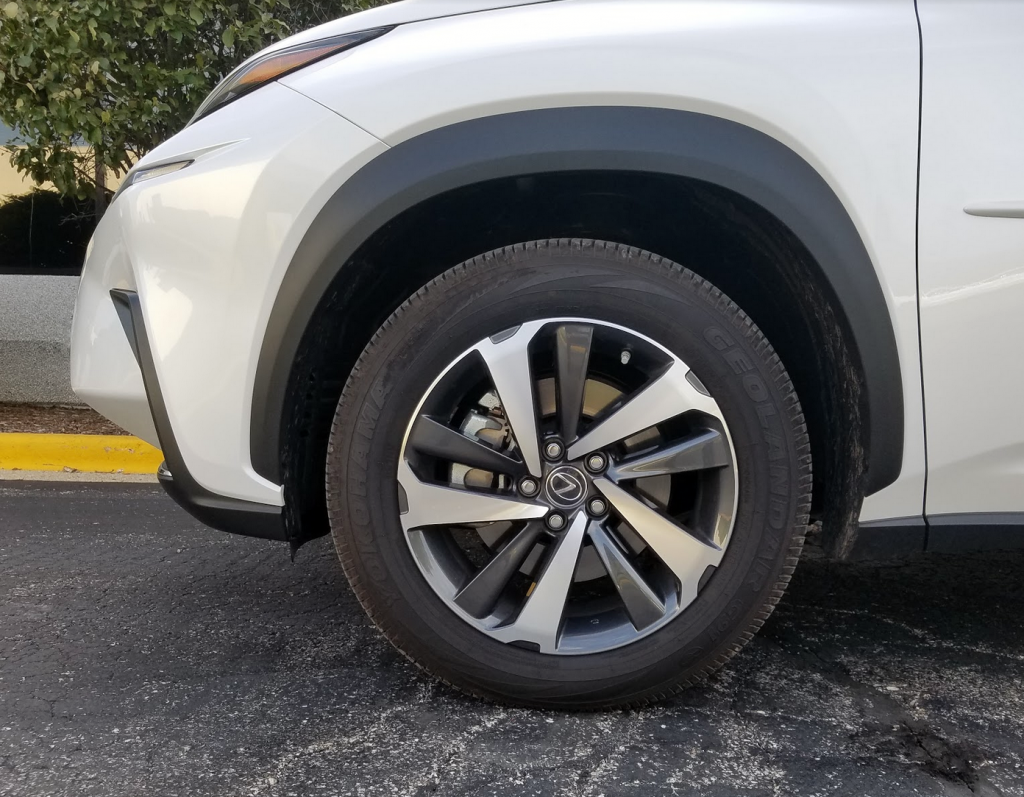 The hybrid powertrain delivers confident merging and highway-cruising power, though off-the-line jump is a bit muted. In addition to Eco, other available driving modes are “Normal” and “Sport,” the latter of which coaxes a modicum of quicker response from the accelerator. Transitions between electric and gas-engine operation are quite seamless. The NX is a pleasingly nimble handler, and derives a composed ride from its tight unitized body structure and suspension of MacPherson struts in front, double wishbones with trailing arms in the rear, and 4-corner coil springs. If there’s any real soft spot in the NX 300h’s driving dynamics, it’s the slowly building brake force that often plagues hybrids as they capture braking energy to feed back to the battery for the electric drive motor.

Inside, passengers see and feel soft-touch materials atop the dashboard, around the glove box, and on the upper halves of the door panels. The touchpad-directed Remote Touch Interface lets users “pinch,” double tap, or push to access info or change views on the display screen in the dash. It is hardly the most aggravating such system around, but it still has quirks that require some precious attention from the driver. Climate and some audio settings can be managed through buttons on the center stack, but they are displayed on the screen. A programmable, easy-to-follow thin-film-transistor vehicle-information display appears between the main dials in the instrument cluster. Storage is handled by a sizeable glove box, a modest covered console box that houses USB and power ports, front-door pockets large enough to have room for a bottle holder, smaller pockets in the rear doors, and pouches on the backs of the front seats. There are two exposed cup holders in the console and two more that pop out of the pull-down center arm rest in the rear seat.

Front-row headroom and legroom are very good, but there’s not a lot of space for legs and knees between the console and door panels. That’s why soft knee-level pads on the sides of the console are a nice touch. Second-row legroom is sufficient for the vast majority of adults. Three children will fit across the rear seat—or maybe even three fit grown-ups in a pinch, thanks in part to a low floor tunnel. Rear-seat headroom isn’t as good as in front, but adjustable seat backs recline, which opens up additional space. Doors open wide and are shaped for easy entries and exits. Thick, sloping roof pillars reduce over-the-shoulder vision for the driver, and rear head rests reduce the field of view to the rear.

There’s bumper-height loading of the ample cargo bay. Tie-down hooks and a tray for incidentals under the floor pad are provided, too. For much more cargo room, the 60/40-split rear seats fold nearly flat with the load floor, though a very slight gap runs between the cargo bay and the lowered seat backs.

Any Lexus NX can deliver the space and luxuries described here, but only the 300h can do it with the bonus of such potential fuel economy.

If you’re comfortable with its rather radical styling, the Lexus NX is a thoroughly likable compact luxury crossover SUV, and the 300h delivers excellent fuel economy with little sacrifice to all-around drivability.