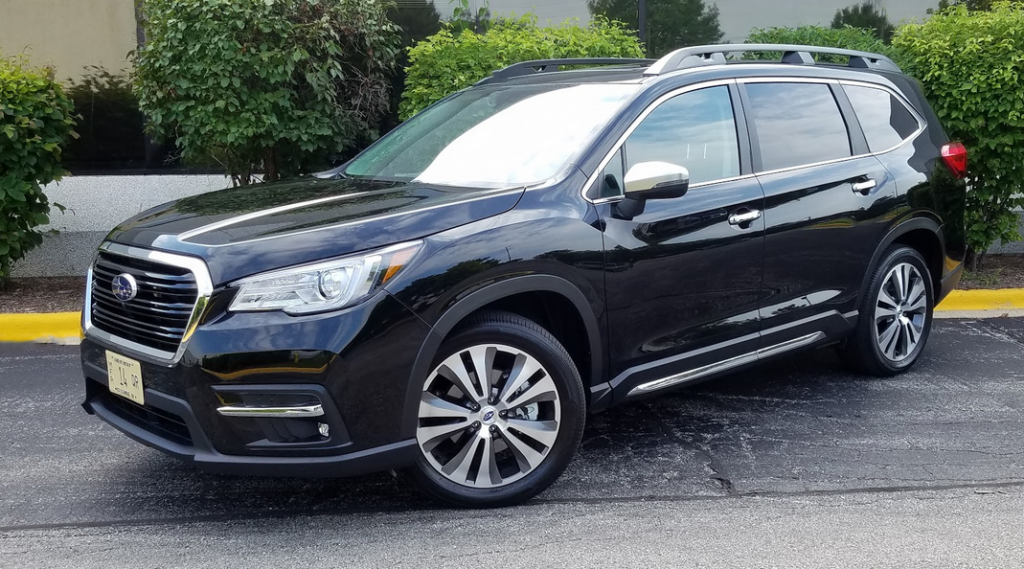 The not so good: Some occasionally odd, non-linear transmission behavior

We can’t say for sure if somebody at Subaru wrote that on a whiteboard at the first planning meeting for the Ascent midsize sport-utility vehicle, but looking at the all-new vehicle makes us wonder. It’s almost as if the planners were thinking, “All these other automakers are starting to build almost-SUV hatchbacks and wagons like we’ve been doing for 45 years, so now we’re going to crash their party. We’ll make a big family hauler and see how they like it. Boom!” 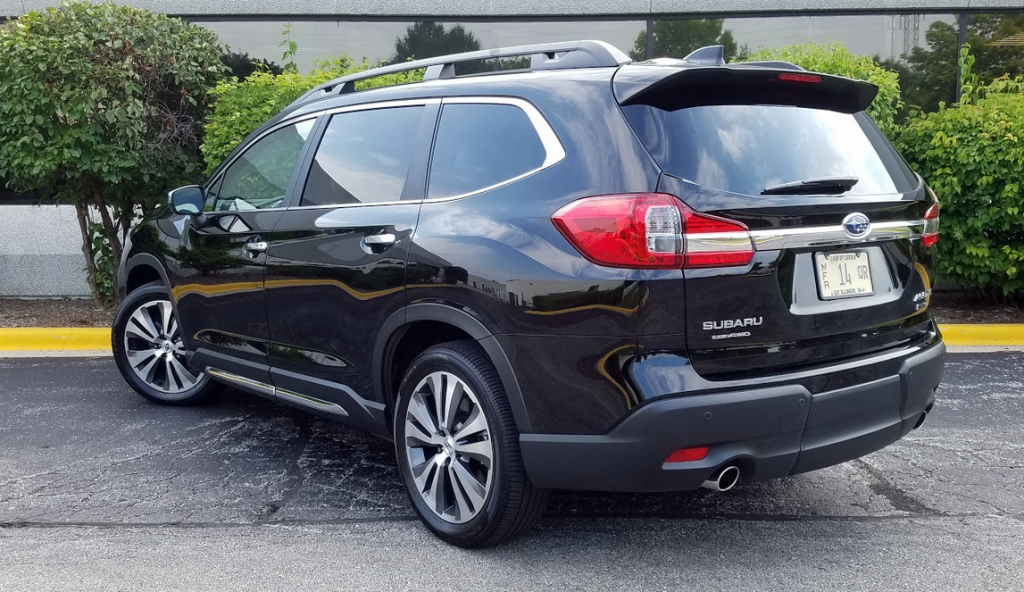 The Ascent isn’t the brand’s first try at a 3-row midsize sport-ute. It was preceded by the B9 Tribeca, made from 2006 through 2014. However, park them side by side—even on paper—and the Ascent comes off as one honking big load of Subaru. The new vehicle has 5.2 inches more wheelbase (at 113.8 inches), is a full seven inches longer overall (196.8), is wider (76 inches, plus 2.1), and is taller (71.6 inches, plus 5.1). The Ascent has more passenger capacity and cargo volume; it is more powerful—despite two fewer cylinders—but has better fuel-economy ratings; and without the “Edsel” grille of the pre-facelift Tribeca, it’s easier on the eyes.

This newbie Subie is one other thing, and that’s counterintuitive. The trend these days is toward compact and subcompact crossover SUVs, including some extremely carlike products with all-wheel drive and slightly raised ride heights. However, Subaru already has plenty of those. To expand its market reach, about the only way it could go was bigger. 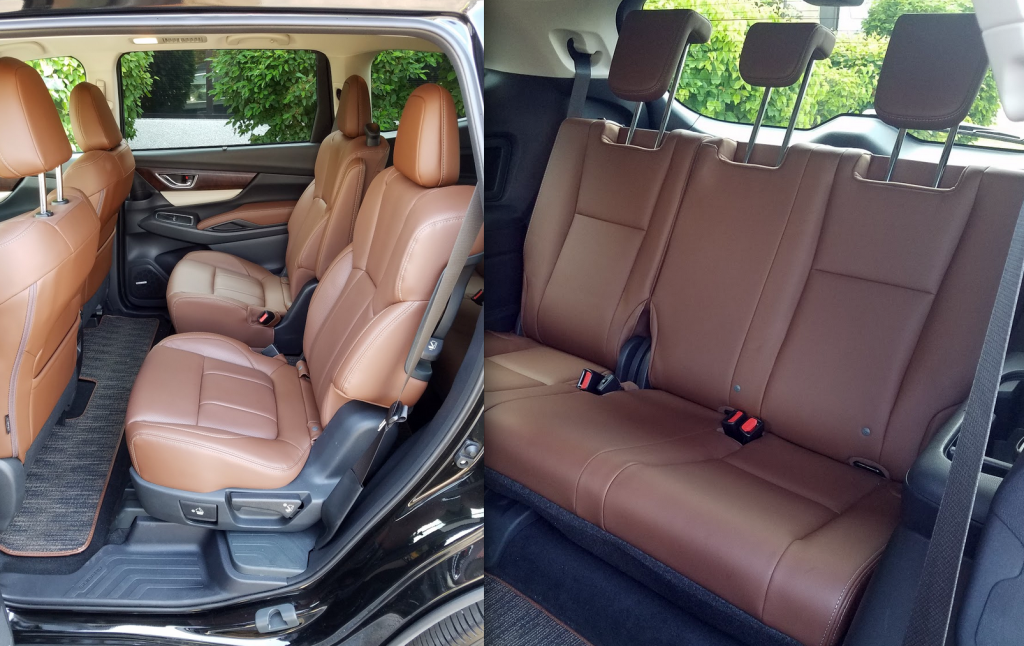 Subaru certainly didn’t skimp on trim colors and textures in the Ascent Touring’s interior. Passenger room is generous in the first and second rows, and at least competitive with class rivals in the third row.

Consumer Guide tested the high point of the Ascent, the Touring. The 7-passenger vehicle (with standard individual captain’s chairs in the second row) starts at $45,670 delivered. Remaining models are, in descending order, the Limited, the Premium, and a $32,970 base model—all of which can be had with a second-row bench seat that allows for an additional passenger.

Given its relatively big exterior dimensions, interior space is the final frontier for the Ascent. Front-row passengers won’t be crimped for legroom or headroom. The second row is similarly spacious above. Legroom is pretty good, too, and even holds up fairly well if tall front-seat occupants need to stretch out. The third row has a lower ceiling and far less legroom. It’s better suited to hold subteens—and, frankly, that’s probably the only scenario in which three people fit there so the Ascent Touring can live up to its 7-passenger billing. A single lever releases second-row seats to roll forward and tilts the seat backs, enabling entry to the third row. 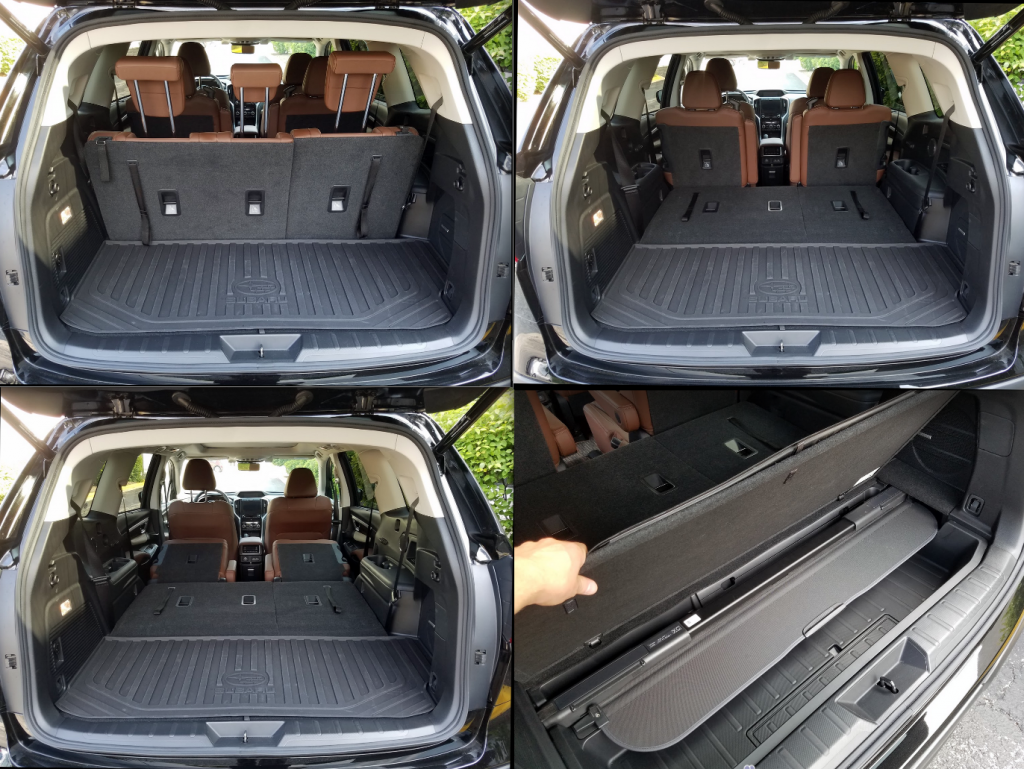 Plus-size body dimensions make for a cavernous cargo hold–86 cubic feet with the second and third rows folded. A storage bin underneath the load floor provides stowage space for the sliding rear cargo-area cover when it’s not in use.

With all seats raised, the rear cargo area is fairly short—Subaru reports that 17.6 cubic feet are available. However, space expands to a substantial 86 cubic feet with middle- and rear-row seats down. Seats fold very nearly flat to present a convenient load floor, though the Touring’s captain’s chairs will leave a gap between them. Tie-down loops are built into the sidewalls, and a storage bin under the load floor has enough room to carry the cargo cover (standard on the Touring) when not in use.

Ascent power is provided by a new 2.4-liter turbocharged “boxer” 4-cylinder engine rated at 260 horsepower and 277 lb-ft of torque. The transmission is a continuously variable (CVT) automatic. The powerplant produces pretty good go, especially after it’s had a chance to build up. The CVT doesn’t particularly hamper operation (not all transmissions of the type can make that claim), and it kicks down smartly for passing when the throttle is hammered. Like most Ascents, the Touring has a towing capacity of 5000 pounds, the most a Subaru has ever had. 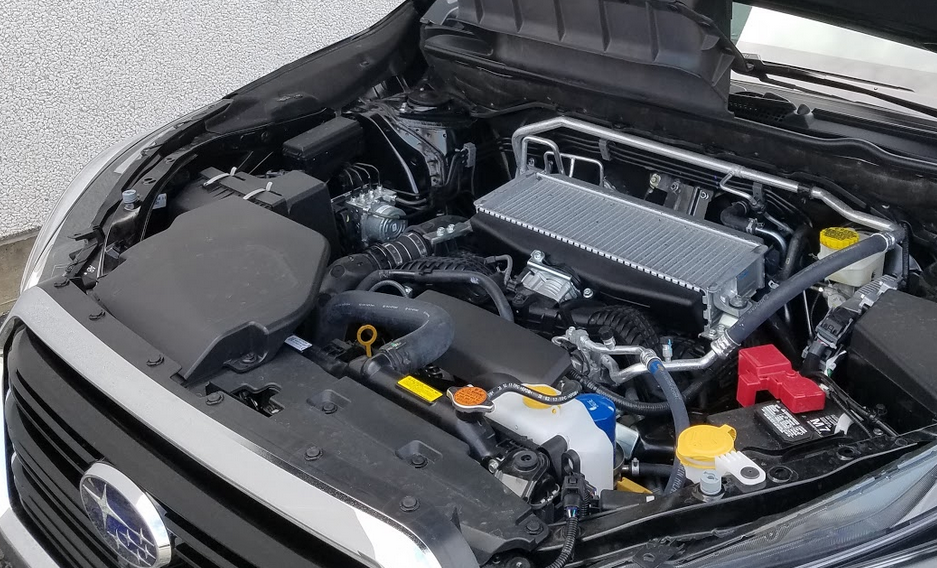 The Ascent’s lone powertrain is a 260-horsepower, turbocharged 2.4-liter 4-cylinder paired with a continuously variable transmission.

EPA fuel-economy ratings for the tested vehicle are 20 mpg in the city, 26 on the highway, and 22 combined—though base and Premium models are rated a little higher. This driver’s 224-mile stint with an even 50/50 split of city- and highway-type operation wasn’t quite that good at 19.6 mpg.

In addition to being fairly pleasant to drive, the top-grade Ascent is quite plush to occupy. Padded and soft-touch surfaces cover significant portions of the dashboard and doors. The black dash and doors are relieved by Ivory leather accents, but a third color is introduced in the Java Brown perforated-leather seats. Frankly, with woodgrain trim on the console and doors thrown in, it’s almost a little too much décor. Personal-item storage is excellent—the console box is huge, and has an organizer tray for smaller items for which you might not want to fumble at the bottom of that big space. Cup and bottle holders sprout from the console, the door pockets, and the rear sidewalls for third-row denizens.

The Touring’s standard tri-zone climate control has three convenient dials up front, and middle-row passengers have their own control panel (including seat-heat buttons) on the back of the console. An 8-inch touchscreen through which audio selections and presets are easily made also displays navigation, apps, and other elements of Subaru’s STARLINK infotainment system.

Other tech features of note include Apple CarPlay/Android Auto smartphone integration, keyless access and starting, reverse automatic braking, and blind-spot detection with lane-change assist and rear cross-traffic alert. A “smart” rearview camera mounted inside and at the top of the tailgate can be activated by a simple lever flip to display in the rearview mirror. It’s handy when cargo or back-row passengers are blocking the driver’s straight-back vision, though in nighttime use this driver found it to be somewhat indistinct. A panoramic moonroof, Harmon Kardon premium audio system, and heated steering wheel are among the comfort and convenience touches.

For size, driving demeanor, and feature availability, Subaru seems to have done pretty well for itself with the Ascent, even if it’s taking the brand into unfamiliar territory.

Subaru goes bigger than it ever has before with the all-new Ascent SUV, and comes up with a likable alternative to three-row class rivals such as the Honda Pilot, Toyota Highlander, and Volkswagen Atlas.