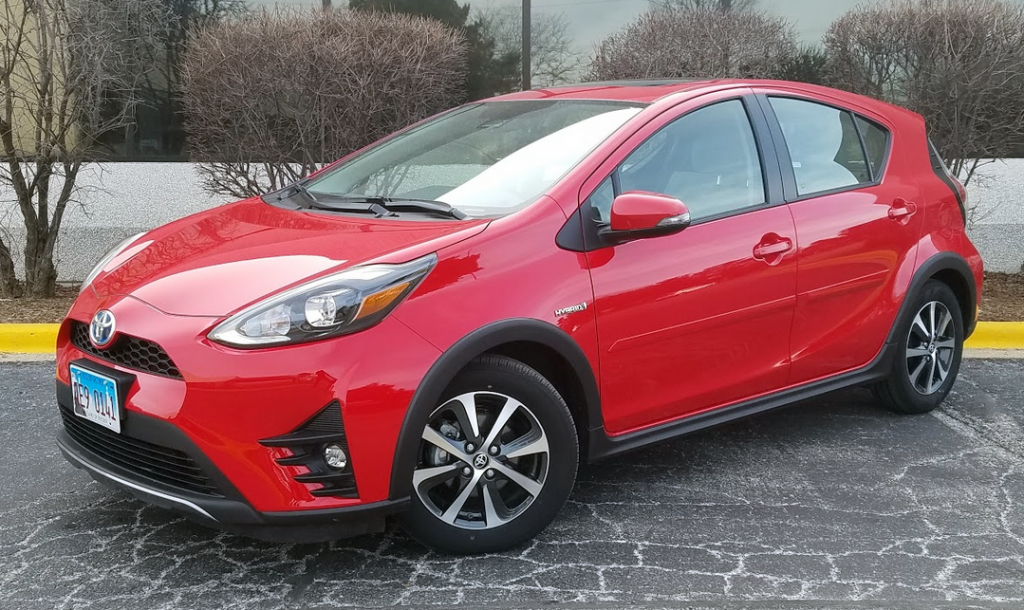 The good: Decent passenger room for a subcompact car

The not so good: Sleepy acceleration, budget-grade interior materials

Practically everything about the Toyota Prius c is small: the footprint, the power rating, even the wheel diameter. Fortunately, the one thing about the subcompact hatchback hybrid that’s undeniably big is the number of miles it goes on a gallon of gasoline. 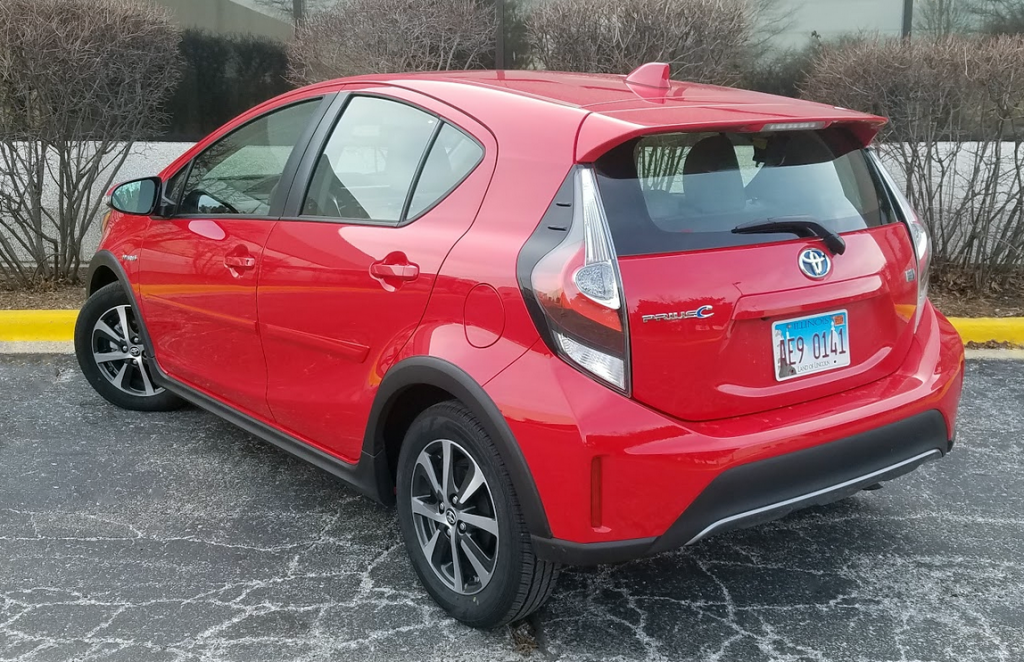 Our Prius c test vehicle came equipped with the extra-cost flat-black body-side moldings, which gave it a slightly beefier look, relatively speaking. Sixteen-inch alloy wheels are available, but our tester had the standard 15-inch alloys.

Toyota’s smallest hybrid—wheelbase is 100.4 inches; total length is 162.4 inches—squeezes all of 99 horsepower from its 1.5-liter 4-cylinder gas engine and synchronous AC electric motor. The EPA estimates that this powerplant with the standard continuously variable transmission (CVT) is good for 48 mpg in city driving, 43 mpg on the highway, and 46 combined. When this reviewer drove the Prius c Four that Consumer Guide® was given to test, he recorded 49.43 mpg after a stint of 256.2 miles that was made up of just 45 percent city-type driving.

Even in top-line “Four” trim, the Prius c’s cabin is clearly built to a price. The dashboard layout, with its center-mounted instrument panel, is a bit odd, but our testers acclimated easily enough. Rear-seat space is decent for the subcompact-car class, but legroom is stingy behind a tall front-seat occupant.

Drivers get some say in how economically a Prius c operates—in addition to going easy on the gas pedal, that is. They can select “EV” or “ECO” modes from buttons on the console. In some conditions, EV lets the car run solely on battery power for up to 0.5 mile—but it didn’t seem to want to let this driver go 0.5 foot. ECO tempers both the operation of the climate system and the throttle response. 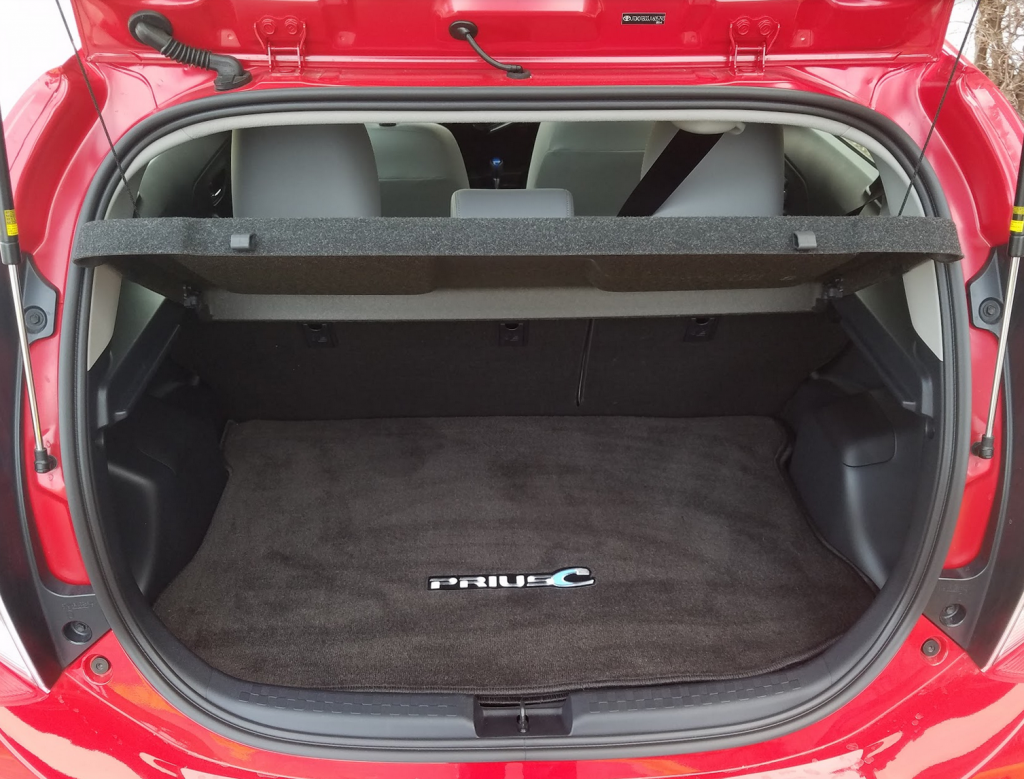 The Prius c offers 17.1 cubic feet of cargo space behind the rear seats, which is comparable with other subcompact hatchbacks.

Bits and pieces of the Prius c have changed since its 2012 debut, but some characteristics haven’t. The laudably frugal powerplant doesn’t make for the greatest performer. Even with ECO switched off during in-town driving, standing-start acceleration is leisurely. With full gas and electric power working in tandem on the highway, the Prius c is never slow enough to be dangerous—it competently keeps up with traffic—but acceleration takes time to build. (Blame the CVT somewhat for that.) Between full-throttle operation and the “vocal” narrow low-rolling-resistance tires there’s a fair amount of noise on the open road.

This fairly small car will hop a bit over major pavement imperfections, but it generally rides comfortably. Steering is light and reasonably quick for good maneuverability in tight areas like crowded parking lots.

Displays for navigation and the easily programmed audio system register on the central touchscreen. Climate controls are confined to a triangular pad below the display screen. A large dial lets the operator quickly sets temperature; a small group of buttons (some repetitive-push) serves the other functions. Readouts for the digital speedometer, fuel gauge, and multi-information display appear on a deeply hooded oblong screen at the top center of the instrument panel. Seat-heater and drive-mode switches are grouped on the console, but it requires groping around the parking-brake lever to reach them. 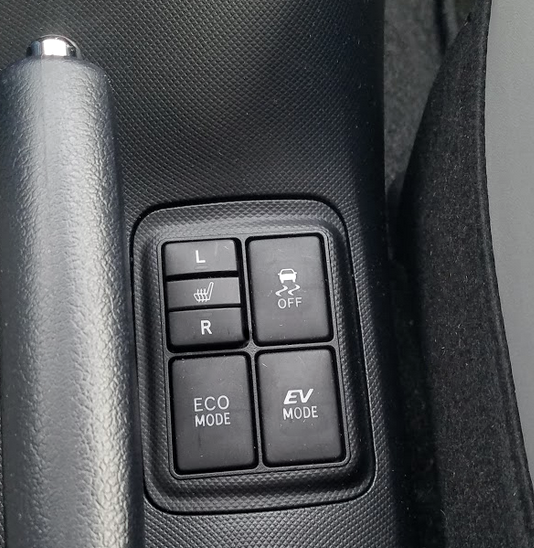 Drive-mode, traction-control, and heated-seat controls are nestled into the center console beside the emergency-brake handle.

Fairly equally matched passengers, say sub-6-footers, will find pretty good legroom for a subcompact-class car. However, if a given passenger’s height calls for stretching out some, it may take a degree of fun out of the ride for the person directly ahead or behind. The moonroof reduces available headroom in both rows—this 5-foot-10.5 tester had inches to spare in both rows but taller occupants would likely test the limits. Seating is for four adults. Three youngsters might fit across the rear seat, but the one that’s being punished for something ought to get the stiff center position. There’s not much in the way of soft surfaces around the cabin, even in the “premium” Four model. Textured plastic with almost no underlying flexibility covers the instrument panel and the door panels. Door armrests are the exception to this rule.

Most personal-item storage is found in the front-seat area. The glove box actually is pretty big, and there’s an exposed tray (with the auxiliary-jack and USB plug-ins) above it. The console holds two open cup holders ahead of the shift lever and a small, narrow covered cubby. Open spaces of varying shapes and sizes exist in the console and on the dash ahead of the steering wheel. Modest front-door pockets incorporate bottle holders. Rear storage consists of a pouch on the back of the front-passenger seat and a single cup holder that folds out of the back of the console.

Limited cargo space will probably hold a couple of small pieces of luggage or a week’s groceries for two. Retracting the 60/40-split rear seats creates lots more space. The seats fold flat, but rest at a level a few inches above the cargo floor, which complicates loading long objects.

The $24,965 base price of CG’s Absolutely Red test vehicle rose to $26,293 with delivery and optional body moldings and floor mats—a believable price for a subcompact hatch with some luxuries attached to it. The good fuel economy (and attendant range) might make the Prius c a tempting long-drive car for some, but its limited power sours that. It seems best suited as a nimble, parkable city car. That’s where it comes up big.

It’s no speedster, the interior isn’t the most luxurious place to be, and you pay a premium for the fuel-sipping hybrid hardware, but the Prius c offers outstanding fuel economy and decent passenger/cargo room for its size.