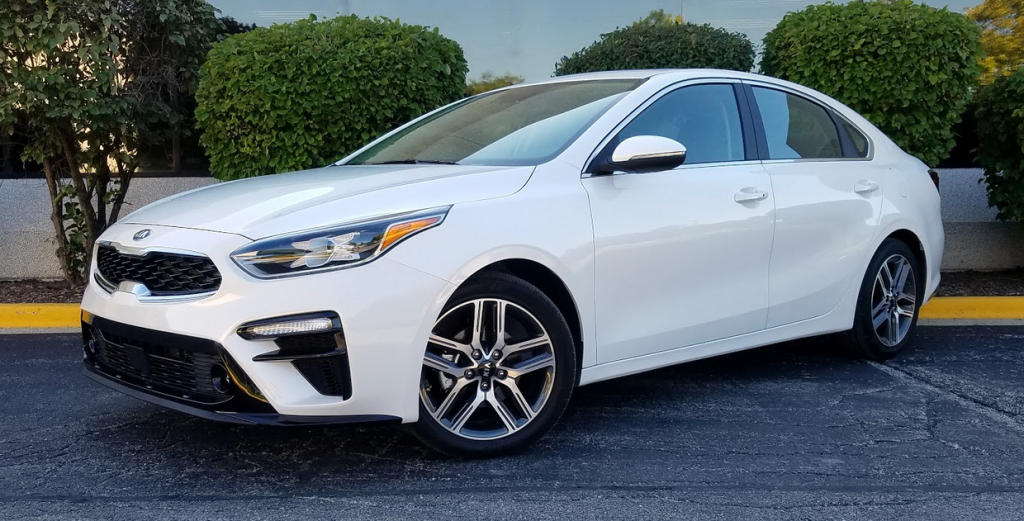 The great: Highly competitive pricing with an excellent level of features for the money

The not so good: Engine can get noisy in fast acceleration; fuel economy a bit disappointing relative to EPA estimates

Kia makes the Forte a little larger and gives it a new powertrain and additional technology features for 2019, but can still sell it on price. It takes as little as $17,690 to get one, and at its most “loaded,” as an EX, the starting tab (before delivery and options) is $21,990. 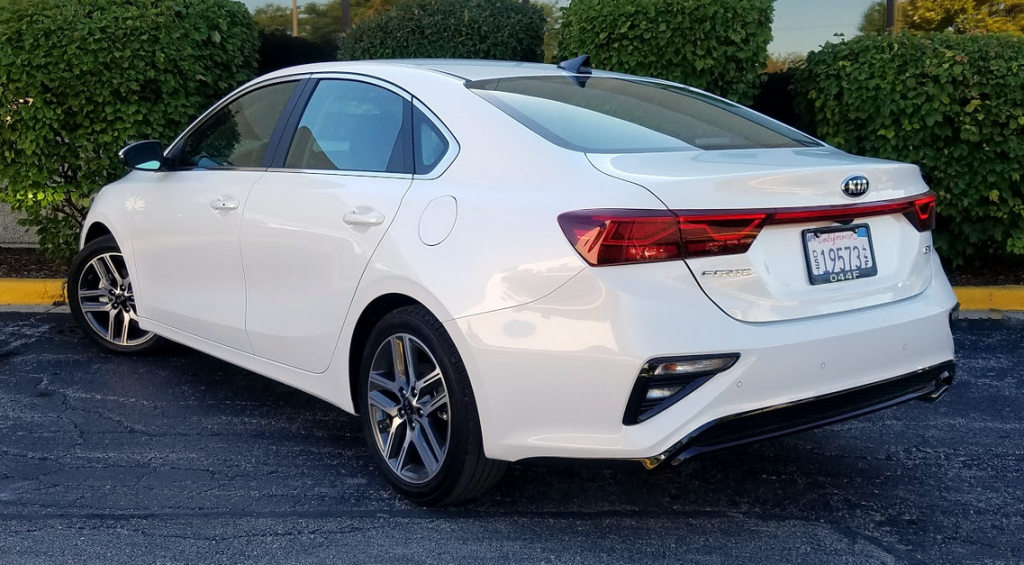 From most any angle, the Kia Forte presents itself as a pleasantly mainstream compact sedan with a nice sprinkling of sporty flair. EXs come standard with LED taillights and daytime running lights, as well as keyless entry and starting.

Consumer Guide tried out a redesigned Forte EX that showed itself to be a convenient, contemporary compact sedan. It doesn’t swaddle passengers in indulgent luxury—how could it at that price?—but there are enough amenities to make the car enjoyable. Similarly, driving dynamics are fairly pedestrian under most circumstances, but the Forte does have its moments.

The new fourth-generation Forte gets fresh styling, but with familiar cues. Indeed, Kia claims the design draws inspiration from its premium Stinger hatchback sedan that bowed for 2018. From the bottom up, the revised model hierarchy consists of FE, LXS, S (with or without Premium Package), and EX versions.

In top-line EX trim, the Kia Forte’s interior is quite nice for the price, and it’s equipped with a respectable array of upscale features, such as heated/ventilated front seats and wireless device charging. 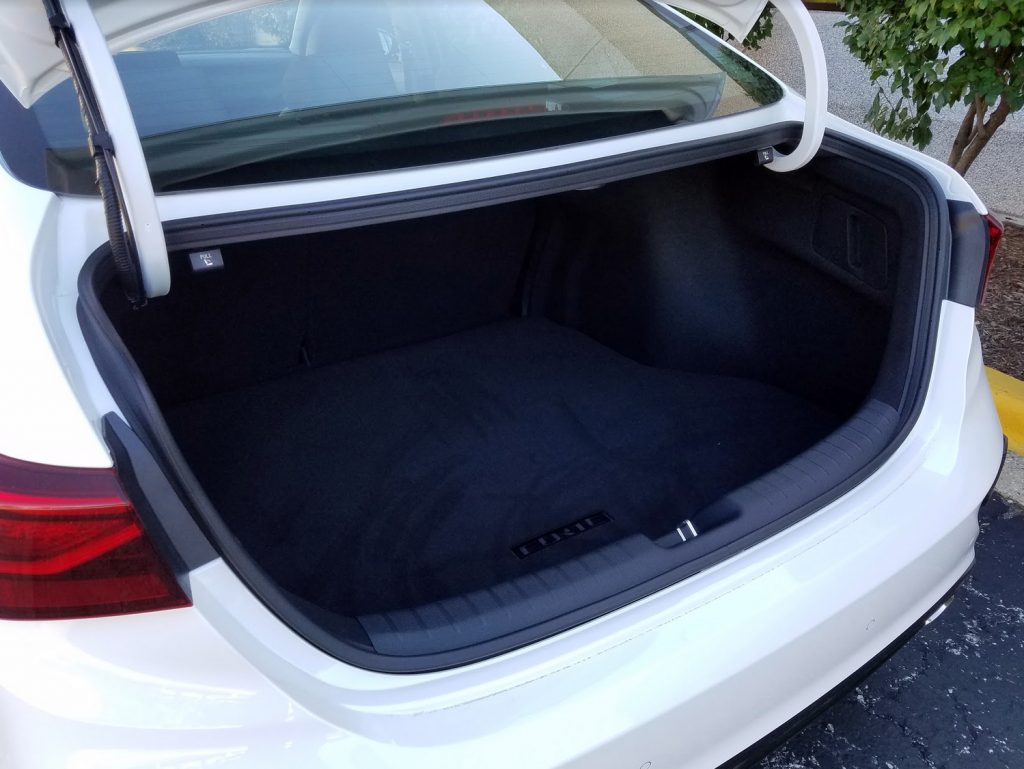 The Forte’s trunk offers 15.3 cubic feet of space–on par with most class rivals.

There’s just one engine provided for the Forte, a 2.0-liter “Nu” 4-cylinder that develops 147 horsepower and 132 lb-ft of torque. Those are the same power levels that the 2.0 made in 2017 and ’18. What does change is that the transmission used in most models is Kia’s new continuously variable “Intelligent Variable Transmission” (IVT). It employs an adaptive shift logic that replicates the feel of a stepped-gear automatic, which minimizes the vague “rubber-band” effect that besets many such transmissions. (A 6-speed manual gearbox is available, but only in the FE, which can also be had with the IVT for an extra $900.)

The engine is adequately peppy for around-town driving, and maintains good pace on the highway, albeit loudly when pressed hard. Tapping the drive-mode button into “Sport” heightens throttle response and changes transmission behavior. RPMs rise relative to a given speed much the way they would with a geared automatic trans in which shift points were delayed to extract more pull from the engine. This is handy for no-sweat highway passing or merging. The transmission is encased in a sound-insulating cover that—happily—stanches the unpleasant drone typical of continuously variable transmissions during acceleration.

With this powerteam, the EPA rates the 2019 Forte at 30 mpg in the city, 40 mpg on the highway, and 35 combined. All are increases from the previous 2.0-liter/automatic pairing—by as much as three mpg in the case of the combined-mileage rating. There is a gas-nursing “Smart” driving mode to help out when full power delivery isn’t a priority. However, while some CG testers bested 30 mpg in their evaluation drives, this reviewer recorded just 25.5 mpg from a run of 189 miles that included 65 percent city-type driving with a very brief period in Smart mode.

The latest Forte’s road manners are no ride and handling revelation, but they aren’t especially objectionable either. Small to moderate pavement bumps and cracks are squelched pretty well. Steering ease rates higher than precision, but the car is easy to maneuver on busy city streets and in and out of parking spaces. A few quick turns showed the Forte to be stable in cornering with decent control of body roll. Brake action and response were good. 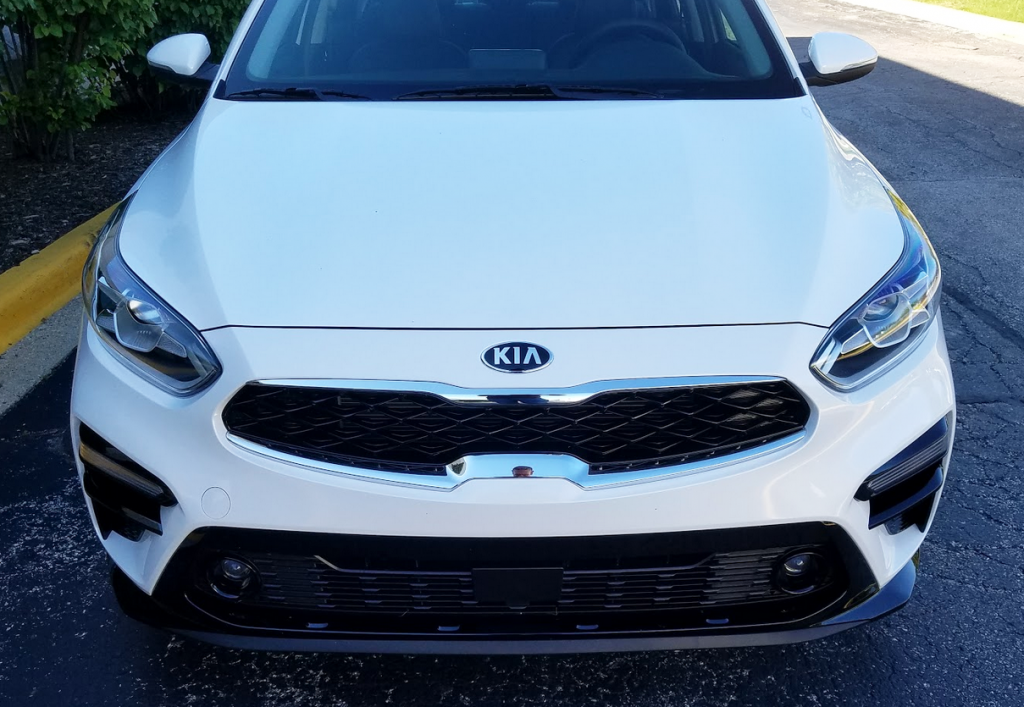 The fine passenger space of the previous Forte isn’t diminished in the new one. Indeed, rear-seat legroom continues to be a highlight of this small car. A low, flat floor hump makes it possible for a third passenger—possibly even of the adult variety—to occupy the middle of the back seat. Headroom is good all around, even under the optional power sunroof. Driving and convenience controls are laid out well with good accessibility. External tuning and volume knobs speed up audio selections that are easily input on the bright tabletlike display screen. A pair of rotating dials facilitates quick, direct temperature selections on the climate system; push buttons manage other heating and cooling functions. Soft or compressible surfaces are found on the upper half of the instrument panel, the tops and centers of the front doors, the console lid, and all armrests for a hint of premium-car feel.

The glove box is big enough to be handy but the squarish cubby box in the console is on the small side, and it cedes room to a USB port. An open space ahead of the console contains USB, auxiliary, and power outlets on a bottom level, with a top level available for the optional Qi wireless device charger. Both front door pockets incorporate a bottle holder; a pair of open cup holders is provided in the console. Rear storage is limited to a single net pouch on the back of the front-passenger seat, bottle holders in the doors, and cup holders in the pull-down center armrest.

Cargo capacity benefits from a well-shaped, flat-floored trunk that should be able to contain several pieces of luggage or a good load of groceries. A little additional space is available around the spare tire under the trunk floor. Note that exposed gooseneck trunklid hinges do extend into the cargo space. The rear seats fold in a 60/40 split to accept larger loads. When lowered, the seat backs lie almost flat, but they rest a few inches above the level of the trunk floor. A bulkhead between the trunk and cabin imposes a slight limit on the size of items that can be loaded into the back-seat area.

All in all, value-conscious car buyers can find much to like about Kia’s redone Forte.

All Kia Fortes are powered by a 147-hp 2.0-liter 4-cylinder engine. S and EX models come standard with 17-inch wheels.