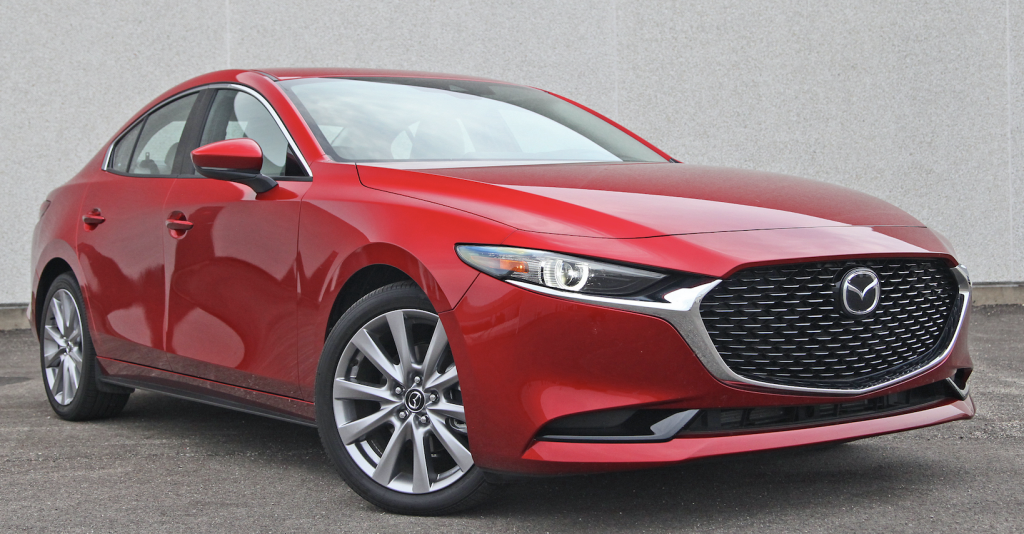 The not so good: Control layout, limited rear-seat room

After testing an all-wheel-drive hatchback earlier this year, we finally had an opportunity to try out the sedan version of Mazda’s compact car, which was redesigned for 2019. The redesign not only added all-wheel-drive versions, but also moved the car upscale, at least in top trim levels. Which, in both cases, is what we sampled.

Always on the sporty side, the new-for-2019 Mazda 3 is now aimed at a “premium” target, which shows in upper-line models by virtue of appointments, available features … and pricing. Our loaded test sedan was nicely appointed and had a host of nice features — including all-wheel drive — but topped $31,000.

Not surprisingly, we found the Sedan to be much like the Hatchback — but with a trunk. It also had better rear visibility thanks to thinner rear roof pillars, making overall visibility quite good. 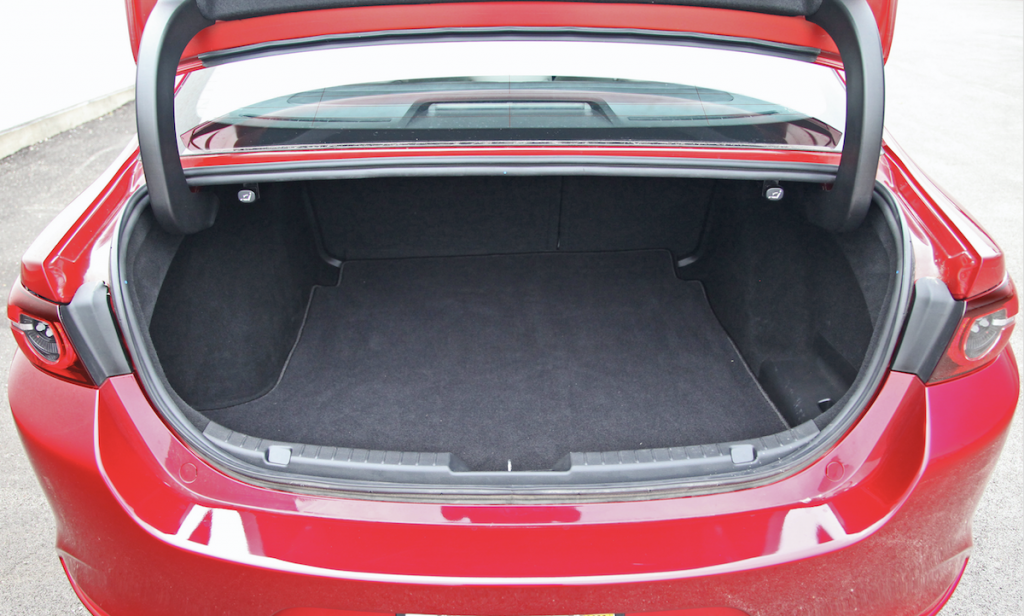 The trunk is spacious enough, though sickle-shaped trunk-lid hinges dip into the load area. There’s scant under-floor storage — none if you get the high-end stereo, which fills what’s there with a speaker — but the rear seat backs fold virtually level with the load floor (making it easier to slide long items forward) a rarity for sedans in the compact class … and in fact, sedans in general.

Something we really liked that was carried over from the hatchback body style (where it’s fairly common) to the sedan (where it’s not) is that the rear seat backs fold down to rest nearly flush with the trunk floor, which makes it easier to slide long items forward — a big plus in our book. The only downside is that there’s scant storage space beneath the cargo floor, and that’s just “unofficial” space inside the wheel of the spare tire — and even that’s not an option if you opted for the high-end stereo, which puts a speaker in that spot. 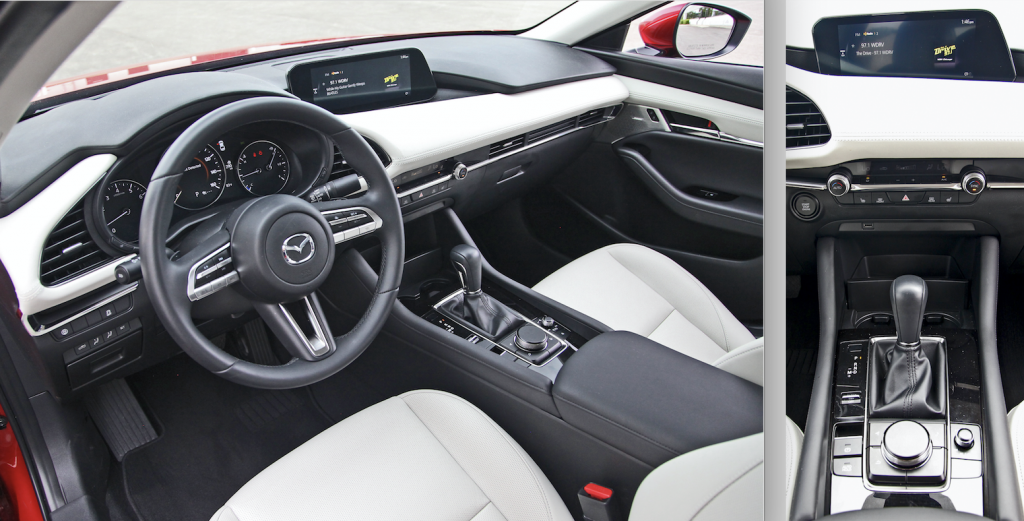 It’s a mixed bag inside. On the positive side, appointments on our tester were top-notch and there were lots of neat features. On the negative side, the infotainment system is controlled exclusively by two console knobs (no touch screen), which wildly complicates what should be easy adjustments.

Something also carried over was the control layout … which we didn’t like. Mazda went to console knobs to control most functions in the last generation — greatly complicating adjustments — but at least you could access the touchscreen when the car was stopped to ease most processes. No more. Now the screen is non-touch and of a lower/wider profile, the latter of which helps in some ways (like the rearview-camera image), less so in others (like the navigation screen). But you now have to do everything through the console knobs, which will make you dread having to do such “complicated” tasks as, say, inputting a new radio station into memory.

Another annoyance we noticed — in both 3s tested — was that the electronic parking brake automatically activated when putting the car in Park, but after start-up and putting the car in Reverse, it didn’t want to automatically de-activate. Most times it would do so after you had the gas pedal down for a moment and the car had reared up a bit, but a couple of times — usually first thing in the morning — it wouldn’t release at all; you had to flip the console button. We’ve never noticed this on any other brand of car.

Although passenger space isn’t overly plentiful, it’s more than adequate for four average-size adults, with the rear seat limited to those up to about 5’10 — and even they will be short of legroom if the seat ahead is moved far back. But that’s why there’s the larger Mazda 6. Interior storage space isn’t overly plentiful either, but also adequate. 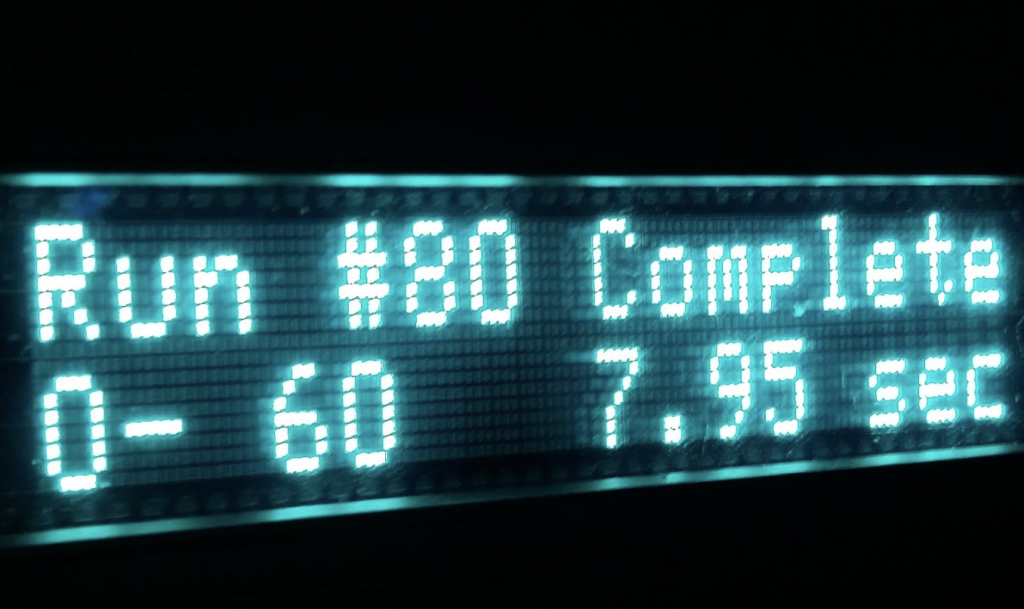 The Mazda 3 tripped our timer at an average of just under 8 seconds in the 0-60 dash, a fairly good showing. But what wasn’t shown was the great throttle response, aided by quick downshifts of the 6-speed automatic transmission.

A strong point of the 3 is its powertrain. The standard 2.5-liter 4-cylinder is large for the class, as is its 186-horsepower output. And it’s linked to a conventional 6-speed automatic transmission (a 6-speed manual is available on the front-drive hatchback), a combination that provides an impressively strong full-throttle jump off the line and even more impressively quick kickdowns when the throttle is stabbed at speed. We timed our tester at just under 8 seconds 0-60; while not a stellar performance, it’s good for the class, with linear response being a nice add-on. The suspension provides a reasonably comfortable if not entirely sporting ride/handling combination, all of which puts “driving dynamics” into the 3’s plus column.

Also residing there are interior appointments and feature availability. At least on top-line models, lots of interior surfaces are padded, and two-tone color combinations are offered — black/white on sedans, black/red on hatchbacks — all of which lends the upscale ambiance Mazda says it’s shooting for. And in addition to all the expected high-tech features, the 3 makes available some that are unusual for the class, including a head-up display, power driver seat with memory, rain-sensing wipers, adaptive headlights (they turn with the front wheels in corners), and adaptive cruise control with stop & go capability (great in traffic).

Mazda’s 3 has long stood as kind of a sporty entry in a class where that’s not the norm. While that still holds to some degree, higher-line models now also push the upper boundaries when it comes to luxury and features, and all versions throw the advantage of available all-wheel drive into the mix. That allows the 3 to continue standing out in the compact crowd … though for entirely different reasons.

With its upscale appointments, available all-wheel drive, and rather sporty demeanor, the Mazda 3 carves a nice niche for itself in the compact class. Particularly if you live in the snow states and want all-wheel drive — which considerably narrows your sedan choices — this car should be on your list.