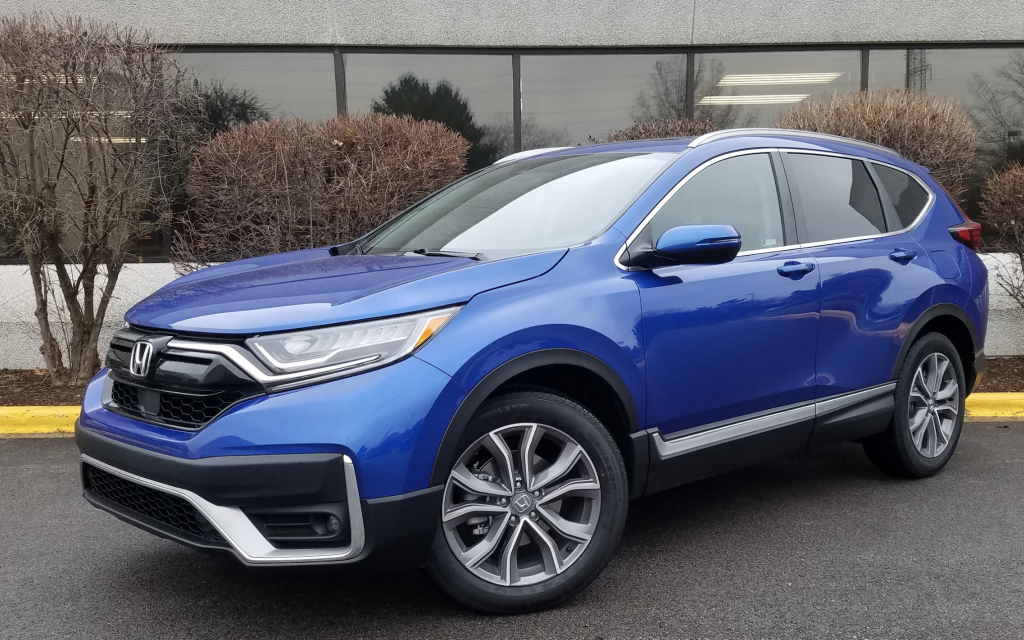 The not so good: Complicated control layout, limited option availability

Honda’s CR-V is one of the original compact crossovers (called “SUVs” back then), and since its introduction, it’s become one of the best-selling of all time. Even as more competitors have come on board, it remains near the head of its class today. And our tester was a strong illustrator as to why. 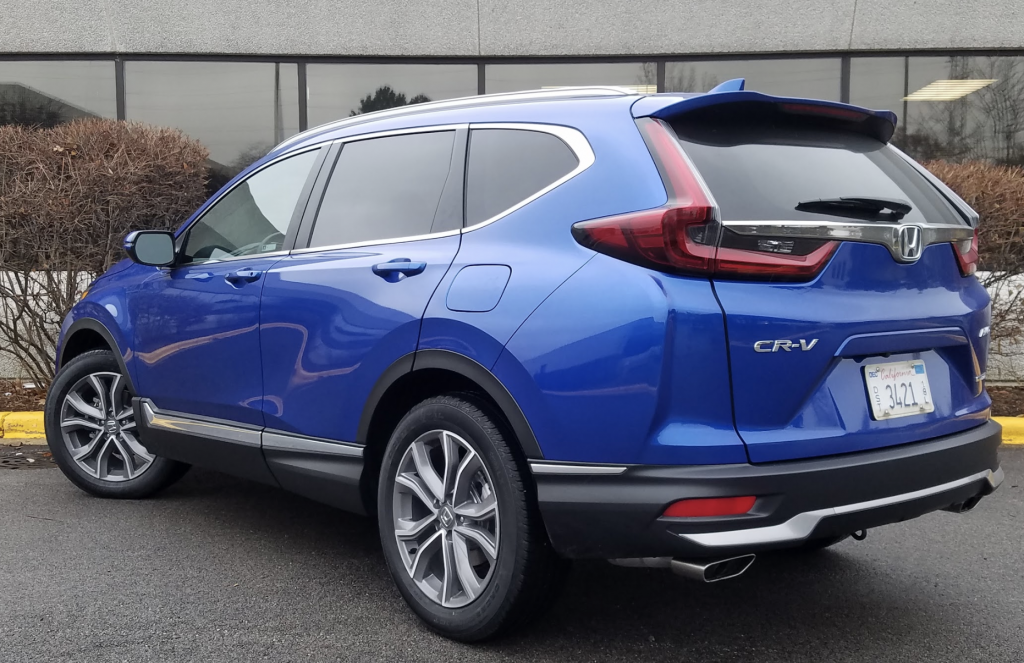 New taillights join with different wheels and a revised front end to freshen the CR-V for 2020. The tested 2020 Honda CR-V Touring wore some ritzy exterior accents that made it look like the top-line model it is.

We reviewed a similar Touring trim level of the CR-V last year, so here we’ll cover what’s new for 2020, add some additional impressions, and discuss what makes the CR-V such a strong choice in this very competitive class.

Most noticeable for 2020 is a new front-end look with a revised grille and fascia. But the taillights are different as well, as are wheel designs. On the mechanical side, the 190-horsepower 1.5-liter turbocharged engine previously offered on upper-line models is now standard across the board, replacing the last year’s base 185-horsepower 2.4-liter four, and hybrid models have been added in the same four trim levels (LX, EX, EX-L, and Touring) as other CR-Vs. Also newly standard is Honda’s Safety Sense suite of high-tech safety features, which previously came in at the “step up” EX trim level, and the top-line Touring we tested adds standard Qi wireless cell-phone charging.

On to the vehicle itself.

In last year’s review, we didn’t give the 1.5-liter turbo high marks. But although both engine and transmission specs remain the same, this year’s vehicle felt … livelier. Small turbos like this are notoriously “flat” in a full-throttle launch, with power coming in about 20 feet off the line. This one, however, felt reasonably strong off the mark, and when we “put it on the clock,” it averaged less than 7.4 seconds in the 0-60 dash, a very respectable showing. Furthermore, the turbo/CVT automatic transmission combination provided quick kickdowns when the throttle was stabbed at speed, so “acceleration” should no longer be considered a CR-V weakness.

Ride quality, on the other hand, was never in doubt; we liked it last year, and that impression carries over. There’s a suppleness over bumps that makes the CR-V stand out from the crowd in this respect, while handling remains nimble. It’s also very quiet in highway cruising. So all told, the CR-V scores well in dynamics.

One of the CR-V’s niftier interior storage solutions is this large 2-tier console box with a sliding tray that can also be flipped up to open a sizable space.

It also scores well for packaging. The cabin boasts a large glovebox, large 2-tier console box with sliding/flip-up cover, a console tray, two cupholders, a shallow tray in front under two USB ports with Qi charger in its base, and map pockets with cupholders in the doors. While front headroom is only fair with good legroom (and our tester included a tilt seat cushion and lumbar support for the driver — both comfort pluses), rear-seat space is terrific. There’s 6-footer+ headroom and lots of legroom, even behind a fully rearward front seat. A nearly flat floor gives a center-seater fine foot space while large doors provide easy egress, and in the Touring, at least, rear passengers get vents and two USB ports. The Touring is also nicely trimmed inside, giving justification to our tester’s near-$36,000 sticker. 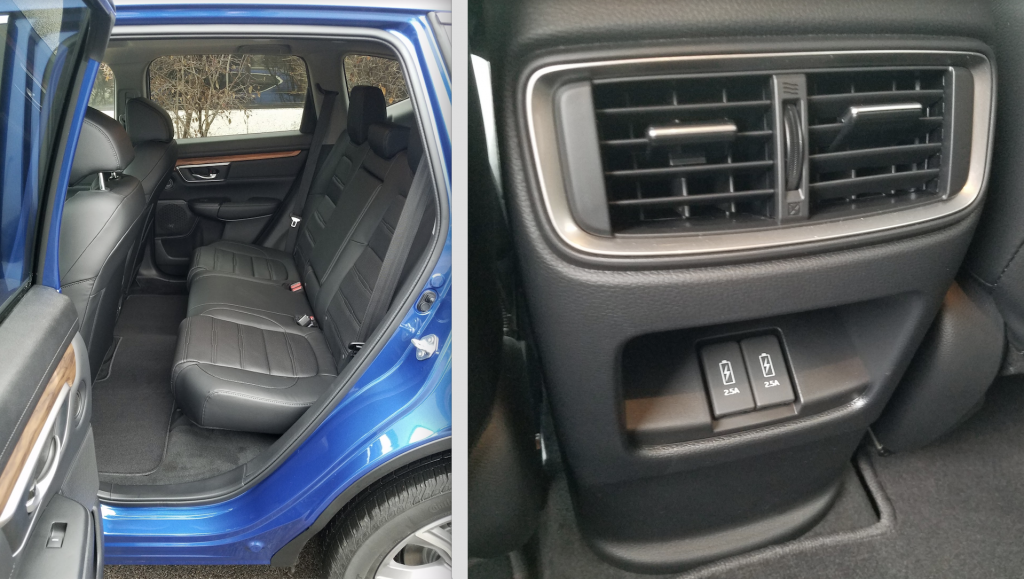 There’s full-size-adult room in back, and a nearly flat floor affords good foot space for a center-seater. Passengers also get their own vents (not a given) and dual USB plugs (ditto).

While visibility is good to the front, it’s just OK to the sides, and only fair to the rear. But the rearview camera displays a wide-angle 180-degree view when backing, a real plus.

That brings us to the control layout … where the CR-V loses some points.

With its woodgrain accents and numerous padded surfaces, the interior stands out for its luxury look and feel. However, the control layout could be handier, as tuning and climate-system mode adjustment have to be done through the touchscreen. On the plus side, the controls are mounted high, in easy reach, and the rearview camera offers a 180-degree view, which is very helpful when backing out of parking spots.

A few years back, Honda got rid of both the volume and tuning knobs for the audio system, and really took some heat for it — so much, in fact, that it brought back the volume knob. But tuning is still done through repetitive-step virtual touchscreen buttons — a nuisance — though all are within easy reach. Climate controls aren’t much better. There are rotary temperature knobs for the Touring’s dual climate controls, but fan speed is a repetitive-step pushbutton, and mode has to be adjusted through the touchscreen.

The 2-tier cargo floor doesn’t offer more than about two inches of added height in its lower setting (right), and leaving it in the raised one (left) gives that space to underfloor storage (aided by some in the “bowl” of the spare-tire’s wheel) and makes it rest level with the cargo opening and the folded year seat backs.

Things pick up again in the cargo area. Not only is it nicely cubic, it’s wide at the rear with handy bins at the sides. The cargo floor can be set at two heights, and at the upper one, the cargo floor is level with the folded rear seat backs, which can be released from the cargo area or with latches on the seat backs themselves, a handy touch. While there’s little “official” under-floor storage, there is some space in the wheel of the spare tire, and the Touring includes a power liftgate that opens level with the raised cargo floor. So “cargo-carrying ability” is another strength.

Per Honda tradition, the CR-V doesn’t offer much in terms of options, so you’re pretty much stuck with whatever the four trim levels provide. That certainly eases ordering — for both you and the dealer — and means the dealer doesn’t need to stock as many vehicles to give you one in the color you want. And since the CR-V is certainly a vehicle that should be on your compact-crossover shopping list, that could well end up being one more point in its favor.

To many, Honda’s CR-V is the quintessential compact crossover, being among the originals and all-time best sellers. The latter is fully warranted, with the 2020 version holding its own against some strong competition. And for 2020, a Hybrid model has been introduced, adding “fuel economy” to its strengths.