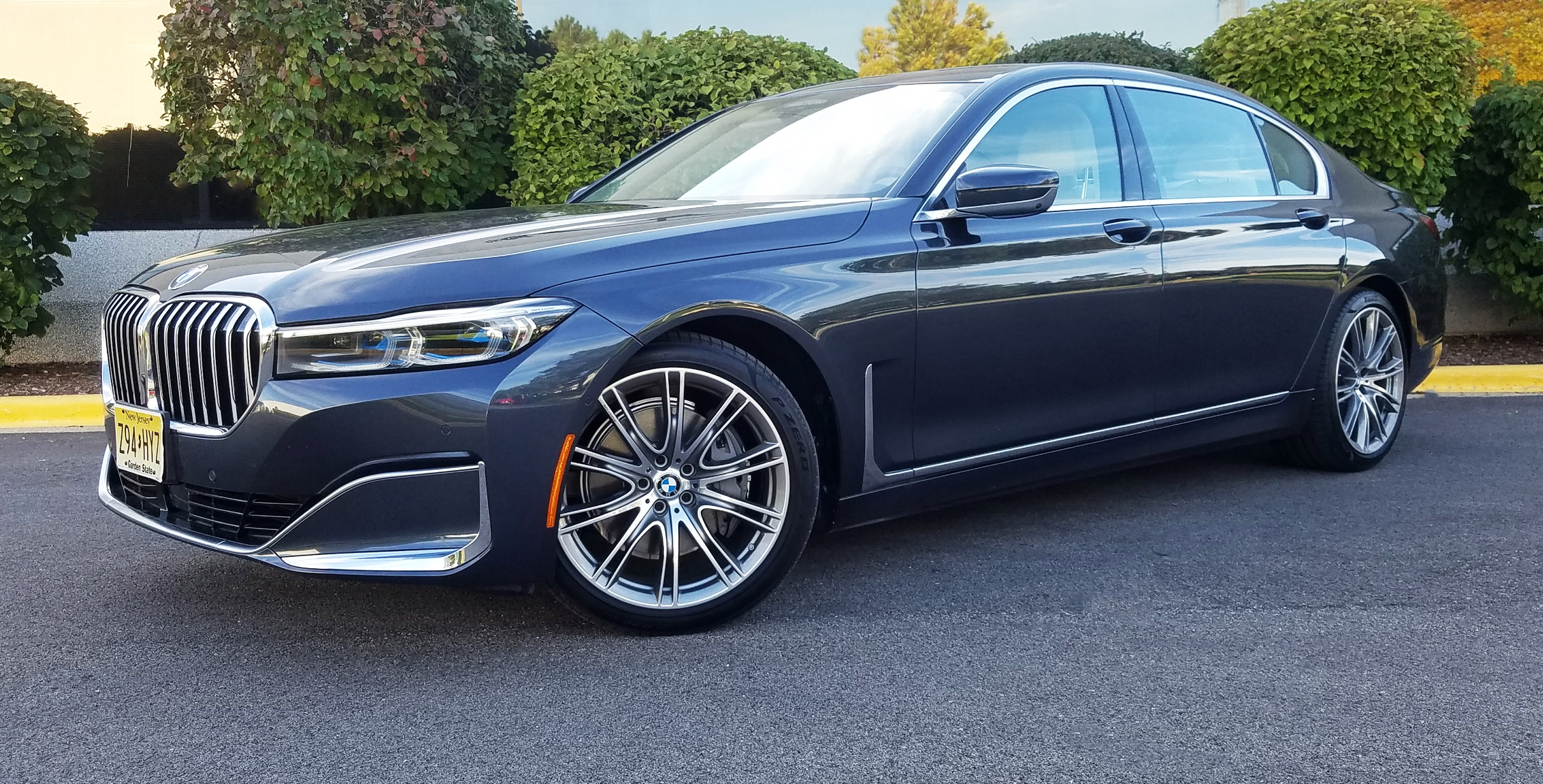 The good: Respectable fuel economy for the size and power on tap

The not so good: So-so small-items storage and cargo versatility for a large car; some complicated infotainment controls

What’s the big deal with the BMW 7-Series? Hey, what isn’t?

The largest of the Bavarians’ sedan models, the 7 has the precise definition of “ample” for rear-seat legroom. Power alternatives run from a 335-horsepower inline 6-cylinder engine all the way up to a V12 that makes 601 horsepower, i.e. a lot. Shoot, even the grille is bigger than ever for 2020. 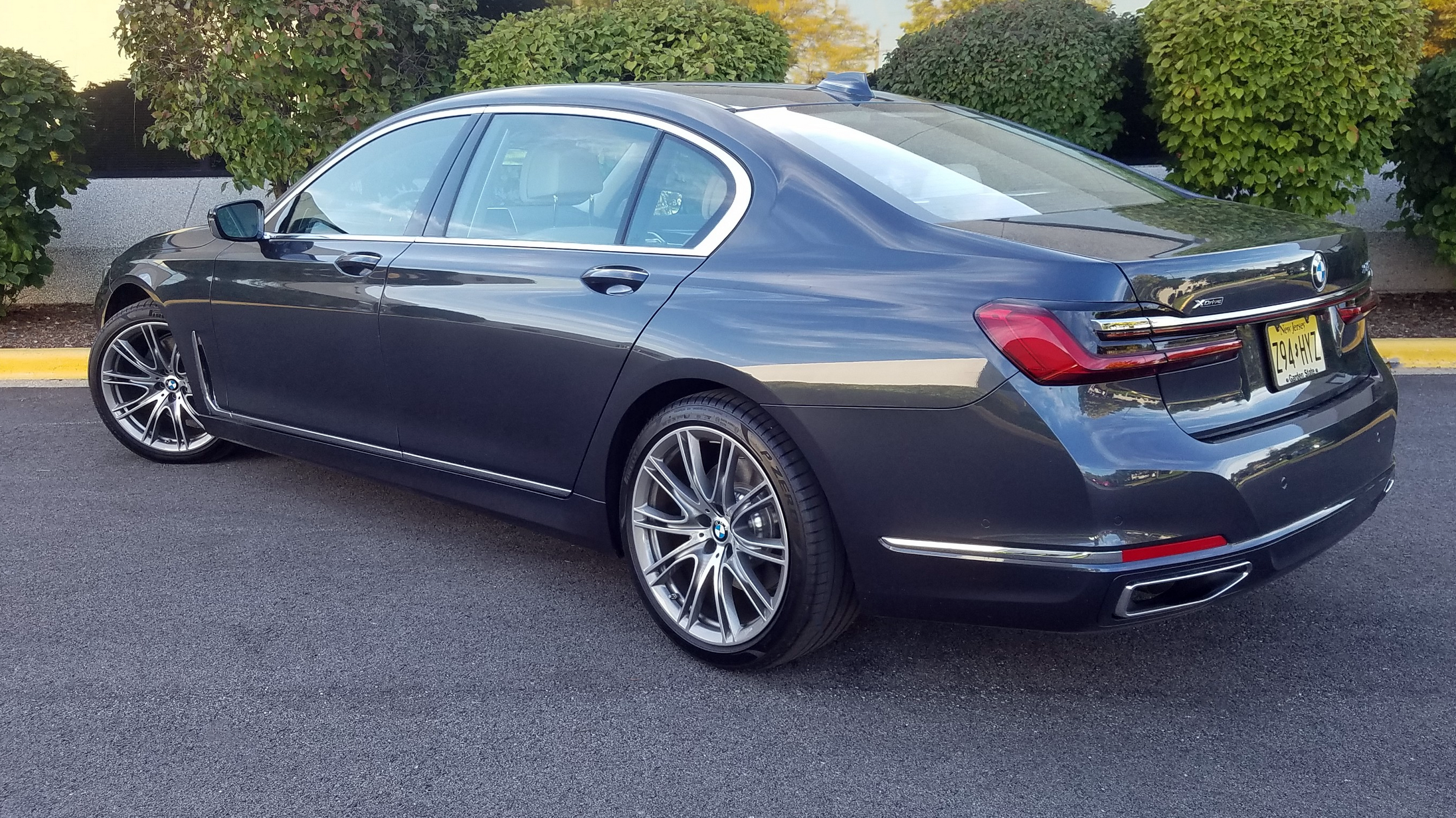 The 2020 7-Series’ ostentatiously upsized grill treatment might turn off some shoppers, but the slightly freshened rear view is less controversial–the new taillights look slimmer and sleeker than before.

In many ways, the 7-Series counters BMW’s “Ultimate Driving Machine” self-image. It’s pretty tough to make an athletically nimble canyon-carver out of a car that’s more than 17 feet long and can weigh in excess of 5100 pounds (as a V12 760i). But if competitive demands call for an “executive-class” sedan, well this is how BMW is going to do it.

For 2020 there is substantial shakeup in the engine roster and new available technology features. The plug-in hybrid 745e ditches a turbocharged 4-cylinder as its gas engine for Bimmer’s choice 3.0-liter inline six, and the 750i adopts the sportier 8-Series’ 523-horse 4.4-liter twin-turbo V8 for a substantial increase in power. While the V12 has been left alone, the turbocharged six that was in the tested 740i with xDrive all-wheel drive has been hiked to 335 horsepower, a gain of 15 from the rating in effect from 2016 to 2019.

A high-class interior is expected in the high-dollar premium large car class, and the 7-Series doesn’t disappoint. None of our editors are particularly fond of the console-mounted infotainment control knob, however.

Working in conjunction with the slick 8-speed automatic transmission, the BMW six pulls strongly far up the tachometer—its maximum 330 lb-ft of torque is in effect from 1500 to 5200 rpm. Better yet, it is quiet and smooth the whole way, and doesn’t feel overmatched in the big car it’s being asked to propel. Weirdly enough, it might even be kind of frugal. This driver saw 26.18 mpg from the test car after covering 159 miles, 40 percent in city conditions. That tops the EPA combined city/highway estimate of 23 mpg, and more than splits the difference between that and the highway-mileage estimate of 28 mpg. (City mileage is projected at 20 mpg.)

Flip-down lighted vanity mirrors are among the coddling features of the 740i’s generously sized back seat.

Selecting the “Sport” driving mode from a menu that also includes “Eco Pro,” “Adaptive,“ “Comfort,” and “Comfort+” tweaks engine operation, effects improvement in steering and handling, firms up the ride, and even has the bolsters in the sides of the seat give the driver a little hug at the ribs as if to say, “In case things get a little wild we’ve got your back.” In fast driving the Comfort settings leave the 740i feeling a little tipsy in lane changes or when rounding bends, but switching out of it sacrifices what is otherwise a serene ride. 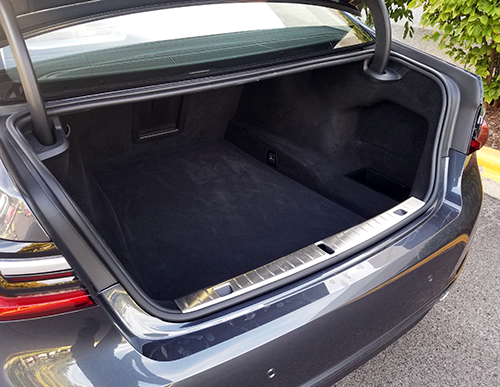 There’s a generous 18.2 cubic feet of volume in the 740i’s nicely finished trunk.

As for new standard technology features, there’s a reorganized seventh-generation iDrive infotainment system, “Live Cockpit Professional ” with a digital gauge cluster, and voice-activated access to the “Connected Package Professional” driving-assistance and remote services. Access to the Connected Package’s bag of tricks including navigation and concierge services supposedly comes at the chummy call of “Hey BMW.” Optional tech advances new to the 7-Series that were on CG’s test car were adaptive LED Laserlight headlights and the minimally autonomous “Extended Traffic Jam Assistant” system. It permits the driver to let go of the steering wheel on limited-access highways and controlled access roads at up to 40 mph—conditions permitting—while the car does the steering, acceleration, and braking. The driver is required to pay attention to the road, and a camera makes sure said pilot is doing just that.

The Live Cockpit cluster brings the roughly pentagonal digital gauges that have been turning up in other BMWs to the 7-Series. The updated iDrive still has the console-mounted central control that’s never fully won over hearts and minds among Consumer Guide editors. Its on-screen displays have a new look and different organization of menus.

Comfortable and luxurious cabin appointments are expected in this class, and they are delivered in the 7-Series. Soft Ivory-White-and-Black Nappa-leather seats and wood trim dressed the test car. The Cold Weather Package added heated front armrests, rear seats, and steering wheel to the standard heated multi-contour front seats with 20-way power adjustment. There’s abundant passenger room throughout, and enough space for 3-abreast seating in back.

Even the 7-Series’ base engine–the 740i’s 335-hp turbocharged 3.0-liter 6-cylinder–supplies smooth, satisfying acceleration. The 20-inch BMW Individual V-spoke wheels on our test vehicle are a $2600 option.

That said, storage space is so-so for such a large car. The glove compartment isn’t bad, but the console box is tiny. At least there’s a small drawer to the left of the steering column. Door pockets aren’t overly big either. Hard-sided pouches are built into the backs of the front seats, and there’s a covered bin in the armrest that pulls down from the center of the rear seat. Front-seat passengers are provided with covered cup holders in a space shared with the wireless charger. Rear cup holders are contained in the central armrest.

Trunk space would be considerable but for intrusive wheel houses that greatly narrow the area, and the center of the floor is slightly lower than the sides, which reduces the loading effectiveness. Rear seats do not fold, a common trait of large sedans.

Everything about the 2020 BMW 7-Series is somewhat bigger than life, including its faults and its credits. And now so is the grille.