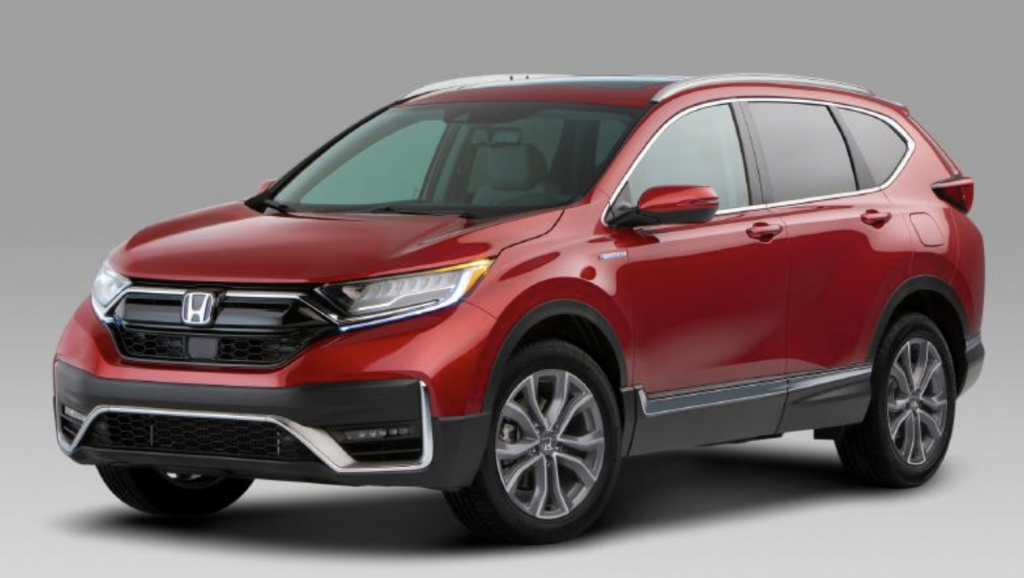 Although there are updates to Honda’s entire CR-V lineup for 2020, the biggest news is that a Hybrid model will be added, due on sale early in 2020. It will be joined in the compact-crossover class by another new hybrid entry, the 2020 Ford Escape (which should be hitting dealerships soon), both adding to the existing roster that includes hybrid versions of the Toyota RAV4, and Kia Niro — which also comes in plug-in hybrid form, the type offered by the Mitsubishi Outlander PHEV and Subaru Crosstrek Hybrid. 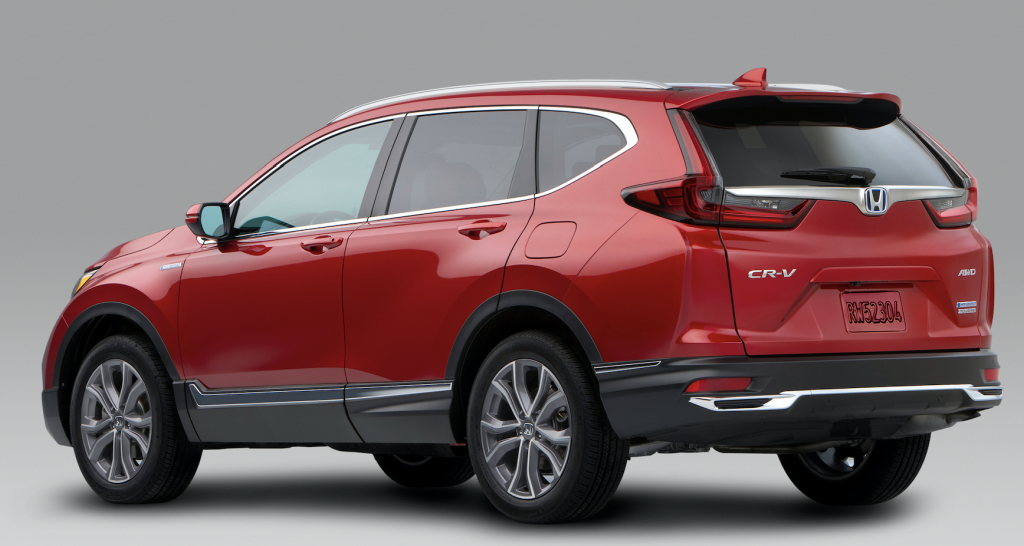 All CR-Vs get dark-tinted taillights for 2020 along with restyled wheels.

The new CR-V Hybrid shares its powertrain and battery with the Accord Hybrid, but it’s the first Honda hybrid to offer all-wheel drive — which is standard. The two-motor hybrid system teams with a 2.0-liter Atkinson-cycle 4-cylinder engine to produce a combined 212 horsepower (up from 190 on other models). And though official EPA fuel-economy figures are not yet out, Honda says the Hybrid should get a city rating about 50 percent higher than that of the gas version, which for 2019 sits at 27 for those with the 1.5-liter turbo and all-wheel drive. If that happens, it would put the city rating at about 40 mpg. Honda also says that the Hybrid is quicker than the gas model, though doesn’t say by how much. 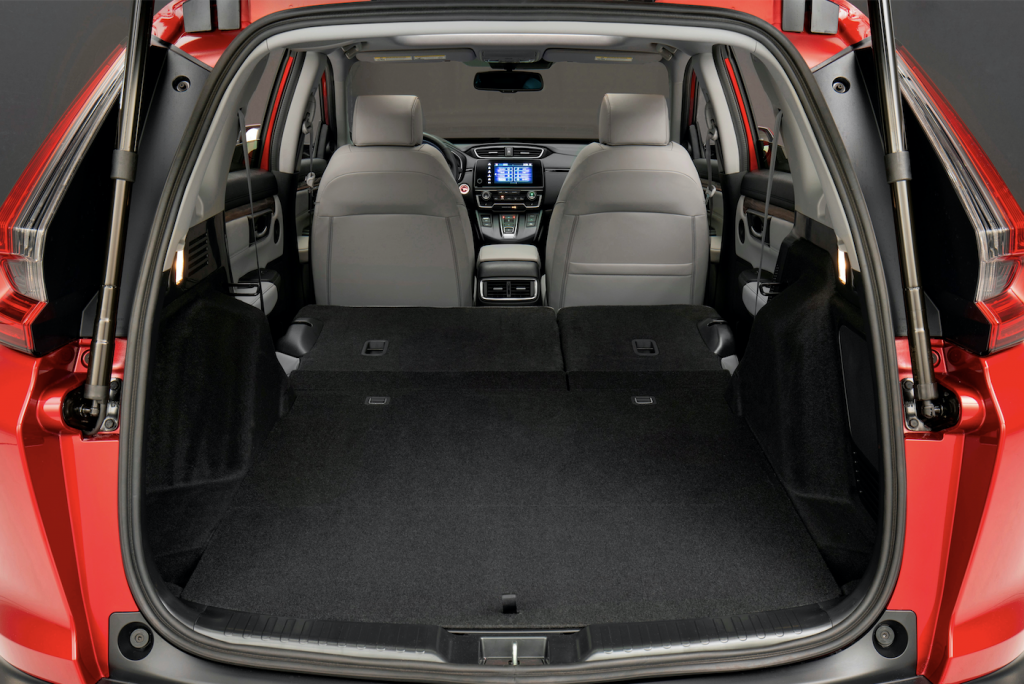 Hybrids lack the under-floor space of gas models (as that’s where the hybrid battery lives), but still offers a long, flat load floor with the rear seat backs folded.

As the hybrid battery resides under the cargo floor in back, it takes up space that allows for a two-tier load floor in other CR-V models. But the Hybrid’s load floor is still flat and level with the folded rear seat backs; it just doesn’t offer the option of having either under-floor space or — by lowering the cargo floor — a taller cargo area.

Other changes to the CR-V for 2020 include a new front-end appearance that gives the vehicle “a more aggressive look” according to Honda, and that all models now come standard with a 190-horsepower 1.5-liter turbocharged engine and Honda’s Safety Sense suite of high-tech safety features, both previously coming in at the “step up” EX trim level. All models also get dark-tinted taillights and new wheel designs, and the top-line Touring adds standard Qi wireless cell-phone charging.

Hybrids are distinguished outside by a blue ring around the Honda grille badge and “Hybrid” badges on the front fenders and liftgate.

Speaking of trim levels, the CR-V Hybrid will be offered in the same four as the gas version: base LX, step-up EX, leather-upholstered EX-L, and line-topping Touring, though each trim level of the Hybrid gets added features its gas counterpart doesn’t. Hybrids will be marked with hybrid badges and a blue ring around the Honda grille badge. Inside, Hybrids also get a push-button gear selector with neighboring buttons to select Econ/Sport/EV Mode. Sport provides better throttle response along with a sportier exhaust note, while EV Mode allows the vehicle to be driven solely on electric power for short distances if the battery has sufficient charge. Also exclusive to Hybrid models is an instrument panel that includes a display that can be set to show power-distribution and other information, along with steering-wheel paddles that let the driver adjust the amount of regenerative braking employed (which determines how quickly the car slows down after lifting off the throttle, but not touching the brakes). 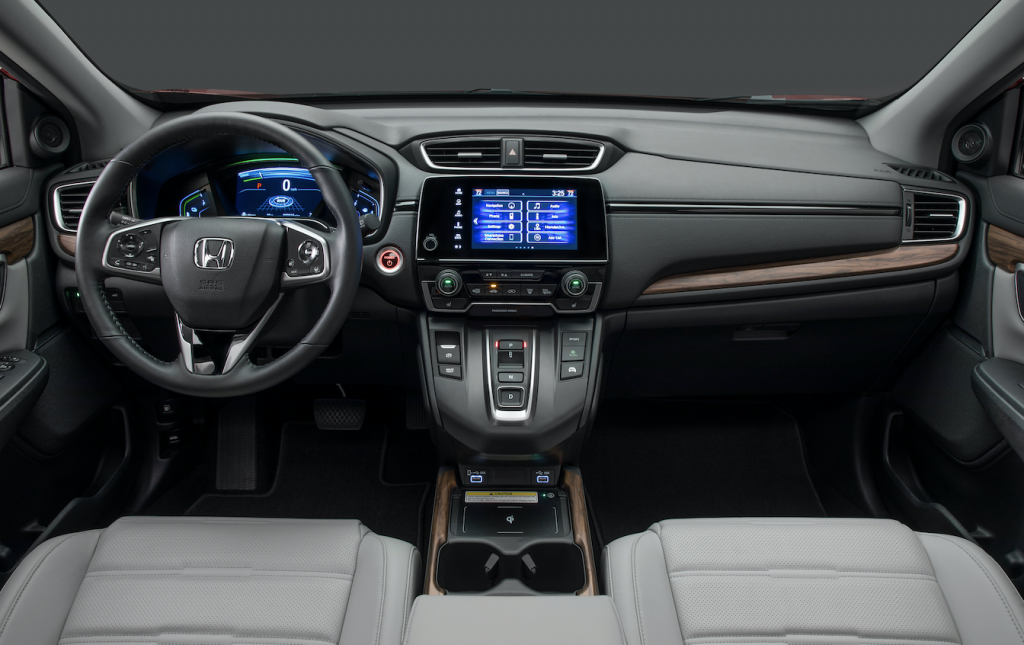 Hybrids get a distinct instrument panel with configurable display along with a push-button transmission-gear selector flanked by Econ/Sport/EV Mode buttons.

As this report is based on a reveal in Detroit, prices won’t be announced until closer to the CR-V’s early-2020 on-sale date, and dynamic impressions will have to await a traditional test drive. But the Hybrid seems like a great addition to a line of compact crossovers that already has a lot going for it.