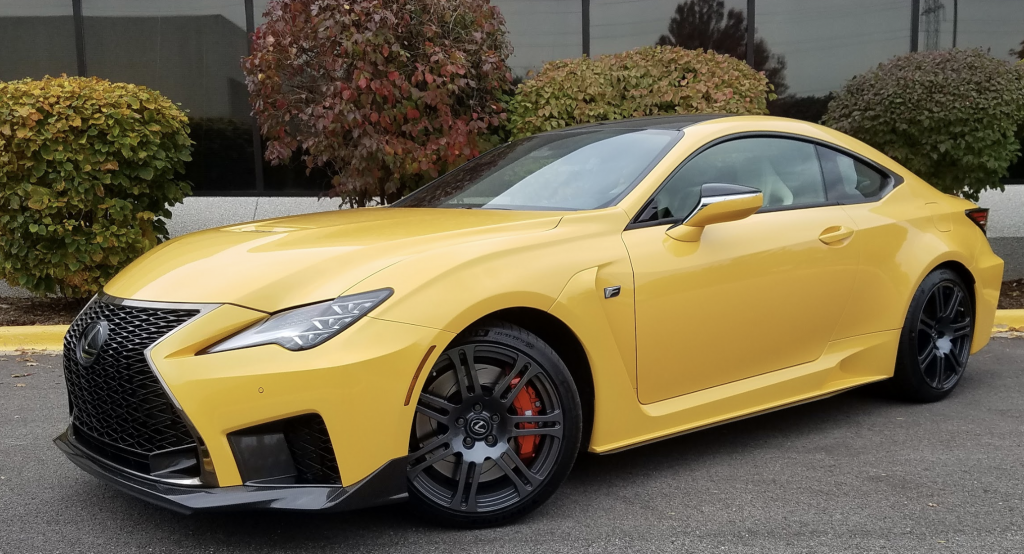 The not so good: Control layout, rear-seat room, cabin storage

You’d think I’d be predisposed to like the Lexus RC, seeing as the company was kind enough to name it after me … or at least, my initials. But I’m not so easily swayed. 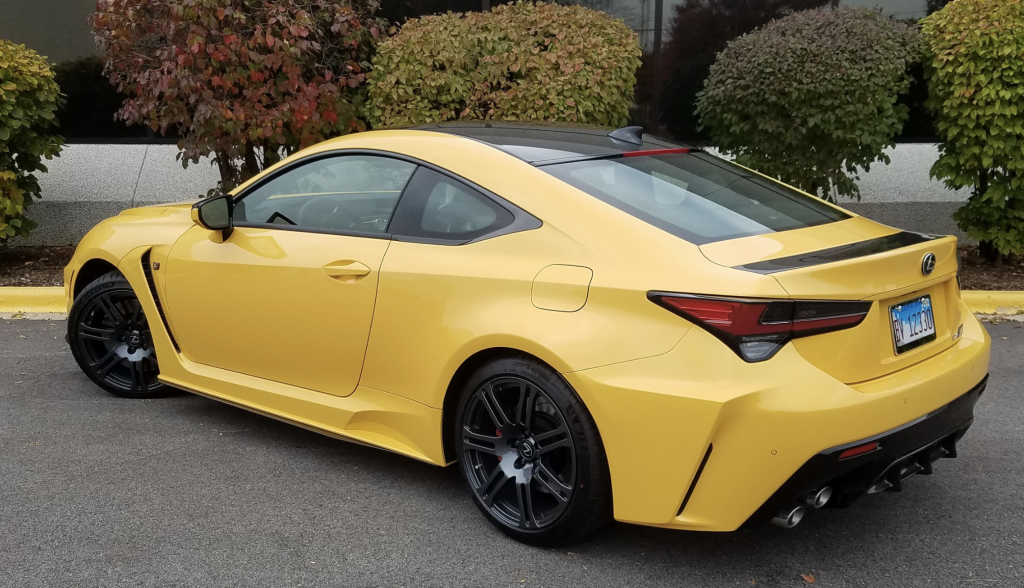 The low-slung RC F certainly looks sharp, but the squatty stance doesn’t do much to ease ingress and egress.

Sure, the RC in potent F guise has a lot of power — always a draw — and few could complain about its handling, or even its expectedly firm but livable ride. Using its standard Launch Control (engaged with the touch of a console button), Lexus says it will complete the 0-60 dash in a hair under 4 seconds. But that’s probably not when it’s 50 degrees out, which is cold for the summer performance tires fitted to the test vehicle. (Cold weather turns summer tires hard and greasy, which is why you really don’t want to keep them on in the winter.) And we always time our 0-60 runs using a more “real life” scenario of a suddenly needed burst of speed (say, a train is bearing down on you), which negates the advantage of pressing a button, holding down the brake, revving the engine, and then releasing the brake, by which time the exit window has long been closed. Yet even without Launch Control and on summer tires in decidedly unsummer-like weather — along with some tire spin and wheel hop — we still averaged a quick 4.52 seconds 0-60.

It’s nicely appointed in the Lexus tradition, but the RC F suffers from the same console-mounted touchpad infotainment interface as its siblings, though this one at least included traditional dash-mounted volume and tuning knobs. The rear seat only carries two, and they best not be linebackers.

A low-slung silhouette means a low-slung front seat, so getting in and out can be a trick, aggravated in tight spaces by the long doors. Even as performance coupes go, accessing the rear seat through the small door portal is tough, and once back there, space is meager; kids and smaller adults may find sufficient headroom (my 5’9 frame presses the limit), but legroom is tight behind even a normal-size front-seater, disappearing behind a tall one. There’s not much interior storage space, either, and the console-mounted touchpad infotainment interface is an aggravating chore to use — though volume and tuning knobs help, and once you get everything set, so do the redundant steering-wheel controls for common adjustments. In a tip-of-the-hat to “old school,” there’s a CD player, but while Apple CarPlay is present, Android Auto is not. Trunk space is hardly huge, but it’s adequate for a couple’s weekend luggage. And while power is certainly strong, transmission kickdown response when the throttle is nailed from speed seemed a bit delayed compared to most other Lexus models we’ve driven, which typically excel in this regard. And though this probably doesn’t matter much to someone spending this kind of money, we averaged just 18.3 mpg in 60 percent highway driving on required premium fuel.

Last year we tested a similar RC F, so we invite you to read that review for more details. For 2020, the car gets a bit more horsepower from its 5.0-liter V8, output jumping from 467 to 472. It also gets the aforementioned Launch Control as standard, along with styling that is updated with new headlights, taillights, and grille.

They save a bit of weight and certainly look neat, but all the carbon-fiber bits included in the Performance Package added a cool $11,400 to the RC F’s bottom line. The speed-sensitive rear spoiler (middle) can also be raised manually.

What our test car also got was a load of options that bulked its $65,775 starting price (including the $1025 destination charge) up to a sobering $89,504 — just shy of the point of entry for its hyper-luxury big brother, the LC. By far the biggest chunk came from the Performance Package, which brought carbon-fiber interior trim, roof, front spoiler, rocker-panel splitters, diffuser, and speed-activated rear spoiler, all of which saves weight, but at what cost? Well, $11,400 to be exact. Also doing its part was the $5350 Premium Package with its heated and ventilated front seats with driver-seat memory, heated steering wheel, blind-spot and rear-cross-path detection, auto-dimming mirror, power tilt/telescopic steering wheel, and rear-seat center console with cupholders. Other biggies were the $1160 Premium Triple-beam LED Headlights and $1250 torque vectoring differential.

Considering their relatively low sales figures, there are a surprising number of entrants in the Premium Sporty/Performance Car category — 20 by our count. What bulks up the segment is that they range in price from about $34,000 for the BMW 2-Series  to more than $100,000 for high-end entries such as the Mercedes-Benz AMG GT, though we draw the line at starting prices north of $120,000, considering those to be “exotics.” Closer in competition to the RC are the Audi A5 coupe, BMW 4-Series coupe, and Infiniti Q60 coupe — all likewise being nominal 4-seaters — with 2-seat rivals being the Jaguar F-Type, Porsche 718 Cayman, and new Chevrolet Corvette and Toyota Supra.

But of course, none of those are named after an automotive journalist ….

You don’t buy a hot-rod V8 sports coupe for its prudent use of nonrenewable fuel sources, and the 2020 RC F certainly won’t make anybody start doing that. Seventy percent of my 169.9-mile test drive was consumed in puttering around in slower city-style driving, which netted just 15.78 mpg, almost—but not quite—up to the modest 16 mpg the EPA figures this car should get in urban operation. Oh, and this one had $11,400 of optional weight-reducing carbon fiber parts applied to it.

The F does, however, allow for a more invigorating experience in the miles between fill-ups. Lexus has made sure to keep the good times rolling with a little extra horsepower and other modifications and additions to the mechanical package. Soon after setting off from work one fine, dry, but cool afternoon I was surprised to get some rear wheel slip when starting off seemingly sensibly from a stop sign on a residential side street, so the power arrives quickly to the standard Michelin Pilot Sport 4S performance tires. (It proved a timely warning when the next morning came up damp and snow-flecked. Like they say in the old noir movies, don’t make any sudden moves and nobody gets hurt.)

Oddly, 65 grand doesn’t automatically buy you luxury-brand features like navigation, heated seats, leather upholstery—or even a blind-spot monitor and rear cross-traffic alert. To be sure, you can get all those things (our $89,000 test car had them), but it’s still a little hard to square.

The RC F backs up its aggressive looks with equally aggressive performance, but as is often the case, it comes at a cost … and that cost goes beyond the sticker price, extending into room and convenience.