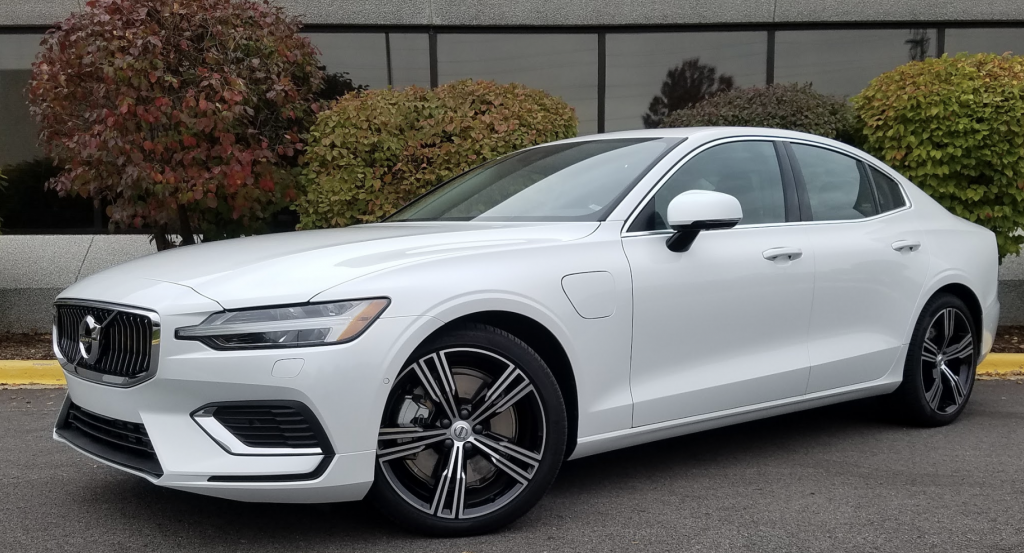 The good: Available complement of comfort, safety, and technology features

The not so good: Complicated touchscreen interface

After testing the more common S60 T6 version of Volvo’s midsize sedan, and then the decidedly more uncommon S60 T8 Polestar plug-in hybrid (a limited-edition effort by Volvo’s performance arm), we finally got a shot at the mainstream plug-in model, the T8 — in this case, dressed in luxury Inscription trim. 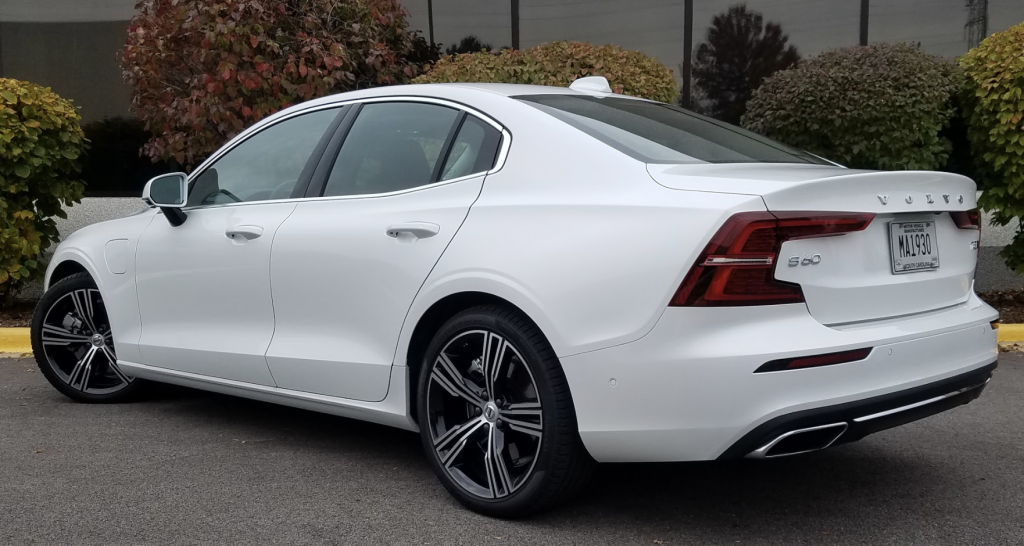 Some of our test T8’s racy looks can be attributed to the $800 19-inch Inscription alloy wheels that replace the standard 18s, but they probably don’t do ride quality — which was a bit on the firm side — any favors.

Jumping from the 316-horsepower all-wheel-drive S60 T6 Inscription to the 400-horsepower all-wheel-drive T8 plug-in costs a sobering $8000. But besides the added 84 horsepower, you also get a whopping 200 more lb-ft of torque (495 vs. 295) and the ability to run a modest ways on just electric power. How much this saves you in fuel costs varies significantly depending on your driving habits (primarily, how often you charge and how far you try to drive until the next one), but in our tests, we averaged 38.2 mpg in the T8 vs. 24.0 in the T6. Note that both the T6 and T8 require premium-grade gas. 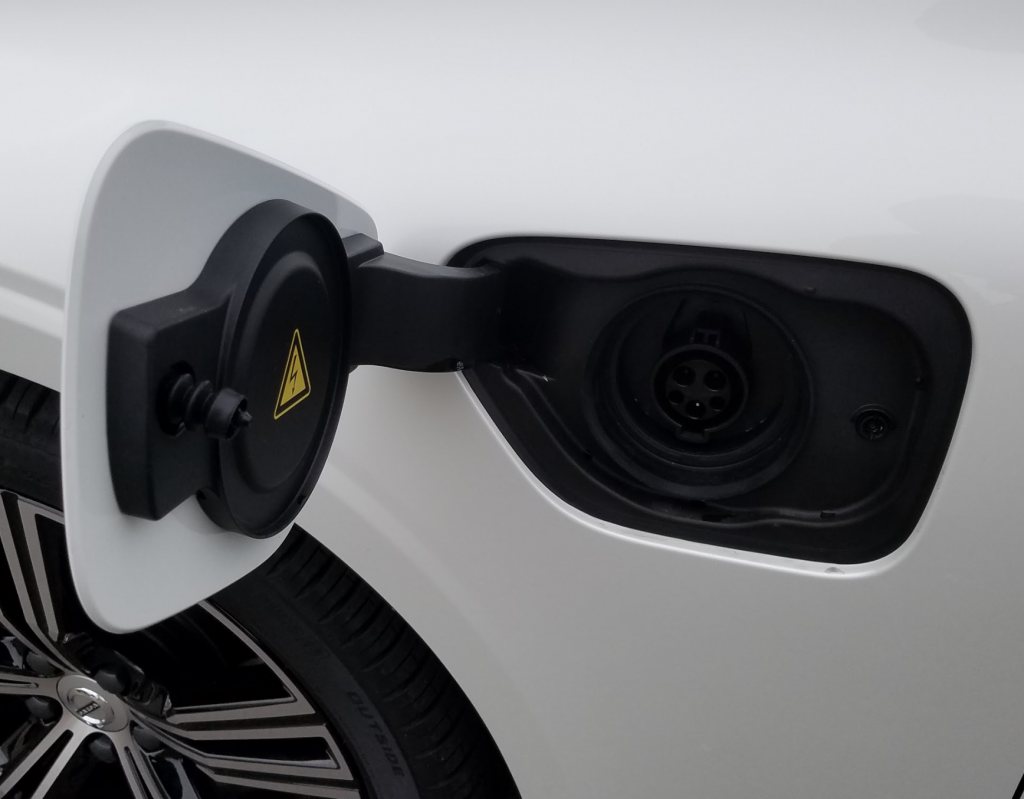 Whether the 2020 Volvo S60 T8’s plug-in capability saves you a little fuel or a lot, the car’s performance is impressive either way.

As might be expected by the power boost, the T8 is noticeably quicker … in fact, downright fast. While we didn’t time it, we did time the similar T8 Polestar (which has just 15 more horsepower), and averaged 4.77 seconds in the 0-60 dash vs. Volvo’s claim of 4.3. So we suspect this “regular” T8 should do 0-60 in less than five seconds, a strong showing for the class. (Though keep in mind the premium-midsize class includes some real hot-rod rivals such as the BMW M5 that have 600-horsepower turbo V8s — and $100,000 price tags — which is why the T8 just earns a “B+” for Power and Performance in our CG Report Card box.) The T8 powertrain also delivers very quick and strong kickdown response when the throttle is floored at speed, another plus.

Although the focus here is pretty clearly on performance over economy, the plug-in-hybrid hardware does improve both. After a full charge, we typically managed to cover about 20 miles of normal driving before the charge was depleted and the gas engine kicked in, after which the car just drove “normally.” So if you cover less than 20 miles a day and recharge every night, you’ll use virtually no gas at all. But most folks will probably see something closer to the excellent 38.2 mpg we averaged in a mix of normal commuting and long highway trips.

The $2200 Luxury Seating Package adds Nappa leather upholstery and a driver seat with extendable seat cushion and backrest massage to the T8’s nicely appointed interior. But the smartphone-like touchscreen complicates what should be simple adjustments — not what you want when also trying to drive.

As our test occurred during cold weather, we noticed one odd problem that cropped up. For those first 20 miles after charging when we were running exclusively on electric power, there seemed to be little in the way of heat output; once the gas engine kicked in, it got warm. We searched through the “virtual” on-screen owners manual for a way to make it work, but after following the stated instructions … still nothing. This may have been an anomaly with our test car, as Volvo says the engine should have kicked on if more heat was called for, but it didn’t.

Good: The satellite station list includes what song is playing on the listed stations. Bad: The touchscreen’s “virtual” owners manual is difficult to use, even more so when you have to figure out what nomenclature the designers deemed appropriate. After being unable to find the AM radio band, we thought “AM radio” was pretty clear, but got no responses. We found out later the T8 doesn’t offer it, but that it can be had by downloading the TuneIn radio app.

The on-screen owners manual wasn’t much help in our search for why we couldn’t find a way to get AM radio stations. We easily found the Satellite and FM bands, but we never did find even a reference to the AM band. We tried plugging “AM radio” into the owners-manual search field, but received a, “Sorry! Your search did not return any matches.” Turns out the T8 doesn’t have AM radio (!), though Volvo says it can be accessed through the TuneIn radio app. As with any owners manual, looking things up is often difficult if you don’t know the proper verbiage (or more precisely, what the manufacturer thinks is the proper verbiage), but having to type in search terms can make the guessing game all that more frustrating.

In other respects, the S60 T8 mirrored our impressions of the S60 T6 and S60 T8 Polestar driven earlier, so we invite you to read those reports for more details. But in brief: 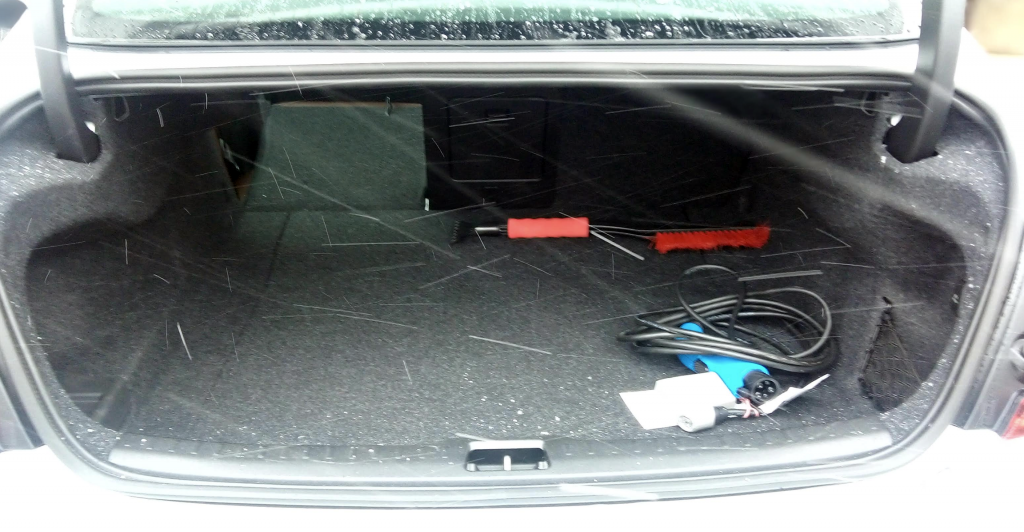 A sedan rarity is that the rear seat backs fold level with the cargo floor, a real help when trying to slide long items forward (and why else would you lower the seat backs?). The trunk is wide at the rear, but the covered lid hinges steal some of that space, and there’s no added storage under the floor. That’s the charging cord (blue handle) that comes with the car, along with the snow brush that doesn’t. (Streaks courtesy of falling snow during our cold-weather test.)

Certainly the S60 — in any form — has its quirks. But compared to other premium-midsize sedans, the T6 versions offer a lot for the money, at least if you can avoid loading them up with some of the more frivolous options offered. And if you look at the T8 in terms of its added performance and potentially significant fuel savings (which if used to its maximum, allows you to “fill up” in the comfort and convenience of your garage), it, too, could be considered somewhat of a bargain.

One of the new crop of plug-in hybrids that use that capability to increase performance along with fuel economy, the Volvo S60 T8 stands as an impressive deal in the premium-midsize class … at least if you can overlook some of the nearly $9000 worth of options fitted to our test vehicle that boosted its price from $56,400 to $64,190.