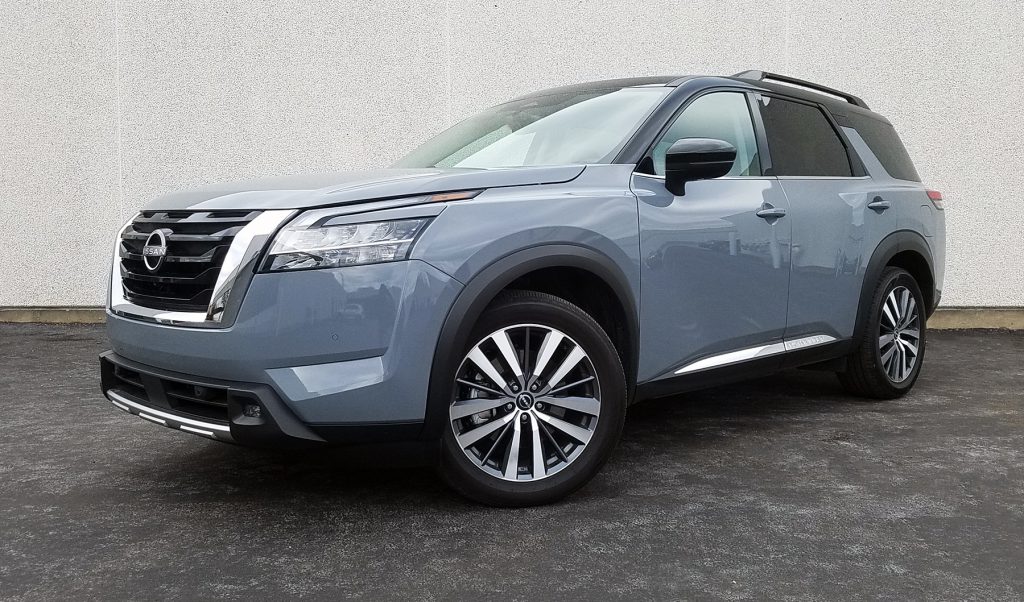 The not so good: Our observed fuel economy fell short of EPA estimates, third-row seat space can be a bit cramped for adults

You would think that something named Pathfinder could find its way back home after wandering off the trail.

After skipping a year, Nissan’s 3-row midsize crossover SUV returns to showrooms as a 2022 model with hunkier exterior styling, an up-to-date interior design, and a raft of new features. Having sampled the pinnacle of the new Pathfinder range—the 4-wheel-drive Platinum—Consumer Guide likes some of those things better than others but still finds the final product a welcome advance. 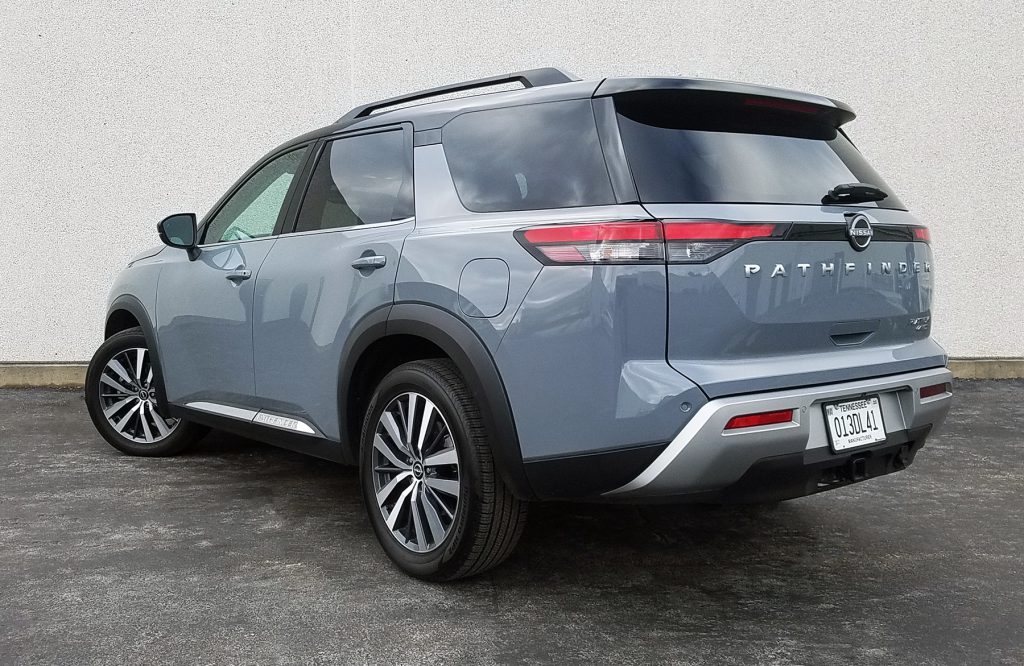 The Nissan Pathfinder is redesigned for 2022, gaining sharper styling, a more contemporary interior design with a host of newly available technology features, and a 9-speed automatic transmission in place of the previous CVT.

As before, the Pathfinder comes in ascending S, SV, SL, and Platinum trim levels, all of which are available with the choice of front- or all-wheel drive. (AWD versions cost $1900 more than their front-wheel kin.) With delivery, CG’s top-line tester started at $49,265. It topped out at $51,395 with a quartet of individual options.

The sole engine choice is a carryover 3.5-liter V6 that makes 284 horsepower and 259 lb-ft of torque. It is, however, newly paired with a 9-speed automatic transmission in place of the previous automatic continuously variable transmission (CVT). Though the CVT in Nissans has given us less to criticize than similar devices found in other makes, the change is welcome as it improves engine flexibility—there’s quicker building of power than with the previous transmission’s slow-but-steady style. As for fuel economy, one of the CVT’s supposed benefits, the new stepped-gear transmission exacts little penalty—at least on paper. The EPA estimates for the AWD Pathfinder’s 9-speed autobox are 20 mpg in the city, 25 mpg on the highway, and 22 combined, which are one mpg short of the CVT’s highway rating but one mpg better in the city. That said, this reviewer recorded just 17.9 mpg in a 74.8-mile test stint in which 63 percent of his driving was in city-type conditions.

The top-line Platinum trim comes standard with a fully digital gauge cluster and a 9-inch infotainment touchscreen. The center console houses Nissan’s unconventional “slider” shift lever, along with the drive-mode selector knob, dual cupholders, a slot for holding a cell phone, and, on Platinum models, a wireless charging pad.

While steering-wheel paddle shifters are now included for the benefit of drivers who may want more hands-on (or fingers-on) control of the available gear ranges, the console “shifter” is a block-like device that works with a back-and-forth action. Also found on some other new Nissans, its unconventional operation grows on a driver pretty quickly. The standard drive mode in all-wheel-drive Pathfinders is accompanied by a wider selection of condition-specific modes including “Mud/Rut,” “Snow,” “Sand,” “Tow,” “Sport,” and “Eco.” Tow mode utilizes Downhill Speed Control that helps reduce the transmission’s tendency to hunt for the “right” gears. Towing capacity remains at 6000 pounds. 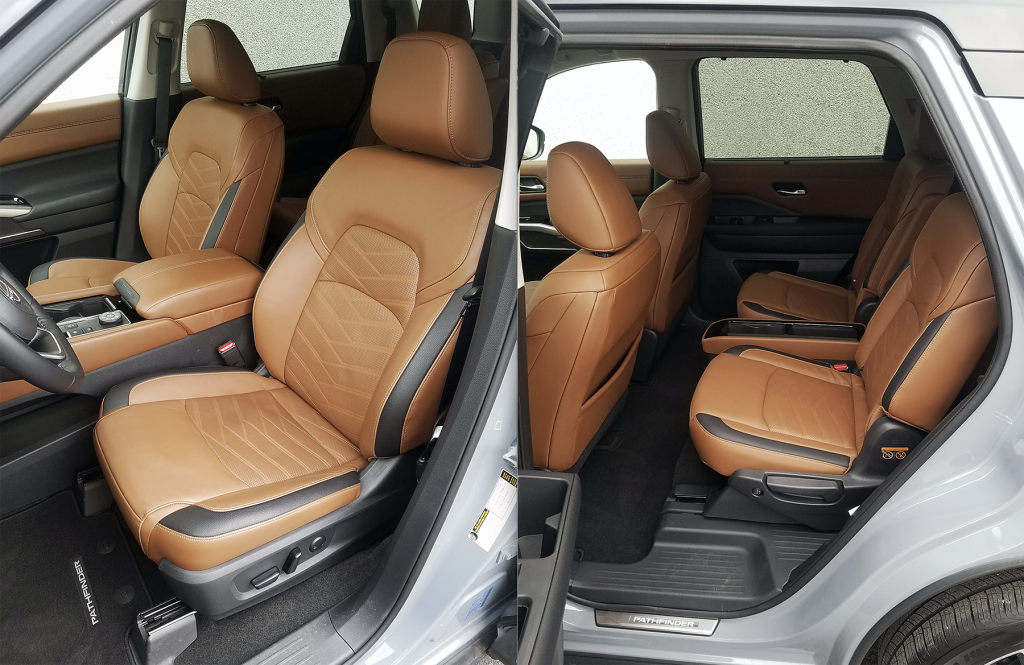 There’s generous space for adults in the Pathfinder’s front and second-row seats. The quilted semi-aniline leather upholstery (in a handsome “Chestnut” color on our test vehicle) is another upgrade of the Platinum trim level.

If appearance and driveline operation make the new ’22 Pathfinder seem a little more like a bona fide SUV again, on-road ride and handling won’t turn off even the most reliable commuters. The comfortable ride—even on the Platinum’s standard 20-inch alloy wheels—doesn’t feel the least bit “trucky,” while a nice level of composure keeps the vehicle from being too soft or flabby over bumps and around corners. Steering effort tightened up a little in Sport mode but not enough to make it a chore to work the helm. 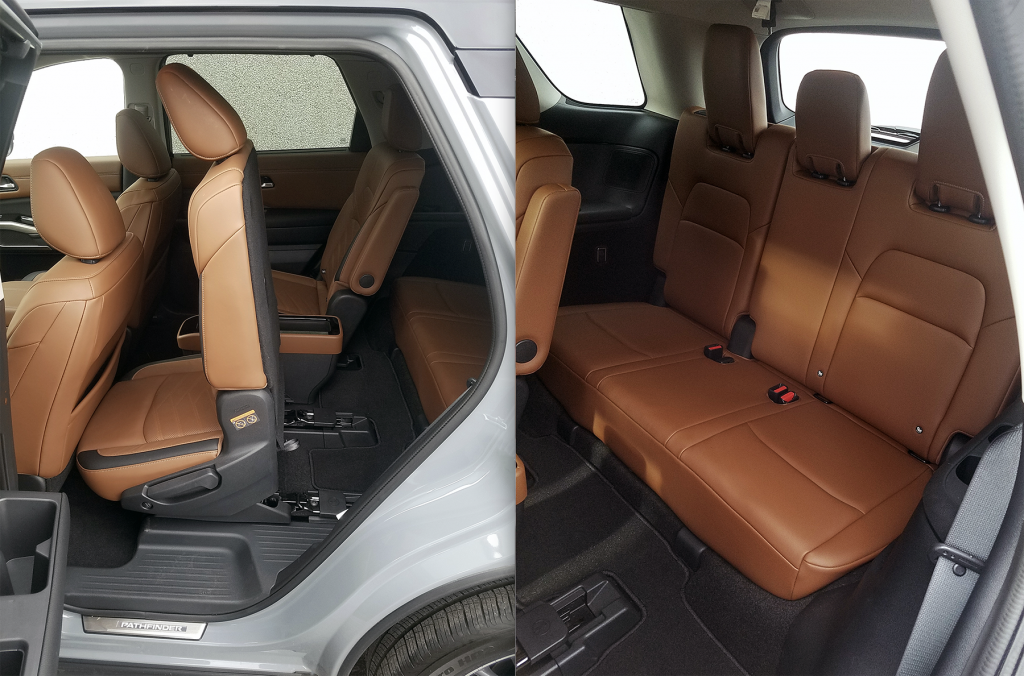 Inside, SLs and Platinums come with a big, new 9-inch touchscreen with a row of buttons to summon audio functions, maps, and apps. Physical volume and tuning knobs help make it easy to set up audio inputs for the 13-speaker Bose audio system that’s standard in the Platinum. The top model also features a digital instrument display. The instrument area is a large 12 inches, with lots of space for information display. We’re glad that the tri-zone climate system has dials for temperature settings, though buttons govern all other tasks. Second-row riders have their own climate panel, albeit with a repetitive-push control for temperature.

There’s 16.6 cubic feet of cargo volume behind the third-row seats, which expands to 80.5 cubic feet with the second- and third-row seats folded–respectable, but not quite as capacious as rivals such as the Kia Telluride and VW Atlas.

As might be expected, the Platinum comes with most of what the Pathfinder has to offer. Standard equipment—some of which is found in lower-tier models—includes things like a panoramic moonroof, full LED exterior lighting, power-adjusted and heated side mirrors, motion-sensing hands-free liftgate, 10-way power driver’s seat and 4-way power front-passenger seat, Apple CarPlay/Android Auto smartphone integration (wireless for CarPlay), satellite radio, Wi-Fi hotspot, wireless charging pad, head-up display, and remote engine start. In Platinums, the ProPILOT Assist, which pairs adaptive-cruise control with automatic lane-centering steering assist (though the driver’s hands must keep contact with the steering wheel) also has “Navi-Link” that uses navigation-system data to “predict” upcoming road features and slow the vehicle accordingly for curves and freeway exits. The safety-technology complement for all ’22 Pathfinders includes automatic emergency braking, blind-spot monitor, rear cross-traffic alert, lane-departure warning, and forward-collision warning.

Though its 9-speed transmission is a new addition, the Pathfinder’s 284-hp 3.5-liter V6 is carried over from the previous-generation model. Platinum models come standard with 20-inch alloy wheels.

Platinum luxury touches include quilted semi-aniline leather upholstery. Front-row seats are heated and ventilated; second-row seats are heated. Drivers grip a heated, leather-wrapped steering wheel. Passengers enjoy the feel of soft surfaces on door tops and centers and a little on the console, though the underlying padding is thin. Platinums are 7-passenger vehicles with captain’s chairs and a center console in the second row. First- and second-row seats provide good support, and the latter recline quite far. Access to the third row isn’t easy, and for adults (two at most) there’s only enough headroom and knee room to tolerate for a while. Plus, feet get hung up in the tracks for the middle-row seats. Kids—up to three—might have fewer space problems. The seat back is fairly upright.

The new Pathfinder gets a bolder, more angular look all-around compared to its predecessor.

A “purse porch” under the center console augments modest glove and console boxes. Front doors have pockets with bottle holders; rear-door pockets are little more than bottle holders. Pouches are on the backs of the front seats. Exposed cup holders reside in the front- and middle-row consoles, and in the sidewalls next to the third-row seat. There’s limited cargo space behind the third-row seats but a good-sized bin under the floor is a bonus. Rear seat folds flush with the cargo floor once headrests are folded via pulls in their backs. Dropping the second-row seats extends the cargo area, though you’ll have to work around the removable console.

The Pathfinder has found its way back to the Nissan SUV lineup with enough improvements to be a competitive draw for shoppers’ attention.

Though it’s not a “from the ground up” redesign, the 2022 Nissan Pathfinder delivers enough new and improved features to make it a worthwhile alternative to its three-row class rivals. 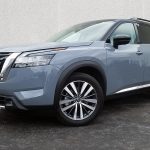 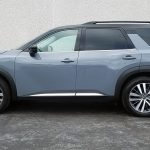 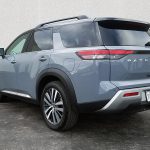 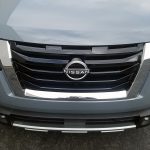 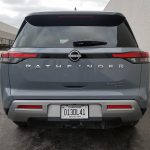 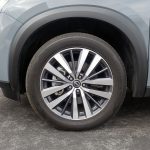 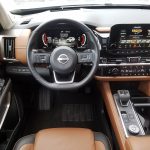 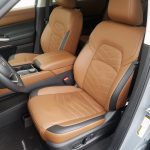 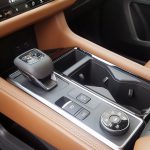 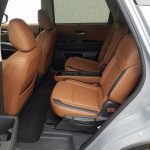 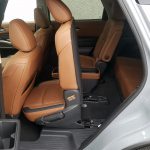 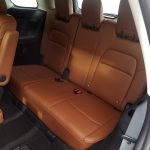 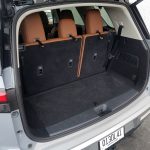 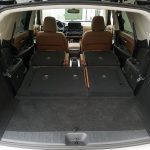 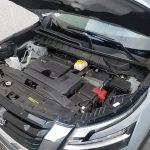