Rolling Billboards: The Scourge of Suburbia

This truck is fairly typical of the rolling-billboard breed. As the tires appear properly inflated and the rear glass clean, we can only assume that this van moves from time to time. One of suburbia’s many rolling billboards.

The operators of businesses located in shopping centers and plazas often find themselves handcuffed when it comes to advertising. Sure, they’re free to do what they want online and in the Yellow Pages, but out in front of the shop? Not so much.

This may be especially true in the Chicago suburb I call home, but it seems that more and more the lethal combination of mall signage “continuity” rules and local zoning regulations are leaving businesses with just a tiny, nondescript shingle above the shop, and perhaps a small mention on some mega sign at the center’s entrance.

However, enterprising shopkeepers have begun working around these restrictive policies—for better or worse. As the rules mostly apply to the creation and maintenance of “permanent” signage, signs and banners are ending up being affixed to, or painted onto, rolling signs—you know, cars and trucks.

In theory, since these cars and trucks are technically not permanent, they are in compliance with the rules. But, and you’ll see this below, the actual mobility of some of these vehicular sandwich boards is open to debate. I present here six examples now deployed within a couple miles of my home, one of which certainly hasn’t moved in a long while. 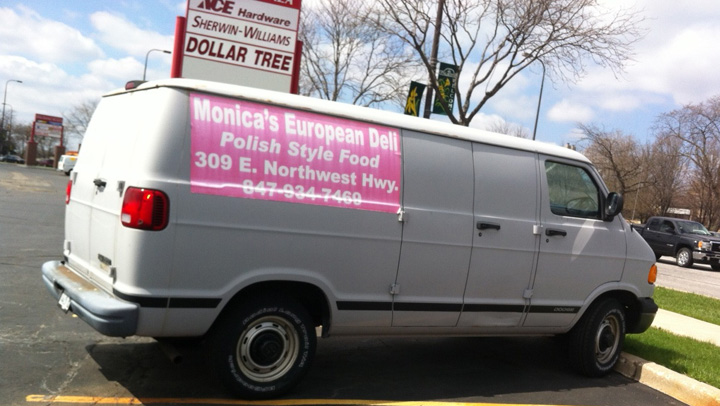 Located in the prestigious shadow of a Dollar Tree sign, this van is starting to look a little ragged. I can’t say if this truck actually runs, but the ink on the sign itself seems to have. 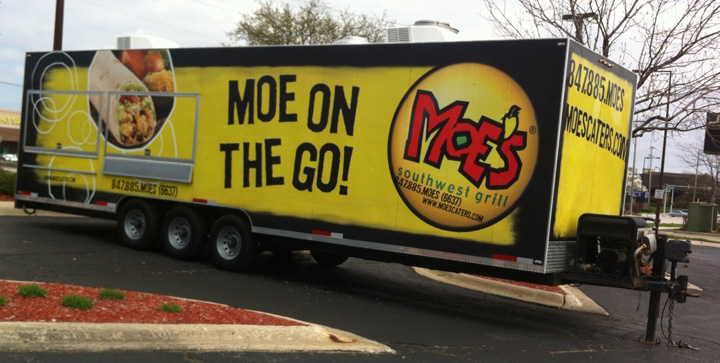 This huge trailer is clearly in operating condition and ready to serve crowds in some festival setting. However, how the plaza management was tricked into allowing this monstrous rig to be parked streetside for extended periods of time we will never know. 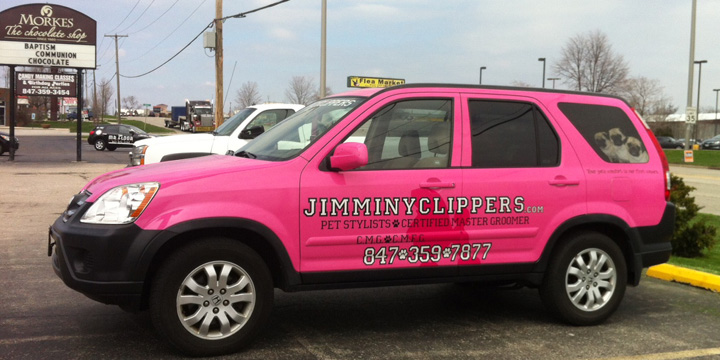 Not only is this particular rolling sign operable, it seemingly splits its time between storefront and the owner’s driveway. The hot pink might be tough to live with for some folks, but this Honda CR-V is likely calling all sorts of attention to the shop. 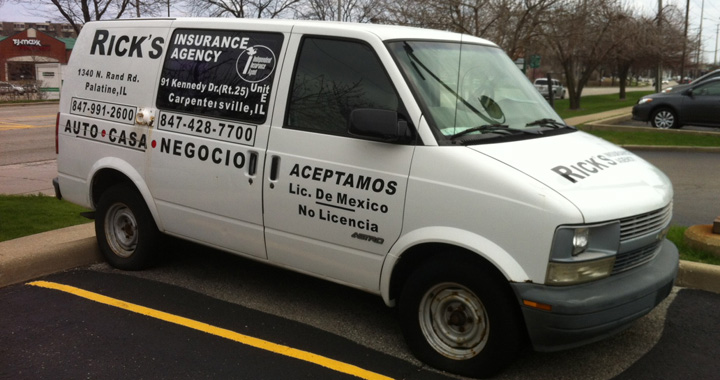 Rick’s adver-van looks clean enough, but seeing as the lot was literally blacktopped around it, we can assume it’s no longer traveling under its own power. Hard to say what an insurance agency would need a delivery van for, anyway. 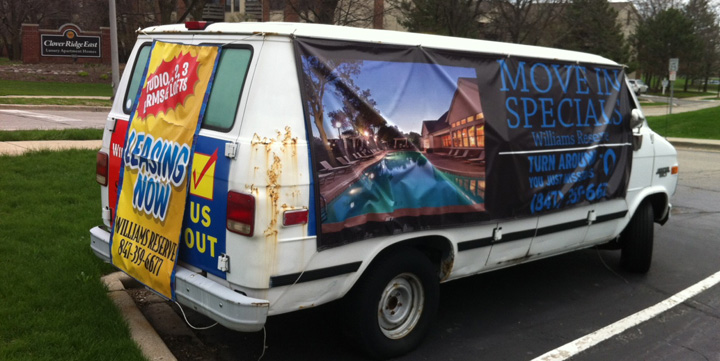 If, indeed, first impressions matter, apartment seekers likely pass on this complex like leeches pass on salt. While sliding the side sign back a little might have helped cover the rust, who’s to say doing so wouldn’t have revealed rust already under cover?

Check out The Cars of Walmart, Part 3