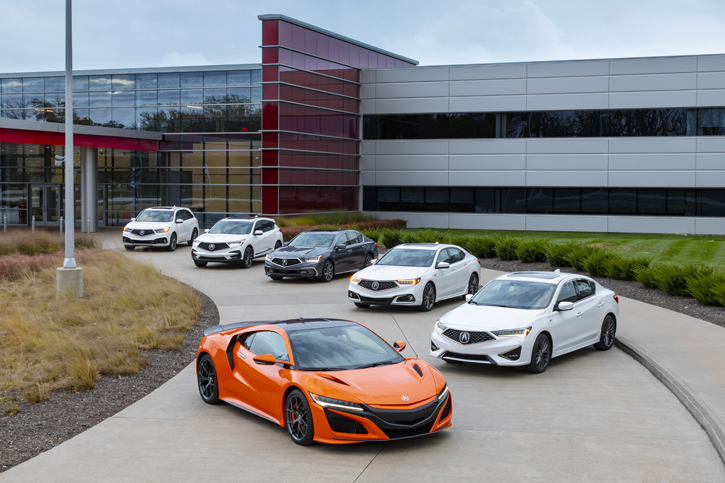 Acura’s product lineup has been undergoing an exterior-design transformation over the last few years, and the styling makeover has reached full fruition with the 2019 model year. As promised, the brand’s “Diamond Pentagon” grill treatment, a look that debuted on the Acura Precision concept car of 2016, has now proliferated across every Acura model. We recently attended the 2019 Acura full-line media preview, where we got some seat time in the refreshed ILX compact and a couple of hot laps in the NSX supercar, as well as an overview of the rest of the Acura lineup. Check out what’s new: 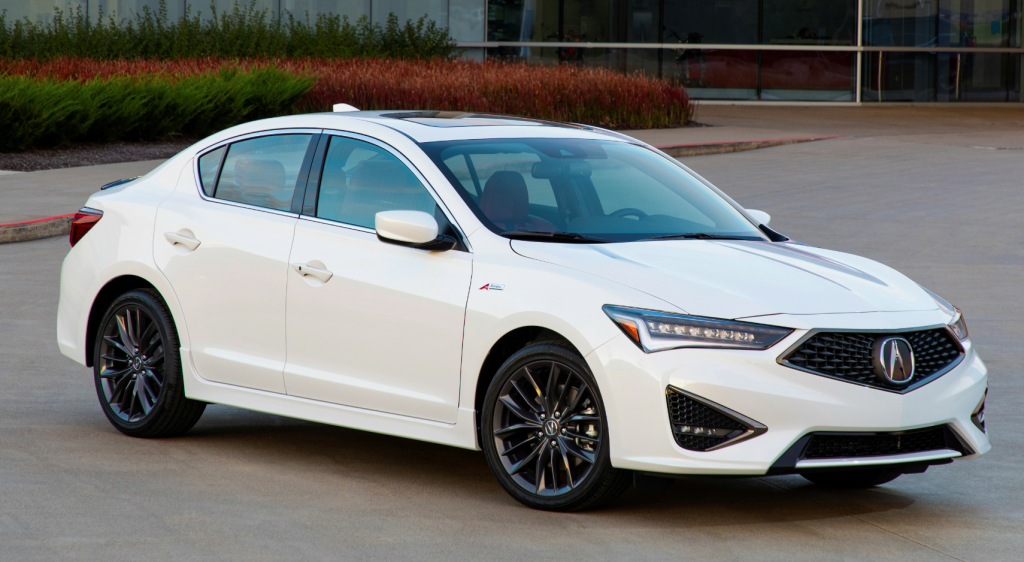 Acura’s entry-level vehicle undergoes a freshening for 2019 that nets it a fresh look and a few new features. An exterior styling facelift brings the Diamond Pentagon grille (the ILX is the last vehicle in Acura’s regular lineup to receive this design motif), as well as 7-element Jewel Eye LED headlights and a sharper, more sculpted look for the hood and front fenders. The rear-end look is new too, thanks to updates such as restyled LED taillights, a rear spoiler, and a new rear fascia that now houses the license plate (which was previously on the trunk lid). 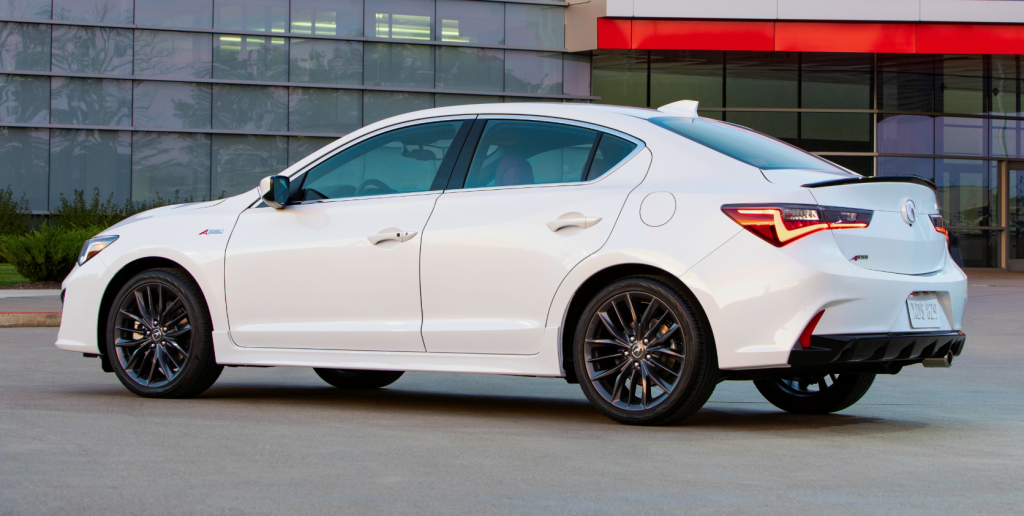 The interior sees detail updates such as a machine-finished engine-start/stop button, reshaped front and rear seats (the driver’s seat gets a 2-way power lumbar control), and silver-finished dash trim with a chrome insert. The available dual-screen infotainment interface has been enhanced with new graphics and Apple CarPlay and Android Auto functionality, and Acura says its response times are quicker too. Plus, the AcuraWatch suite of active-safety equipment, which consists of forward collision warning with automatic emergency braking, lane departure warning, lane keep assist, road departure mitigation, and adaptive cruise control, is now standard on all ILXs.

We took an ILX A-Spec for a short drive during the preview program. The numerous revisions for 2019 certainly help, but the ILX continues to feel like a “junior” member of the premium compact car class. Compared to slightly larger rivals such as the Audi A4 and BMW 3-Series, the ILX isn’t as prestigious or luxurious. Overall noise levels are a bit louder, and the cabin doesn’t feel quite as modern or high-end. 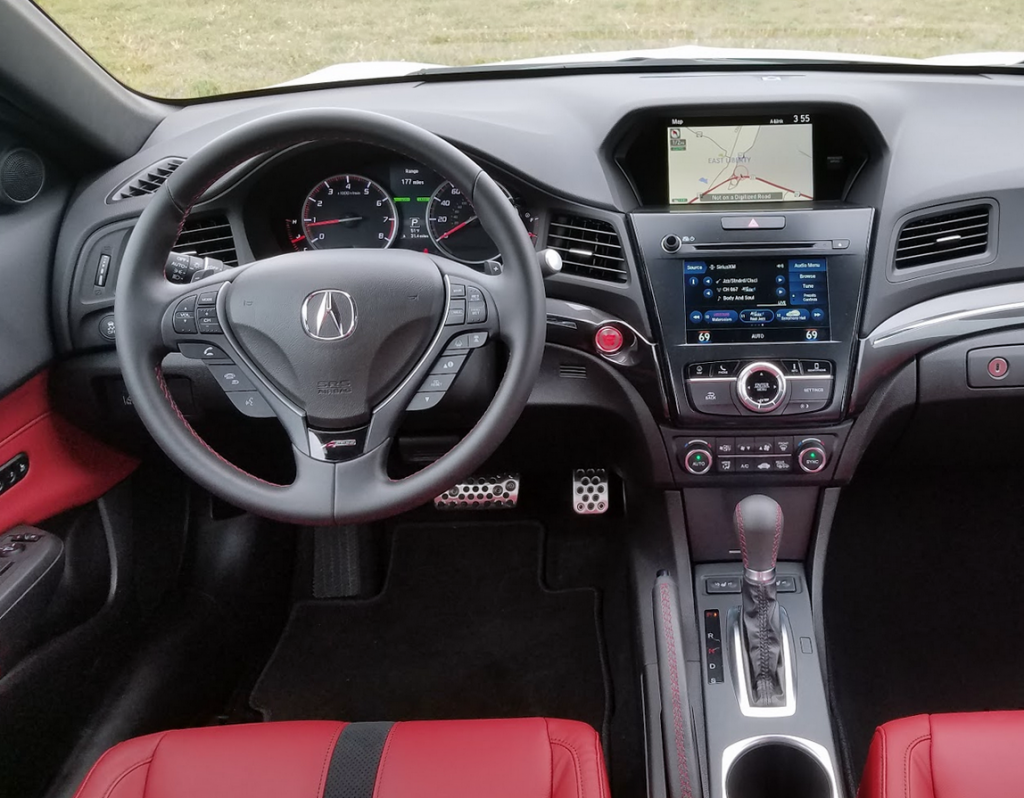 The ILX is based on the previous-generation Honda Civic, and those relatively humble origins often show through the upscale Acura trimmings. As before, the ILX’s sole engine is a 201-horsepower 2.4-liter 4-cylinder paired with an 8-speed dual-clutch automatic transmission. This engine provides respectably quick acceleration, but it’s also noticeably coarser-sounding in around-town driving than the powerplants in most class competitors.

However, for premium-brand shoppers who might be graduating from a mainstream-brand sporty compact, the ILX’s rough edges might be part of its appeal. The engine note that can sound a bit unrefined in normal driving turns into a surprisingly invigorating growl at the upper limits of its RPM range, and the ILX’s front-drive handling characteristics will be refreshingly familiar to a driver coming out of a “hot-hatch” compact. You can think of the Acura ILX A-Spec as a Honda Civic Si that’s been dressed up in its Sunday best for a special occasion; it’s wearing grown-up duds as best as it can, but there’s still a bit of backwards-baseball-cap attitude underneath.

The ILX’s primary advantage is its affordable pricing, and as noted above, it gets significantly more affordable for 2019. Comparably equipped, the ILX runs at least $5K less than its premium-brand European rivals. 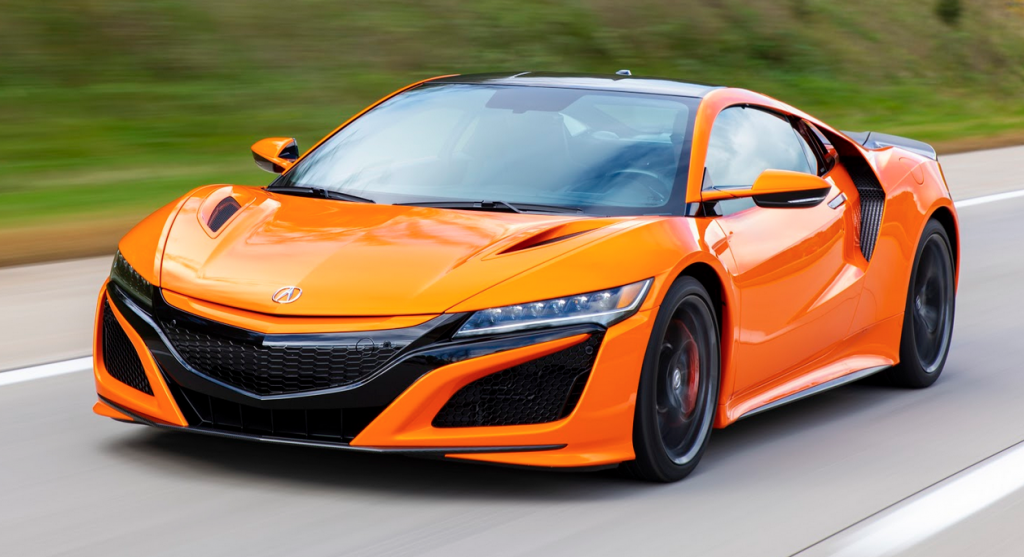 The rebirth of Acura’s two-seat, mid-engine supercar launched as a 2016 model—almost exactly 25 years after the original NSX went on sale. For 2019, the NSX gets a number of cosmetic updates, and some noteworthy chassis enhancements.

The standard factory-issue tires have been upgraded to the Continental SportContact 6—these tires were developed exclusively for the NSX, and replace the Conti SportContact 5P rubber used previously. The new tires offer superior grip, and they enabled Acura engineers to make a host of suspension and drivetrain adjustments to take advantage. The front and rear stabilizer bars are respectively 26 percent and 19 percent stiffer, and software tuning has been revised for the Super-Handling All-Wheel Drive system (SH-AWD), electronic power steering, adaptive damper system, and vehicle stability assist.

We got a taste of the 2019 NSX’s formidable capabilities on a short road-course testing track at the Transportation Research Center proving-grounds facility in East Liberty, Ohio, and we also sampled the vertigo-inducing launch-control feature.

The NSX’s twin-turbo 3.6-liter V6 is paired with a 9-speed dual-clutch transmission and three electric motors (two in the front, one at the rear). The total horsepower output is 573, and torque output is 476 lb-ft. The launch-control feature is fiendishly simple. Select the proper drive mode, then apply the brakes with your left foot and floor the throttle pedal with your right foot (the software automatically holds the engine to 2000 rpm). Lift your foot off the brake pedal, and, if you’re like me, you’ll involuntarily let out a strange guttural yelp as the car rockets forward, pinning you back in your seat and making your face feel a bit tingly. The 0-60-mph time is a scant 2.9 seconds.

Unfortunately, the NSX’s cockpit is cramped enough that my 6’6” frame can’t fit comfortably when I am wearing a helmet, so that sort of hemmed in my on-track excursions. Still, the NSX exhibits phenomenal grip, thanks in part to the torque-vectoring all-wheel-drive system, and the acceleration is every bit as ferocious. Despite the high-tech hybrid powertrain, the visceral appeal is intense… the turbos and electric motors work together with impressive seamlessness to provide seemingly unlimited thrust on demand. 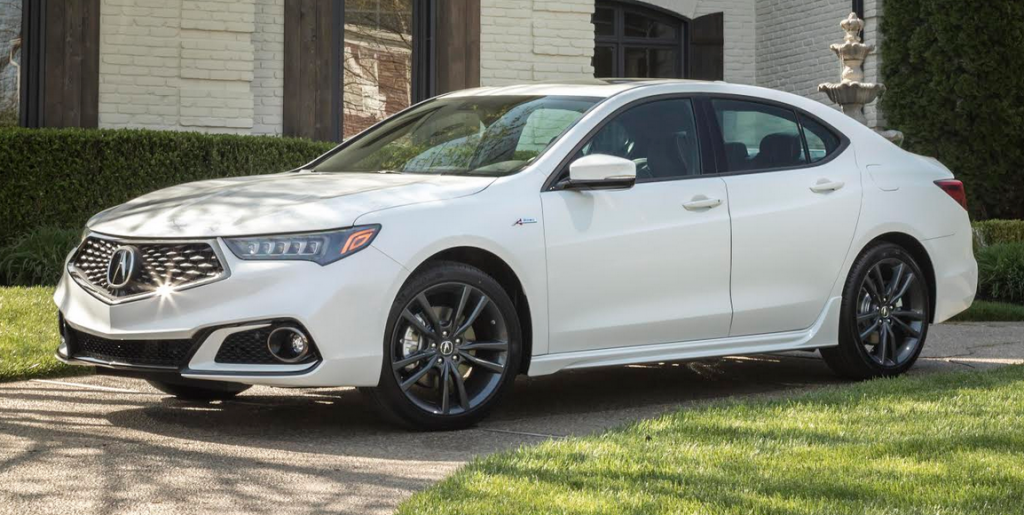 After undergoing a substantial freshening for 2018, the TLX sees just a couple changes of note this year. Availability of the sporty A-Spec package is expanded to 4-cylinder-powered models (it was previously available only with the V6), and 19-inch wheels—a size previously exclusive to the A-Spec—are now offered on V6-powered Technology and Advance models.

After a refresh for 2018 that netted it the Diamond Pentagon grille and a 10-speed automatic transmission in place of the previous 8-speed, the Acura RLX is carried over with no changes of note for 2019. 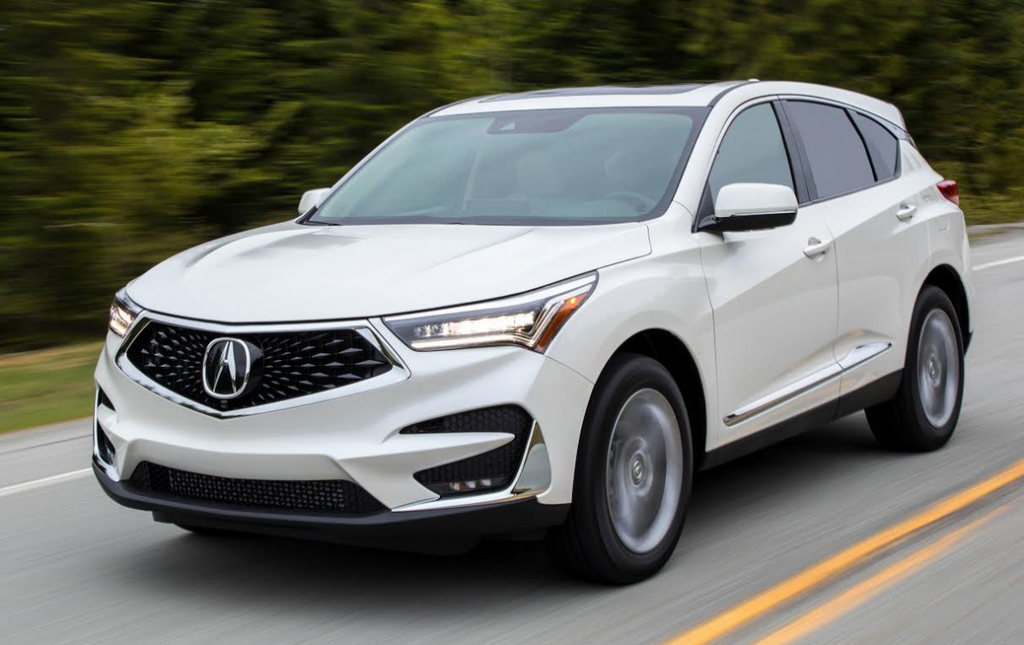 Acura’s compact SUV is completely redesigned for 2019; you can check out our coverage of its auto-show debut here  and our first test drive of an A-Spec model here. 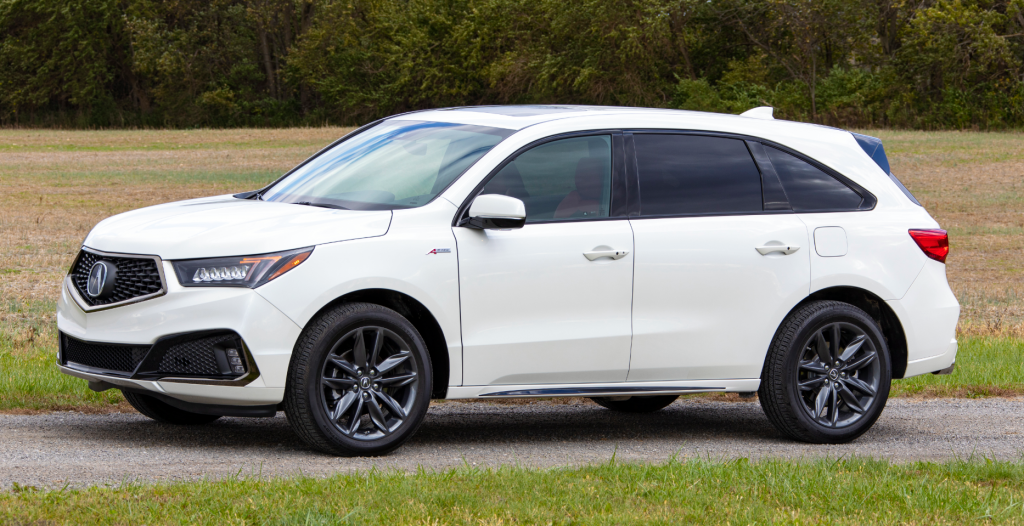 The MDX joins the A-Spec club for 2019, as Acura’s sport appearance package is now available on its three-row midsize SUV. The A-Spec trim is offered only on all-wheel drive MDXs; it includes exclusive 20-inch wheels on low-profile tires, a thicker-rimmed steering wheel with paddle shifters, and a host of sporty styling touches inside and out.

The MDX also receives a number of refinements for 2019. Acura says the 9-speed automatic transmission is updated for a smoother feel in normal driving, and the auto stop/start feature now has a more natural, seamless feel. Interior upgrades include several new trim accents, standard 4-way power lumbar adjustments for the front seats, and a revised second-row seat configuration on Technology and Entertainment models. Advance-package models now offer Acura’s Active Damper System adjustable suspension, which was previously available only on the Sport Hybrid.