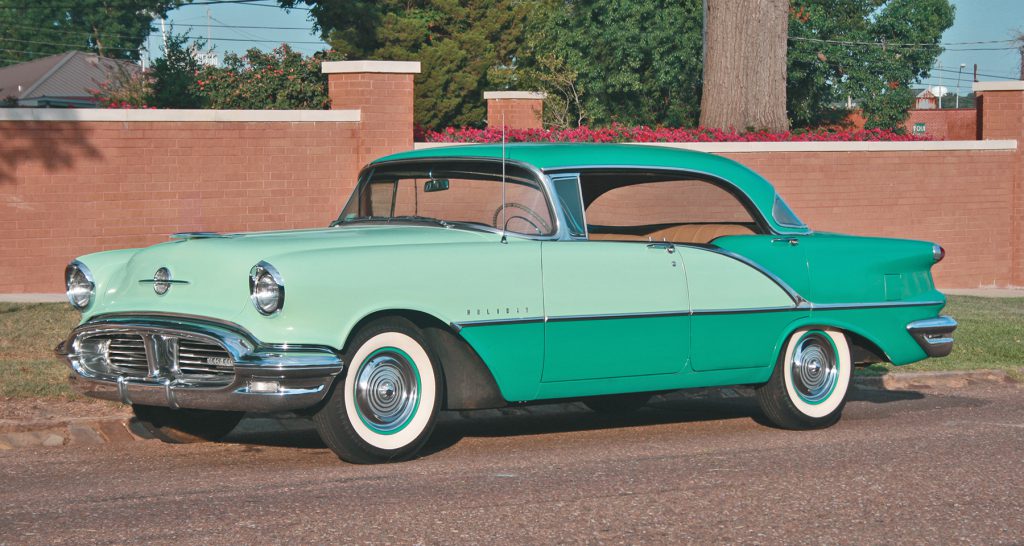 Note: The following story was excerpted from the December 2011 issue of Collectible Automobile magazine

It’s hard to believe that the car on these pages is original from the tires up. This 1956 Oldsmobile Super 88 Holiday four-door hardtop was purchased by an elderly lady in Kentucky and used by her housekeeper for shopping. A nephew inherited the car, but didn’t drive it—although he did start the engine occasionally. The nephew sold the Olds to a collector of original cars who later sold it to current owner Jimmy Blackburn of Texarkana, Texas. 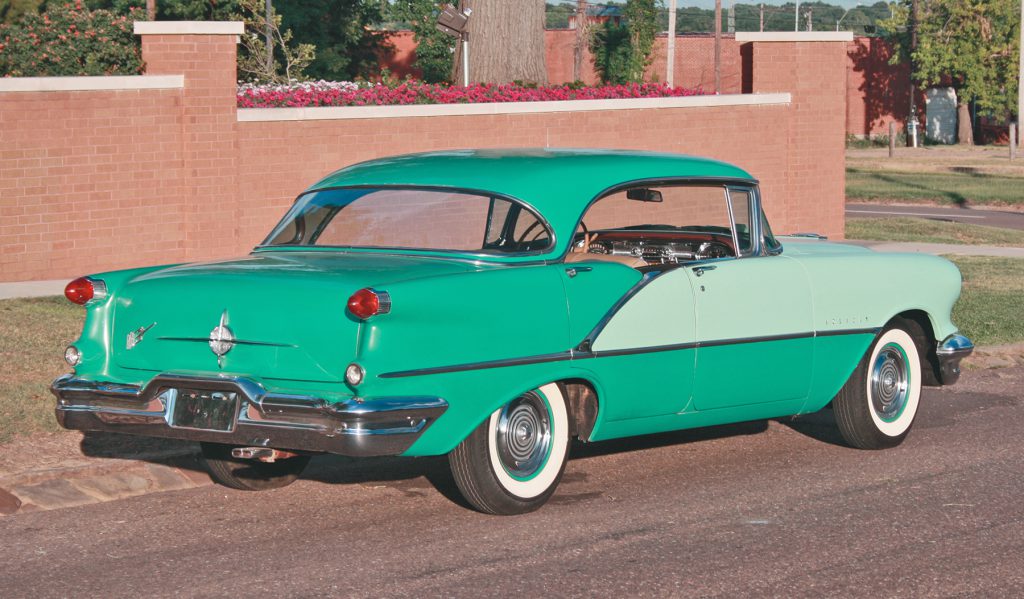 Low mileage is one of the secrets of the Olds’s eternally young look: There are only 6700 miles on the car, which has required no mechanical or cosmetic work. Even the tires—again original—are in surprisingly good condition. “It drives like a dream,” says Blackburn, who occasionally drives it in town.

When new, there was no need to baby the Olds Super 88. Science and Mechanics magazine clocked 0-60 mph in 10.2 seconds and stated that the Olds “clobbers the 11.4+ seconds averaged by the seven 1956 test cars we have tested so far this year.” In a Q & A format for its ’56 buyer’s guide, Motor Trend praised it this way: “Q. Does it [Oldsmobile] have good performance? A. Almost a superfluous question—it’s an Olds, and the already-hot Rocket engine has been boosted in horsepower. A real delight for the would-be dragster. . . .” 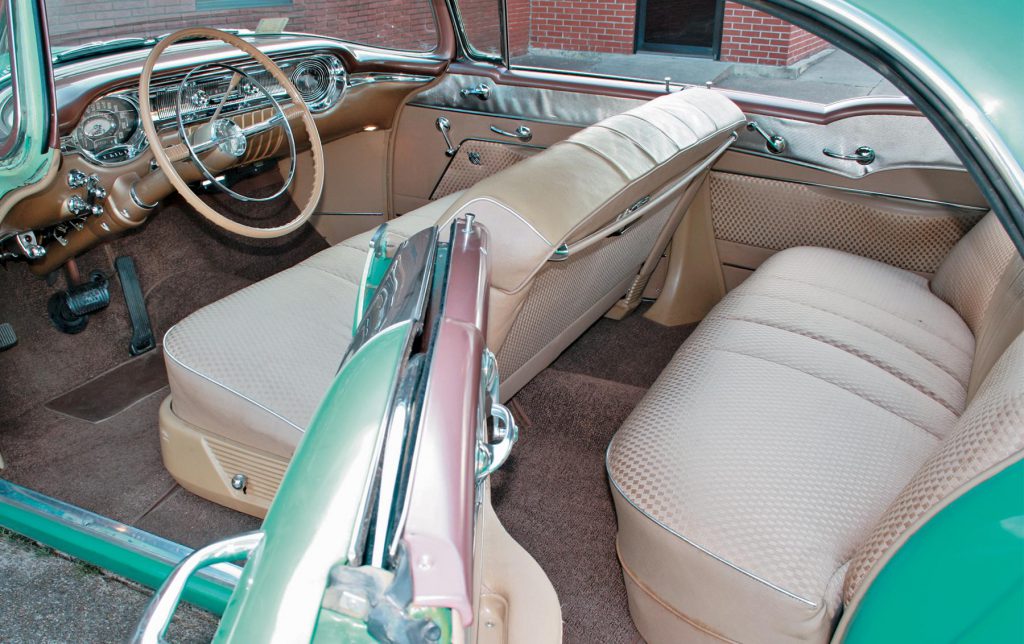 The boost in horsepower was the result of an increase in the compression ratio from 1955’s 8.5:1 to 9.5:1 for ’56. The horsepower rating of Oldsmobile’s ohv Rocket V-8 engine used in the Super 88 jumped from 202 to 240. Top speed was estimated to be 110 to 113 mph. The Rocket V8 of our featured car is mated to a new-for-’56 Jetaway Hydra-Matic Drive automatic transmission. For $15 more than Olds’s base Hydra-Matic, Jetaway added a second fluid coupling for smoother operation as well as a “Park” position in the quadrant that eliminated the need to apply the parking brake. However, if the parking brake was applied, there was a convenient release knob on the lower edge of the dash with a red warning light. 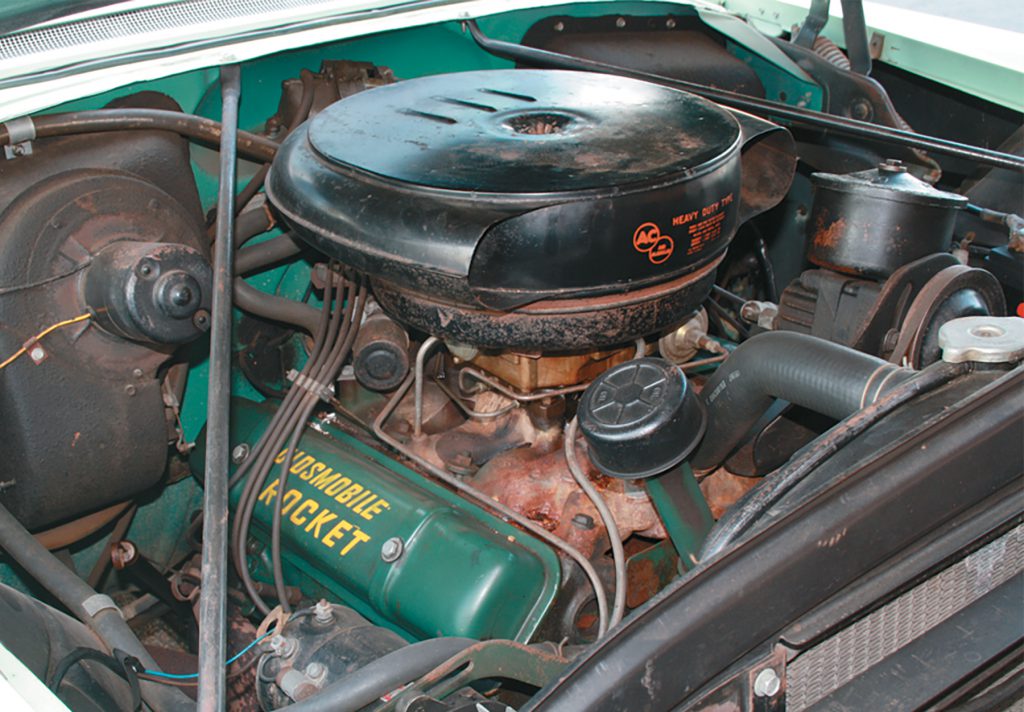 Just as Olds had massaged the powertrain for ’56, it also revised styling with a new concave grille. The Holiday two-door hardtop had been joined by a four-door Holiday in ’55. By ’56, the hardtop sedan was the most popular body style in the Super 88 range with 61,192 sold at a base price of $2881. 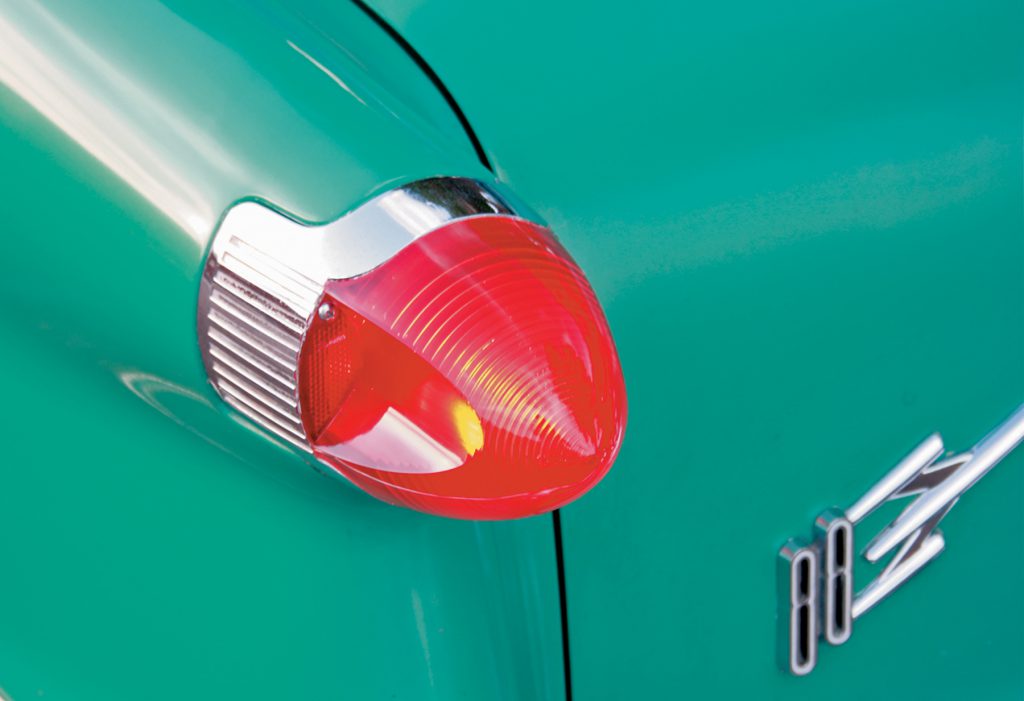 The Super 88 was in the middle of Oldsmobile’s three-series lineup. The base 88 and Super 88 shared a 122-inch wheelbase. The Super was distinguished by better trim and 10 more horsepower. The Ninety-Eight rode a 126-inch wheelbase and had standard power steering and Jetaway transmission. The Super 88 had the best power-to-weight ratio of the three, which would have allowed this car’s first driver to make quick work of those shopping trips. 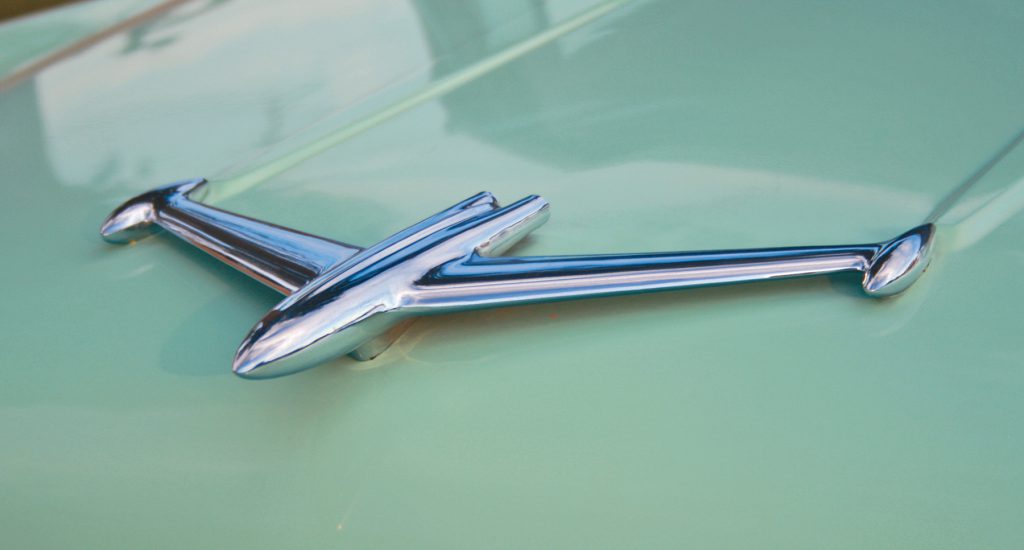