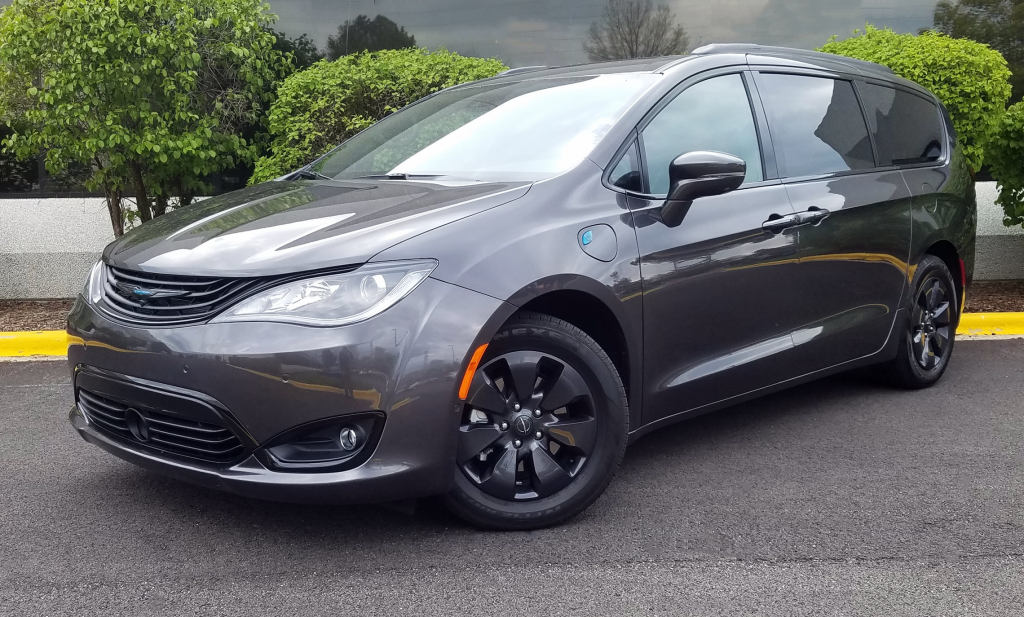 The not so good: Chrysler’s signature Stow ‘n Go second-row seats not available on Hybrid models

The Pacifica, Chrysler’s minivan since 2017, has several crowd-pleasing tricks up its sleeve. Not the least of them is that the nameplate graces the only hybrid found among the six minivan brands on the market, which gives the Pacifica Hybrid outstanding fuel economy and range for its class. 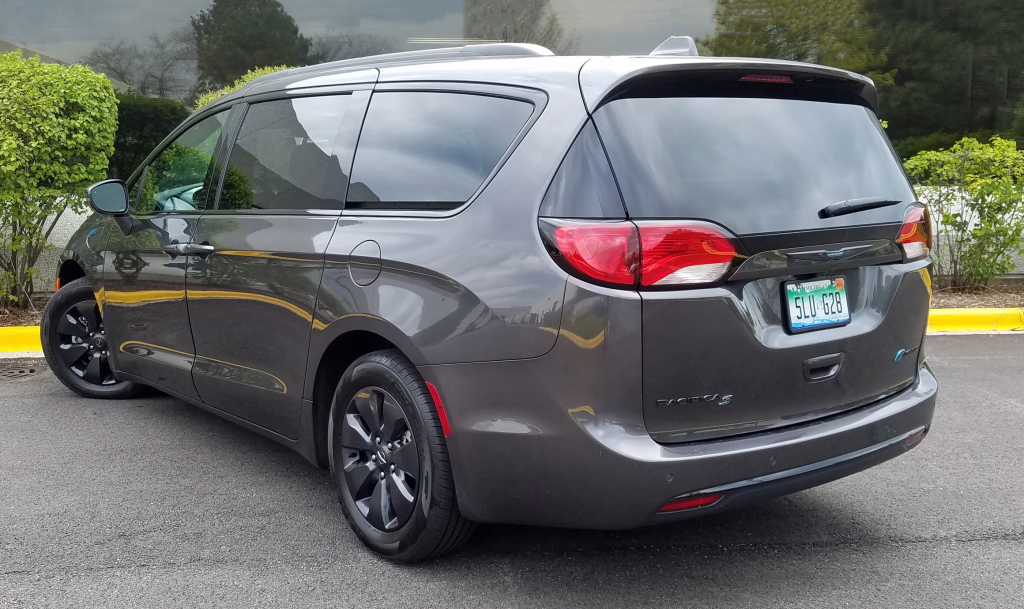 Three Pacifica Hybrids are available, with starting prices (including delivery) that range from $41,390 to $46,790. For this test, Consumer Guide sampled a top-trim Limited that cost $50,375 with options. Among the add-ons to the test van was the S Appearance Package—with black exterior accents and black-painted 18-inch alloy wheels—that is newly available for Hybrid models. Note that the vehicle may be eligible for a onetime federal tax credit of up to $7500. 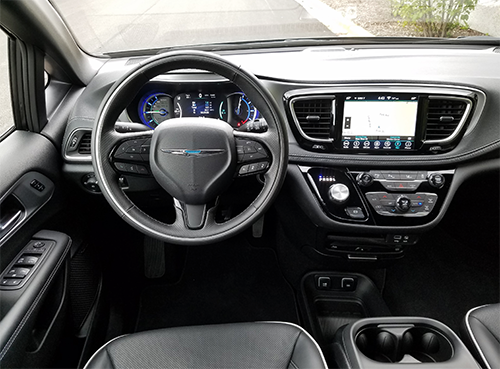 The Pacifica Limited’s interior has a classy, upscale feel, with an attractive, easy-to-use dashboard layout. We’re fans of the handy rotary shifter knob.

The Pacifica Hybrid is a plug-in type that allows for a considerable store of energy that translates into an advertised 32 miles of fully electric driving range from the 16-kWh battery. That said, when this reviewer got his mitts on the charged test vehicle, it indicated a projected range of 36 miles. In actual use, with the benefits of regenerative braking and air temperatures in the mid 60s, it covered 39.8 miles before the battery “zeroed out” and the Pacifica started operating as a conventional hybrid with limited electric assist. Variables in temperature and driving conditions will affect range. Unlike some plug-ins, the Pacifica doesn’t allow a driver to select all-electric mode when it might be most efficient, such as in city driving, and turn it off when it might be depleted too quickly.

The powerteam consists of an economy-tuned version of the corporate 3.6-liter gas V6 combined with two electric motors for a total 260 horsepower. The transmission is an “electrically variable” unit without the feel of stepped gears. The 3.6 doesn’t kick in until a concerted need for power arises, and the Hybrid doesn’t have quite the off-the-line zip of its all-gas brethren—though it generates enough instant torque to spin the front tires on damp pavement. On the Interstate it is capable of easy, quiet cruising. The EPA projects the Pacifica Hybrid at 82 MPGe, and 30 mpg of gasoline consumption in combined city/highway driving. This tester covered 191 miles in CG’s Pacifica, but burned gas for just 108 of those miles. With 45 percent city-type driving, his gasoline use worked out to 34.7 mpg for the total distance driven.

Since its debut, the Pacifica has been CG’s “Best Buy” pick among minivans, in part for excellent road manners and ride quality. It handles easily (even if the steering is somewhat numb) and rides smoothly on most surfaces. The Hybrid’s braking suffers a bit from the same lack of initial feel at the pedal that plagues so many electrified vehicles with regenerative energy capture.

Eighteen-inch wheels with a “Black Noise” painted finish are part of the S Appearance Package’s special black-out trim features. The electric charge port is located on the driver’s side front fender.

There are a few compromises in utility that come with selecting the Hybrid instead of a gas Pacifica. While the latter is rated to tow up to 3600 pounds, Chrysler does not recommend towing with the Hybrid. Plus, the Chrysler van’s famous “Stow ‘n Go” seating that retracts into the floor is not available for the Hybrid because of the drive battery’s placement in the middle of the vehicle. Third-row seating is a manually folding 60/40-split bench seat; in the middle there are two bucket seats that must be removed from the vehicle for maximum cargo capacity. As such, the Hybrid holds no more than seven passengers. Gas Pacificas can be ordered with a middle bench seat for 8-passenger capacity. 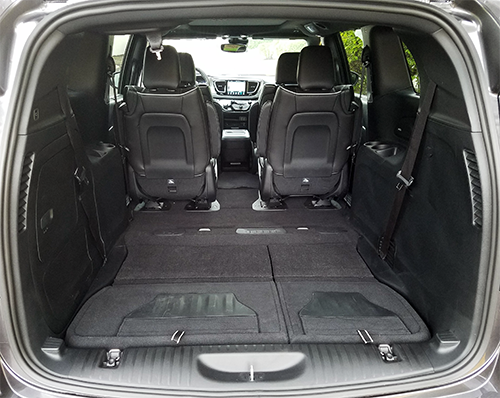 There’s abundant leg- and headroom while enthroned on comfortable front and middle buckets with flip-up armrests. The S package covers the seats in Nappa leather, and the front ones are heated and ventilated as standard equipment. There’s easy passage to the third row between the second-row seats, and the rearmost seats will accommodate adults. With the rear seats folded and the middle seats removed, a flat-floored cargo area of 140.5 cubic feet is exposed. Big windows afford good driver vision to nearly any angle.

Personal-item storage is subject to a spacious glove box, a large tray that pulls out from the center stack, a “purse porch” on the floor, and a covered bin and two exposed cup holders in the consolette between the front seats. The front doors each contain two rows of pockets, with the lower ones long enough to incorporate bottle holders. Middle-row occupants are presented with a pouch on the back of each front seat and a floor-level bottle holder in each sliding door. Cup holders and small bins molded into the sidewalls serve passengers in the third row.

The interior surfaces of Limiteds have a premium look and feel to them. The instrument dials and the 8.4-inch touchscreen for the Uconnect 4C infotainment system show several hybrid-specific readouts that monitor power use and energy storage. The central screen logically and directly handles settings for audio and standard navigation. Tri-zone climate-system selections can be tapped into the screen or manually set through a bank of controls below the viewer.

In a field that consists of only six nameplates it shouldn’t be hard for any manufacturer to come up with something distinctive for its product. Hybrid power is just one of the “somethings” that sets the Pacifica apart from the pack.

The Chrysler Pacifica Hybrid is the only hybrid in the minivan class, and it’s a plug-in hybrid to boot. It boasts outstanding fuel economy for a luxurious family hauler, and we regularly exceeded the advertised pure-electric driving range of 32 miles in our testing. If you have regular access to a Level 2 charger and do a lot of short-trip commuting, the Pacifica Hybrid is hard to beat.