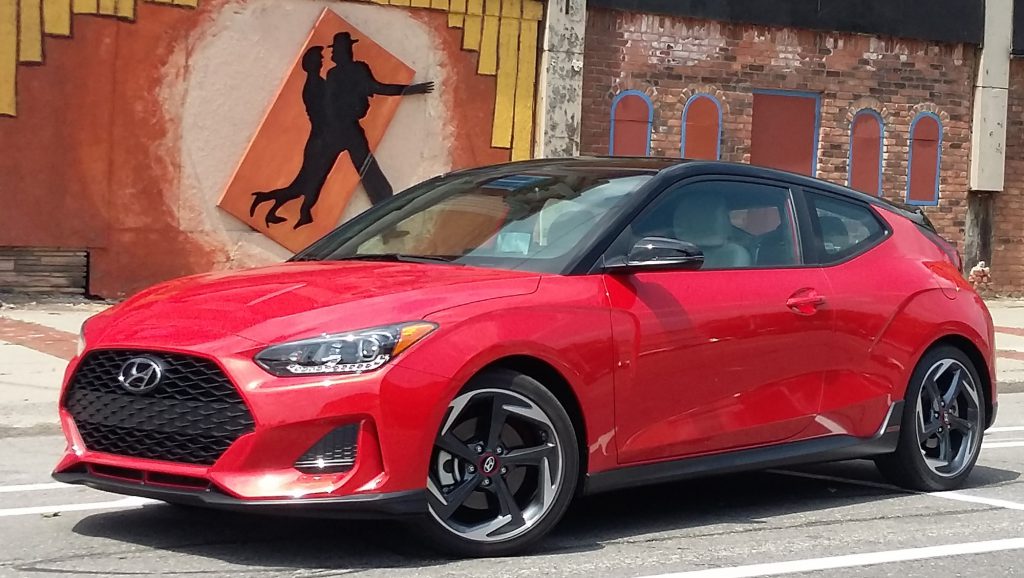 Hyundai’s sporty car returns for a second generation as a 2019 model, continuing its unusual 3-door layout and available turbocharged power but adding a host of new features and a higher level of practicality.

The Veloster continues as a sport-themed compact-sized front-wheel-drive hatchback with a rear door only on the passenger side. Base and Premium models come with a 147-horsepower 2.0-liter four mated to either a 6-speed manual transmission (base only) or 6-speed automatic. Turbocharged versions carry a 201-horsepower 1.6-liter turbo and are offered in R-Spec, base, and Ultimate trim levels. The R-Spec comes standard with a 6-speed manual transmission with unique short-throw shifter, the base only with a 7-speed dual-clutch automatic gearbox, and the Ultimate with either (minus the short-throw shifter). Due to be added later this year is a high-performance N model – the first from Hyundai’s new N Brand performance division – expected to carry a 2.0-liter turbo putting out 275 horsepower.

Prices for the Veloster start at $19,385 (including the $885 destination charge) with manual transmission, $20,385 with automatic. Notably standard on the Base 2.0 are Apple CarPlay/Android Auto compatibility, heated mirrors, forward collision warning and mitigation, lane-keep assist, rearview camera with dynamic guidelines, and driver attention warning, the latter sending out a warning tone when steering-wheel inputs indicate the driver is getting tired. 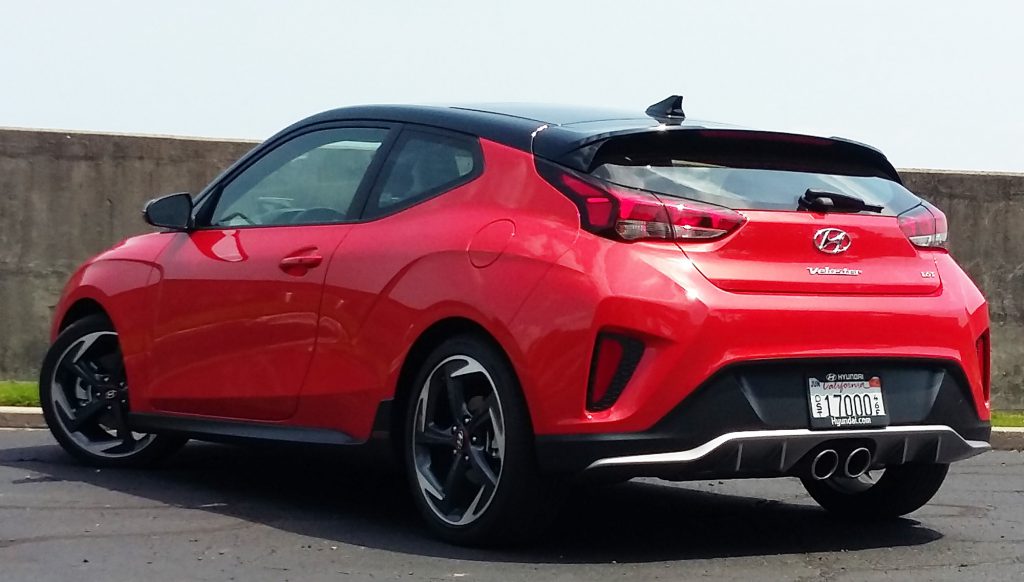 Turbo models wear some sporty exterior trim, and all versions offer enough passenger and cargo space to make them practical as everyday cars. 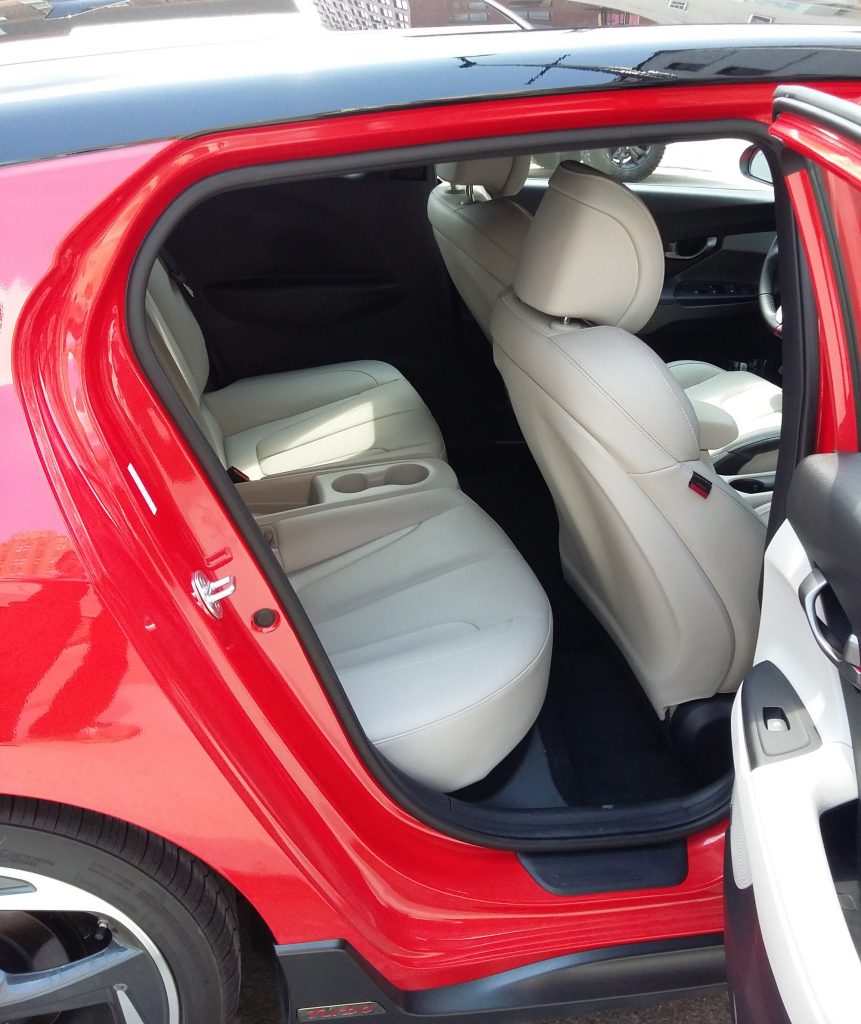 Veloster’s unique (at least, in recent times) third door provides easy access to the rear seat from the passenger side. In this photo, the driver’s seat is set for my 5’9 frame, and that leaves plenty of legroom behind it. The front passenger seat is pegged all the way back, yet I could still squeeze in behind it.

One of the most dramatic changes to the new Veloster is in rear-seat headroom. My 6-foot driving partner on the press preview fit back there with little trouble, something he said he couldn’t come close to doing in the previous model, as his head would come in contact with the hatchlid. Legroom is quite good as well, as my 5’9 frame could squeeze in even when the seat ahead was moved all the way back. One note though: While it’s fairly easy to get in and out through the passenger-side rear door – which hinges at the front like a “normal” door – it’s really difficult to get in back through the lone driver-side door because the driver seat does not automatically slide forward when the seatback is released (as you would do to enter the rear seat); it can only be moved forward with the normal seat controls.

In front, there’s plenty of headroom and legroom even for taller folks, and though the seat cushion doesn’t tilt, the Ultimate model we tested had power lumbar adjustment.

Visibility is good to the front and sides, bad to the rear, though a wide-angle 180-degree camera (with dynamic guidelines, a nice touch) really helps when backing. Hard plastic dominates the interior, as only the armrests are padded, though a two-tone color combination is offered that provides a classier look.

At least with the Infinity sound system fitted to the tested Ultimate, there are volume and tuning knobs along with eight physical buttons – all within easy reach – that make adjustments fairly easy. Also within easy reach are the climate controls, so the Veloster maintains Hyundai’s traditionally good control layout.

Interior storage is quite good for a sporty car, as there’s a large glovebox, decent-size console box, two cupholders, a large forward console bin under 12-volt/Aux/USB plugs, and small map pockets with cupholders in the doors. 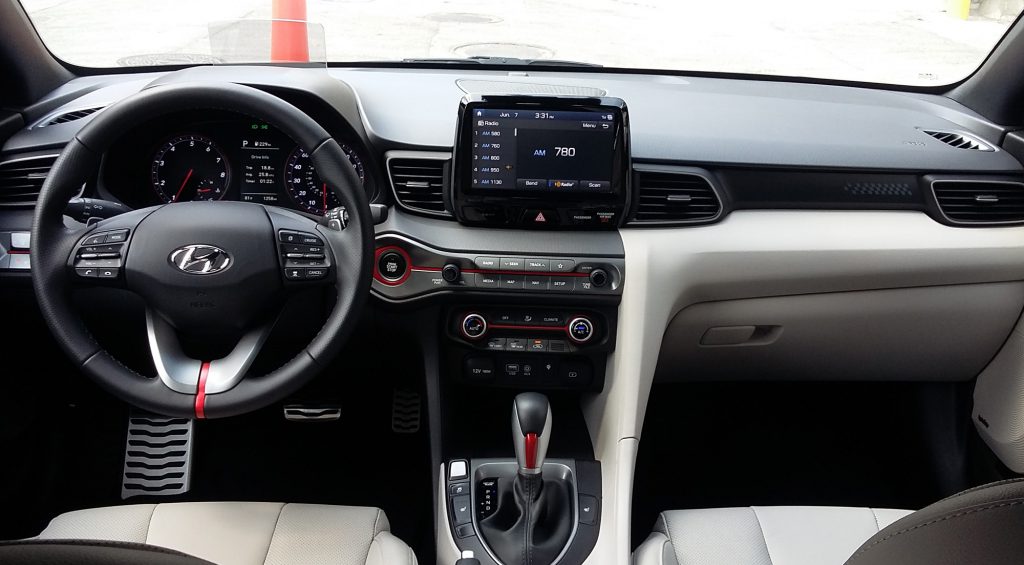 There are few padded surfaces inside, but particularly with the available two-toning, the interior still exudes a sporty/classy look. In the Hyundai tradition, audio and climate controls are easy to reach and use.

Cargo room is likewise good for a sporty car, but with some caveats. First, there’s about a one-foot drop from the cargo opening to the cargo floor – which makes unloading heavy items a chore – and the folded rear seat backs rest about three inches above the floor, meaning long items can’t easily be slid forward. Also, the seat back is split 60/40, with the wider part on the driver side, and folding the seat back up on that side means making a long, awkward reach back through the front door opening. 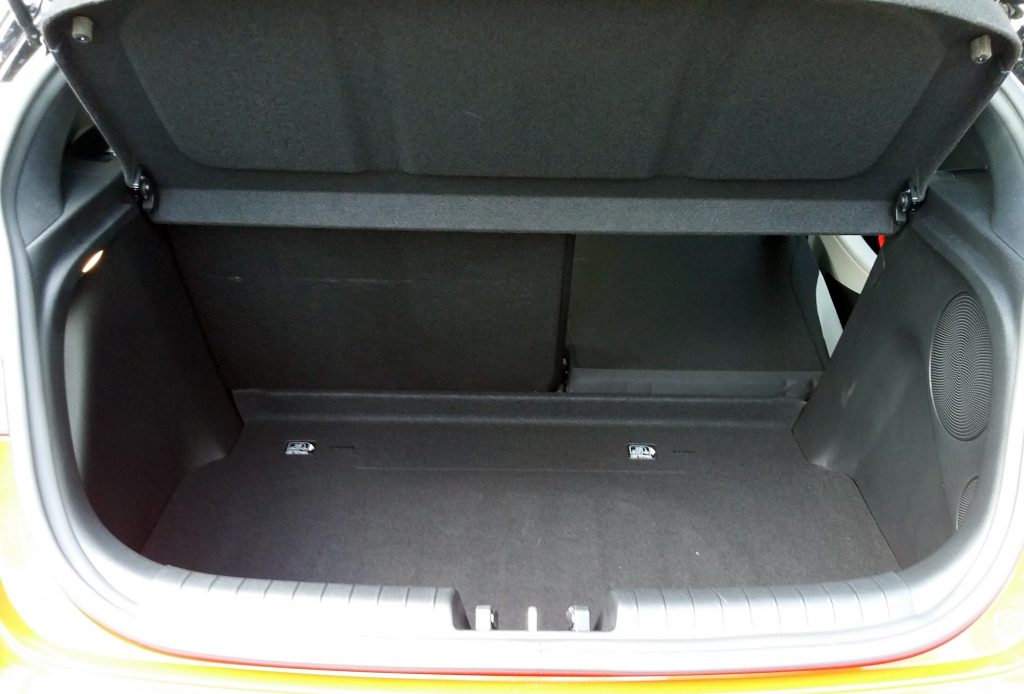 There’s decent cargo space in back, but there’s also a one-foot drop from the cargo opening to the floor (making it tough to lift heavy objects out) and a 3-inch step to the folded rear seat backs (so long items can’t be easily slid forward).

All the models provided at the preview were turbos, and we spent time in both an R-Spec and an Ultimate. Most notable on the manual-transmission R-Spec was its short-throw shifter, which had a very quick, precise action. With the 7-speed dual-clutch automatic transmission in the Ultimate, there was just a bit of turbo lag off the line in a full-throttle launch, and kickdowns when the throttle was floored from speed weren’t always real quick. The ride in both models was a bit stiff and “active,” though the Ultimate felt a bit better than the R-Spec in this regard. Handling is good in both models, and the overall feel matches the cars’ sporting intent.

Although we classify the Veloster as a sporty/performance car, perhaps its closest rivals are sporty versions of regular front-drive compact hatchbacks such as the Ford Focus ST, Honda Civic Hatchback (and Si coupe and sedan), Kia Forte5, Mazda 3, and Toyota Corolla Hatchback, and even its Hyundai Elantra GT sister. And the upcoming Turbo N could rival really sporty hatchbacks like the Honda Civic Type R. In any event, the Veloster is far more practical than it used to be (if perhaps not quite so much as some of its 4-door competitors), while providing a sporting demeanor and thoroughly modern features at prices that keep it in the sporty-car hunt.

The passenger-side’s rear door has a camouflaged release handle at the rear of its window, helping give that side a pseudo “2-door” look to somewhat match the real 2-door look of the driver side.