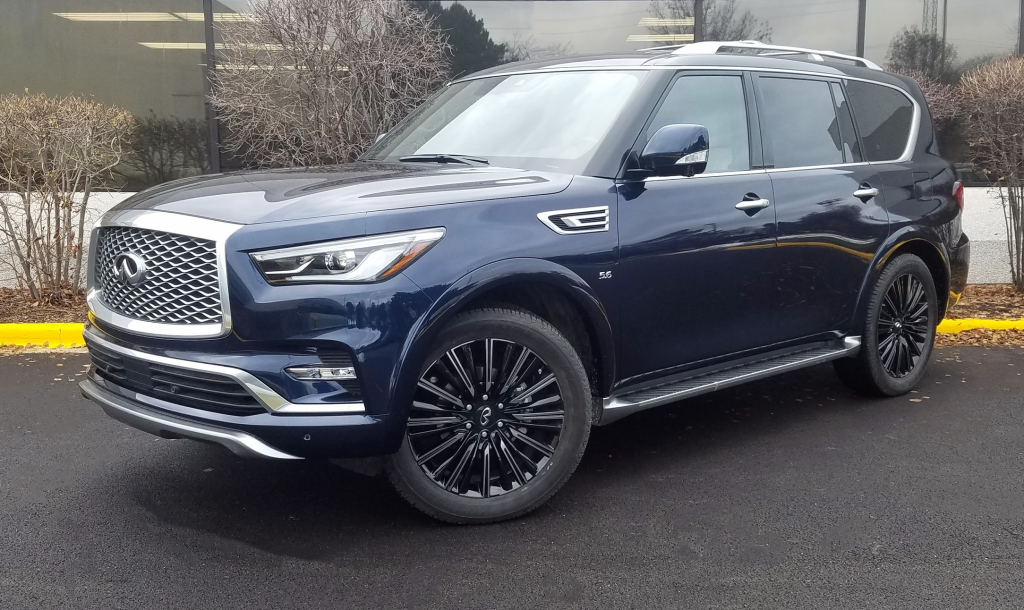 Should a luxury-brand sport-utility vehicle hold back on deluxe appointments and gadgets? If that question was ever raised among the folks responsible for the Infiniti brand, their QX80 Limited seems to represent a definitive “no.” 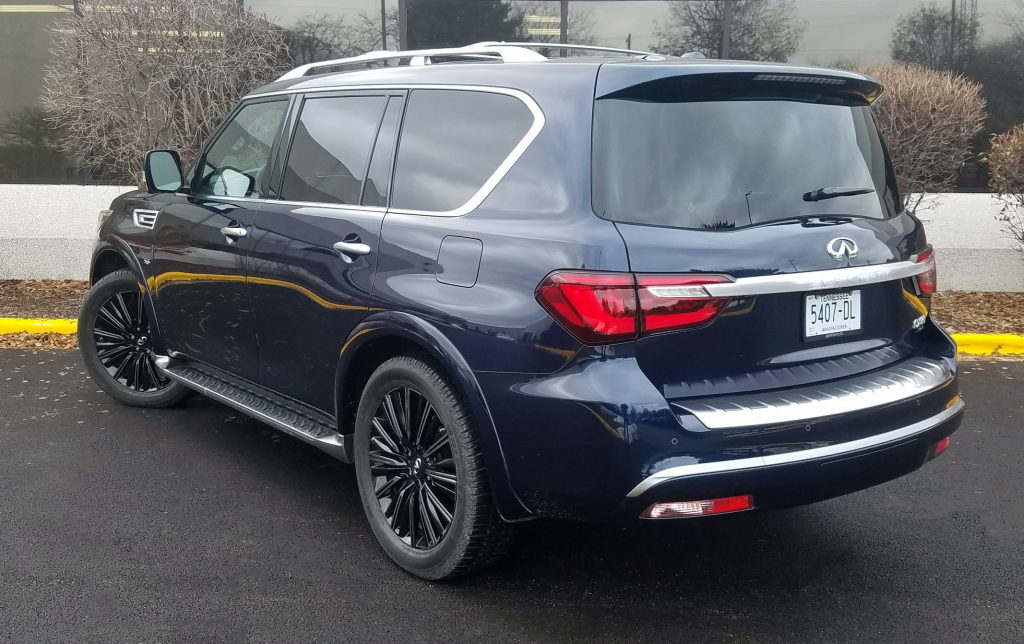 After a styling refresh last year, the Infiniti QX80 regains an extra-premium Limited model for 2019.

For 2019, the newest thing about the QX80, Infiniti’s premium-large SUV, is the arrival of the Limited as a top-of-the-line offering that comes about as complete as the company can make it. It stickers for $91,095 delivered—a $21,600 jump from a QX80 Luxe 4WD that’s the next step down—with only an assortment of dealer-installed extras left to vacuum a little extra cash from buyers’ wallets. Indeed, the Limited that Consumer Guide sampled had an upgraded floor-mat and cargo-protector package that brought the bottom-line figure to $91,450.

The top-line Limited trim level takes the QX80’s already posh cabin appointments to another level. The special touches include semi-aniline leather upholstery with Alcantara accents and an elaborate stitching pattern,

You could load in just about everything that’s in a Limited through several factory-applied option packages for the Luxe. However, with the stroke of a pen on a Limited sales contract, the buyer cuts right to the chase and gets:

Of course, there’s plenty of posh at the Limited’s elevated price point. You’ll find plush-to-the-touch surfaces all around. Contrast stitching in the black dash and door panels matched the lighter Graphite seat color of CG’s test truck. The silvery finish on the ash trim fits with this interior combo—and its “frosted” look seemed all the more appropriate when driven in the dead of winter.

The spacious second row is equipped with a large center console and an entertainment system with 8-inch screens built into the front-seat headrests. The third row is spacious enough for average-sized adults, but they’ll likely ride knees-up.

If you’re one of those SUV shoppers who rates “commanding view of the road” as a leading reason for being in the segment then you might be in for a treat with QX80. The position of the height-adjustable front seats is quite high, even with the cushion down as low as it will go. The front buckets and middle-row captain’s chairs are extremely comfortable with good support. Third-row seats in this 7-seat vehicle aren’t as well padded, but their backrests recline with power assist. Front legroom is good; headroom is better. The second row is wonderfully roomy. The third row is open to a couple of average-sized adults, though a raised floor makes passage to the rear a little tricky, even with the tipping middle seats. With the tall step-in height, you’ll appreciate the running boards.

Audio, navigation, and other functions are monitored through an 8-inch touchscreen. Audio presets are easily made via the screen, but there are lots of control buttons for the various infotainment features and climate control on the center stack of the instrument panel. A control dial on the console lets the driver select the driveline setting from “Auto,” “4-high,” or “4-low”—unlike the Luxe, the Limited comes only as a 4-wheel-drive vehicle. 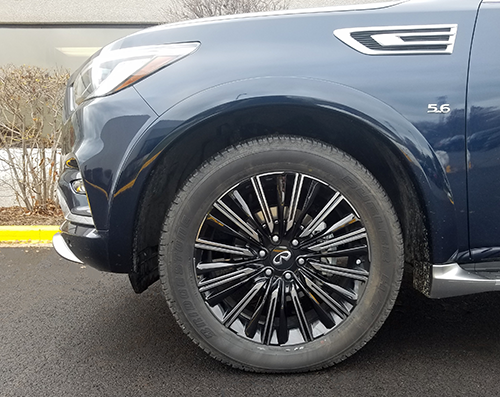 Cabin storage for personal items is managed by a large glove box, a wide covered console box, and door pockets with bottle holders. Covered cup holders are found in the console. The middle row has its own console box and covered cup holders between the seats, and second-row occupants can avail themselves of pouches attached to the backs of the front seats. Open cup holders are provided in the sidewalls astride the third row.

The QX80 is a first cousin to the Nissan Armada, and among their shared “genetic material” is a 5.6-liter V8 mated to a 7-speed automatic transmission with adaptive shift control. Anyone looking for reasons to prefer the pricier Infiniti version of this body-on-frame SUV can start with power. In the QX this engine generates 400 horsepower and 413 lb-ft of torque, respective gains of 10 and 19 from what’s available in the Armada. (However, there is no change in towing capacity, which stands at 8500 pounds when equipped with the optional towing package.)

The engine is strong, mostly quiet (though it will make some noise when pushed), and kickdown is prompt. Indeed, you wouldn’t know it to look at it, but the QX80 is a little bit of a goer. One of the places it will go frequently is the gas station. EPA fuel-economy estimates are just 13 mpg in the city, 19 mpg on the highway, and 15 combined. When this driver put 201.8 miles on CG’s test truck—40 percent of that in city-type operation—it returned 13.86 mpg.

Ride from the fully independent suspension is borderline spongy, but the body-motion control system helps to keep the QX80 from going outright aquatic. Bumps are handled pretty well. Steering, which in the Limited varies in accordance with vehicle speed, clearly firms up if you turn quickly or tightly.

Cargo area goes from fairly limited behind the third-row seats to extremely spacious with the rear- and middle-row seats retracted. The rearmost seats are divided in a 60/40 split, and they retract slowly with a power assist. When the middle seats are lowered, the top of the console between them sticks up, which creates an “island” around which certain long loads must be placed.

That rarified group of SUV shoppers that wants a large vehicle with luxury trimmings and the kitchen sink may not blanch at the QX80’s price tag. For everybody else, there are cheaper alternatives, even in Infiniti showrooms. 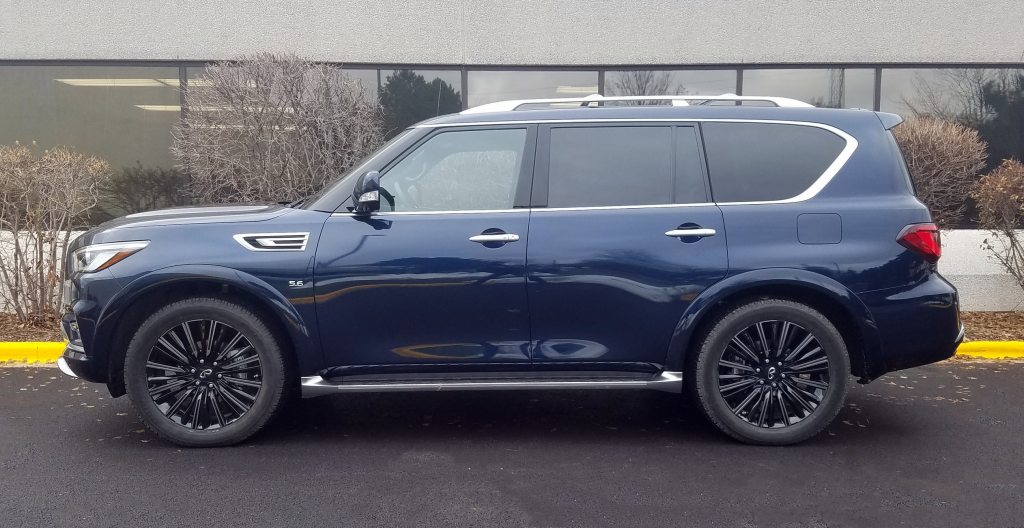 Premium large SUVs are a lavishly appointed group of vehicles, but even by those standards, the extra-posh trimmings of the Infiniti QX80 stand out. Despite its plus-size proportions, the QX80 is quicker than you might expect, but you’ll be filling up with premium fuel frequently, even if you’re judicious with the throttle pedal.