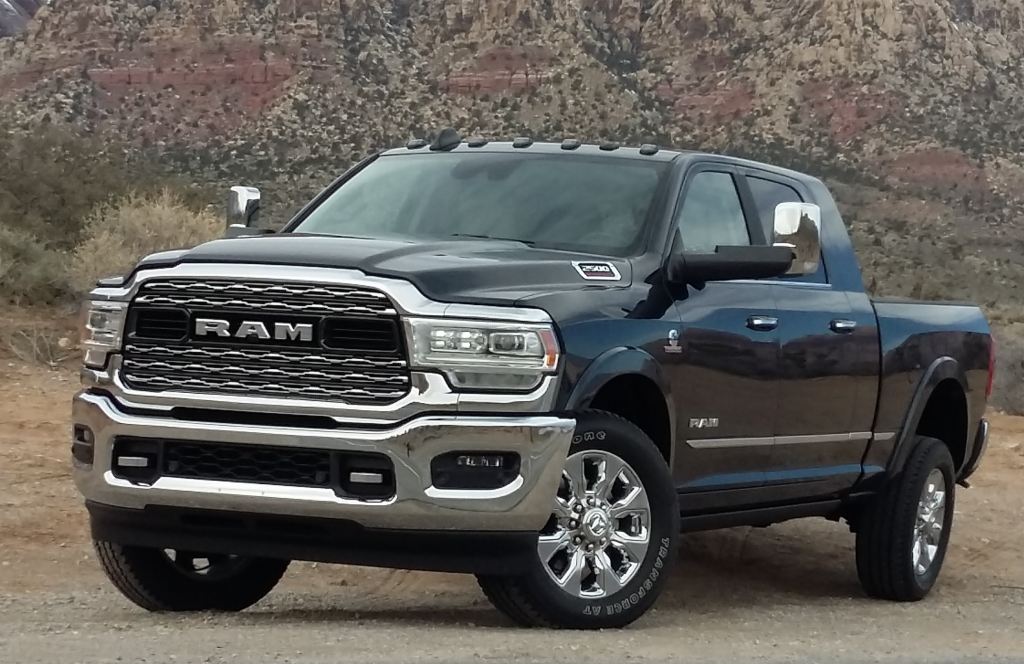 Over the past couple of decades, those following heavy-duty pickups have been treated to a race similar to that enjoyed by car enthusiasts for years. This one, however, wasn’t about horsepower; it was about torque. And though all the top contenders kept leap-frogging each other toward that magic 1000 lb-ft finish line, it was Ram that got there first.

But why is torque more important to these folks than horsepower, and what’s the difference? 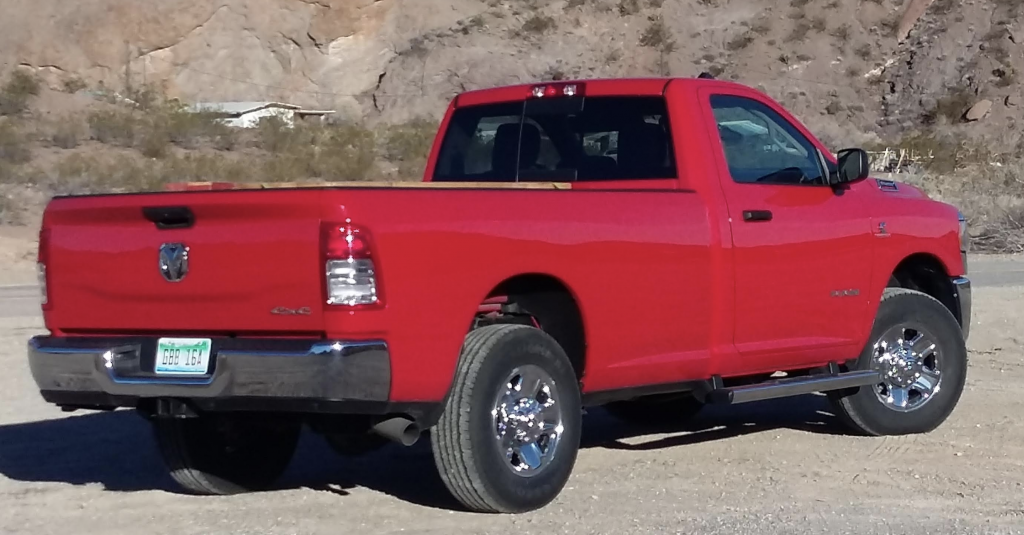 Since pulling a heavy trailer from a stop means starting from a low engine rpm, “low-end torque” is the power measurement with the most meaning. And since diesels can’t typically “spin” to nearly the rotational speed of a gas engine, measuring their output in horsepower would make them look like 98-pound weaklings compared to their gas-powered siblings, which would be counter to their ability to pull heavy loads from a stop – or up a hill – which is what’s most important to those who tow. And according to one Ram representative, 90 percent of heavy-duty pickup buyers do. All of which explains why Ram has put so much effort into appeasing these folks – and why there was such a concentration on it at the recent press preview of the new 2019 Ram Heavy Duty models in Las Vegas. 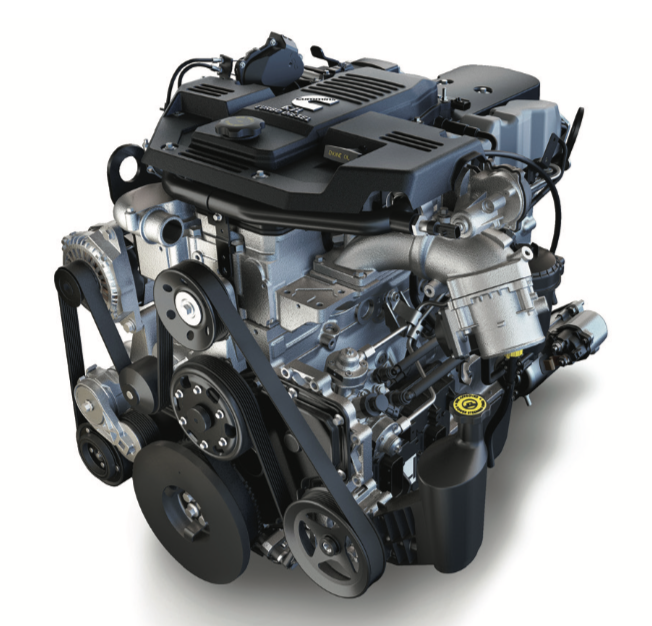 Optional on 2500s is a 6.7-liter Cummins inline-six turbodiesel putting out 370 horsepower at 2800 rpm and 850 lb-ft of torque at 1700 rpm. That engine is likewise optional on 3500s, which also offer the big bruiser mentioned up top: a modified version of the same 6.7-liter turbodiesel, rated at 400 horsepower at 2800 rpm and a whopping 1000 lb-ft of torque at 1800 rpm. With both turbodiesels, note that not only is peak torque about twice as much as that of the gas engine, but that it comes in at less than half the rpm.

Towing capacity isn’t entirely dependent upon engine output, however; it also has to do with suspension, braking capability, and tires.

A horse trailer (left) doesn’t much challenge a Ram Heavy Duty; a backhoe with weight added to the trailer (necessary to “test” the 3500’s max 35,100-lb towing capacity) is a bit more demanding.

As might be expected, the new Ram HDs closely resemble their redesigned ½-ton 1500 counterparts introduced last year. There are some appearance differences inside and out, and the HDs offer an extended Mega Cab body that adds three inches of rear legroom over the Crew Cab (along with a good amount of added storage space), but the family resemblance is unmistakable. Available comfort, convenience, and safety features are similar as well, so we invite you to check out our First Spin of the 2019 Ram 1500 for more information on those topics.

Each trim level of the 2019 Ram HD gets a unique grille, from the base Tradesman (top left) to the decked-out Limited (lower right). The outlier of the group is the off-road-oriented Power Wagon (lower left) which includes a front-mounted winch and other rough-country features, and comes only with the gas V8.

Each trim level of the ¾-ton 2500s and 1-ton 3500s boast a unique front-end appearance. While basic black adorns the entry-level Tradesman, grilles get increasingly ornate as the trim level (and price) rises through the decked-out Limited, with the exception being the off-road-oriented Power Wagon, whose grille is also dressed in black – though with a unique texture. We’ll touch on distinctive aspects of the Power Wagon in a bit.

As might be expected, Ram Heavy Duty models are available with a host of features tailored to those who tow. Some of these are new for 2019 and include:

A host of different available cameras allow the driver to view virtually every aspect of the truck — and a following trailer — on the dashboard screen. Also able to be displayed for both are individual tire pressures.

Also as might be expected, the preview included opportunities to tow, but we also drove unladen vehicles. And that brought out a chief difference in gas- and diesel-engine models.

Almost surprisingly, that “chief difference” wasn’t in noise production. Certainly you could hear the turbodiesel most of the time, but it was more of a subtle roar under acceleration than the constant “clatter” that used to define the breed. No, the chief difference was in acceleration.

Available side mirrors can be pivoted up to provide a taller view so that the driver can see what’s behind as well as where the tires are tracking.

Unloaded, the gas-engine models seemed far quicker than the diesels. Nail the throttle from a stop, and the gas models leaped off the line; the diesels, meanwhile, suffered the typical “turbo lag” that had them just sort of “moving off” at first, then – about 20 feet later – pulling much harder. The same was true when hitting the gas while underway: The eight-speed automatic transmission in the gas models downshifted almost instantly – and in fact, are among the quickest to do so that we’ve ever tested – while the six-speed units in the turbodiesels combined with turbo lag to delay response a bit. When towing, however, turbo lag in the diesel seemed to be lessened, possibly due to the fact that the engine was put under heavy load immediately, which helps build turbo boost.

Disconnecting the Power Wagon’s sway bars — which is done with the touch of a dashboard button — allows for more articulation (front wheels tilted at the opposite angle of the rears), which aids in finding traction in severe off-road work. Also available on the Power Wagon is a front-mounted camera that displays what’s immediately in front of the vehicle, and also where the tires will track with the steering wheel turned to different angles.

Unique in its mission is the Power Wagon. While towing is the name of the game for its siblings, off-road prowess is the focus of the Power Wagon. To that end, it features such items as special off-road suspension and tires for added ground clearance, locking front/rear and center differentials, sway-bar disconnect (which allows for more wheel articulation), and downhill descent control. Also offered is front-mounted 12,000-lb winch and a front camera that shows obstacles that are below the driver’s line of sight, along with the projected path of the tires as the steering wheel is turned. Power Wagon comes only with the “gas” V8 engine.

Along with its impressive list of available comfort, convenience, and safety features, the new Ram Heavy Duty is the current top dog among pickups when it comes to torque output and towing capacity. While others may eventually top its 1000 lb-ft /35,100-lb ratings, only Ram can claim that it got there first.

While it looks much like its 1500 half-ton counterpart, the Ram Heavy Duty boasts some unique styling elements, and notably is available in a “stretched” Mega Cab body style that adds three inches of rear legroom and a bunch more rear storage space. It also adds thick rear roof pillars that make the various cameras offered a godsend when backing.