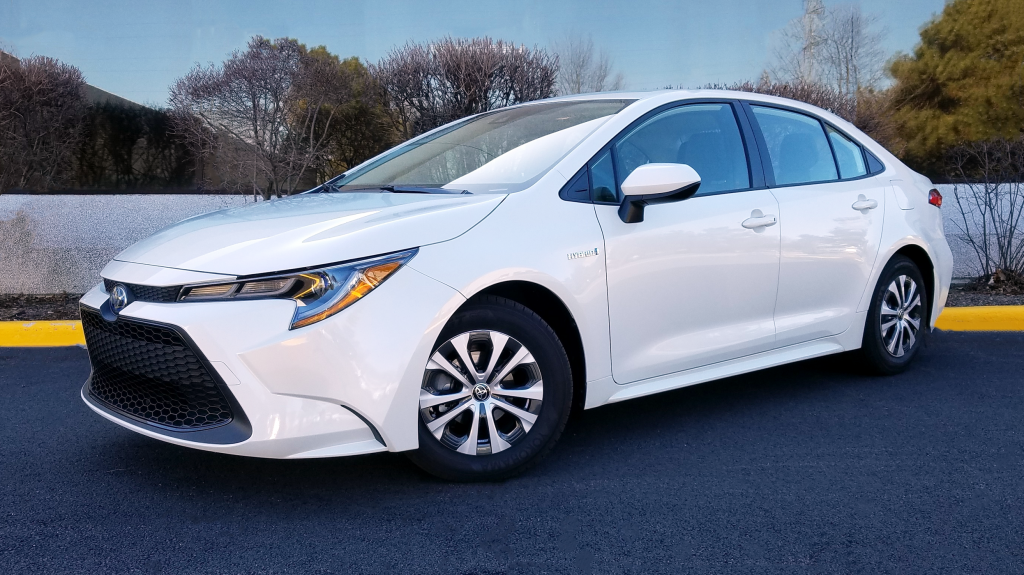 The not so good: Missing a few upscale features, so-so interior ambiance

More A7 price and availability information

The Corolla, Toyota’s ubiquitous “commodity” compact, has been around seemingly forever (since late 1966 in Japan and spring ’68 in America). However, this is the first time that it has been available as a gas/electric-powered hybrid. The powertrain is similar to that of the Prius: a 1.8-liter gasoline engine paired with two electric motor/generators fed from a new generation of nickel-metal hydride battery for a combined 121 horsepower. 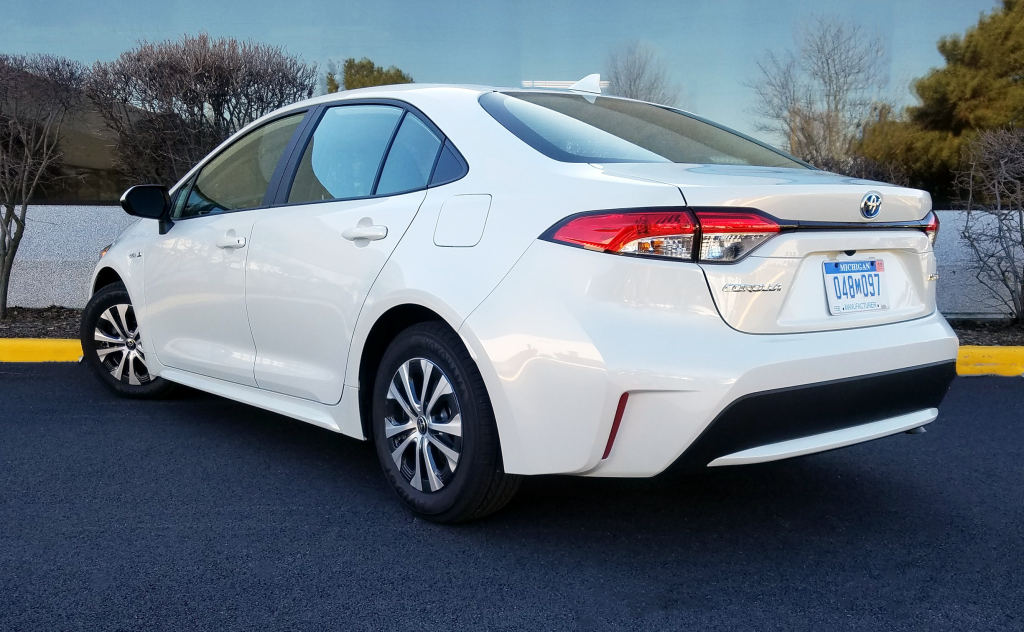 For this year at least, all Corolla Hybrids are LE models–a trim level that is one step up from the base L model in the Corolla hierarchy. So, there aren’t a ton of frills here, but the standard features list nevertheless includes welcome stuff such as LED headlights and taillights, heated power mirrors, push-button starting, and Toyota’s excellent Safety Sense 2.0 suite of active safety features (which includes adaptive cruise control with stop-and-go capability).

The figures aren’t terribly interesting until you see that the EPA rates the Corolla Hybrid at 53 mpg in city driving, and 52 mpg in both highway and combined operation. We’re here to tell you that a body can do better than that. For instance, this reviewer recorded 55.5 mpg from a test stint of 200.6 miles that consisted of 50 percent city-style driving.

In LE form, the new Corolla sedan’s interior is a pretty plasticky place, but there are a few gloss and satin-metal-look trim pieces that add at least a little flair, and everything feels sturdy and well assembled. Corolla sedans have a wheelbase that’s 2.4 inches longer than their hatchback siblings, which provides a welcome increase in rear-seat legroom.

Gas-engine operation is a little noisy and somewhat rough at idle, and there’s much audible humming and whirring from the drivetrain during acceleration and deceleration. However, transitions between electric and gas power are utterly seamless. There’s alert takeoff from a standstill, when the electric motor gets things rolling, but the Corolla Hybrid does keep up decently on the highway. Its automatic continuously variable transmission winds on during steady acceleration, but doesn’t dally too much when kickdown is needed for passing. Selectable “ECO” and “Power” driving modes induce changes in throttle behavior that are extremely subtle. The Corolla Hybrid also has an “EV” mode that allows it to be driven for short distances on electricity alone. 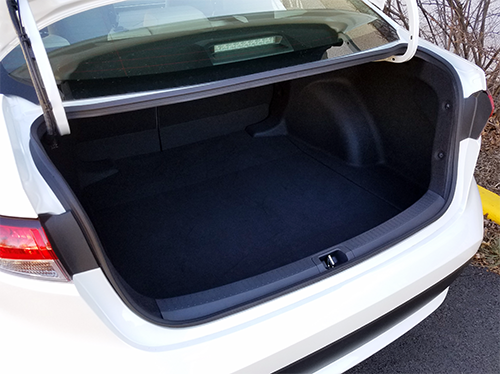 There’s a respectable 13.1 cubic feet of cargo space in the Corolla sedan’s trunk, thanks in part to a helpfully low load floor. The rear seat backs fold for more cargo versatility–something not all hybrid sedans can boast.

The hybrid is one of the family of new-for-2020 Corolla sedans, which follow the lead of the 2019 Corolla Hatchback. The twelfth-generation Corolla sedans have the same 106.3-inch wheelbase as their immediate predecessors, and interior head- and legroom are unchanged. However, the new cars are almost a full inch lower, slightly shorter end to end, and minutely wider. With a curb weight of 2850 pounds, the hybrid is the lightest of the new Corollas.

A single LE trim level is provided for the Corolla Hybrid, which starts at $23,880 with delivery. (Gas cars come in L, LE, SE, XLE, and XSE versions. The hybrid costs $3000 more than a gas LE.) There are no upgrade packages for the hybrid, just stand-alone options like the Blizzard Pearl paint and carpet mats that were on the $24,524 test car.

Standard equipment starts with 15-inch alloy wheels and 195/65R15 all-season tires, black “sport-mesh” grille, LED headlights and taillights, and heated power-adjustable exterior mirrors. Inside are an electronic parking brake, push-button starting, automatic climate control, and a 7-inch color thin-film-transistor vehicle-information display. The audio system consists of a 6-speaker AM/FM radio with an 8-inch touchscreen and Apple CarPlay compatibility. There are two USB ports, one for device input and one for charging, and Bluetooth phone and music-streaming capability. As on all Corollas, the Safety Sense 2.0 suite of safety minders is included as well. It consists of forward-collision warning and mitigation with pedestrian and daytime cyclist detection, lane-departure warning and mitigation, lane-keep assist, full-speed adaptive cruise control, automatic high beams, and road-sign recognition.

The overall effect is functional but nowhere near lavish. Cloth-covered door armrests and the console-box lid are padded. The top and the face of the dash in front of the front passenger have underlying give, but there’s lots of grained plastic elsewhere. Audio and climate systems are basic. At least you won’t waste time (or attention to the road) in setting them up and operating them. Upholstery is sturdy cloth and front seats are adjusted manually. At least those seats are comfortable.

The Corolla Hybrid is powered by a 1.8-liter 4-cylinder paired with two electric motors for a total horsepower output of 121. Acceleration is sufficient, and fuel economy is excellent. We appreciated the bright, easy-to-read graphics of the digital gauge cluster; the readout at left-center is an instantaneous economy gauge that assists in frugal driving.

Passenger room is pretty good for the class. Rear seat backs are somewhat upright, but there’s the enough legroom to welcome 6-footers—though headroom for them might get kind of short back there. To the good for cabin storage is a decently sized glove box. On the other hand, console-box capacity is small, as are all door pockets—they’re barely angled slots in back. Pouches are affixed to the backs of the front seats. Exposed cup holders reside in the console and the rear-seat armrest. The trunk has a wide opening, and useful squarish dimensions with minimal wheel-house intrusion. The compact new hybrid battery fits under the rear seat cushion and allows the 60-40-split seat backs to retract.

In terms of driving dynamics, there’s not a lot of steering feel, but the Corolla Hybrid is nicely maneuverable for getting in and out of parking spaces or through tight traffic. Cornering lean is pretty well under control, and ride quality over distressed pavement is pretty good for a small car. Brake action has a little less of that pedal vagueness that afflicts most hybrids as they capture energy and transfer it to the battery.

Toyota has unequivocally demonstrated its devotion to the hybrid automobile by lacing them throughout its product line. Adding one to the Corolla line only reinforces the point. It may be just the thing for people who would buy a small hybrid like the Prius if only it weren’t so Prius-y. 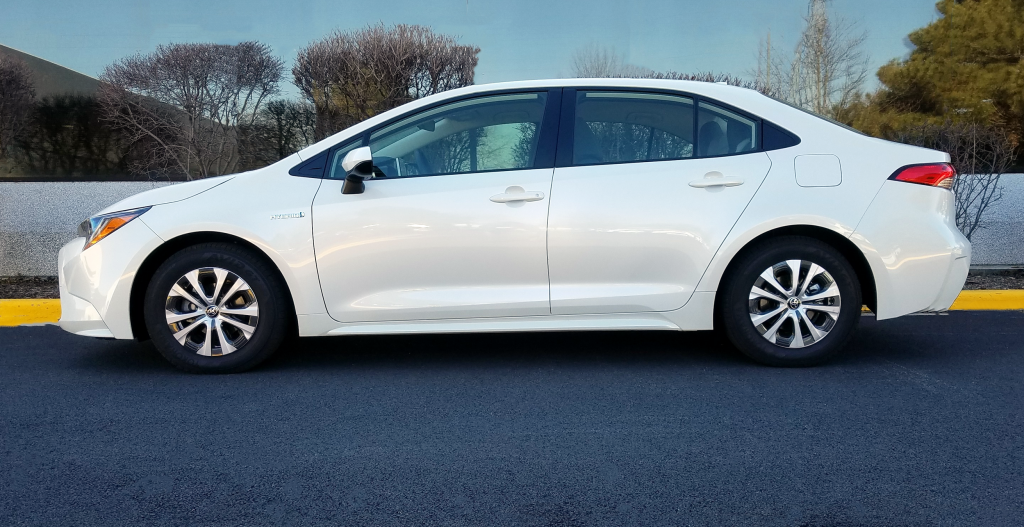 Affordable to buy and affordable to run… the new-for-2020 Toyota Corolla Hybrid delivers fantastic fuel economy at a bargain price, and its pleasant driving demeanor and generous list of standard safety equipment sweeten the deal.