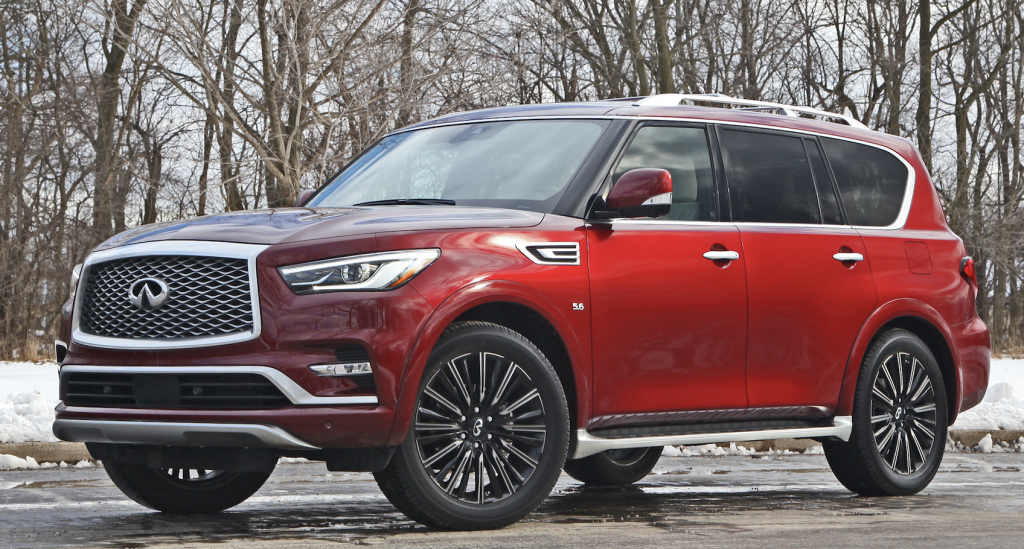 The not so good: Fuel economy, high cargo floor

With midsize crossovers getting large enough that some now seat up to eight passengers, full-size ones are getting harder to justify. And that goes double for premium full-size ones, which oddly appear in greater number. 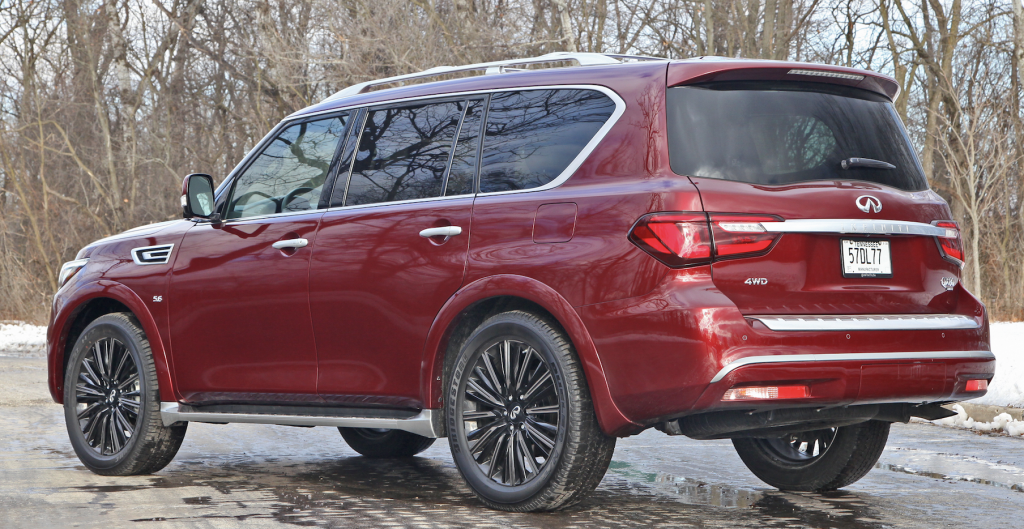 Whereas the base QX80 Luxe model rides on standard 20-inch wheels, the tested top-line Limited comes with 22-inchers — which look really nice, but may have hurt ride quality a bit.

An exception to that is if you tow. Most full-sizers have big V8s (or powerful turbo V6s), along with “road hugging weight” that helps stabilize the vehicle/trailer combination. Whereas midsize crossovers usually have a towing limit of about 5000 lbs., some full-size ones can tow roughly twice that. In the case of the Infiniti QX80 – with its potent 400-horsepower 5.6-liter V8 – the towing limit is 8500 lbs. And standard equipment includes not only a trailer hitch, but also an auto-leveling rear suspension.

While its big V8 produced strong acceleration and the transmission kicked down quickly for good around-town throttle response, we averaged just 13.8 mpg in a mix of city/highway driving. And the ride/handling combination was not a strength. We blame some of that on the tall ride height — which prompts some side-to-side body sway — but more of it on the low-profile 22-inch tires that come standard on the top-line Limited (the base Luxe riding on standard 20s). For while the suspension seemed compliant enough – and even a little too compliant in some cases, making the vehicle seem a bit tipsy – its tires seemed to patter too much (in both sound and feel) over even small road imperfections.

If you just look at overall length, the QX80 doesn’t come off as being that big. At 210.2 inches stem to stern, it’s about the same length as the shorter version of the Lincoln Navigator (the longer L version stretching to 221.9). But it’s also wide and very tall, the former hurting maneuverability, the latter doing its part to make the vehicle seem a bit ungainly.

The tall ride height also makes it a bit of a task to climb into, though handles on the roof pillars (even up front) help. Drivers get a commanding view of the road, mostly because they sit so high (and the driver seat can be raised quite high itself), but you also look out over a very tall, bulbous hood. Visibility isn’t particularly good, however, as all roof pillars – even those in front – are quite thick. Helping when backing is a 180-degree rearview camera (nice) along with a 360-degree system; you can call up the desired view (including the right-side curb) from the touchscreen or a console button. Both front seats (12-way power driver, 10-way passenger) get lumbar adjustment and heat/ventilation, and the Limited upholsters them in ritzy semi-aniline leather with Alcantara accents. Oddly, front headroom is good though not great, and front legroom isn’t as vast as you might expect. (In fact, our 6’6 tester Damon Bell gave it just a B+ for room.)

But in back it’s a different story. Oh, it’s still a tall step to get inside, but there’s equally good headroom and nearly vast legroom in the second row, where the seats are heated. My 5’9 self fit just fine in the third row, though there wasn’t a lot of foot room and the seat felt a bit hard. It was also a bit tough to maneuver through the door opening to get back there, mostly because the floor rises significantly under the flipped-forward second-row seat, tightening the floor-to-ceiling space. However, when flipped, the second-row seats leave a fairly wide opening, so smaller folks – if they can make the jump in – should find third-row access fairly easy. If fitted with the optional second-row bench seat (which ups seating capacity from seven to eight), a center-seater has a nearly flat floor under foot. Passengers have access to HDMI video plugs (the screens are on the back of the front-seat headrests) along with audio, 12-volt, USB, USB-C, and even 120-volt (household current) plugs, though most are mounted low and are difficult to access.

At left is the 2019 QX80 dashboard, with the new InTouch dual-screen setup — the biggest change for 2020 models — at right. The new design makes some controls more accessible, but sacrifices a bit of the “one-step” functionality of buttons.

Although this Infiniti QX80 Limited would seem to be much like the same 2019 vehicle driven last year, it had one big difference: For 2020, Infiniti’s King-size SUV gets a new InTouch twin-screen infotainment system with what the company says are improved graphics, faster response time, and Apple CarPlay/Android Auto functionality. The lower screen is a touchscreen, the upper one just for information display.

For the most part, this worked well. However, the audio system’s volume knob is mounted rather low (easier to use the redundant one on the steering wheel), and you can’t mix different bands (AM/FM/Satellite) in Favorites. On the plus side, it does have a CD player, an increasingly rare feature. The climate system is controlled by an easy-to-reach stack of buttons along the left side of the lower screen, all being of the repetitive-step pushbutton variety rather than more convenient rotary knobs.

There’s good cargo space in back, and the third-row seat backs fold with the press of a button on the cargo-area sidewall (middle) or on the dashboard (right). But the load floor is high off the ground, making it tough to load heavy items.

Interior storage space is adequate but no more, with cargo space in back being about the same. Notable is that the third-row seat backs power fold (a real convenience), both rear rows fold level with the cargo floor (ditto), and there’s a little bit of added space beneath the floor. But that floor is a lofty 35 inches above the ground, which not only makes it difficult for shorter folks to load things in, but also limits the height of cargo that can be carried.

As might be expected of a $90,000 vehicle, the QX80 is loaded with safety and convenience features. But overall, it lags a bit behind some better-known, more-modern competitors. As such, sales are limited, which might be looked at as a positive point to those looking for a big SUV that stands out from the luxury-class crowd.

Compared to some luxury rivals, the QX80 has a somewhat aggressive, even sporty look. And that — along with its relative rarity — may be a draw for those wanting a capable SUV that stands out from the herd.