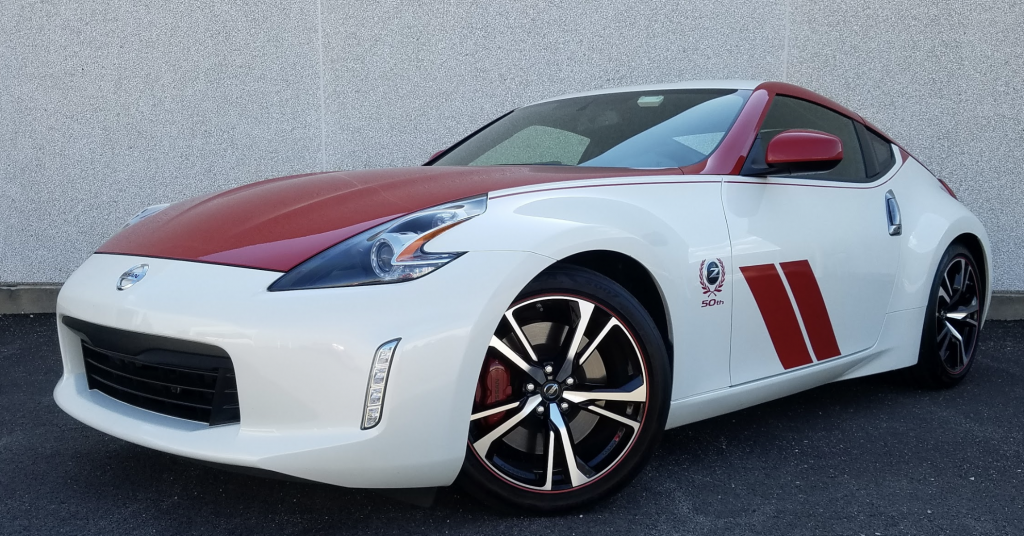 The good: Performance for the money, promise of relative rarity

Among the more than 30 (mostly old and rusty) cars I’ve owned, my 1970 Datsun 240Z stands out as one of my favorites. And lo and behold, Nissan née Datsun is now celebrating it with a 50th Anniversary edition. 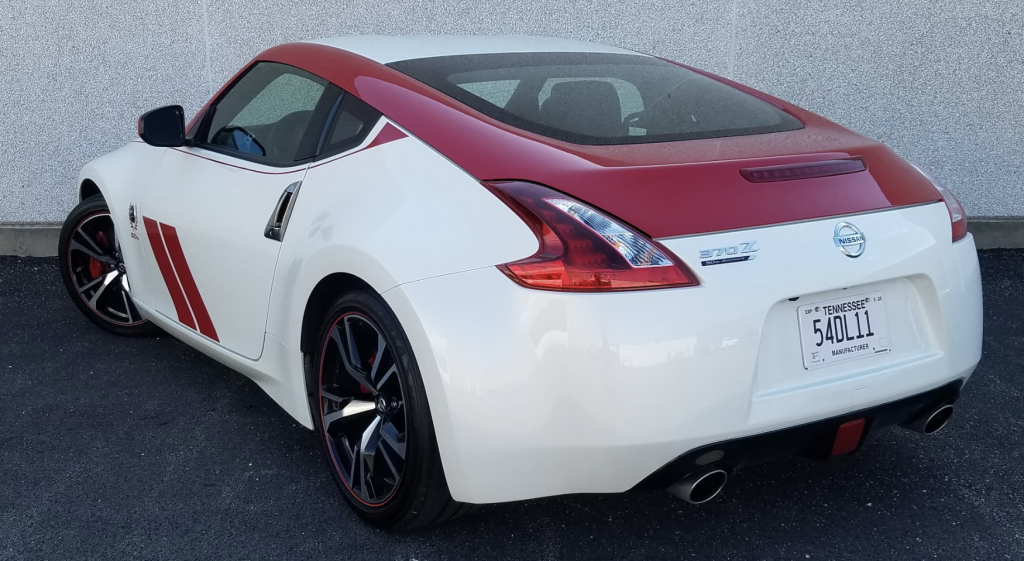 Most noticeable on our 370Z 50th Anniversary Edition tester was the two-tone white and red paint, especially the red slashes on the doors. The package also adds some interior upgrades and unique logos, but deletes front and rear spoilers.

And it’s been a 370Z for quite some time. That model designation was introduced for 2009, receiving a mild update for 2013 – with emphasis on “mild.” Which means the Z has gone more than a decade in much the same form.

That’s a long time in the automotive world, and while in a way it attests to the attraction of the Z, in other ways — both good and bad — it really shows. 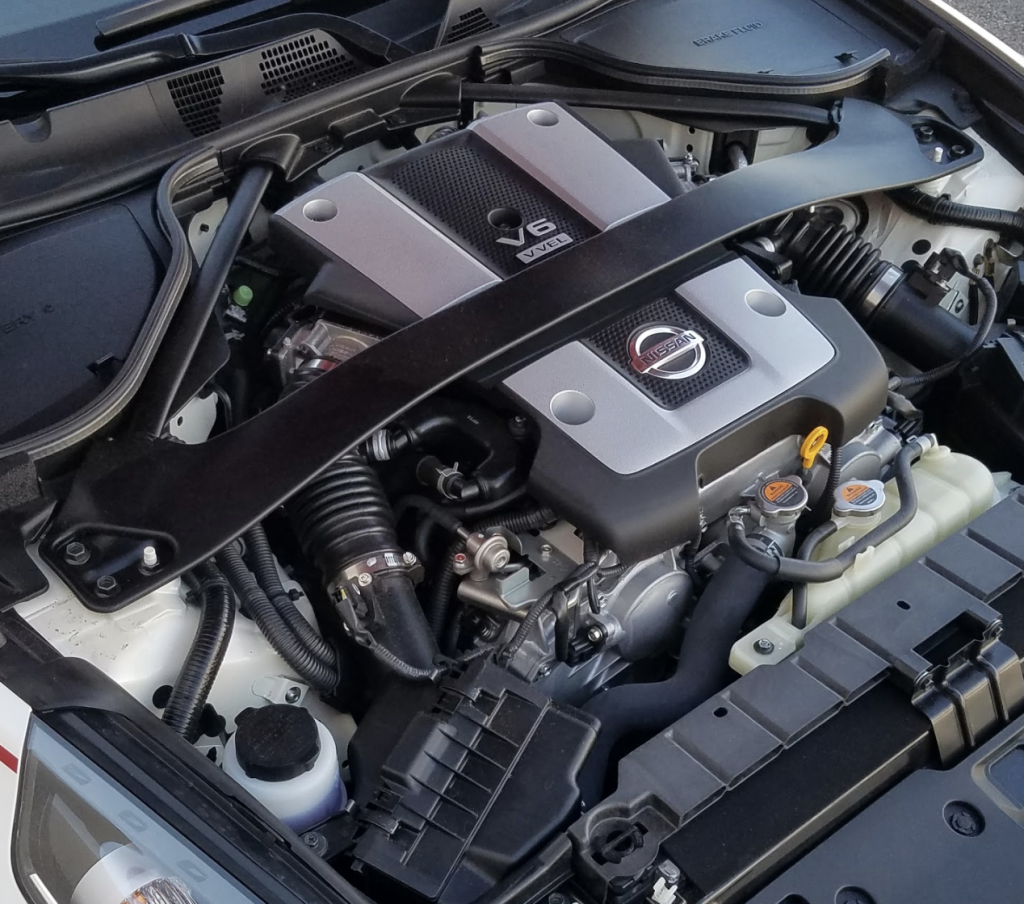 This is what puts the 370Z in a class by itself, at least among moderately priced 2-seat sports cars. The 3.7-liter V6 puts out 332 horsepower, at least 127 more than in any other 2-seat rival, all of which have 4-cylinder engines.

Among sporty/performance cars, the 370Z – essentially a rather traditional 2-seat sports car – is oddly unusual. Other 2-seaters include the Mazda MX-5 Miata and similar Fiat 124 Spider – both convertibles (though the Miata also comes in a folding hardtop version) – and the Subaru BRZ and Toyota 86 – both coupes – but all have just a smallish 4-cylinder engine of no more than 205 horsepower. By contrast, the 370Z carries a 332-horsepower 3.7-liter V6 that puts out a good 60% more power than any of the fours. Certainly V8 versions of 4-passenger rivals such as the Chevrolet Camaro, Dodge Challenger, and Ford Mustang much exceed that, but those aren’t 2-seat sports cars. Note that while Toyota has just introduced its 6-cylinder turbocharged 2-seat Supra, it’s enough upscale in price – starting about $15K more than the Z – that we consider it a “premium sporty/performance car,” putting it in the same category as a Corvette.

And speaking of starting prices, the Z’s ante of about $31,000 puts it in almost a bargain slot just $4K north of a Toyota 86. Note, however, that the 370Z convertible – which started at a somewhat less bargain price of about $43,000 – has been dropped for 2020, so there’s no longer an open-top Z competitor for the Mazda Miata.

While the paint stands out, the 50th Anniversary badging is more subtle.

Our tester started life as a Sport model that adds a limited-slip differential, 19-inch wheels vs 18s, larger brakes, and front chin and rear spoilers to start at $34,715 including destination. Added to that was the $2600 50th Anniversary package, which includes a white/red 2-tone paint scheme, body-side decals, unique wheels, and some specific interior trim while (for some reason) deleting the front chin and rear spoilers, plus $290 50th Anniversary carpeted floor mats, bringing the bottom line to $37,605.

The V6 delivers linear acceleration that’s “good” more than “great,” but certainly stronger than with competitors’ 4-cylinder engines. Although the clutch was light and easy to modulate, the shifter felt rather heavy and notchy when changing gears. Considering the low-profile tires and sporty handling, the ride was decent over our pockmarked Chicago streets. So in all, the 370Z fares quite well in terms of dynamics.

It fares a bit less well in accommodations. 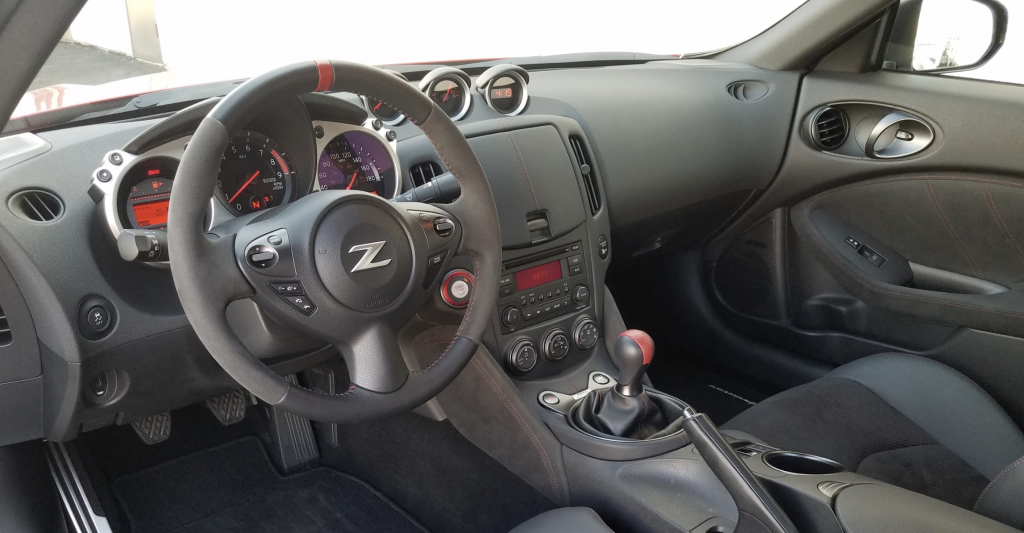 You drop into the low-set seats, but while room is tight, the interior is nicely appointed. Lots of surfaces are padded, and the 50th Anniversary package includes an Alcantara-wrapped steering wheel and leather-appointed seats, with the driver’s getting cushion tilt and lumbar adjustment. In “old school” fashion, the steering wheel only tilts, but the radio and climate controls are simplicity at its finest. 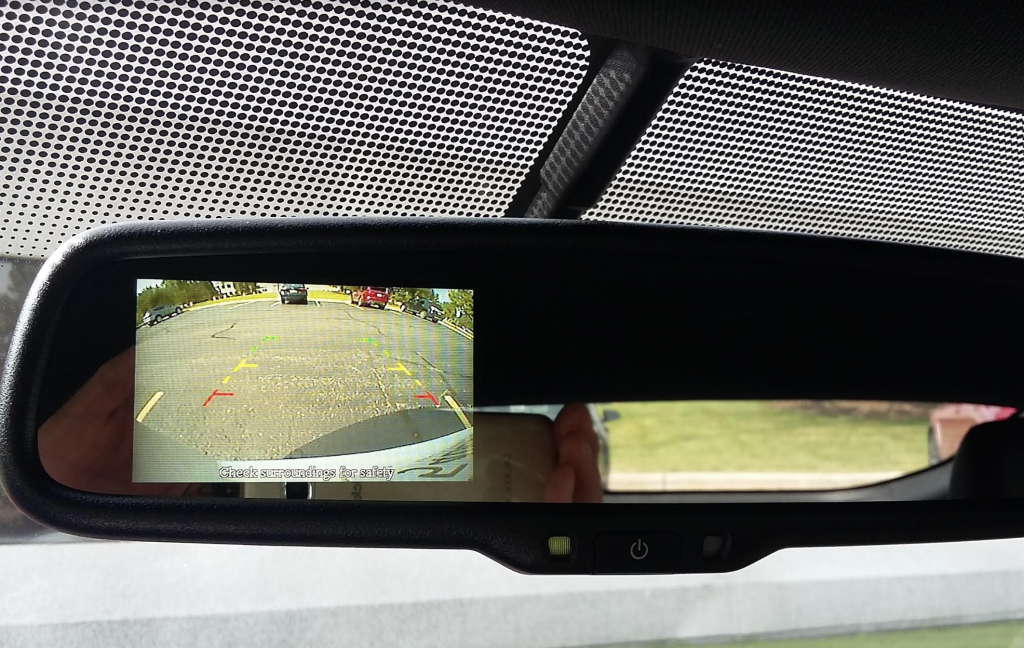 Since there’s no dash screen (you get one if you opt for a navigation system), the federally mandated rearview camera has to display its image in the left corner of the rearview mirror.

Even average-size drivers will drop into the Z’s low-set seats – with limited head and leg room once they do – but that’s to be expected in a sports car. Less expected is the poor rear visibility and the fact it isn’t aided much with the rearview camera’s image being displayed on a tiny 3-inch screen incorporated into the rearview mirror. At least on this model, there was no dash screen (there is if you opt for the navigation system), that space being dedicated to a fairly large covered dash bin – which was nice, as there’s otherwise limited storage space between the tiny glove box, small console box with awkward-to-reach Aux/USB/12-volt plugs, one console cupholder with two more in the door map pockets, and inconvenient bins behind the seats.

Far better was the control layout. In a tip of the hat to “old school,” the audio system had volume and tuning knobs, six physical station-preset buttons, source selection buttons, and a CD player, while the climate system was controlled by three rotary dials (still the best layout), with all controls being within easy reach. But in the same “old school” vein, the equipment list was completely devoid of any high-tech safety features we’ve come to expect, such as forward collision warning and mitigation, blind-spot alert, or lane-departure warning. 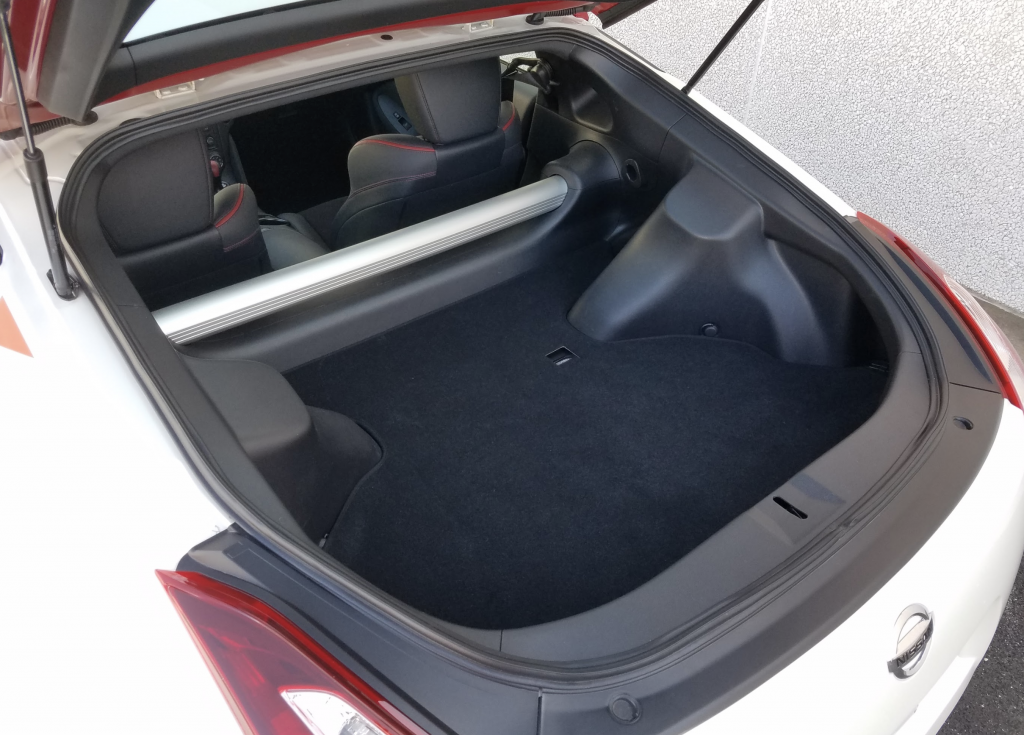 Although the 370Z 50th Anniversary Edition is a hatchback, its utility isn’t great. The compartment is wide at the rear but not very deep, there’s no underfloor storage, and a stiffening crossbar separates the cargo compartment from the cabin, though there is a small “slot” pass-through beneath it.

Although the Z has a hatchback body style, it isn’t the best for cargo space. The cargo area is very shallow with no underfloor storage, and there’s a crossbar at window level that separates the passenger and cargo compartments, which limits what can be extended into the passenger area.

Four-seat competitors such as the Chevrolet Camaro, Dodge Challenger, and Ford Mustang offer not only rear seats but also more cargo space, while also being more modern in terms of features without sacrificing much in terms of performance – and actually adding to it in V8 versions. But if it’s a 2-seat sports car you want, the 370Z still makes for an attractive proposition – as it has for the last 50 years.

The 2020 model year marks the 50th anniversary of the debut of Nissan’s (née Datsun’s) famed sporting “Z car,” and it seems like the current 370Z version has been around for at least half of that time. The mind plays tricks—it’s only been since 2009.

There’s nothing really cutting edge about this Z—man, does that instrument panel ever look old!—and we can’t say much good about the levels of driver vision (low) or highway tire noise (high). Creature comforts and cargo space are spare as well.

However, the 332-horsepower V6 is lively; the 6-speed gearbox is cooperative with short, accurate throws; and the car steers and handles alertly. Plus, it’s fairly cheap for the level of performance. A manual-trans Sport like the one we tested starts at $34,715 with delivery—consider that a 2019 Mazda Miata RF Grand Touring with less room and much less power lists at $34,230—so even $2600 worth of tacked-on anniversary frippery doesn’t break the bank.