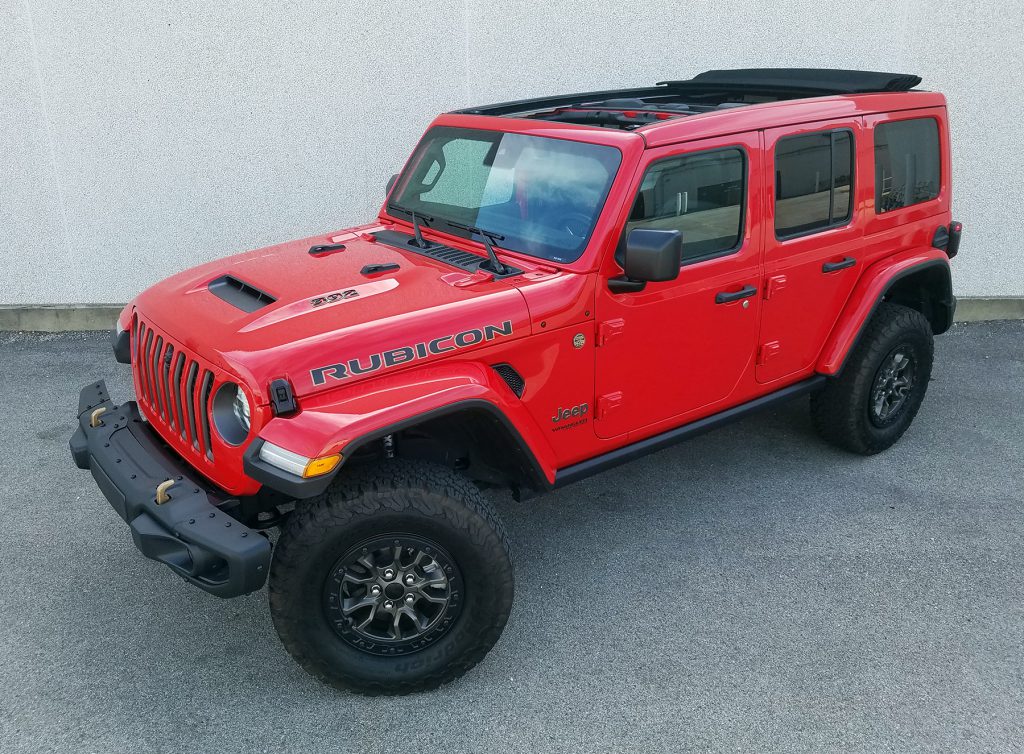 Or it could stand for power now that there’s an available 392-cid (6.4-liter) Hemi V8 in the lineup. 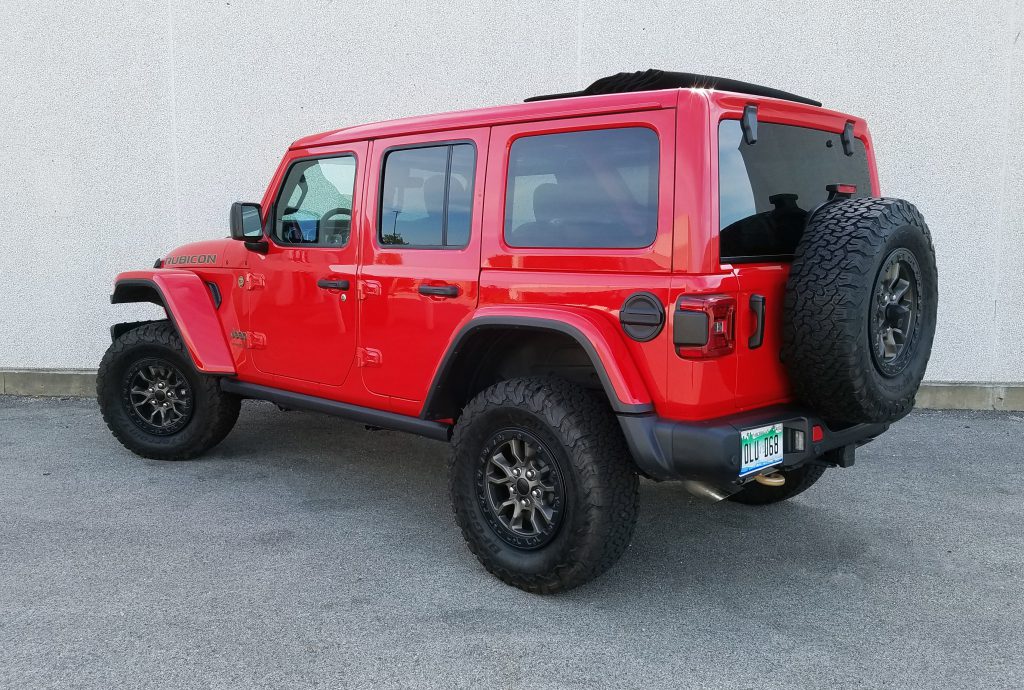 Jeep gives its Wrangler lineup a big infusion of muscle for 2021 with the addition of the Rubicon 392 model.

In a 2021 that was supposed to be about electrification, what with the eTorque mild-hybrid system added to the Wrangler’s 3.6-liter V6 and a plug-in-hybrid 4xe version coming onboard, Jeep slipped this sledgehammer into showrooms too. It’s not the first factory-installed V8 in the off-road icon—when American Motors was Jeep’s parent, it offered its 304-cid V8 in the 1972-81 CJ, Wrangler’s ancestor. Available only on the Rubicon, the most trail-friendly Unlimited for the least friendly of trails, the 392 cranks out 470 horsepower at 6000 rpm and 470 lb-ft of torque at 4300 rpm. It’s an engine that sees a fair amount of use in Stellantis North America products, with horsepower ratings ranging from 410 (in Ram trucks) to 485 (in Dodge Charger and Challenger R/T Scat Packs). In the Wrangler Unlimited Rubicon, where it’s connected to an 8-speed automatic and a 3.73:1 rear axle, it is capable—Jeep says—of going from zero to 60 mph in 4.5 seconds and covering a quarter mile in 13 seconds.

The Rubicon 392 comes standard with a full complement of luxury interior features, including leather upholstery, heated front seats with embroidered Rubicon 392 logos, and an Alpine premium audio system. The center console includes a handy cell-phone-holder slot between the dual cupholders.

In mud or when lumbering over trail obstacles, sometimes slow but steady wins the race, but the Rubicon 392’s extra zip should be appreciated by sand-dune-hopping drivers who want to get gone without getting bogged down. It is the first Wrangler to feature dual exhausts, and the system is fitted with dual-mode control for “quiet” or full-throat “performance” sound (the latter opens up electronically controlled valves). A “Hydro-Guide” hood scoop not only brings in cooling air for the engine but it screens out water from entering the intake in wet conditions. 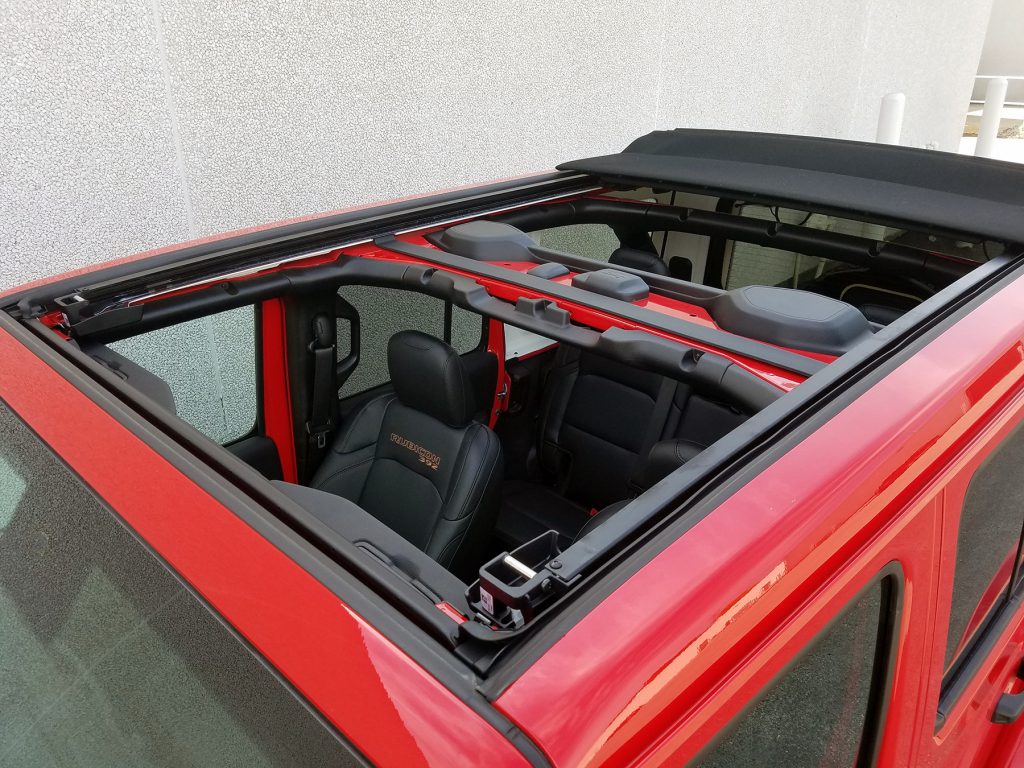 A “Sky One-Touch” power top (a pricey option at $2000) provides an open-air feel for front- and rear-seat passengers.

The powerteam certainly proved itself extremely strong in Consumer Guide’s urban street and highway testing, though it was equally thirsty. This reviewer averaged 13.4 mpg after driving the Rubicon 392 for 117.2 miles, 63 percent of that in city-type operation. The EPA saw this coming: It rates the Hemi Wrangler at 13 mpg in the city, 17 mpg on the highway, and 14 combined. While the engine’s generous torque makes for fast action on the street, it’s interesting to note that the new hybrid’s two electric motors and 2.0-liter 4-cylinder gas engine combine to make exactly the same amount of twist but with the promise of far better fuel economy.

To handle what the V8 does to the Wrangler, the Rubicon 392 gets an upgraded frame and heavy-duty brakes. On pavement, it rides and drives about as well as any current-generation (i.e. since 2018) Wrangler, which is to say ride is a little better than in prior versions, though serious bumps still can jolt passengers with force. Some road noise rises off the 33-inch-diameter mud-terrain tires. The hot rod Wrangler stops well with its heftier binders. Other standard traction and ride/handling components include automatically engaging “Selec-Trac” full-time 4WD, locking front and rear axles, hefty FOX-brand shock absorbers, and electronic disconnect for the front sway bar to maximize obstacle-climbing suspension articulation.

In addition to its singular powerplant, the Wrangler Unlimited Rubicon 392 is also identified by its 17 x 7.5-inch beadlock-capable wheels in a bronze-colored finish, matching tow hooks, and “Rubicon 392” embroidery on the front headrests in the same orange thread used as contrast stitching on seats and other surfaces. It is the first Wrangler equipped with shifter paddles.

A scooped hood and bronze-colored front-bumper tow hooks are among the tip-offs that you’re looking at the most-muscular Wrangler. The 6.4-liter Hemi V8 pumps out 470 horsepower.

Among the half dozen extra-cost options added to CG’s test vehicle were the Sky One-Touch power top and a forward-facing off-road camera. The Sky top basically is a power-operated fabric sunroof that retracts over both seating rows. (A body-color 3-piece hardtop is standard.) It comes with removable rear-quarter windows—and a bag to store them in—a rear-window defroster, and rear wiper/washer. The grille-mounted off-road camera gives drivers advance warning of trail obstacles that may be out of their line of sight and is newly available with the 8.4-inch display screen.

How much, one wonders? Get ready to climb a boulder: $74,995 to start (with delivery) and $78,545 as CG’s tester was equipped—quite a lot for a compact SUV made by a manufacturer from outside our circle of high-falutin’ premium brands. Not even every hard-core Wrangler fan’s devotion will be that unlimited. 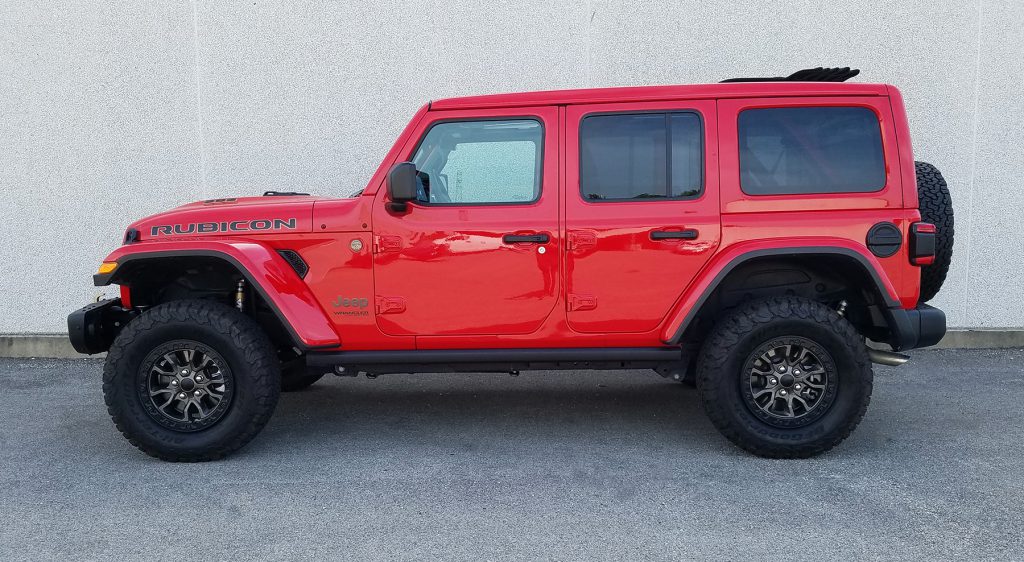 Adding the brawny Hemi V8 engine cranks up the performance, the macho attitude, and the base price of the Wrangler Unlimited Rubicon, which was already one of the most expensive vehicles in the Wrangler lineup. With a starting MSRP of $73,500 and an EPA combined rating of just 14 mpg (which is probably optimistic, given how tempting it is to tromp on the loud pedal), this gas-guzzling extreme off-roader is best considered a weekend plaything. 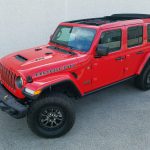 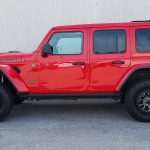 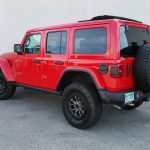 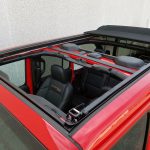 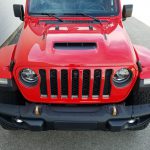 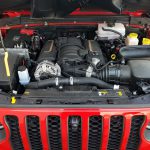 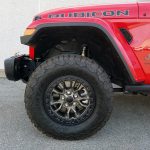 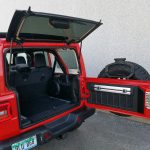 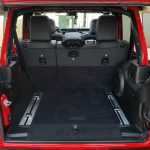 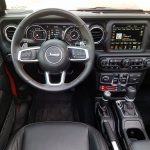 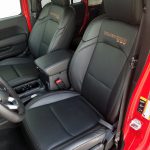 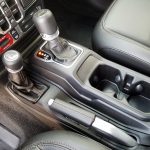 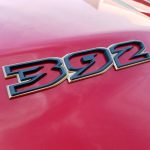 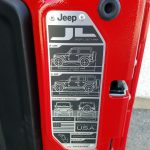 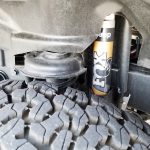