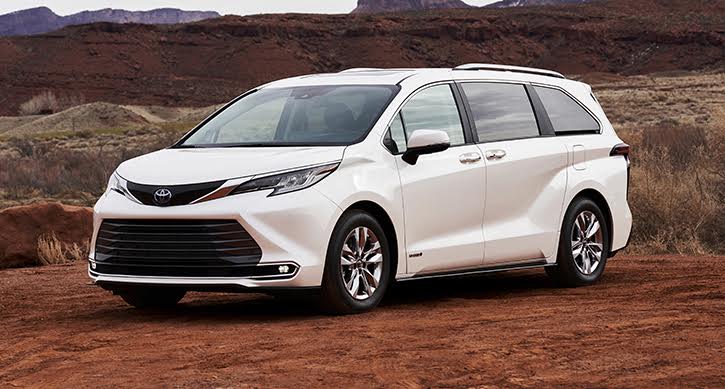 Toyota’s Sienna minivan is currently one of the oldest contenders in its segment, with a basic design that dates back to the 2010 model year. That’s about to change in the near future; Toyota unveiled the all-new fourth-generation version of its long-running minivan today via an online webcast. The 2021 Toyota Sienna is redesigned from the ground up, gaining flashier styling, a topline Platinum trim level, a host of new comfort and safety features, and a standard hybrid powertrain on all models.

Yep… all 2021 Siennas are now gas-electric hybrids. The new standard powertrain is a 2.5-liter 4-cylinder engine paired with two electric motors for a total output of 243 horsepower. Toyota estimates the new Sienna will achieve up to 33 mpg in combined city/highway driving. For the record, the Chrysler Pacifica is the only other minivan to offer a hybrid version. The Pacifica Hybrid is a plug-in-hybrid, which must be plugged in and charged for optimal efficiency, but it does offer up to 30 or so miles of pure-electric driving range on a full charge. The new Sienna is a “regular” hybrid that doesn’t need to be plugged in, but can only drive in pure-electric mode for short distances before the gas engine kicks in. 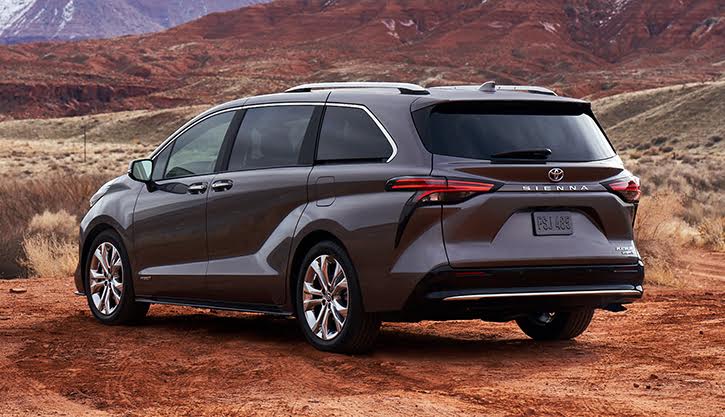 The Sienna retains its available all-wheel drive in addition to front-wheel drive, but the AWD system is now hybrid based; instead of a transfer case and a driveshaft from the gasoline engine, the rear wheels are powered by a separate electric motor. The gasoline engine only powers the front wheels, and the hybrid AWD system can send up to 100 of the vehicle’s torque to the front wheels, or split the torque at a ratio of up to 20 percent front/80 percent rear in slippery conditions. The Sienna can no longer lay claim to being the only minivan available with AWD—the refreshed-for-2021 Chrysler Pacifica is set to offer it as well—but the Sienna will be the only minivan to combine AWD with a hybrid powertrain.

Toyota’s press release stated that the Sienna’s design team “thought carefully about how to combine the practical attributes of a minivan with the emotional desire for having a more personalized driving experience.” The exterior styling is a bit more assertive than before, with curvaceous shapes and pronounced bodyside wheel-flare bulges. The sporty XSE trim level gets more-aggressive styling touches, including dark-finish 20-inch wheels and unique front and rear bumpers.

Inside, a driver-oriented “Bridge Console” center console places the shifter and cupholders within easy reach, while creating a large open area below for a purse or other cargo. The available “Super Long Slide” second-row captain’s chairs are aptly named; they slide up to 25 inches to optimize cargo space or provide limo-like legroom, and can be equipped with an ottoman feature for La-Z-Boy recliner comfort. There is also a stowable middle seat for eight-passenger capacity. 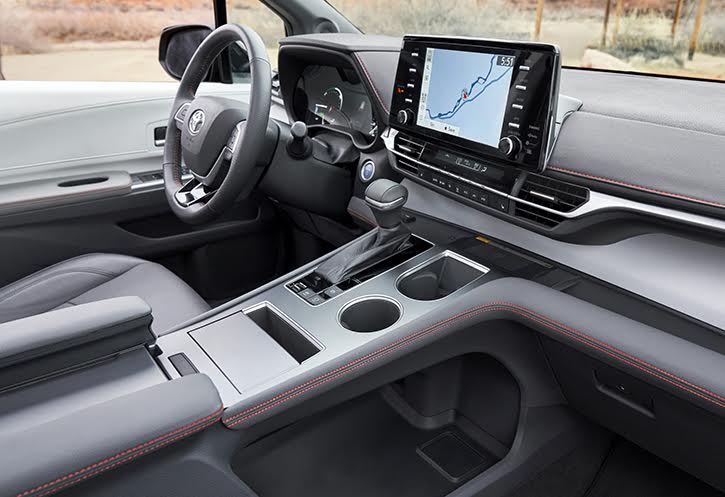 All Siennas will come standard with Toyota’s Safety Sense 2.0 suite of safety equipment, as well as a new Rear Seat Reminder that alerts the driver to check the rear seat for passengers or cargo when exiting the vehicle. Available features include a digital rearview mirror, which can replace the regular mirror’s image with a digital display from the rear camera, in case passengers and/or cargo block the view; Toyota’s Driver Easy Speak feature, which uses the audio-system speakers and a microphone to transmit the driver’s voice to the rear seats; and a Bird’s Eye View Camera with Perimeter Scan, which provides a 360-degree view around the vehicle.

Today’s minivan market is populated by nicely executed family haulers that offer a bewildering array of features—the class leaders are close enough in overall performance, space, and fuel economy that the best choice for you might boil down to which features you value the most.

Though it too offers a broad range of desirable equipment, the ace up the 2021 Toyota Sienna’s sleeve will likely be its standard hybrid powertrain, and the fact that it offers the efficiency of a hybrid powertrain with the all-weather traction of AWD. Toyota hasn’t yet released pricing, so we’ll be curious to see how competitive Toyota can keep the Sienna’s MSRPs while offering the hybrid powertrain across the board.