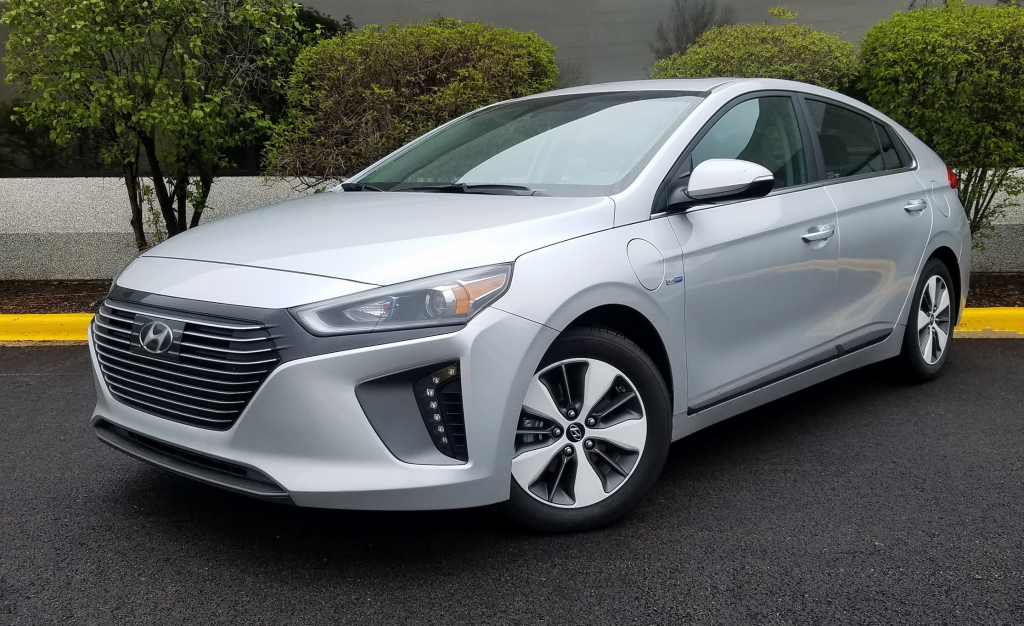 The not so good: Rear visibility, price premium over “regular” Ioniq Hybrid

Electrified motoring is the Hyundai Ioniq’s thing. The compact hatchback’s offerings run from a gas/electric hybrid to a fully electric version, and everything in between.

“Everything in between” happens to be a plug-in hybrid, which was added for 2018, the Ioniq’s second year on the market. Both hybrid variants combine a 1.6-liter 4-cylinder gas engine with an electric motor, a powertrain that generates 139 system horsepower. Note, though, that the plug-in has a larger electric motor that feeds off an 8.9-kWh lithium-ion polymer battery, which permits the car to be driven an estimated 29 miles solely on electric power. 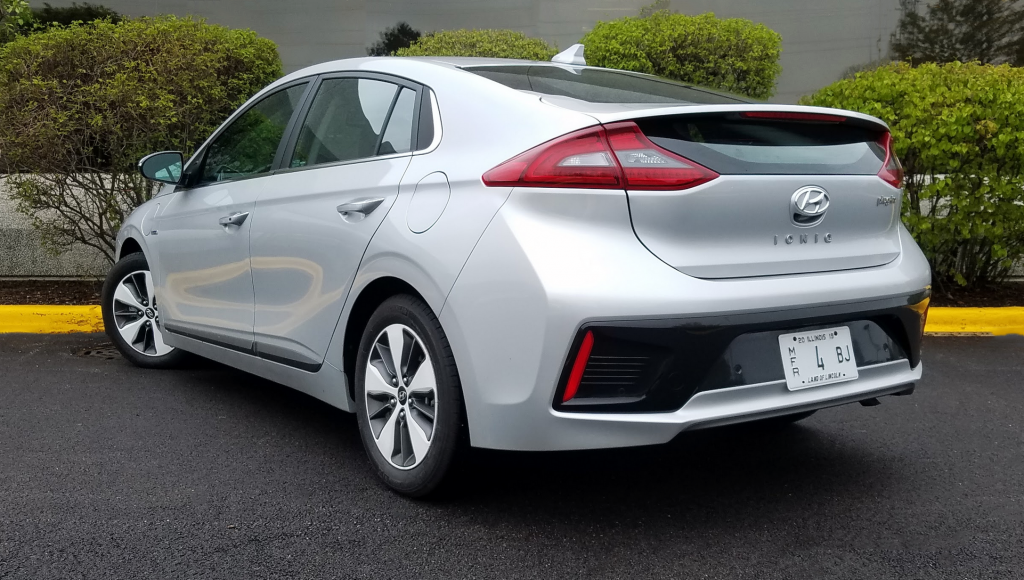 The Ioniq’s styling follows “green car” conventions for the most part–and includes a “split-level” dual rear-window arrangement that, along with the sloping rear roofline, isn’t the greatest for rear visibility.

Like the Ioniq Electric—the sale of which is limited to 10 coastal states—the broadly available Plug-in is presented in two trim levels, base and Limited. Consumer Guide tested a Limited that was priced at $30,235 with delivery to start, but reached $33,335 with carpeted floor mats and Ultimate Package option group. As a partial-electric vehicle, the Plug-in is subject to a $4543 federal tax credit.

Regardless of powertrain, the Ioniq’s clean, straightforward control layout is a plus. The sloping rear roofline cuts into headroom for tall passengers, but the rear seat is otherwise class competitive.

The few changes to the ’19 Ioniq do make themselves felt in the Plug-in. A new driver-attention alert system is standard on the Limited (but is not available on the base car), and new automatic high-beam headlights are included in the Ultimate Package option.

The Ioniq Plug-in Hybrid is powered by a 1.6-liter four-cylinder engine paired with an electric motor for a total of 139 horsepower. The infotainment system includes several helpful screens that provide eco-driving data.

EPA overall fuel-economy projections for the Ioniq Plug-in are 119 MPGe, with a gas-consumption rate of 52 mpg. This driver toggled between all-electric and hybrid drive modes—generally reserving the former for the surface-street portions of his daily commute and using the latter on expressways—and recorded gas use of 60.6 mpg after 220 test miles. (Sixty percent of the stint was carried out in lower-speed driving conditions.) A subsequent test session with shorter trips and more plugging in (thus maximizing pure-electric operation) bumped up our overall average to an impressive 80.2 mpg. Range between fill-ups exceeds 600 miles. 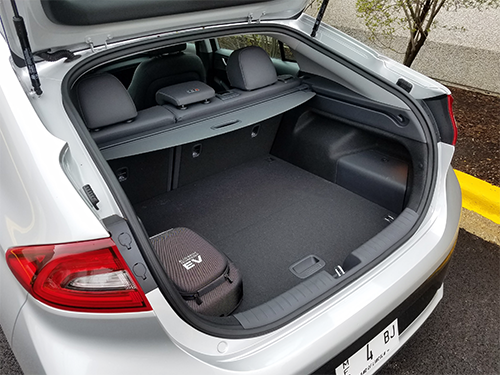 We found the Plug-in would not allow selection of full-electric mode once the battery had dropped to around 15 percent of capacity. With a 240-volt “level-2” charger, full recharge from that point takes an indicated 2.5 hours. Operating as previously described on commutes of approximately 28 miles each way, this reviewer was able to make three trips before needing to recharge to regain full-EV capability.

As an electric, the Ioniq Plug-in is responsive at launch and quiet always. As a hybrid, it is unremarkable in power delivery, but never truly overmatched for on-ramp merging or expressway cruising. While a lot of hybrids and other economy-oriented small cars have gravitated to continuously variable transmissions prone to leisurely power distribution, the Plug-in sports a 6-speed automated-manual transmission with “normal” stepped upshifts that spare the car from droning on as it gradually attains something akin to speed. Plus, steering-wheel-mounted paddle shifters give drivers some say in how the car performs.

Ride quality suffers a little on choppy pavement, but is generally agreeable. Steering is light, and lacking somewhat in road feel, but it’s still as maneuverable as many other cars of its size. The Ioniq is prone to the soft initial braking common to hybrids and electrics that use regenerative braking to capture energy that can be returned to the battery. 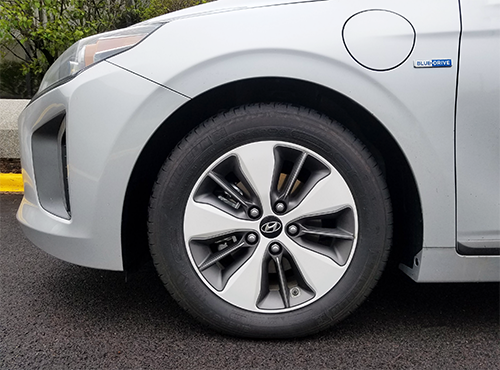 Passenger space is good for the class, with a rear seat wide enough and comfortable enough to accommodate perhaps three teenagers. Driver vision is good most everywhere but, perhaps, to the rear corners. The rear window slopes down to the end of the car, then continues in the vertical space between the taillights. However, like so many other such designs, a rear “spoiler” runs between the panes, obstructing the straight-back view. Drivers face a 7-inch instrument-cluster display with a 4.2-inch trip-computer read-out and graphs that report on the hybrid’s driving-power and battery-charge levels. Audio, climate, and navigation controls display well, and are convenient to reach and use.

For personal-item storage, the cabin boasts a sizeable glove box, a deep covered console box, door pockets, and pouches on the backs of the front seats. Cup holders are found the console and the pull-down rear armrest. Good cargo space exists on a flat floor under the hatch. When additional room is needed, the rear 60/40-split seats fold, though they don’t drop completely flat, and there’s a small gap between them and the cargo floor.

With the Ioniq product line, Hyundai has forcefully jumped into the electrified-vehicle market. The Plug-in makes sure it has all the bases covered.

You’ll pay a premium for the plug-in capability, but the Ioniq Plug-in Hybrid offers notably improved economy over its already-thrifty “regular” hybrid sibling.