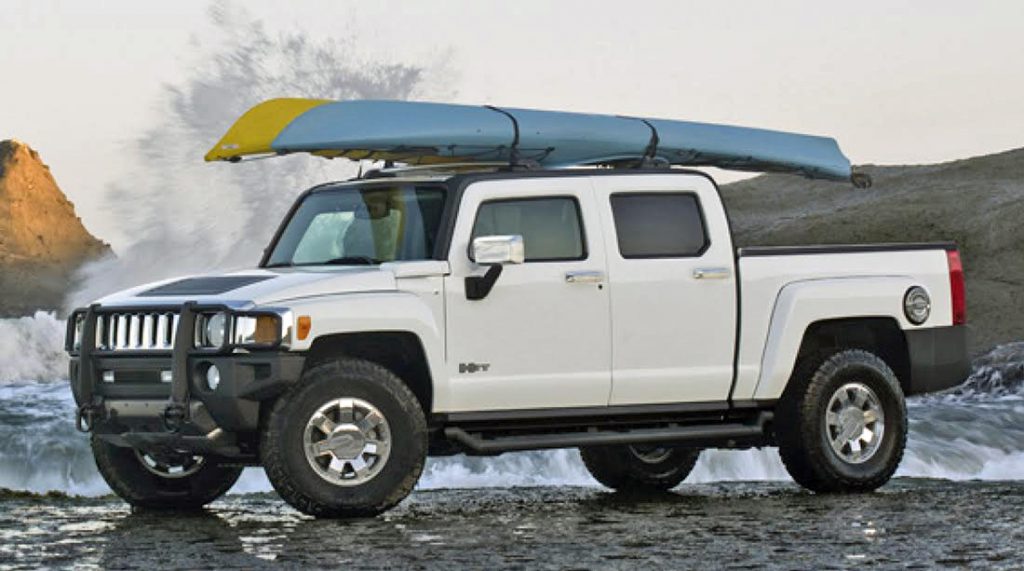 Hummer was badly wounded in 2008, first by the rapid rise in gasoline prices and then by the increasingly shaky economy. Ultimately, though, the brand was a casualty of General Motors’s June 1, 2009, bankruptcy filing, and with it went an intriguing vehicle that was snuffed out soon after its arrival.

GM announced in October 2009 that a Chinese company wanted to buy the Hummer brand, but that deal fell apart the following February. It was soon clear that the 2010 model year would be Hummer’s last. While all this drama played out the broad-shouldered sport-utility brand introduced its last new product, the H3T. At the top of the heap sat the aptly named Alpha.

The 2009 H3T was a crew-cab pickup truck based on Hummer’s smaller H3 SUV wagon. The four-door cab closely followed the H3’s Hummer-signature blocky styling, and the company claimed most components from the B-pillar forward were shared. Other parts like the larger rear doors and back wall of the cab were unique.

The interior also closely followed H3’s main cabin, and had seating for five. The rear bench seat was split 60/40 and could be folded flat to increase in-cab storage. A rearview camera was available.

The five-foot cargo box was a separate assembly with a traditional removable tailgate. Hummer said the bed was similar in design and function to those of contemporary GM full-sized pickups. In addition, a press release stated a wide range of cargo-management accessories specifically designed to fit the H3T’s bed would be available from Hummer and its licensees to support a variety of active lifestyles.

The base H3T ran a Vortec 3.7-liter inline dohc five-cylinder engine rated at 242 bhp. It could be ordered with five-speed manual or four-speed automatic transmissions. Alphas exclusively came with an aluminum-block version of GM’s small-block 5.3-liter V-8 hooked to a four-speed automatic. This setup was good for 300 ponies and 320 pound-feet of torque.

H3T’s ladder-bar frame was similar to the unit used on the H3, but the wheelbase was stretched about 22 inches to 134.2. Front suspension was an independent torsion-bar arrangement, while out back there was a solid axle on leaf springs. The Alpha ran unique suspension tuning and a cast-iron front differential replaced the base truck’s aluminum unit. An optional “Off-Road Adventure” suspension added bigger 33-inch rubber, retuned shocks, locking front and rear differentials, and specific transfer-case gearing. Hummer quoted a maximum tow rating of 5900 pounds for the Alpha.

We were not able to find definitive sales numbers for the Hummer H3T. There is conflicting information online, but it’s possible that total base and Alpha sales for 2009 and 2010 combined were less than 2800 units.

Almost a classic case of exactly the wrong vehicle at precisely the wrong time, the Hummer H3T never really had a chance in the market. A few years earlier—or a few years later—the H3T might have actually been a hit for Hummer. Consider the success of the similar-concept Jeep Gladiator.