JC Whitney: 10 Strangest Catalog Items of the Past 100 Years 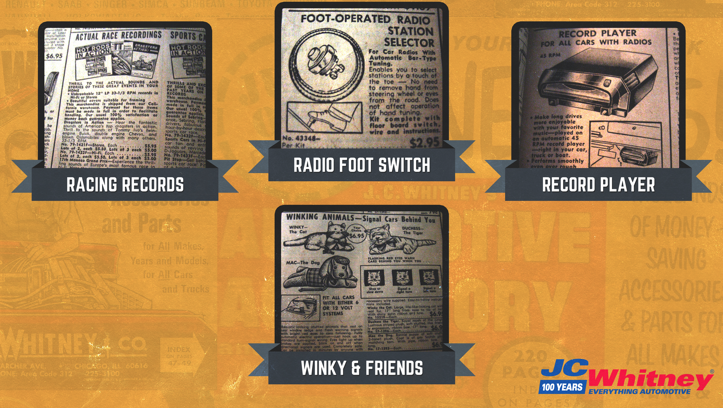 LASALLE, Ill. – February 25, 2015 – JC Whitney, the company with one of the most comprehensive selections of auto parts and accessories in the world, has built its business by offering “everything automotive” to DIYers, enthusiasts and folks just looking to personalize their rides with a little flair. As a result, for 100 years the company has collected a treasure trove of strange and colorful items for sale, thanks to its famous JC Whitney Catalogs.

“As we celebrate our centennial anniversary, it’s only natural to look back at some of the classics found in our catalog,” said JC Whitney President Shane Evangelist. “We found more than a few crazy accessories from the past, especially around the 1960s turn signal stuffed animals and record players, things that make you shake your head and laugh. But we also found a few hidden gems that were ahead of their time, precursors to today’s in-car gizmos.”

By combing through past catalogs of the 1950s and 1960s and speaking with auto enthusiasts, the staff at JC Whitney came up with the following ten creative, unusual and just plain bizarre items that were once for sale:

4 Strange Things I Bought at a Gas Station Today

1. Door Re Me Door Chime

A music box that plays a song melody when the car door opened, this accessory offered an easy way to class up your ride…and surprise that special someone. Available in four different versions, including “Ave Maria,” “Let Me call you Sweetheart,” the “Anniversary Waltz” and “I Love You Truly.” One wonders: would a modern day version of the Do Re Me Chime include “Shake it Up?” Vintage sale price in the 1960s: $4.98 per selection. 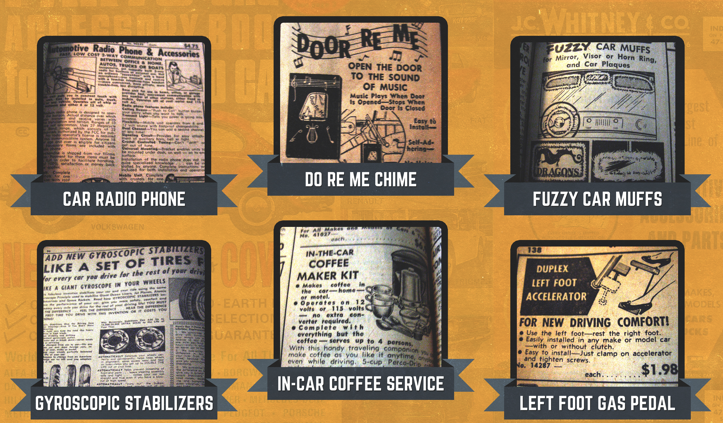 2015 marks the 100th anniversary of the JC Whitney automotive parts and accessories catalog.

Because cold weather makes people loopy enough to put fuzzy warmers on their cars. What was promoted as a “countrywide rage” featured wrapped fuzzy white fur over mirrors, horn rings, visors and car club plaques. It’s like driving a polar bear! Today’s Boston version would undoubtedly include a snow shovel. Vintage sale price in the 1960s: $0.79 – $1.50.

Was this an early version of the aux port? The integrated mp3? No. But it was an interesting idea: hook up a portable record player to the car radio. It played 45s with the claim that it “Performs smoothly even over rough roads, rough curves, even during fast starting and stopping.” There were also full-size record players available for travel trailers during the 40s and 50s.Vintage sale price in the 1960s: $59.95. 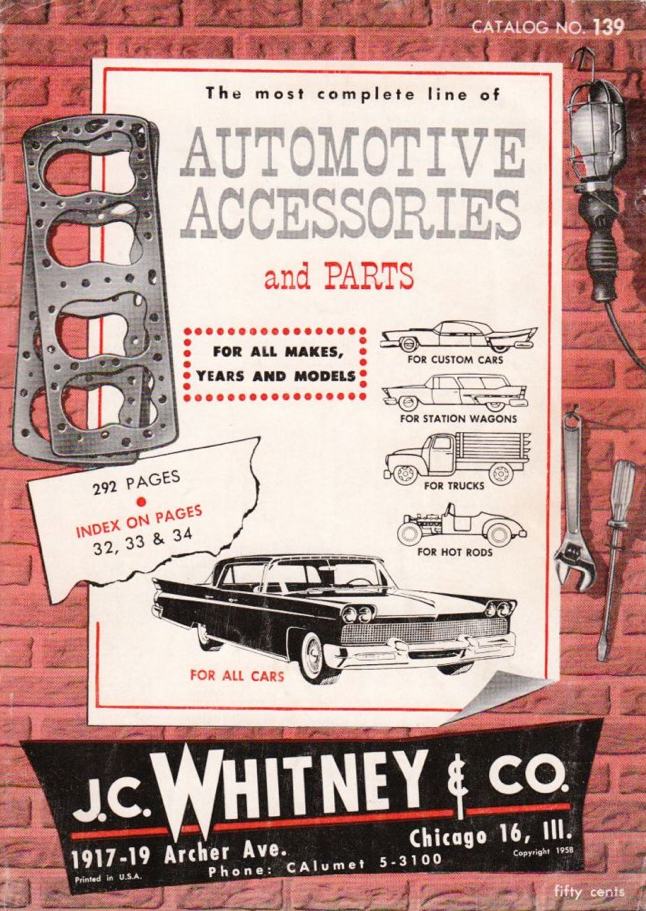 Want classic? The precursor to audiobooks? How about a spoken word biography of Carroll Shelby, or Sir Sterling Moss. You could get it in the JC Whitney catalog and, of course, play them on your on-dash record player. Recordings of famous races at Le Mans, Monaco or Silverstone were included.Vintage sale price in the 1960s: $5.00 – $5.95.

Once again demonstrating that JC Whitney was on the cutting edge of in-car electronics and accessories. Well before the cellular revolution arrived, it took specialized equipment to turn your car, truck or boat into a low-power radio station to conduct business and stay in touch with family. Here was everything you needed, including the transmitter/receiver and antenna to give you a range of up to 10 miles. Unintended benefits included looking like a business mogul or law enforcement officer to passers-by. Vintage sale price in the 1960s for multiple components from $0.65 to $169.00.

Anything that has the word “Gyroscope” in the title is sure to get car fanatics dreaming about the scientific possibilities of whizzing widgets. The stabilizers claimed to increase tire life, automatically balance wheels, iron out bumps, improve handling and do your laundry. Vintage sale price in the 1960s: $19.95 (set of two).

Serious drivers want to know: Why move your hands from the wheel to tune the radio, when you can do it with the tap of your foot? And what’s the difference between this and today’s advanced head’s up display telematics? Vintage sale price in the 1960s: $2.95.

Give the right foot a rest from all that tiring movement! Ad copy boasted benefits like “Rest the right foot” and “easily install on any make or model car…with or without a clutch.” A popular modification for drummers who wanted to practice their footwork while driving. Vintage sale price in the 1960s: $3.98.

9. In the Car Coffee Maker Kit

A brilliant product that never made it to the big time, this idea came around long before Starbucks® was on every corner: this kit served 4 cups of coffee. For the price of a few tall lattes you received all of the items to percolate, pour and organize your cream and sugar…all while securing the coffee maker while you rushed to work. The perfect accessory for cup holders! Vintage sale price in the 1960s: $17.00. 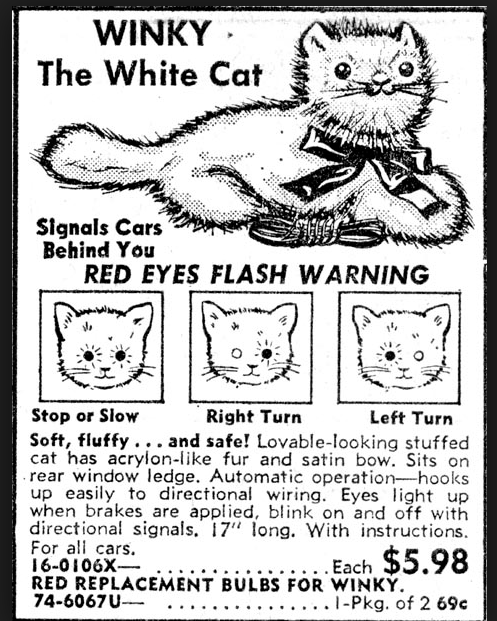 Whatever happened to Duchess and Mac? Just like a musical super group, these plush characters enjoyed some success in the JC Whitney catalog until Duchess and Mac left to pursue solo careers in the automotive turn signal and brake light industry. A reunion has been discussed. Winky was sold in the catalog until around 1987. Vintage sale price in the 1960s: $6.95 each.

What do you remember from the catalogs?

Behind the Shop: 6 Cool Vehicles Waiting For Service