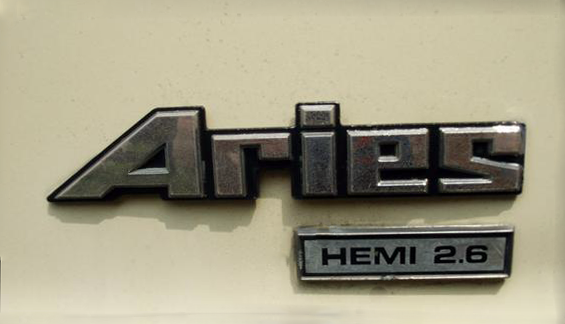 Fender badge of a 1981 Dodge Aries

By the end of the Seventies, it seemed as if the marketing types at Chrysler had given up worrying about protecting legacy brands. In 1978, for example, the company rolled out a small, Mitsubishi-built 4-cylinder Dodge coupe, which the company rather thoughtlessly dubbed Challenger.

For 1981, the Charger name was applied to a front-drive subcompact Dodge coupe based on French (Simca) architecture. Sadly, it wasn’t just muscle-car nameplates that were being resurrected for arguably inappropriate service; revered luxury nameplates were also subject to the same sort of undignified usage. 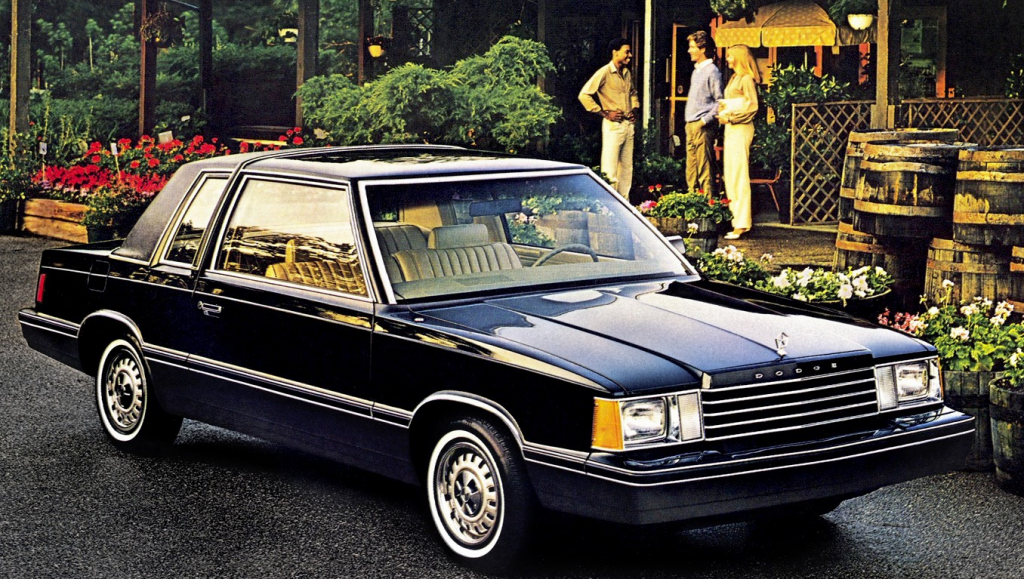 The Dodge Aries (above) and Plymouth Reliant were the first Chrysler products to offer the Mitsubishi 2.6-liter engine.

Recall if you will the 1990 Chrysler Imperial, an awkwardly narrow “premium” sedan riding on stretched K-Car architecture and powered only by V6 engines. Small and underpowered compared to the topline products from Cadillac and Lincoln, the 1990 Imperial was scorned by most luxury-car intenders and, predictably, sold rather poorly.

But as times change, products do too, and it’s unlikely that Chrysler product planners at the time ever considered a return to cheap gas or periods of lower inflation. It likely seemed as if these “heritage” nameplates would never see “legacy-appropriate” service again, so why not exploit their cachet?

However, automotive enthusiasts can be a loyal lot, and are often slow to embrace replacements for beloved products or namesake offerings that fall short of the celebrated originals.

It is with this in mind that I dredge up what must be one of the most bizarre bits of heritage branding ever to see a fender badge: The Mitsubishi-built 2.6-liter “Hemi” 4-cylinder.

Most folks familiar with the Chrysler/Mopar Hemi brand likely recall the 1964-1971 426-cubic-inch V8, famed for its prodigious horsepower output and willingness to rev. The big V8 was found in a number of Dodge and Plymouth products, and is today a highly coveted option by muscle-car collectors. 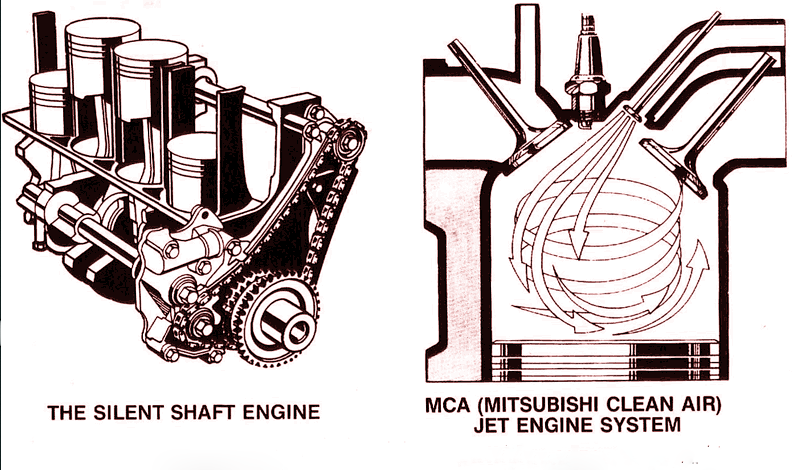 Hemi, as you likely knew or surmised, is short for hemispherical. The 426 earned the Hemi name because the engine’s cylinder heads were roughly the shape of a half sphere. The hemi-head design allowed for improved airflow into and out of the cylinder, but was expensive and time-consuming to manufacture. For this reason, the 426 engine added almost $900 to the price of a 1971 Dodge Charger.

Like many high-performance engines, the engine didn’t survive the country’s move to low-lead gas, and the nameplate was mothballed—until 1981.

It was that year that Chrysler’s K-Cars, the Dodge Aries and Plymouth Reliant, were introduced. Featuring front-wheel-drive design, modern styling, and fuel-efficient powertrains, the K-Cars were exactly the cars Chrysler needed to retain customers who might otherwise have been tempted by General Motors’ hot-selling X-Cars, as well as the latest offerings from Datsun, Honda, and Toyota.

The base K-Car engine was an all-new 2.2-liter four, which mated to either a 4-speed manual transmission or a 3-speed automatic. At 84 horsepower, the 2.2 was no ball of fire, but moved the welterweight Reliant and Aries around with acceptable verve.

But, even given the K-Cars’ humble positions in the Dodge and Plymouth lineups, Chrysler product people saw the need for an optional upgrade engine for consumers looking to move full loads of people and parcel.

With no suitable in-house powerplant available, Chrysler turned to Mitsubishi for help. Because Mitsubishi had been selling a number of vehicles in the U.S. as captive imports, it had the perfect engine available for Chrysler—and it was already emissions certified.

In K-Cars, the Mitsubishi 2.6 cranked out 92 horsepower, a 6-horse bump over the 2.2. More importantly, the Mitsu mill made substantially more torque, most of which came on lower in the rpm band for improved drivability. 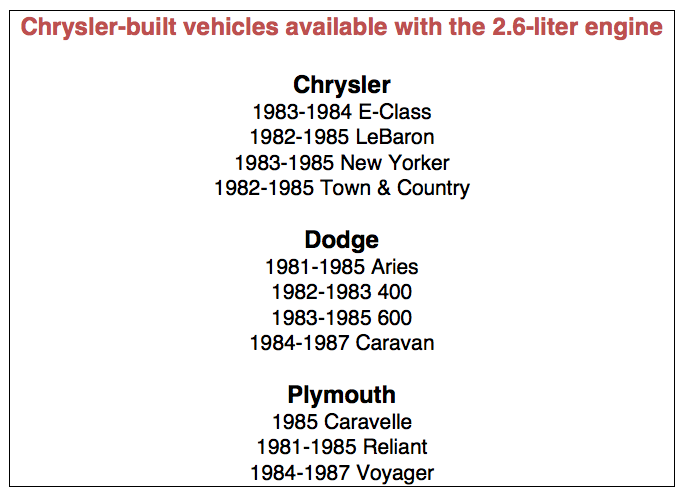 The 2.6 was also cleaner and smoother than the 2.2. Employing Mitsubishi’s branded MCA Jet cylinder-head design, the 2.6 featured a second intake valve that was much smaller than the primary unit. Just before combustion, a blast of high-pressure air (the “Jet” part of MCA Jet) was introduced into the combustion chamber to better distribute the air/fuel mixture that had come in through the primary valve. The result was more complete combustion and a reduction in NOx emissions.

The 2.6 also employed weighted, counter-rotating “balance shafts” that ran the length of the oil pan. The balance shafts were tuned to cancel the inherent imbalance in the engine, resulting in significantly smoother operation than most other large 4-cylinder engines. Mitsubishi would go on to license this technology to Porsche for use in various 924, 944, and 968 models.

While the Mitsubishi engine was nicknamed the “Balancer” by the editors of Consumer Guide, Chrysler marketing folks gave it another name: Hemi. Really. 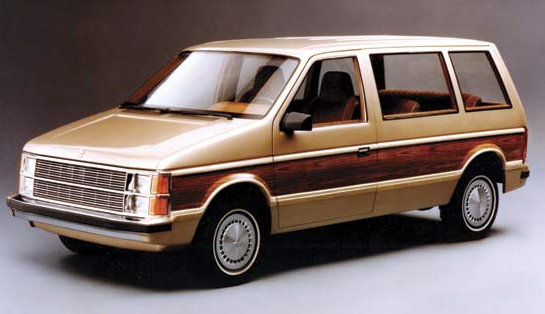 The last Chrysler products to use the Mitsubishi 2.6-liter engine were the Dodge Caravan (above) and the Plymouth Voyager.

Yes, the 2.6 did indeed sport hemispherically shaped cylinder heads, but in terms of its horsepower output and product mission, the optional K-Car engine bore little resemblance to the 426-cid monster V8 retired just a decade prior.

Funny thing, though, was the lack of commitment to branding the 2.6 as a Hemi. While Hemi fender badges were typically seen on vehicles sporting the engine, use of the Hemi name was sparse in advertising and in printed promotional material.

It’s possible the Hemi badge was meant as a point-of-sale tool, and not as something advertising copywriters would necessarily work into ads pushing 6-passenger seating or the benefits of the transverse engine configuration.

All told, the Mitsubishi “Hemi” remained a Chrysler, Dodge, and Plymouth engine staple through 1987. It was replaced by an enlarged version of the 2.2 displacing 2.5 liters. The new 2.5 boasted its own balance-shaft arrangement as well as fuel injection, allowing it to crank out more horsepower and torque than the outgoing Hemi mill.

But while the use of the Hemi name to brand the 2.6 was dubious, the engine itself was a workhorse, and generally understood to be reliable. All told, at least half a million of the engines likely found their way into Chrysler products, though no actual count is available.

For 2003, the Hemi name would again appear, this time affixed to a proper V8 more worthy of the hallowed moniker. The first of the reborn Hemi V8s displaced 5.7 liters and was rated at 345 horsepower— a more fitting follow-up to the legendary 426. And, of course, the new engine wasn’t available with balance shafts.