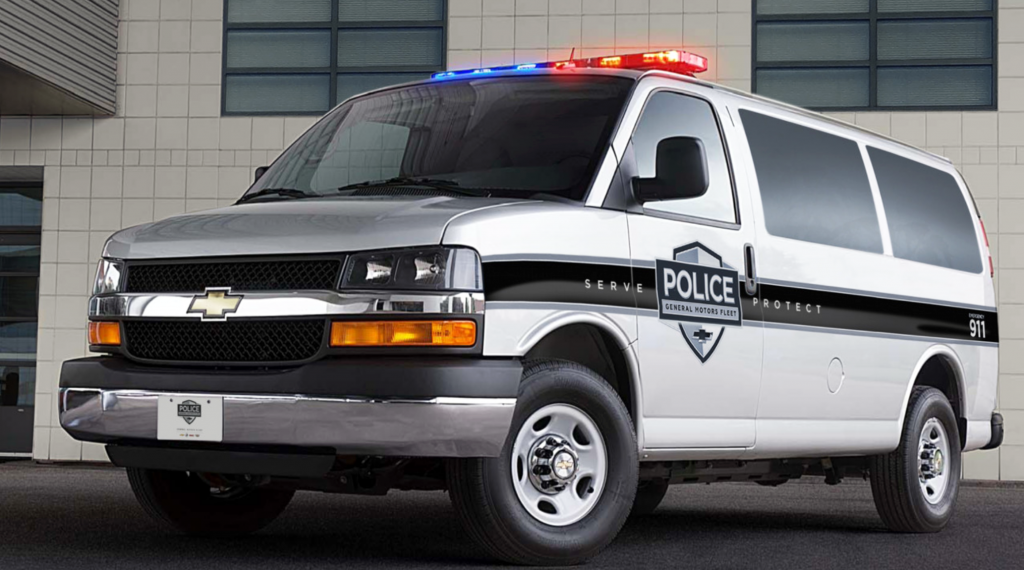 Yes, Police Van! sounds like the name of failed Eighties cop action/drama series, but to General Motors, the van depicted above is an integral part of its 2019 police and fleet-vehicle product portfolio–and much to our surprise, it hasn’t been cancelled yet.

We say surprise, because the Chevrolet Express, and the similar GMC Savannah, have been around since 1995, and haven’t seen any major architectural changes since 2003. Meanwhile, in recent years both Ford and Ram have replaced their traditional American-bred cargo vans with vehicles borrowed from their European operations. 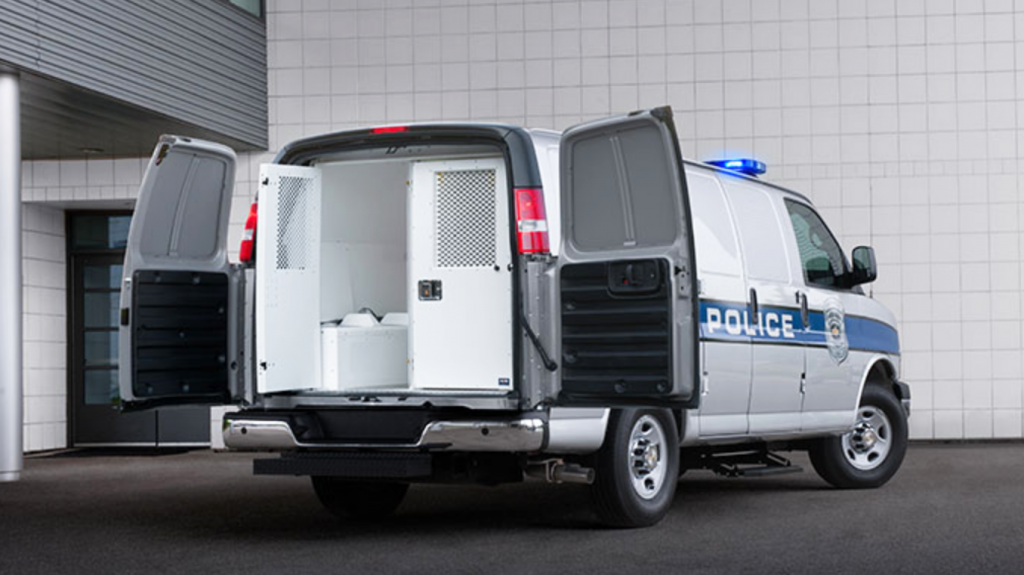 The Chevrolet Express Van is offered to law-enforcement clients in both passenger and cargo versions.

The Ram Van, which was discontinued after 2009, has since been replaced in the Ram lineup by the ProMaster, a front-wheel-drive large van based on the Fiat Ducato. Similarly, Ford phased out most of its long-lived E-Series van lineup for 2015 in favor of new Ford Transit models from its European division. Much to our dismay, neither the ProMaster nor the Transit is offered in police trim. Though the GMC Savanna is still offered for 2019, it is not available in a police-spec version either. 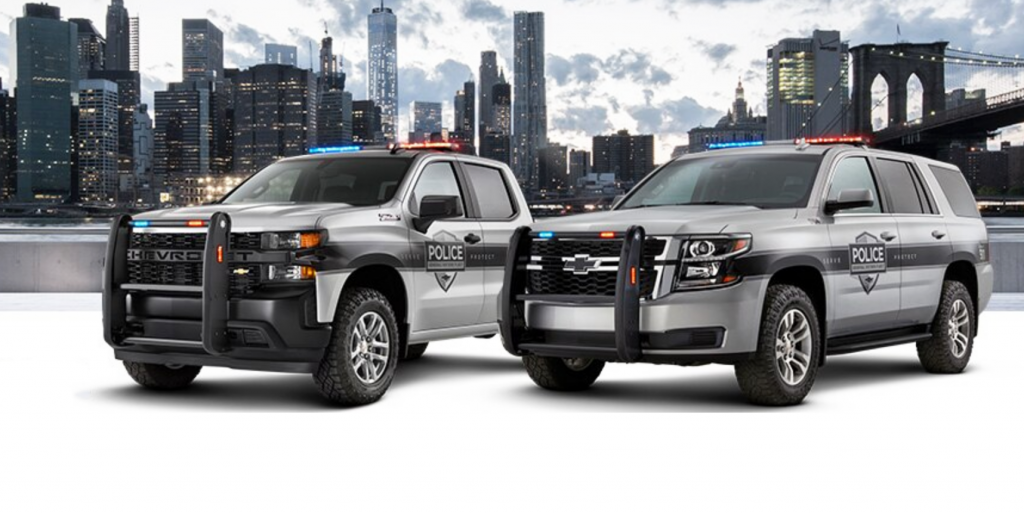 The Silverado (left) and Tahoe account for most of Chevrolet’s police business. Both of these trucks are better equipped for pursuit activity than the largely stock police version of the Express Van.

Unlike GM’s large vans of yore, which were available in a seemingly limitless number of wheelbase and chassis combinations, the 2019 Chevrolet Police Express Van can only be had in three: 2500 short wheelbase, 3500 short wheelbase, and 3500 long wheelbase. The “half-ton” 1500 version of the Express was axed after 2014.

The 2019 Express comes standard with GM’s LV1 4.3-liter V6. This engine is essentially the same mill available in the current Silverado, but it does not enjoy the benefits of the Silverado’s Dynamic Fuel Management System. With almost 300 lb.-ft of torque on tap, the 4.3 should be able to deliver a load of prisoners to court in reasonable time.

Almost certainly more entertaining would be the available L96 Vortec 6.0-liter V8. This burly mill can also be found in GM’s HD-Series pickups, and it makes a healthy 360 horsepower. Most interesting is the optional LWN Duramax 2.8-liter 4-cylinder turbodiesel. Shared with the Chevrolet Colorado and GMC Canyon, the smallish diesel produces only 181 horsepower, but also cranks out a stump-pulling 369 ft-lb of torque. Because all versions of the Express Van are technically heavy duty, the EPA does not provide fuel-economy estimates for them, though we suspect that the diesel-powered versions are relatively economical. 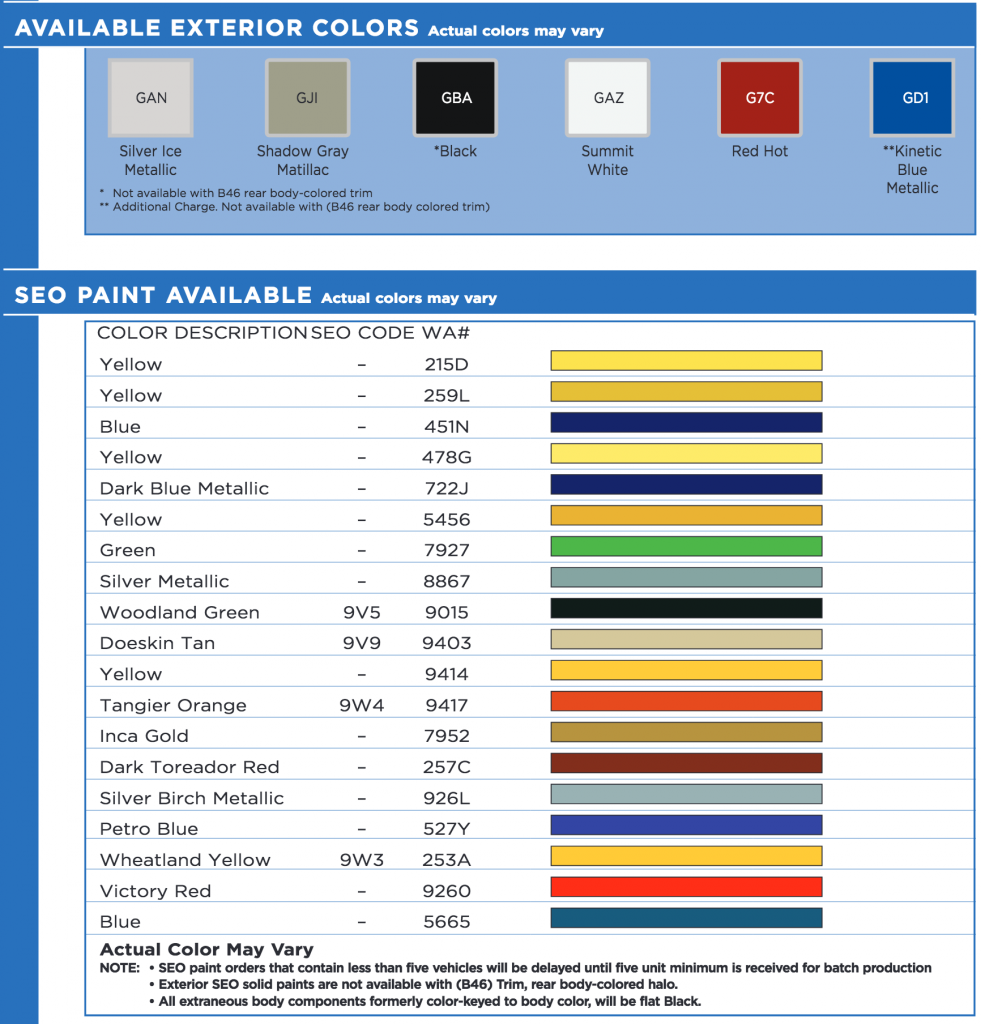 Cool SEO (special equipment option) paint colors for the Express Van are limited to fleet buyers, and must be ordered in batches of five vehicles or more.

How does the police version differ from everyday examples of the Express van? Disappointingly, not in very many ways. For law-enforcement agencies, the apparent benefit of the Chevy Express over competitive products is that it can be ordered and delivered via the same fleet channels as other GM police vehicles. That said, the police version of the Express van is offered in a collection of fun colors not available to the general public.

Also, surprisingly, all versions of the 2019 Express come standard with such safety niceties as a front-obstacle warning system and a lane-departure warning system. Not bad for a vehicle as old as this one.

While we are profoundly dismayed that the Express Police Van is not offered with high-performance brakes or a sport suspension, we get that that’s not really what the van is all about. And, for most law-enforcement fleet buyers, it’s really the only game in town. That said, were one to star in a show called Police Van!, we’d probably watch it. 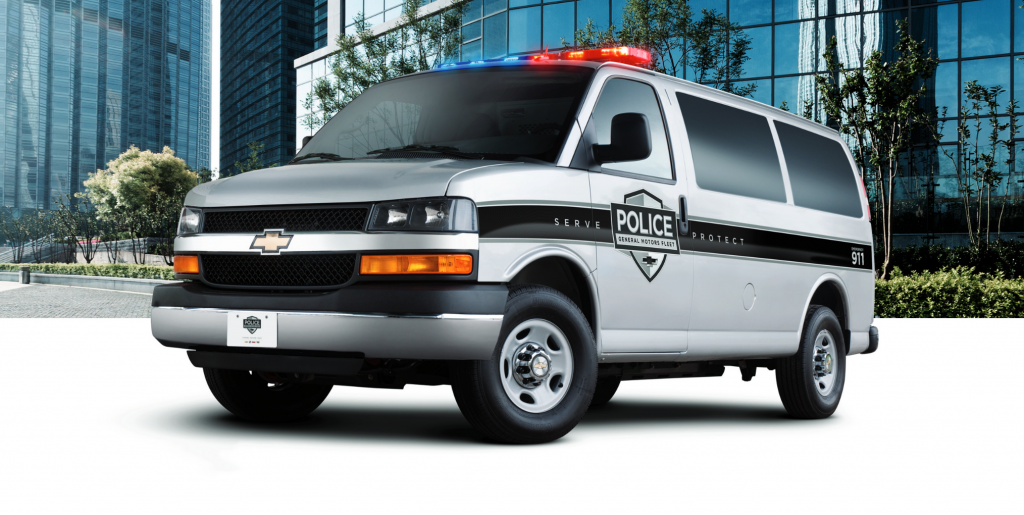 Much to our dismay, the 2019 Chevrolet Express Police Van cannot be equipped for high-speed pursuit.