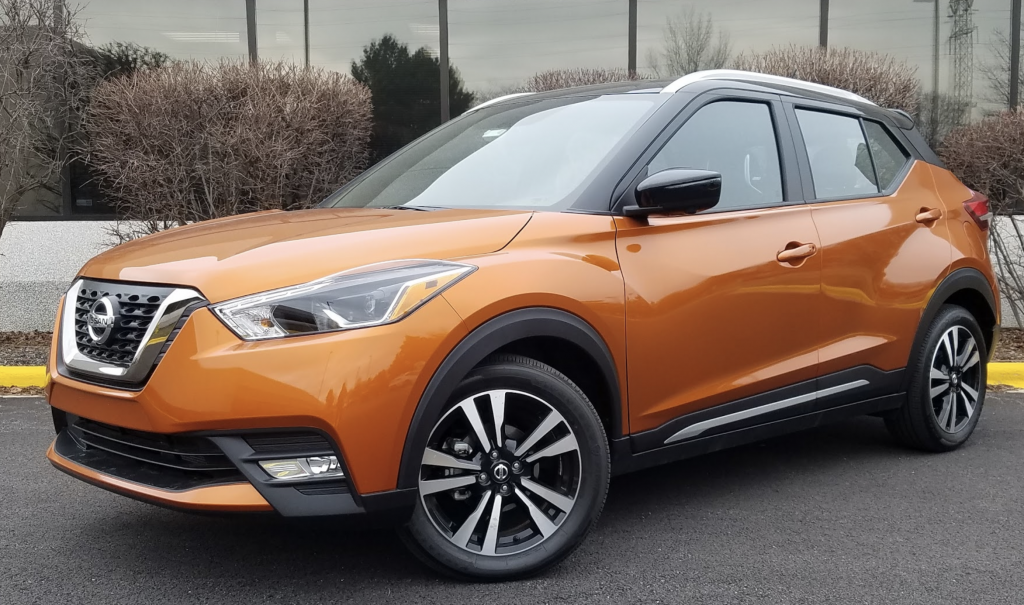 The not so good: All-wheel drive is not offered, cargo floor is not flat with rear seat backs folded

In order to bask in the glow of the red-hot crossover segment, some vehicles that might previously have been considered “cars” are now being pushed as “crossovers.” All are at the small end of the scale and at least share the tall-wagon look (and practicality) the label implies, but lack the all-wheel drive that is ordered on more than half of their full-blooded brothers. Among these new segment-expanders is the Nissan Kicks, which effectively replaced the brand’s odd little Juke last year. (You can read our comprehensive First Spin of the 2018 Nissan Kicks lineup here.) 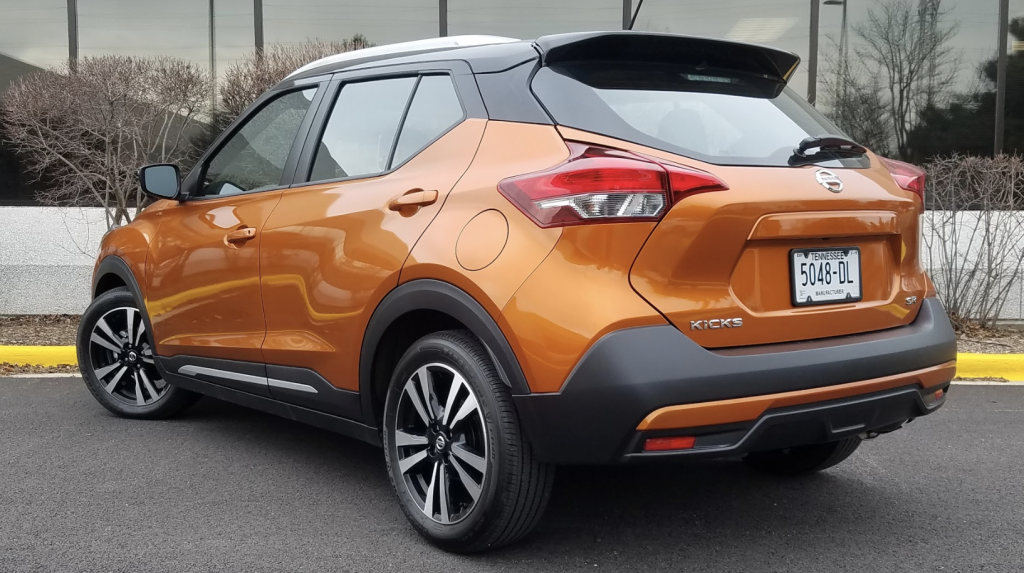 For those who don’t need all-wheel drive, the Kicks offers a lot. (For those who do, Nissan also offers the similar-sized Rogue Sport.) While the only powertrain available in the Kicks is a 1.6-liter four mated to a CVT automatic transmission, we found the combination to offer both great fuel economy and decent acceleration. In this test, our Kicks returned 37.2 mpg in 80-percent highway driving, beating the 36 mpg EPA highway rating — an impressive showing. It also provided a good full-throttle jump off the line and quick (though short of “strong”) kickdown response, both aiding in a fun-to-drive factor augmented by nimble handling. Furthermore, the CVT transmission acted more like a conventional automatic under normal acceleration, with defined “shift points” as speed increased. If there was a dynamic demerit here, it was in ride quality, which seemed a bit stiff on our admittedly bumpy Chicago-area roads.

Two high-end features contained in the SR’s Premium Package ++ are a 360-degree camera system (easily activated by a button at the top right of the screen), and a Bose audio system featuring front headrest-mounted speakers.

Forward collision warning with automatic emergency braking – probably the most valuable high-tech safety feature – along with a host of other features are standard in the base S model’s $19,585 (including destination) starting price. The $21,295 SV adds such items as Apple CarPlay/Android Auto, satellite radio, keyless access and starting, remote start, blind spot and rear-cross-traffic alert, and 17-inch alloy wheels (in place of 16-inch steel). Opting for the top-line $21,915 SR tested brings a 360-degree camera system and some sporty interior and exterior touches. Added in our tester was the $1000 SR Premium Package ++ that includes a Bose audio system with front headrest speakers, leather-like Prima-Tex upholstery, and heated front seats. In all, an impressive collection of high-end features for the price.

Hard plastic dominates inside — even more so on lower trim levels — but some nice touches on the SR keep the interior from looking cheap. There’s a decent-sized glovebox but no console box, though armrests pivot down from the seat backs, and the console contains a large forward bin under Aux/USB/12-volt plugs, two cupholders (plus another at the rear next to two more USB ports), and a shallow bin, the combination providing for adequate storage space.

Achieving that value equation, however, requires a little cost cutting. One area this is evident is in the interior. There’s no tachometer in the instrument cluster (not really needed), no console box (though there are fold-down armrests), and not all touch surfaces are padded, but there’s a decent amount of cabin storage space overall and the look never comes off as “cheap.”

Visibility is good except to the rear corners, where the standard rearview camera helps — and the SR’s 360-degree cameras help even more — when backing. Shorter drivers may appreciate that the driver seat can be raised way up, improving their view over the steering wheel. 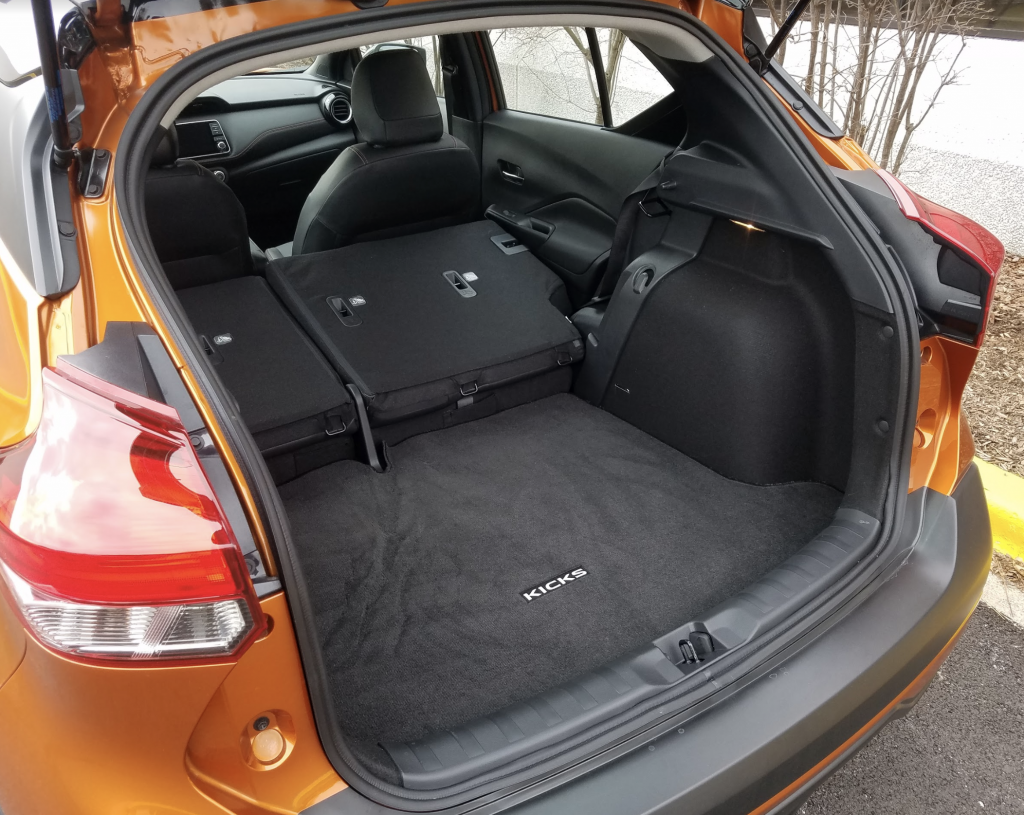 Cargo space in back is good, but would be far better if the folded rear seat backs rested level with the cargo floor rather than resting several inches above it, and if there were also some added storage space beneath the floor — which there isn’t.

As the subcompact-crossover label implies, passenger and cargo space are quite good. There’s plenty of room inside for four adults, and there’s also plenty of space for stuff in back, aided by a fairly upright rear window. There are two downsides back there, however: The folded rear seat backs rest several inches above the level of the cargo floor (which prevents long items from being easily slid forward), and there was virtually no underfloor storage.

It will be interesting to see how the Kicks and other front-drive “pseudo crossovers” – such as the Toyota C-HR and compact Kia Niro — fare in the marketplace. For while they may not satisfy those looking for winter-weather traction, they sure beat regular cars for cargo space without sacrificing much in the value department.