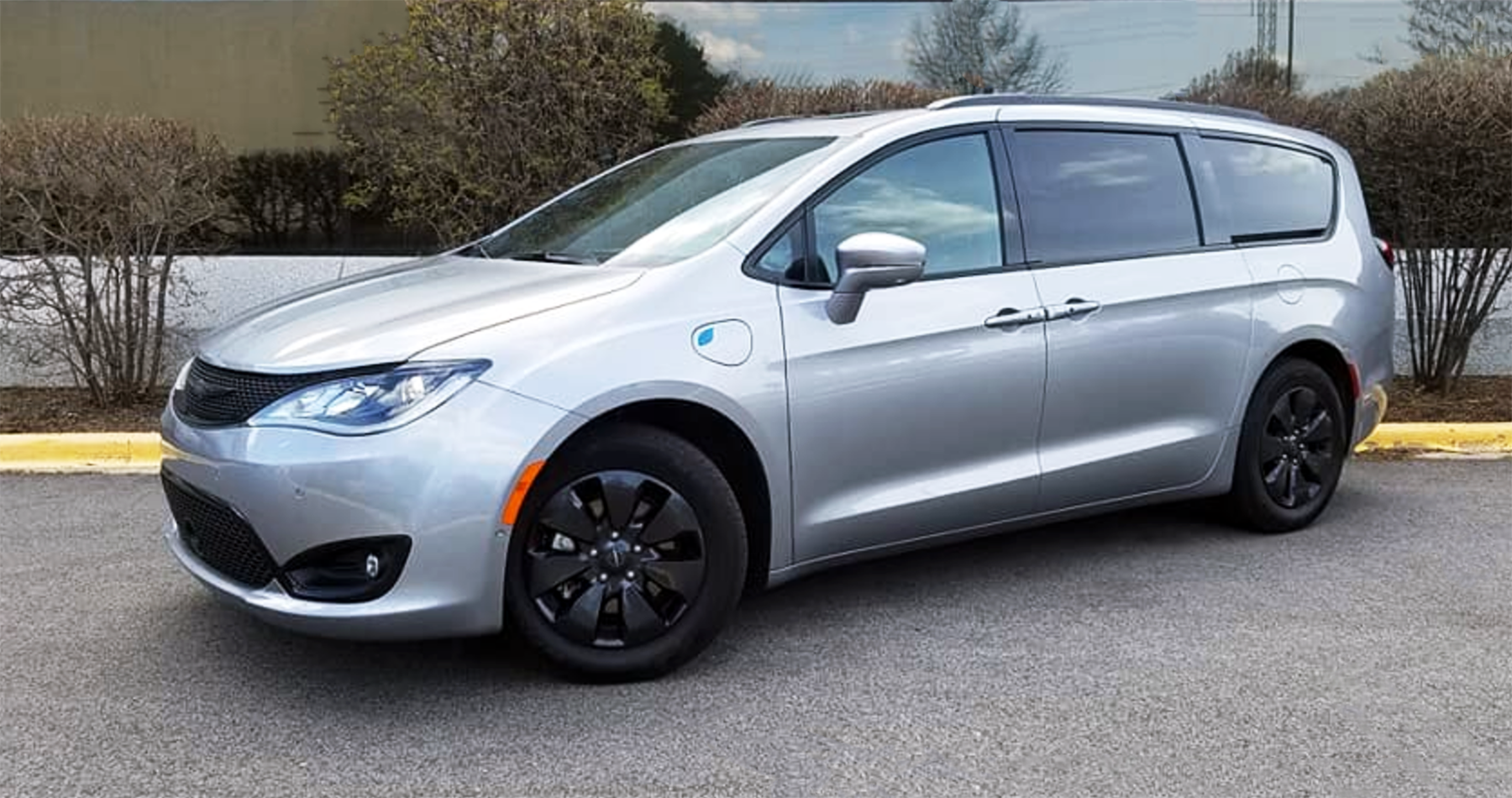 The not so good: Chrysler’s signature Stow ‘n Go second-row seats not available on Hybrid models

These days you might have a better chance of seeing a high-performance hybrid supercar than you would a hybrid family hauler minivan. A number of makers of high-end and outright exotic GTs and sports cars have embraced blending internal-combustion and electric power for eye-popping outputs. But for now, there’s only one minivan using that motivating mix: the Chrysler Pacifica. We say “for now” because the redesigned 2021 Toyota Sienna, which is slated to go on sale late this year, will come exclusively as a hybrid—albeit a conventional hybrid instead of the Pacifica’s plug-in-hybrid configuration. We should also note that the Pacifica is getting a substantial freshening, with the addition of available all-wheel drive, for 2021. 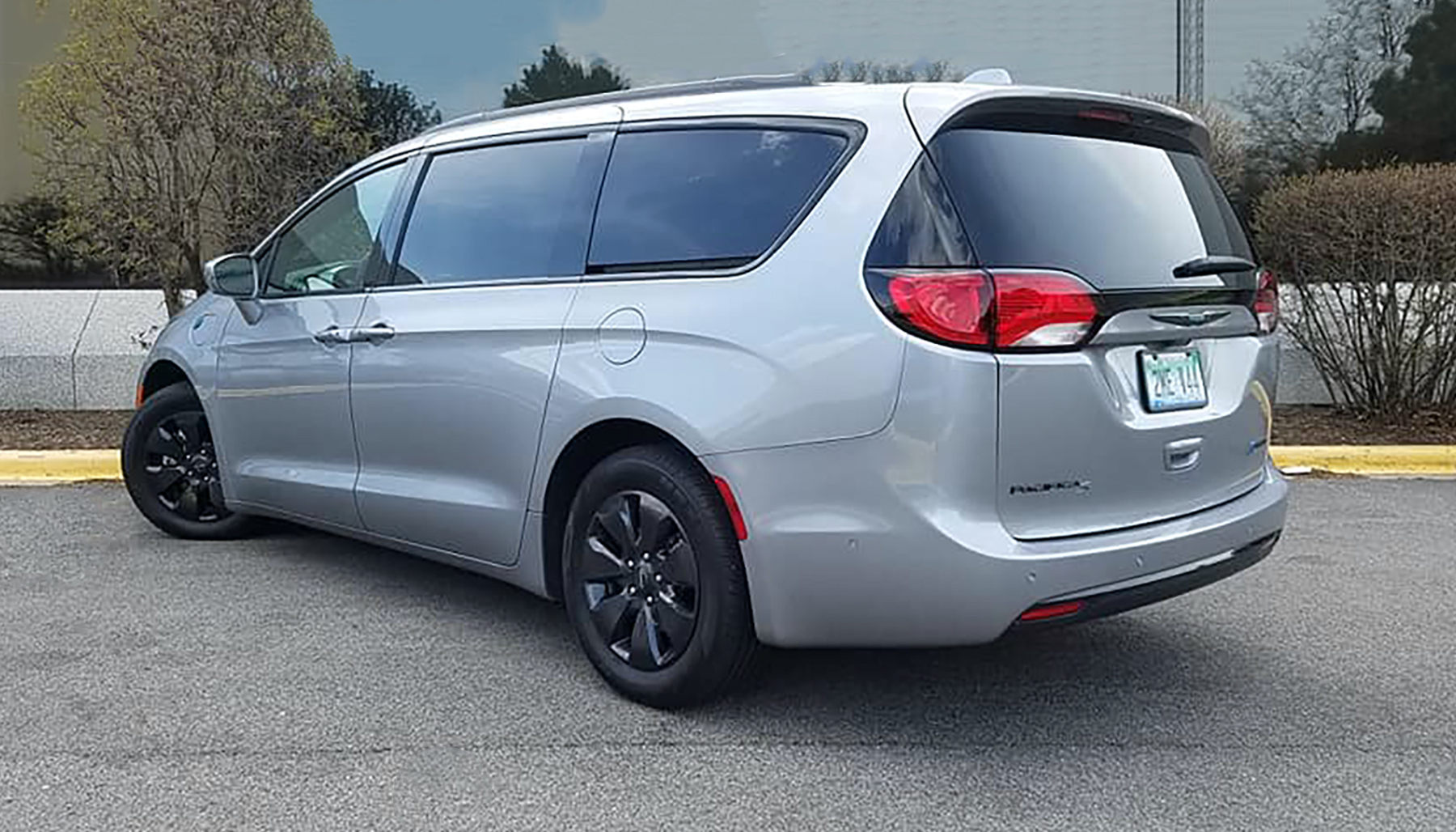 The Pacifica Hybrid itself is nothing new; it has been in the product mix since 2017, when Pacifica replaced the Town & Country as Chrysler’s minivan. What is new for the plug-in hybrid in 2020? Well, there’s the grille surface. Plus, there’s been some shuffling of trim levels. Otherwise, the Pacifica Hybrid is the same 7-passenger, 260-horsepower it has been—and it’s still an important element in what makes Pacifica the Consumer Guide “Best Buy” pick in the minivan class.

Pacifica Limiteds have upscale cabin trim and a wealth of standard features, including a heated steering wheel, heated and ventilated front seats, and a Uconnect navigation/infotainment system with an 8.4-inch touchscreen. The center console houses dual cup holders, a storage bin with a sliding cover, and 12V and USB charging ports.

There are six flavors of Pacifica Hybrid, the Touring, Touring L, and Limited, plus thirty-fifth-anniversary editions of the Touring L and Limited, and a Red S version. Base prices with delivery extend from $41,490 for a Touring to $50,635 for the Red S. CG tested a Hybrid Limited that started at $47,240 was optioned up to $51,025. The 2020 test van was outfitted much like the one CG editors drove in 2019, including the extra-cost S Appearance Package (black, not red), Advanced SafetyTec Group, and panoramic sunroof. However, an upgrade to a 20-speaker Harman Kardon system and the Uconnect Theater with streaming and DVD video gear were both tossed into the ’20 at no charge. 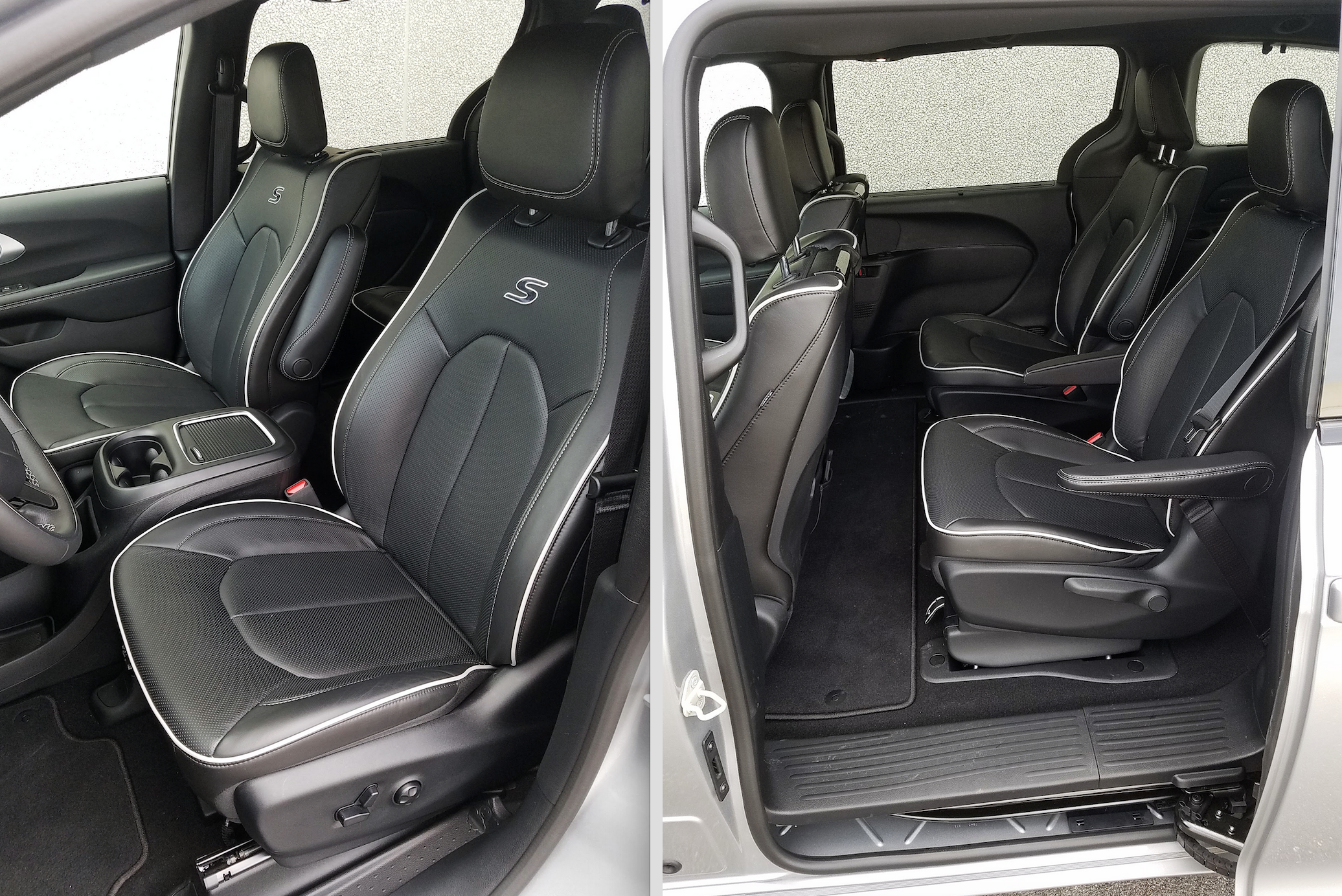 Inside, the S Package adds Nappa leather seats (with “S” logos on the front seatbacks). Though their underfloor battery hardware means that Pacifica Hybrids can’t offer Chrysler’s Stow ‘n Go second-row seats, the seats still slide fore and aft to favor second- or third-row legroom. Just visible on the front seat backs are the integrated video screens for the Uconnect Theater entertainment system; it’s included at no charge and comes with wireless headphones and remote controls.

Chrysler pairs a less-powerful version of the corporate 3.6-liter gas V6 with twin electric motors to generate the aggregate 260 ponies. An “electrically variable” transmission functions without the feel of stepped gears. EPA estimates for combined city/highway driving are 82 MPGe and 30 mpg of gasoline consumption.

We experimented with different operating styles this time to get a feel for how they might affect mileage. One editor who drove about two thirds of our test miles regularly charged the 16-kWh battery. Fifty-five percent of his distance was covered with the van operating in electric mode and at the end of his stint his gas use worked out to 48.5 mpg. A second editor’s shorter run of not quite 60 miles used just a single charge, and 66 percent of his run was under electric power, which stretched fossil-fuel economy to 68.33 mpg. (However, his gasoline use just for the miles when the gas engine was working averaged 23.55 mpg.)

Fully charged, the Pacifica Hybrid is good for an estimated 32 miles of electric operation before it has to switch over to the gas engine—though the V6 will jump in when a high demand for power arises. For instance, the second of our editors mentioned above started out with an indicated 98-percent charge and went 28.5 miles—mostly in steady but speedy highway driving—before the gas engine took over, but an instrument readout showed 26.4 of those miles were driven electrically. Depletion of the charge is relatively slow below 60 mph, but begins to vanish pretty rapidly at higher speeds. The Hybrid is capable of easy, quiet Interstate cruising, but standing-start performance is a little tamer than in all-gas models. Transitions from electric to gas power are fairly subtle.

The Pacifica rides and handles well, and the Limited is a well-appointed minivan. Interior materials have a premium look and feel. The instrument dials and the 8.4-inch touchscreen for the convenient Uconnect 4C infotainment system show several hybrid-specific readouts related to power use and range. Personal-item storage choices are numerous and varied—if you can’t find a place for it in the Pacifica, you probably don’t need it.

The Pacifica Hybrid is powered by a 3.6-liter V6 engine paired with twin electric motors; the combo puts out a total of 260 horsepower. The electric charge port is located on the driver’s-side front fender.

Abundant leg- and headroom greets passengers in the front- and middle-row seats, with easy passage to the third row between the second-row buckets. The rearmost seats are adult-friendly. With the rear seats retracted and the middle seats removed (the placement of the hybrid-system battery prevents them from being folded into the floor), a cargo area of 140.5 cubic feet opens up.

Convenience and comfort are the least anyone can ask of a worthwhile minivan. The unique difference of the Pacifica Hybrid goes a step beyond.

By making shorter individual trips and plugging in to charge the battery between those trips, we improved our 2020 Pacifica Hybrid test vehicle’s average fuel economy compared to the nearly identical 2019 model we tested previously. If your lifestyle includes similarly short trips and permits frequent plugging in to maximize pure-electric operation, you can achieve similarly excellent numbers… but even in “regular” hybrid mode, the Pacifica Hybrid is a laudably efficient minivan. 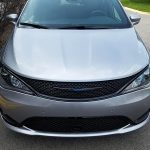 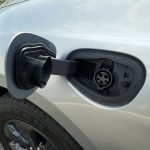 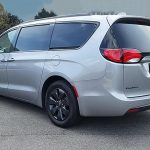 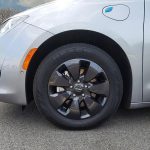 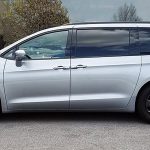 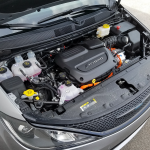 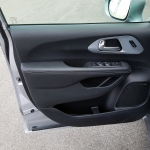 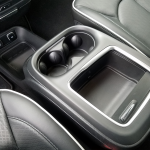 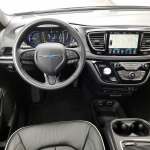 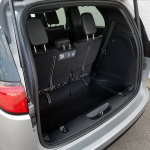 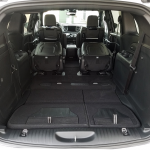 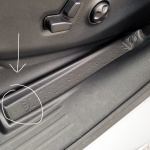 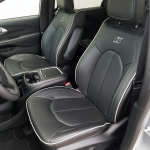 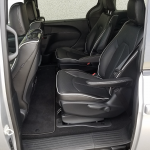 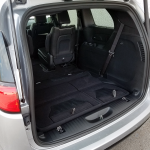 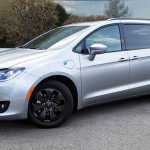