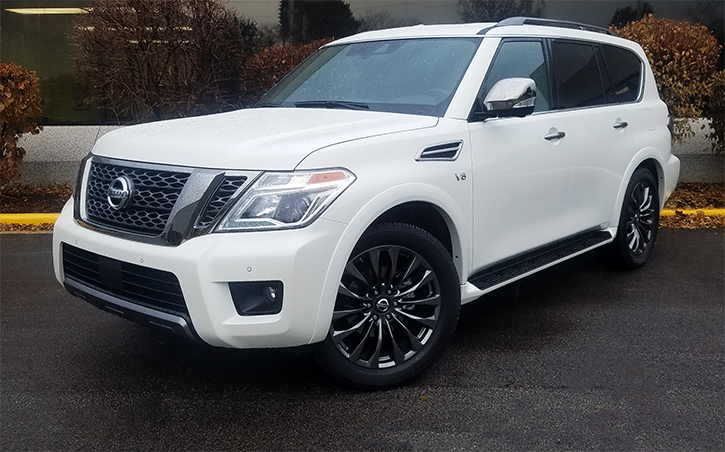 The not so good: Fuel economy; feels a bit dated next to newer-design class rivals

You could be excused for thinking the Armada comes with one of those new almost-self-driving systems because it sure seems like Nissan’s large SUV is running on autopilot. Since its full redesign for 2017, the 3-row V8 sport-utility has hardly deviated from its initial path, spreading a few standard convenience and technology features down the line but avoiding any major changes. 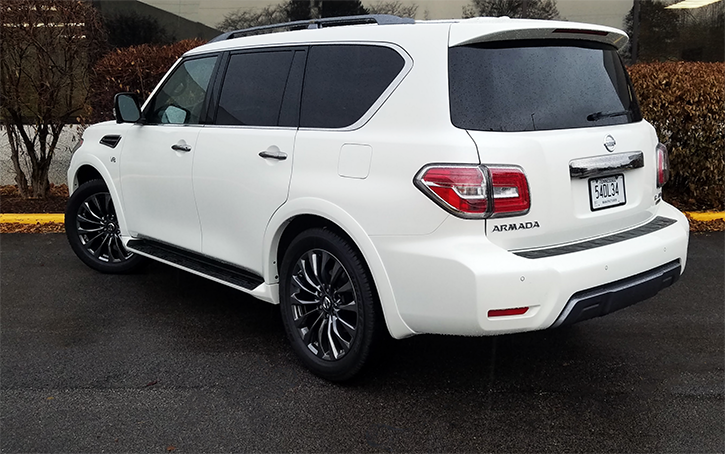 For 2020 heated power mirrors become standard on all models and there is a new 22-inch-wheel option. See what we mean? Steady as she goes.

There certainly was a familiar look and feel to the ’20 Armada Platinum with the Reserve option package that Consumer Guide drove. We took a turn in one in 2018, and save for the 22-inch wheels and second-row captain’s chairs that altered the seating arrangement on the current model, they were peas in a pod.

The Reserve package shoots up to $4500 (it cost $3000 in 2018) because it weds the big-wheel option to these carryover elements: dark-chrome-finish grille, door handles, exterior mirrors, and license-plate finisher; premium two-tone leather-appointed seats with contrast stitching and waffle-pattern centers; open-pore woodtone interior trim on dash and doors; and Platinum Reserve identification inside and out. The cabin remains as plush and padded as ever—and pleasingly quiet too. 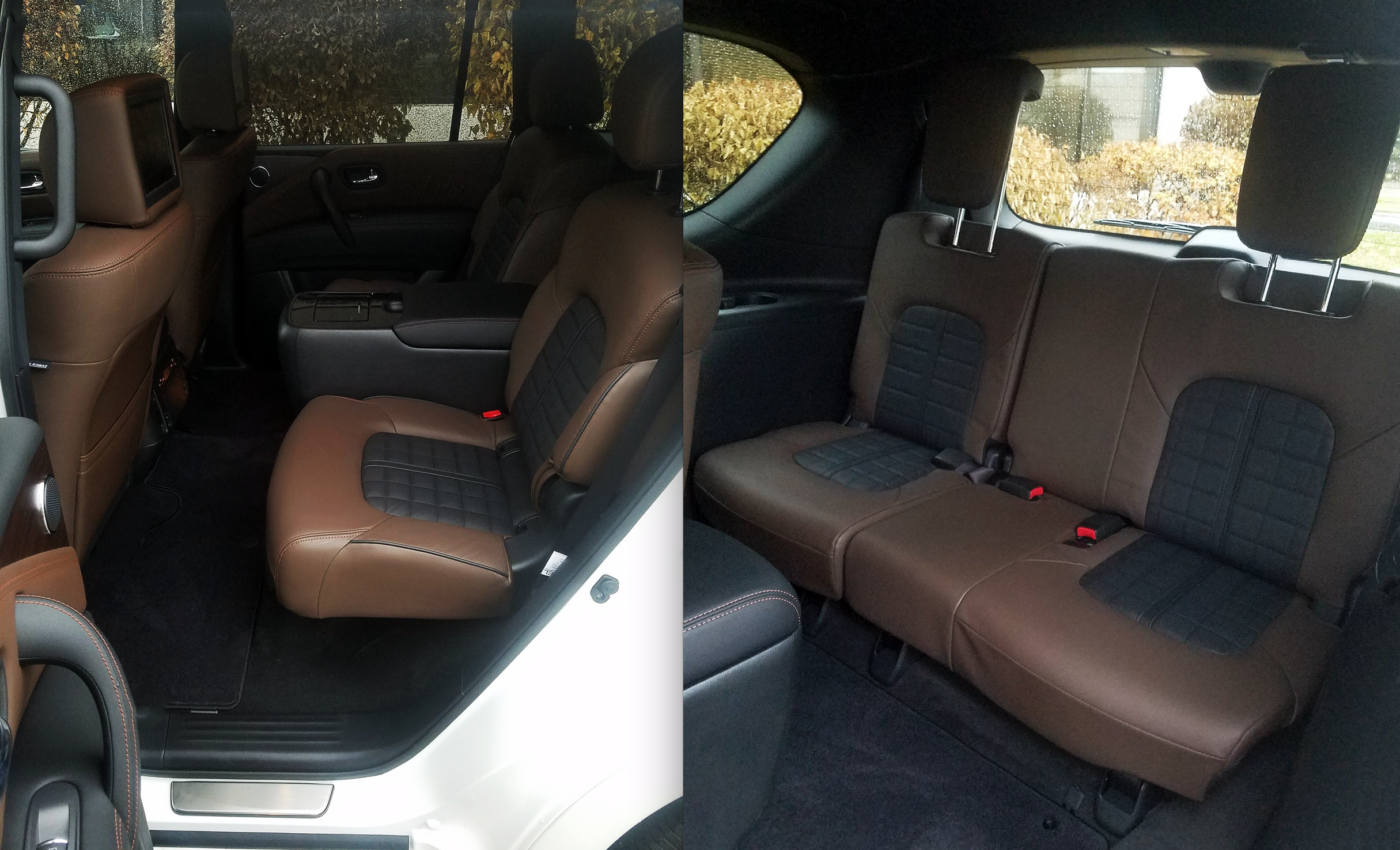 Second-row space is generous; the third row is a bit cramped for adults, but second-row seats fold and flip forward, creating a relatively wide passageway for easier third-row access.

Our assessment of the ride from the hefty body-on-frame truck isn’t fundamentally altered despite the bigger rims. (CG’s ’18 tester had 20s.) There was still a satisfactory degree of bump absorption, with few shocks transmitted to where passengers could feel them. Perched on a fully independent suspension, the Armada pitches somewhat in transitions and leans in corners, but rights itself without making the driver have to wrestle it for control through the wheel. Both of our Platinum Reserve Armadas had 4-wheel drive, which, in “Automatic” mode, delivers power to all wheels for starts, shifts to rear drive once up to speed, then distributes power front to back as needed in slick conditions or tight corners.

The middle-row captain’s chairs come in a $450 package that replaces the center seat (cutting passenger capacity to seven) with a center console with a padded top, sizeable storage bin, and twin covered cup holders. The remaining two seats are heated, and they easily fold and tip to clear a path to the third-row seats.

There’s 16.5 cubic feet of cargo space behind the third-row seats, which grows to 49.9 cu. ft. with the third row folded and a cavernous 95.4 cu. ft. with both the second and third rows folded.

Seating is cushy in the first two rows, but not as much in the third row. There’s better front legroom to be found in other vehicles in the class, but second-row space is good. A couple of adults in the third-row seats will need to strike a knees-up pose; it’s a zone better left to two or even three kids. Headroom is truly generous, especially in the first and second rows

A family big enough to fill all three rows of an Armada wouldn’t have room for a week’s worth of its groceries in the remaining rear cargo area. Retract the rear 60/40 seats, however, and lots more space opens up. Seat backs of the captain’s chairs drop nearly flat to create additional load floor, but the console sticks up a bit between them.

There’s no change to the powerteam consisting of a 390-horsepower direct-injection 5.6-liter V8 joined to a 7-speed automatic transmission with adaptive shift control and downshift rev matching. Response to the throttle is good and Acceleration is snappy. One thing that’s almost never the same twice is fuel mileage. The Armada is no ascetic—EPA fuel-economy estimates for the 4×4 are a mere 13 mpg in the city, 18 mpg on the highway, and 15 combined—and we’ve never hit those marks. This test resulted in our lowest figure yet, 12.48 mpg after 218.3 miles with 57 percent city driving.

The $64,925 Platinum on which the Reserve is based comes with most of the bells and whistles the Armada has to offer, but a lot of stuff requires a lot of controls for it all. Radio presets for the 13-speaker Bose system are fairly easily input through the 8-inch display screen, but the center stack of the instrument panel is awash in control buttons for audio, navigation, dual-zone automatic climate, etc. Small seat-heat dials rest far down at the bottom of all this, and a tiny, hard-to-see pinprick of  yellow light glows on the dial face when the heater is on.

One thing the Armada doesn’t have is Nissan’s ProPilot Assist “semi-autonomous” driving control—which would be right at home in product that seems to be driving itself.

It feels a bit dated next to its Chevrolet, Ford, and GMC rivals, and it gets plenty pricey in topline trim, but the Nissan Armada has its charms as a rugged full-size SUV that offers ample power.