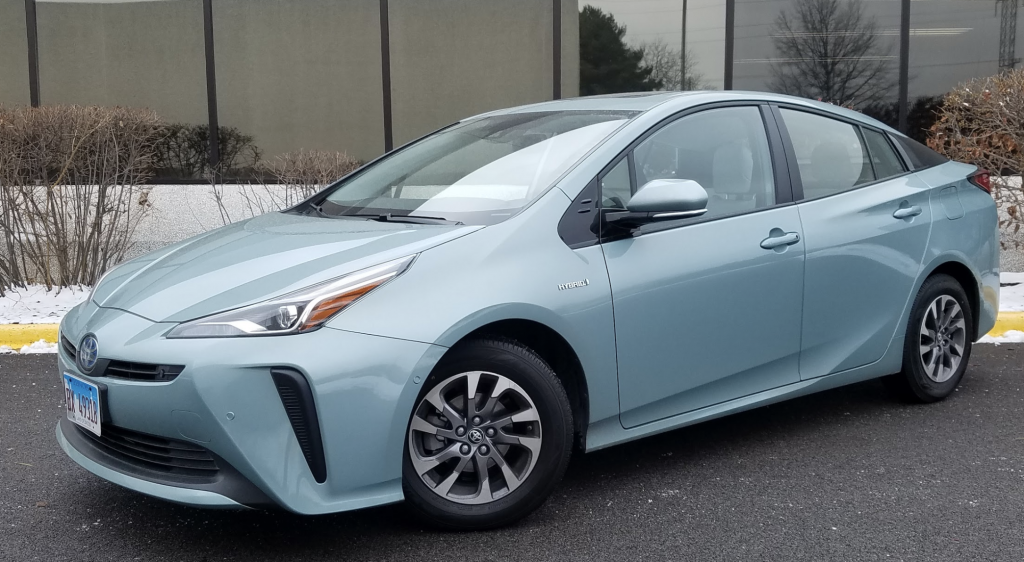 The not so good: Control layout, limited highway-speed merging and passing power

Toyota’s Prius is one of the original modern hybrids and long one of the best-selling. And though hybrids in general have lost the “green” spotlight to full electric vehicles of late, the Prius remains one of the most comfortable and practical fuel-misers on the road. 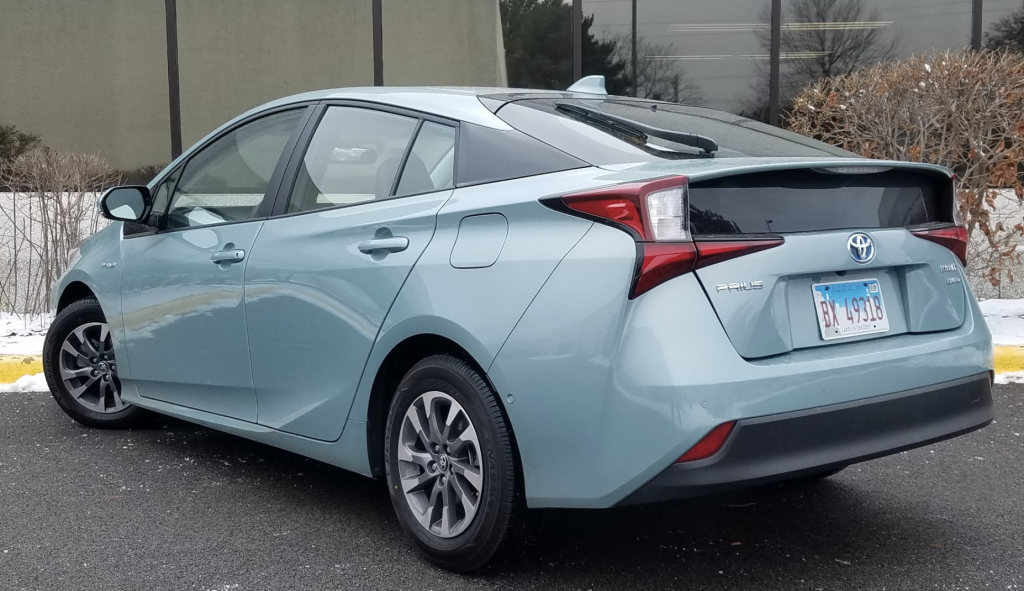 A “spoiler” divides the rear window (the black panel below it is glass) and can block some of the view back. Our tester wore optional 15-inch alloy wheels with taller-sidewall tires — part of the optional Premium Convenience Package — which replace 17s with lower-profile tires, likely aiding its very comfortable ride.

This one, however, didn’t prove to be quite as miserly as previous examples. We averaged “just” 45.3 mpg, the only Prius in recent memory not to break 50 mpg. Much of that was due to cold-weather driving and a very long highway trip that perhaps was covered at somewhat more than highway speeds (and the Prius gets better mileage in the city than on the highway), but none of our drivers managed to match the EPA figures … and we usually beat them.

The large, vertical touchscreen carries navigation map and controls up top, audio and climate controls at the bottom. It replaces rotary volume and tuning knobs with repetitive-step pushbuttons (though you can mix bands in your favorite channels, a nice touch), and traditional climate controls with a repetitive-step temperature pushbutton and virtual on-screen fan and mode controls — all a detriment to convenience. The screen and surrounding gloss-black trim panels created reflections in certain lighting conditions. This arrangement is exclusive to the top-line Limited model.

The line-topping Limited we tested comes with a large, vertically oriented 11.6-inch touchscreen and piano-black trim, both no doubt intended as “premium” features. But both reflected a lot of glare in certain light, and the touchscreen did away with volume and tuning knobs. In their place were repetitive-step flippers — which aren’t as convenient — though some redundant controls on the steering wheel helped. Climate controls were incorporated into the screen, which likewise made us miss more-convenient manual controls. The screen itself is split into top and bottom halves, the top hosting the navigation map and controls, the bottom the audio and climate controls. Overall, the more conventional controls found on the mid-level XLE AWD-e we tested last year were more to our liking. 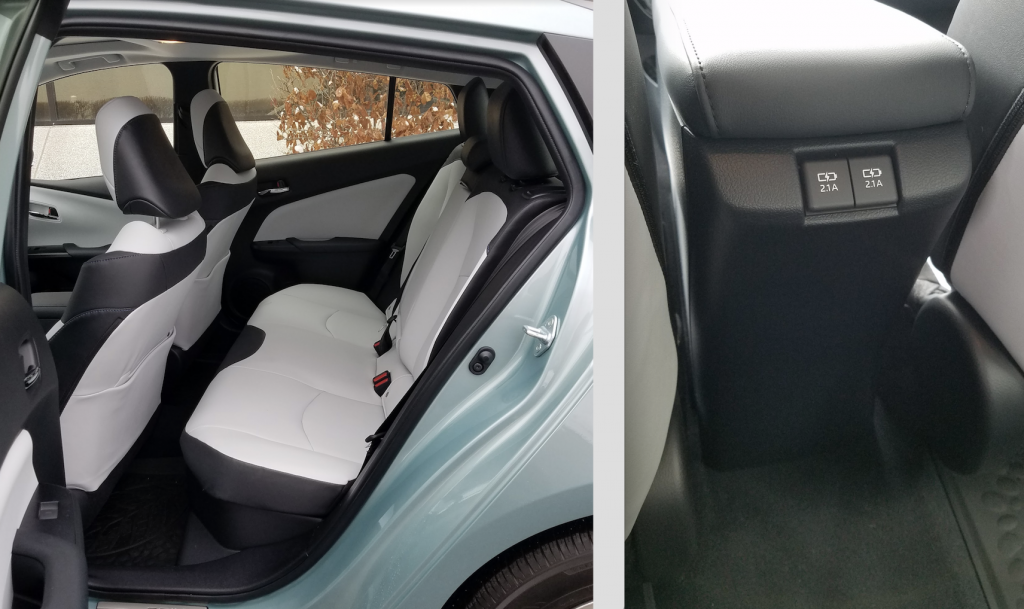 If the front seats are moved all the way back, legroom behind them gets very tight, but is OK with a normal-size driver in front. The rear-seat area hosts a nearly flat floor and two USB ports, but no rear-console vents.

But the Limited also includes some rather neat features some other Prius trim levels lack. Besides the aforementioned navigation system — which includes a premium JBL audio system — the Limited comes standard with a head-up display and adaptive headlights (they turn with the front wheels to illuminate around corners), though both are optional on the XLE. Also standard on the Limited are a fairly complete complement of comfort, convenience, and safety features, including rear obstacle detection, Park Assist, rain-sensing wipers, heated front seats and steering wheel, power driver seat with lumbar adjustment, keyless access and starting, and Qi wireless phone charger. Optional on our tester was the $515 Premium and Convenience Package with a power sunroof and 15-inch alloy wheels that replace 17s; yes, smaller-diameter wheels with taller-sidewall tires that likely contributed to the unusually comfortable ride. Oddly, while Apple CarPlay compatibility is standard on all models, Android Auto is not available.

Visibility is fairly good all around. However, a horizontal bar dividing the rear window can block a following car’s headlights (good) and also its turn signals (bad, as you might not realize it’s about to pull out and pass you). Passenger room is about par for the compact-car course, though rear-seat headroom is only adequate for those up to about 5’11, and legroom gets tight if a front seat is moved far back.

Although the sloped roofline cuts into cargo height at the back, the Prius’s hatchback body style is a boon to cargo space. The Limited’s folded rear seat backs rest a couple of inches above the level of the cargo floor, making it harder to slide long items forward; an XLE AWD-e driven earlier had a higher floor that was level with the folded seat backs, which we find handier. There’s just a bit of underfloor storage space, but it includes a defined “slot” for the cargo cover.

One of the Prius’s strengths has always been its hatchback body style and the cargo space it affords. On our test car, folded rear seat backs rested about two inches above the level of the cargo floor with limited space beneath the floor, though there is a holding slot for the cargo cover; in the XLE AWD-e tested earlier, the seat backs were level with the floor because the floor itself was higher, though that decreases available cargo height.

While we’ve found other versions more to our liking, the Limited still has a lot going for it as sort of a techy, luxury hybrid. And even though the Prius is no longer miles ahead of other hybrids, it’s still a competitive entry with an established history behind it.

Prius has long been the hybrid poster child, and it remains one of the best — if no longer the cheapest — out there. If you can get by without an integrated navigation system and premium audio — and the techy look of a big touchscreen — we’d advise a lower trim level than the top-line Limited tested, all of which have an easier-to-use control layout.