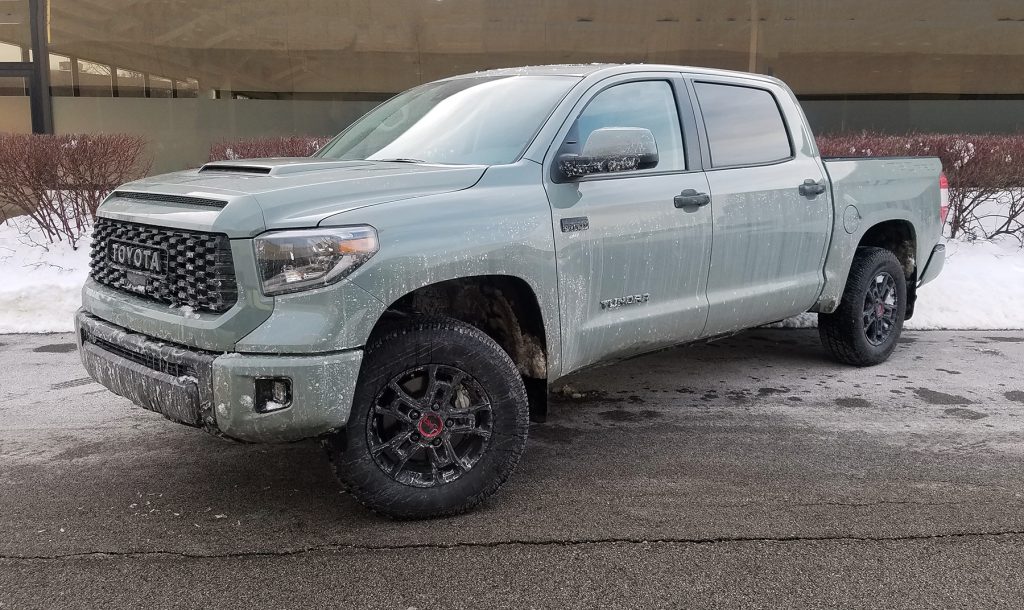 The not so good: “Trucky” ride quality; lousy fuel economy, even for the class; lacks most of the high-tech available features of domestic-brand rivals

If you had to guess, would you say Lunar Rock is: 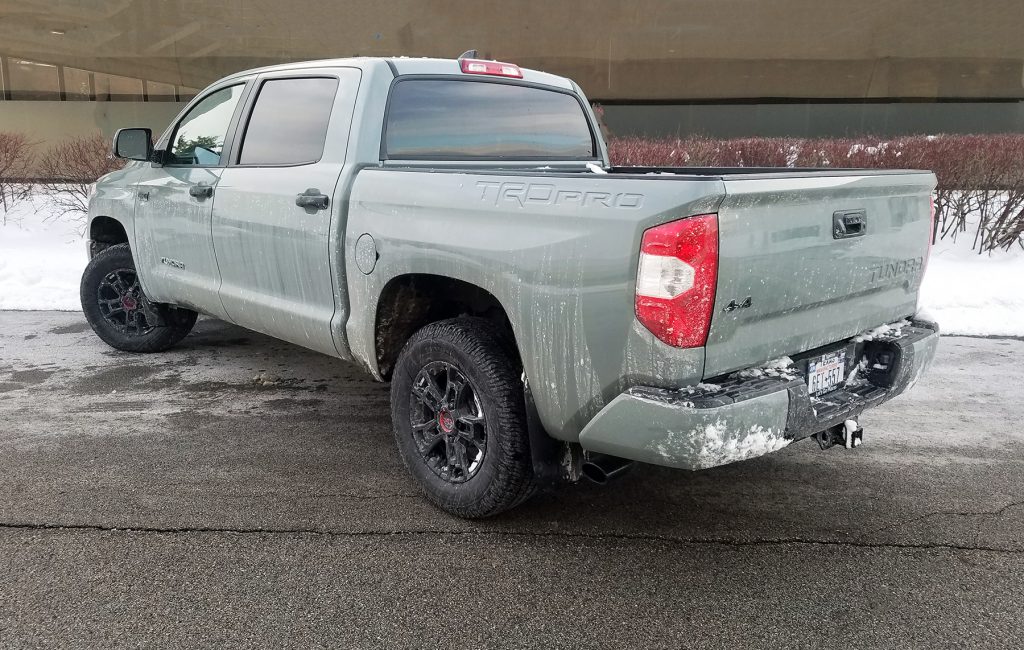 The TRD Pro sits at the top of the Tundra model lineup, alongside the ritzy Platinum and 1794 trim levels. Debossed “TRD PRO” lettering in the bed sides and an extra-burbly TRD dual-exhaust system are among the standard features.

Of course, the correct answer is “3.” As for the paint, you can find it on the Tundra TRD Pro, the most-off-road-ready large pickup currently in Toyota showrooms. The almost-pastel grayish green replaces Army Green as a TRD Pro color choice—and that’s about the biggest change (aside from a little boost in price) that’s been made to the 2021 model. 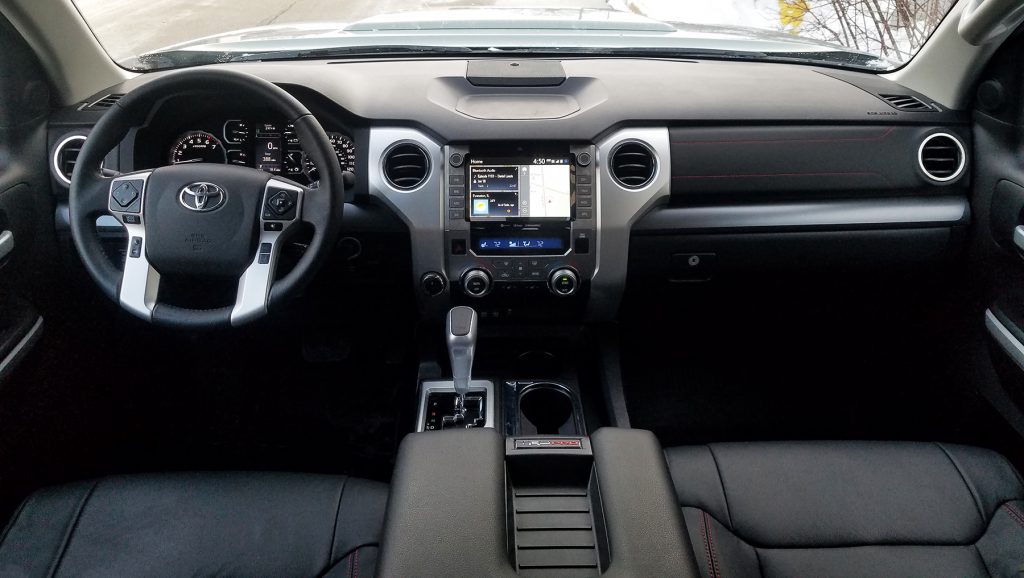 The Tundra’s dashboard layout is really showing its age compared to the newer designs of the rest of the large pickup category, but the controls are simple and straightforward, and the cabin’s build quality is high.

Both of the Tundra’s 4-door cab styles are available for the TRD Pro: The roomier CrewMax with 5.5-foot-long cargo bed and the Double Cab that trades some rear-seat space for a 6.5-foot bed. Consumer Guide tested a CrewMax that starts at $54,645 with delivery. (The Double Cab sells for $4275 less.) Only the addition of a spray-on bedliner pushed the total to $55,224. 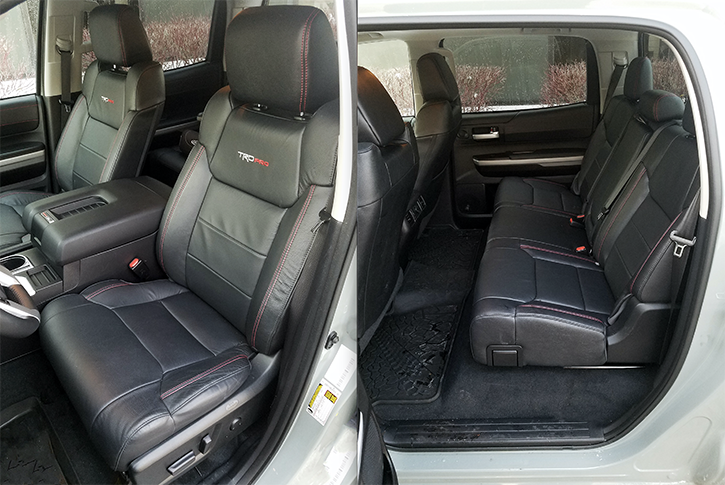 CrewMax passenger room is abundant in both rows, and the back seat easily hosts three adults. Step-in is fairly high, and without running boards or step rails that might interfere with operation in rough terrain, shorter passengers may find it a bit of work getting in and out. The seats are long-drive comfortable—and about the plushest things within considering that soft-surface areas in the cabin are limited to part of the tops of the doors, armrests, and the console-box lid. Interior storage is king-sized and well distributed throughout. Cushions of the 60/40-split rear seat flip up for extensive storage space on the floor. Operation of the standard premium audio system through the 8-inch touchscreen is uncomplicated. (Satellite radio, navigation, and Apple CarPlay/Android Auto smartphone compatibility are included.) The dual-zone climate-control system benefits from two convenient rotary dials for temperature settings.

The Tundra is offered with only one powertrain: a 381-hp “i-Force” 5.7-liter V8 paired with a 6-speed automatic transmission. TRD Pros come standard with tough-looking BBS-brand 18-inch forged-aluminum wheels.

As of 2020, Tundra’s powerteam checklist had dwindled to a long-serving 381-horsepower 5.7-liter V8 and 6-speed automatic transmission. No surprise for an off-roader, the TRD Pro driveline is electronically controlled 4-wheel drive, though an inconvenient part-time system. With 401 lb-ft of torque and an aggressive rear axle ratio, the Pro is eager off the line, yet cruises easily on the highway. A tromp of the accelerator is rewarded by prompt kickdown from the transmission and a “’scuse me, coming through” warning blast from the exhaust. Tow rating for the TRD Pro CrewMax is 9200 pounds, but the 170-pound-lighter Double Cab can pull an additional 700. While some distance away from big-pickup ride leader Ram, an unladen Pro still does all right for itself with its leaf-spring rear suspension. Driving it as they did toward the end of an especially snowy stretch with deep accumulations, CG editors found its 4-wheel drive undaunted by the conditions. The only worries were at the gas station where they were seeing 14 or fewer mpg from a vehicle that the EPA rates at 13 mpg in the city, 17 on the highway, and 14 combined.

The Tundra TRD Pro gets a unique grille insert with TOYOTA lettering, LED headlights with LED accent lights, Rigid Industries LED fog lights in the front bumper, and a TRD front skid plate. Blizzard-like conditions in Chicagoland during our late-February session with our test vehicle meant that we had a pickup bed full of snow for a couple days.

By the way, the Tundra TRD Pro also comes in Super White, Magnetic Gray Metallic, or Midnight Black Metallic—in case you’re not over the Moon for Lunar Rock.

The special features of the TRD Pro model add to the appeal of the Toyota Tundra, as does Toyota’s reputation for quality and reliability. However, this truck’s basic design is well over a decade old, and it’s really showing its age compared to domestic-brand rivals that offer better fuel economy and scads of innovative, cutting-edge features. An all-new generation of the Toyota Tundra is in the works, and it’s scheduled to debut as a 2022 model. 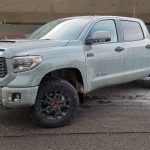 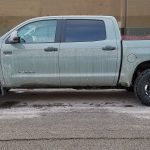 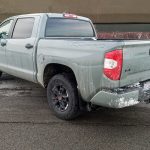 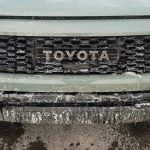 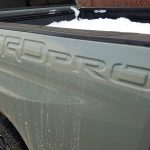 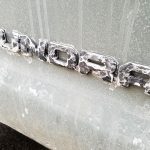 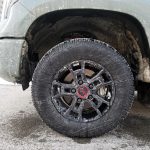 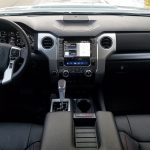 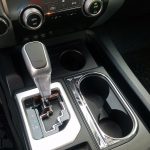 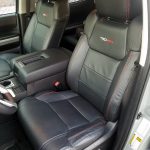 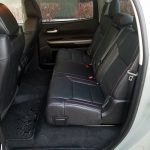 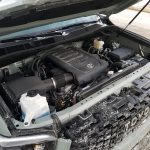